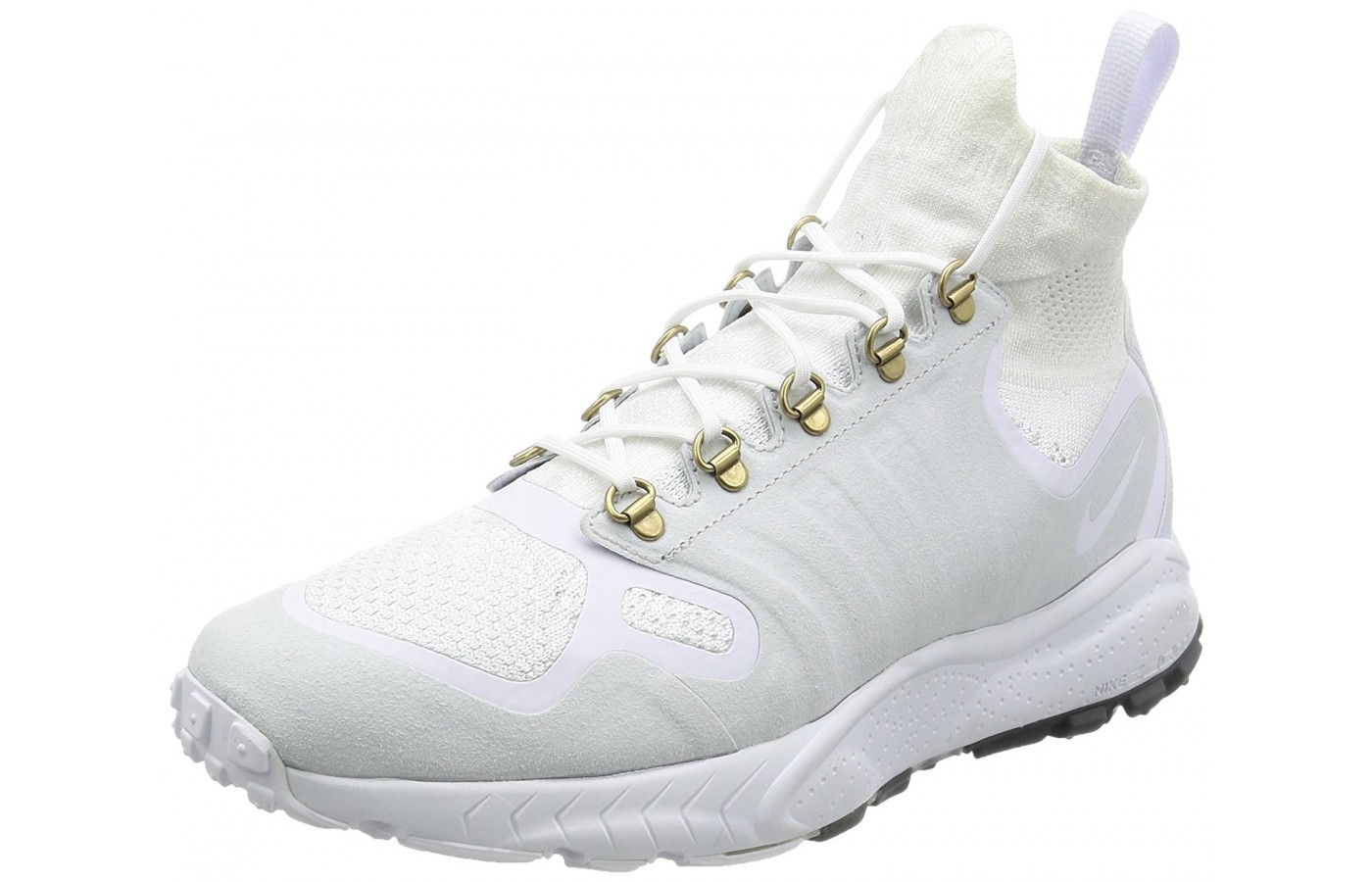 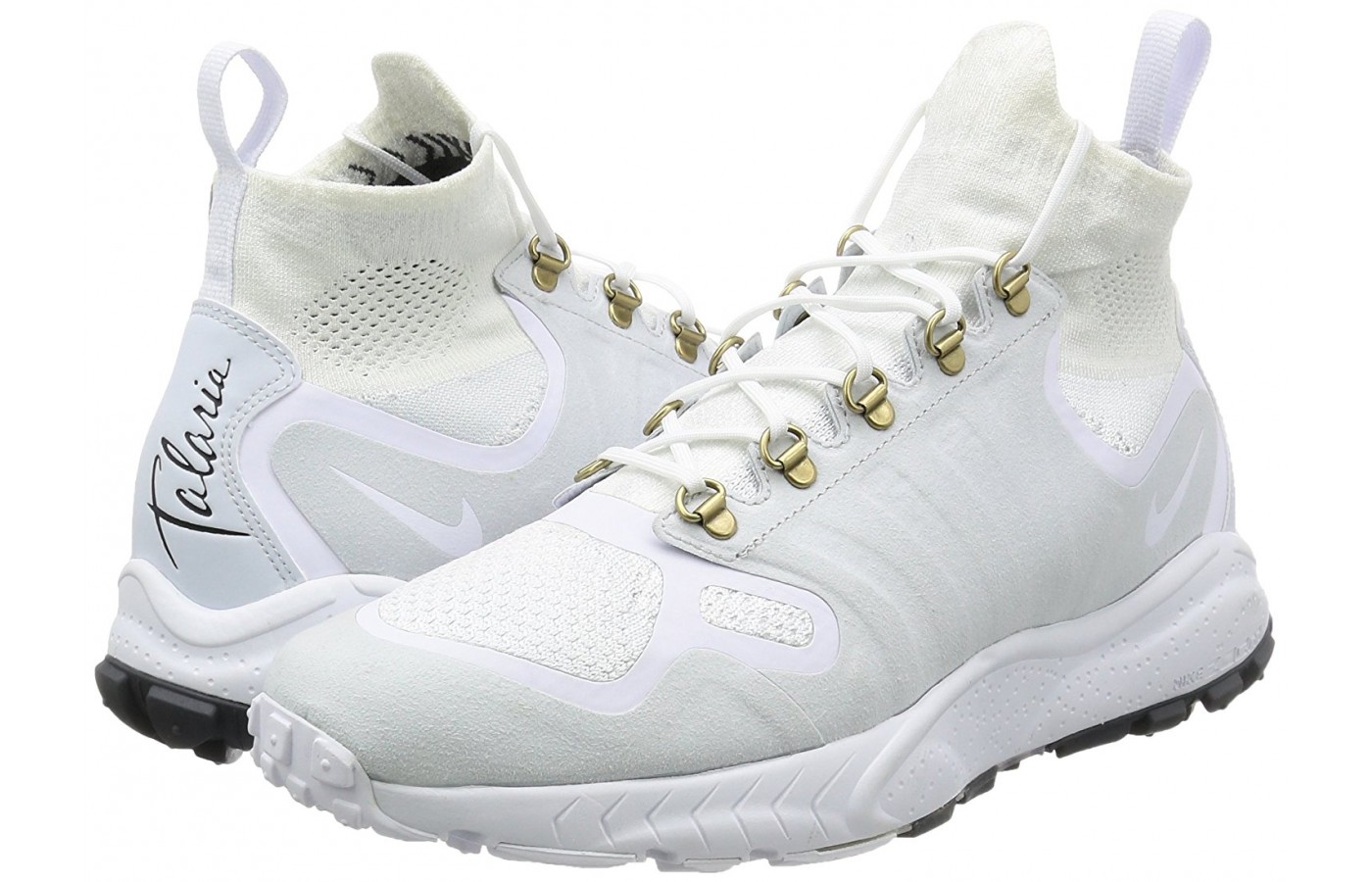 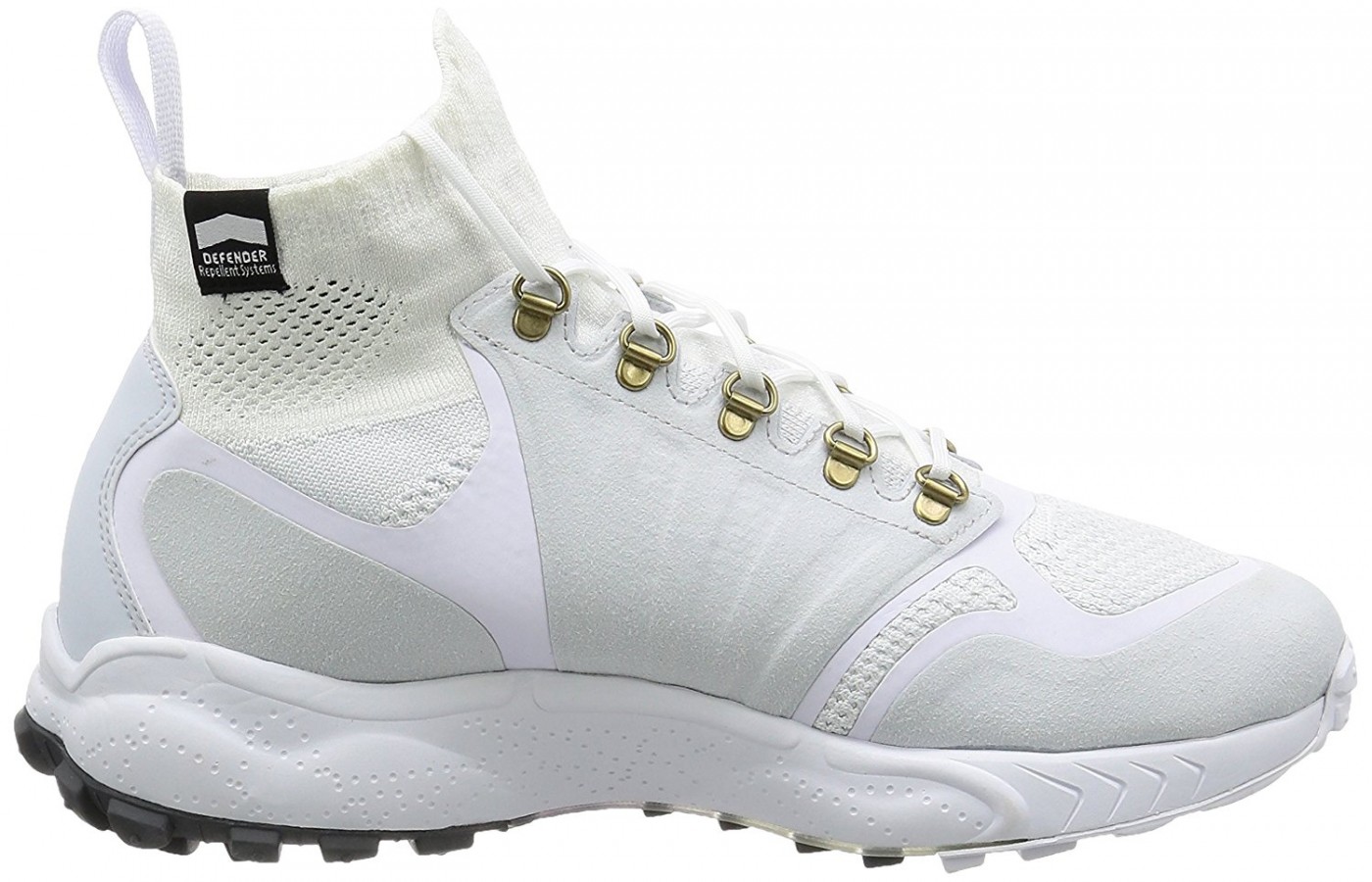 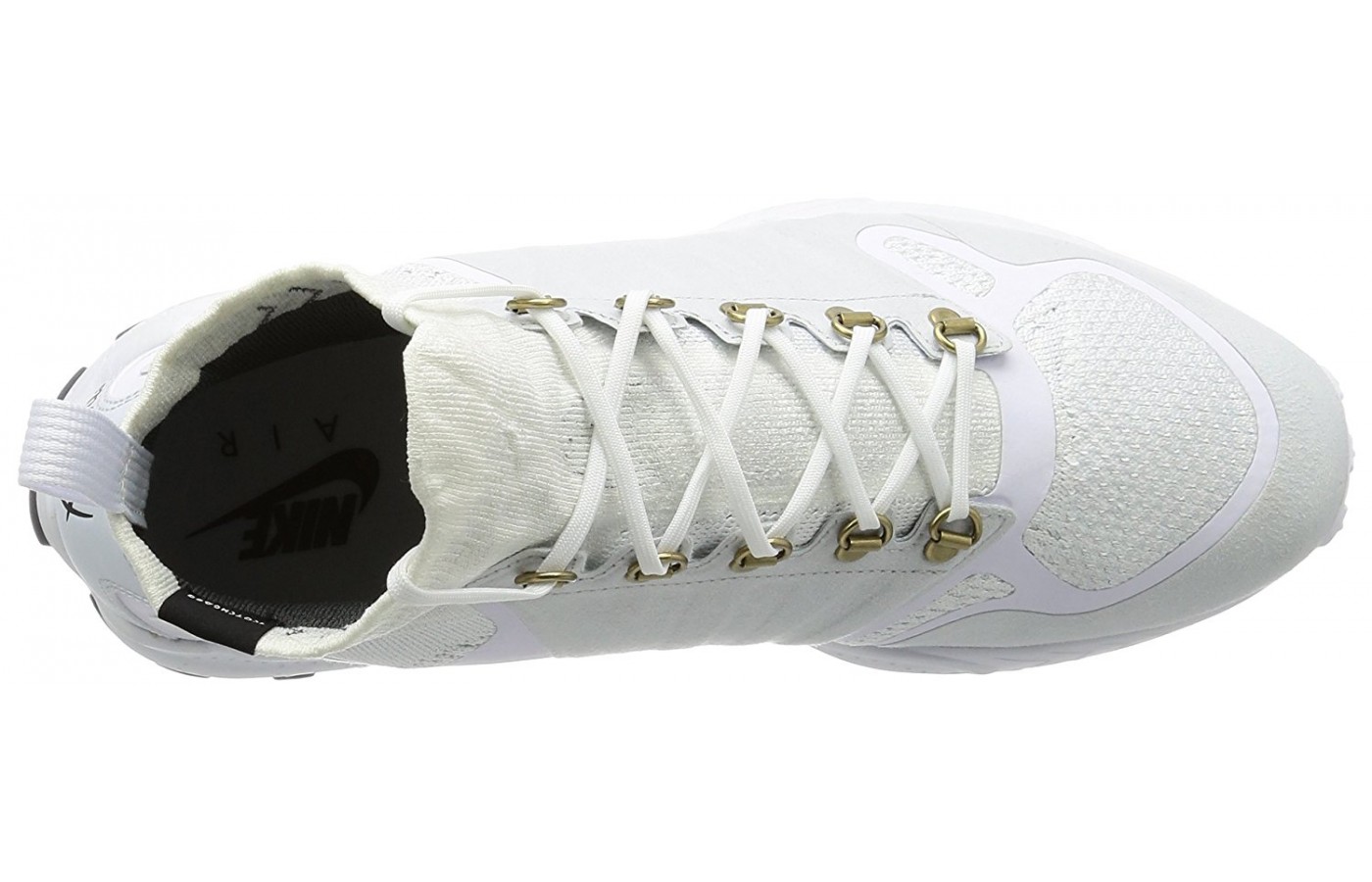 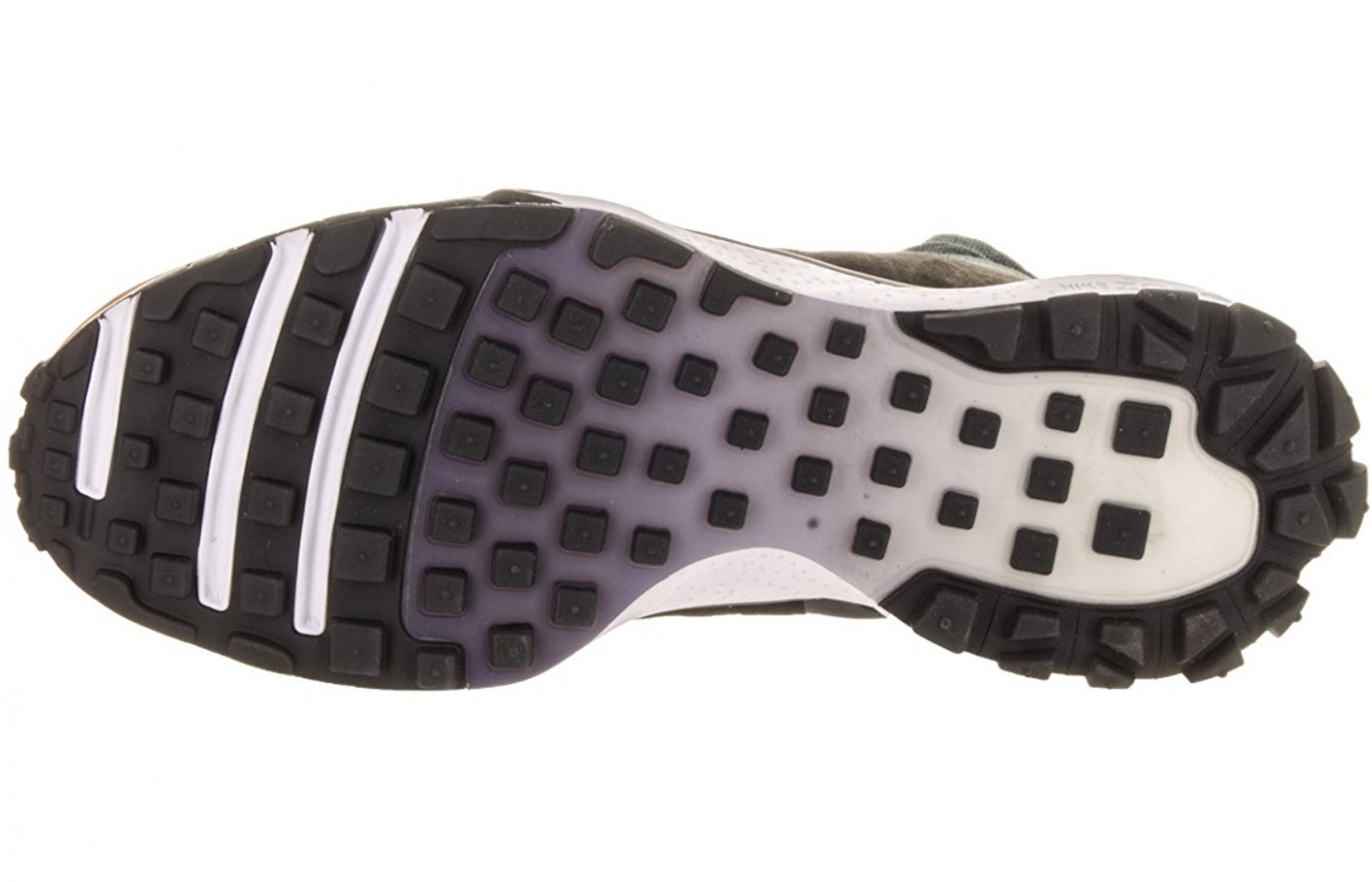 8.1
8.1 score
(WalkJogRun) score (8.1)/10
Our WalkJogRun score is based on 3 different factors: Editor's rating after in-depth testing. User ratings submitted on this page Overall score from the "reviewmeter" based on reviews across the web the weight of each factor is: 40% editor rating 15% user ratings 45% reviewmeter.
0
Editor rating: 7.8 / 10

It’s been 20 years since Tinker Hatfield helped create the Nike Zoom Air Talaria original which was released in 1997 but, its popularity remains strong enough to have a full revival in March of 2016. This golden throwback was the evolution of the incredibly responsive cushioning technology 2 years prior to Talaria Zoom’s unveiling. The revolutionary design including flex grooves and extensive padding made it a cult classic for a reason. Among the plethora of recent renditions, the Talaria Mid Flyknit seems to be a favorite. It manages to appease the original aficionados and the people who wanted something new. It’s a great blend of both worlds without losing any of the style and comfort that the Zoom is known for.

We have spent 3.5 hours analyzing a total of 400 reviews.

Positive
Read more
Negative
Read more
Reviewmeter
The Reviewmeter shows you an overall score that you can easily refer to. The highest rating is 10 (100% positive feedback)
Of the 400 reviews we found in total, 22% were negative, and 78% were positive.
7.8
1
5
10

The minds behind Zoom were insistent that any new tweaks wouldn’t compromise the basics. The Flyknit has an aggressive thick outsole that houses all that wonderful cushion that sustained athleticism can often depend on, as well as the trusty flex grip to alleviate foot stress that can occur when there is uncertainty of slippage.
The midsole is made of PHYLON which is comprised of compression molded EVA pellets (a combination of 2 heated and cooled plastics) that can be molded in a variety of ways. What’s important is the ratio of the two plastics. Lower quality shoes will have the ratios that allows the midsole to be too brittle and eventually begin to crumble. Higher quality shoes, on the other hand which the Flyknit clearly is, will have more certainty of a longer life span, and that is good for your feet and your wallet.

The tongue of a shoe may not seem like an important aspect but, it’s a detail that can infinitely change the wearer’s experience; positioning and curvature as well as the fabric is key. The Flyknit material has great suppleness and breathability and molds perfectly over the bridge of the foot for optimal comfort and security.
The minds behind this new version of the Zoom have also added another distinction some find questionable; D-ring lace eyelets offer a more rugged appearance. Instead of the usual cotton shoelaces, the Flyknit’s are sturdy, flat and frankly actually look like they wouldn’t dig in through the tongue if the wearer needed to tie the shoes tightly.
The high plush ankle collar with sock like extension provides extra support and protection from negative weather, as well as giving it that quintessentially unique appearance.

Despite being two shoes in one, the Flyknit isn’t burdened with both the weight. It’s surprisingly lightweight but retains the sturdiness of a boot. The Flyknit again manages to find a balance between strength and agility, primarily because of the distinct cushioning. The addition of the Flyknit material that wraps around half the shoe, helps lessen the assumed bulk, which is great because nobody wants to feel like they have to drag their feet.

No stinky feet or rashes are on the horizon with the Flyknit’s design. Most of the upper part of the shoe is covered in the special Flyknit material, which like its namesake, is like a very fine, very strong mesh weave that runs from the upper toe, up the tongue and around the collar to allow for great ventilation without costing heat insulation. There are even tiny air pockets clustered on both sides of the collars sock extension as well as the length of the tongue. This is incredibly important for any athletic footwear to achieve and it’s one the greatest advantages this version of the Talaria has against the competition.

Let’s be honest, Talaria’s airbag is the best part and thankfully the Flyknit didn’t innovate away from this feature. The ¾-length Zoom air bag cradles most of the foot and absorbs any shock while insuring incredible, sustained comfort through intense sprints or long games. The thick ankle collar with extra padding in the back to inhibit chafing is another feature. Soft sock extension, flat shoelaces and a pull tab on the back to help put the shoe on are a great bonus. The interior is also supposed to feel like the wearer is slipping on a pair of socks and so far, the designers seem to have succeeded.

One of the reasons the Flyknit has fans abuzz is how admirably it marries the signature elements of wearing boots with the ease and convenience of athletic shoes. Unlike the Air Talaria wolf grey, which one reviewer likened the appearance to a dad shoe, the Flyknit keeps the retro vibe and adds a healthy dose of modern urban appeal. Most of the Flynet comes with leather embossed around the toe box and wrap around the heel and a wide spectrum of colors as well as choice between treated leather or suede. There are version of the Flyknit’s shoelaces, of which there is an extra set, also come equipped with removable tips that can be exchanged for different colors that come in a little bag in the box.

If your shelling out a hefty amount for a pair of shoes you want to know that they are going to last, and the Flyknit can definitely check that box. Tough Flat black laces and the outsole’s thickness and wide spaced flex grip promises a sturdy shoe. The combination of the treated leather or suede with strong overlays increases the durability and longevity of the shoe. Since the Flyknit is a relatively new release it’s difficult to say how long it can really last, especially if it’s not being used as a running shoe, which is typically replaced twice a year for regular joggers. Since the Flyknit is generally more for leisure or sports activity the durability so far is relatively strong. This might be a relief for those who don’t have a heavy turnover rate for sneakers, especially considering the Flyknit’s price tag.

The base layer of Flynet is taped over with heavy duty material so no seams appear, which offers extra fortification and guards against the cold and wet. The Flyknit is also heavily treated with scotch guard. For further protection, the tongue even has a little pocket that can be opened with a snap so the laces don’t drag in the rain or snow. This is an ingenious idea that will be a nice little surprise for anyone and would frankly be a great addition for every shoe with laces.

According to Nike, PHYLON, the material used for the midsole, is “lightweight, low-profile and responsive". Martyn Shorten, biomechanics expert and head of the Runner’s World Shoe Lab, reports that the average sneaker made with EVA tech falls in the 50 to 60th percentile in energy return from the shoes sole when it hits the ground. Newer, fancier foams are hitting a whopping 70 percent, which is what the Flyknit is fitted with, so even if you aren’t using these shoes to run in, it sure is tempting.

One of the benefits of wearing sneakers is the ease and support they provide, and Flyknit Talaria doesn’t skimp in this area either. The plush high ankle collar and sock extension offers snug support and ample comfort. Extra stability and security are provided by the flex grip tech and the thick midsole. Fitness magazine even put the Nike Zoom as one of their top 12 best support shoes which is a great recommendation.

The special dual design of the Flyknit allows it to be usable during a mild hike or on the court. They are the shoes to take if you want to be able to slip them on without having a plan. These shoes are great for walking through the rain or enjoying a trail in a forest. The Talaria Flyknit is tailor made for nearly all weather and terrain.

Finding affordable good quality athletic shoes for a bargain isn’t always easy and unfortunately these are decidedly upscale. Although, the upside is that there seems to be a consensus that they are worth it. There have been a few sites with great sales of about eighty dollars but on average most retailers sell them for one fifty to two hundred dollars.

In line with the overall rugged design, the Flyknit has rubber outsoles akin to cleats which allow it to nearly be categorized as a leisure hiking boot and can make walking on snow and ice a lot less scary. The material allows them to have equal grip strength when walking on pavement or any indoor smooth floor. Unless there is any shoving involved, wearing these should allow your feet to stay firmly planted.

Nike’s designers paid special attention to how the shoe bends and aligns with the newer versions of the Talaria. Three horizontal lines attached to the forefoot, significantly help maintain flexibility, which is very helpful in balancing a shoe that has a thicker midsole that the Flyknit is known for. That thickness is necessary because inside is the famous Zoom airbag that insures these shoes give feet such a sweet ride. Along with the light PHYLON tech, there is the superior quality of movement without excess weight.

On most polls, shoes containing the Nike Air Zoom tech usually rank in the top 10 in stability and the Flyknit is no exception. It has the cushioned midsole for any type of foot but, the structure and arch support favors those with moderate overpronation. So, for those folks out there who need further arch support it might be necessary to purchase an insert, which incidentally might be extra helpful because most versions of the Flyknit tend to run big, and this might help give you the snug fit that you’re looking for.

Drop is essentially the height difference between the front part of the shoe and the back on the inside. Apart from strongly held opinions and anecdotal evidence there isn’t a lot of available research on the merits of how much of a difference drop makes in the performance of a runner. What some studies do tentatively conclude however, is that higher drop might equal more risk of injury in regular runners, making it more suited for occasional runners. Nike doesn’t say what the exact drop the Flyknit has but, reviewers have mentioned that the heel does feel a little higher. This is good news for wearers that simply walk or play sports in them but, for anyone wanting to buy these as your new running shoes it probably isn’t the safest bet.

The Nike Talaria Mid Flyknit has not only been revamped to new life, but it is a reliable and long-lasting design of one of Nike’s most unique styles that lives up to the hype. Because the Flyknit shoe is really an artful amalgam of two types of shoes, the higher price doesn’t sting quite as badly. Keep in mind there might be some retailers that will sell at a bargain. Overall the pros vastly out way the cons so, if you are looking for a great shoe that looks unique, can survive most weather and hits its stride on nearly any flooring, indoor or outdoor, then the Flyknit is a great choice. 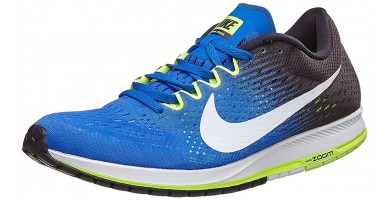 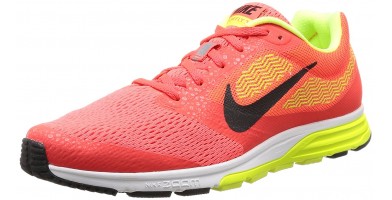 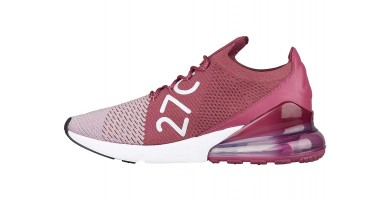