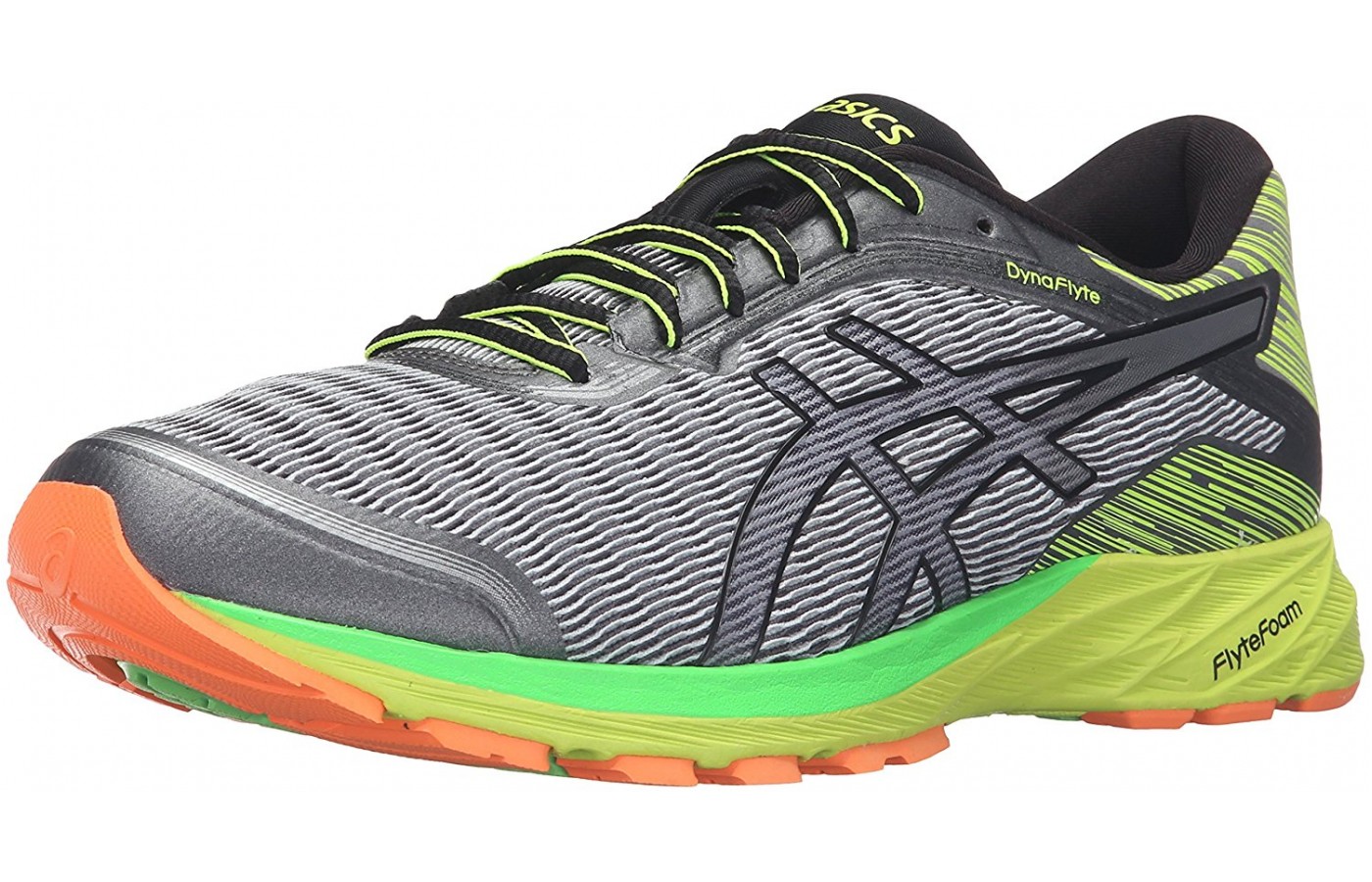 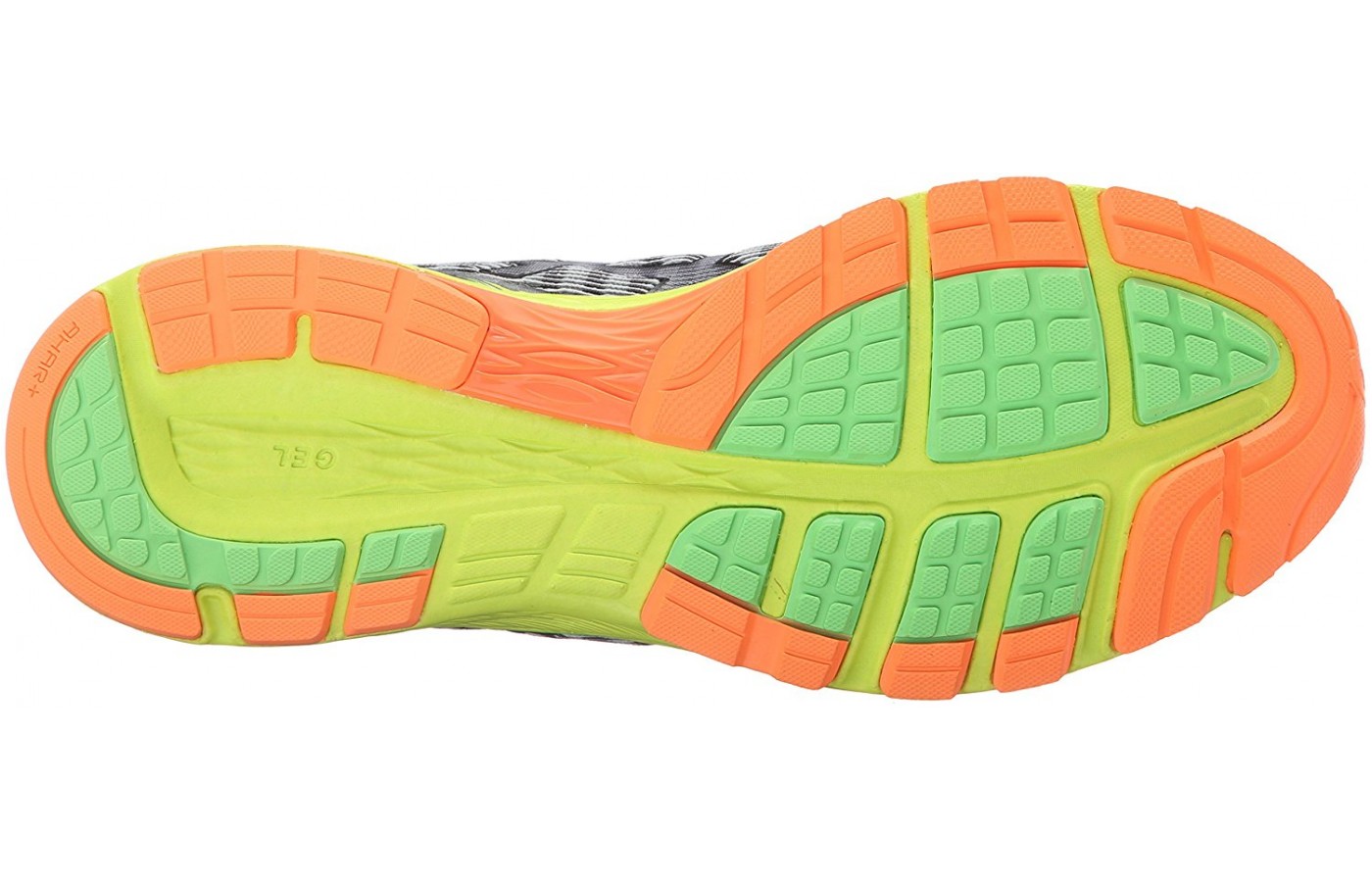 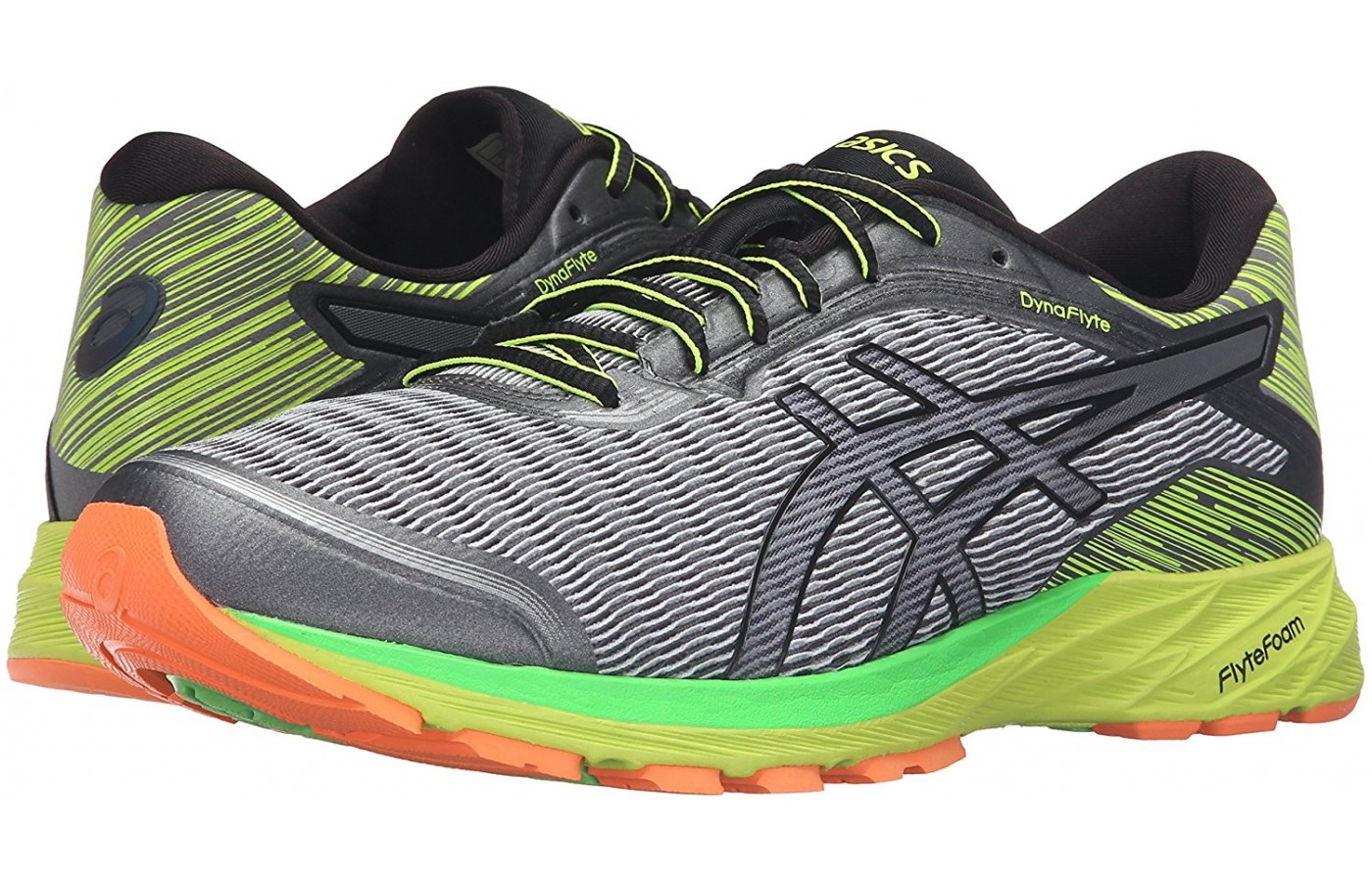 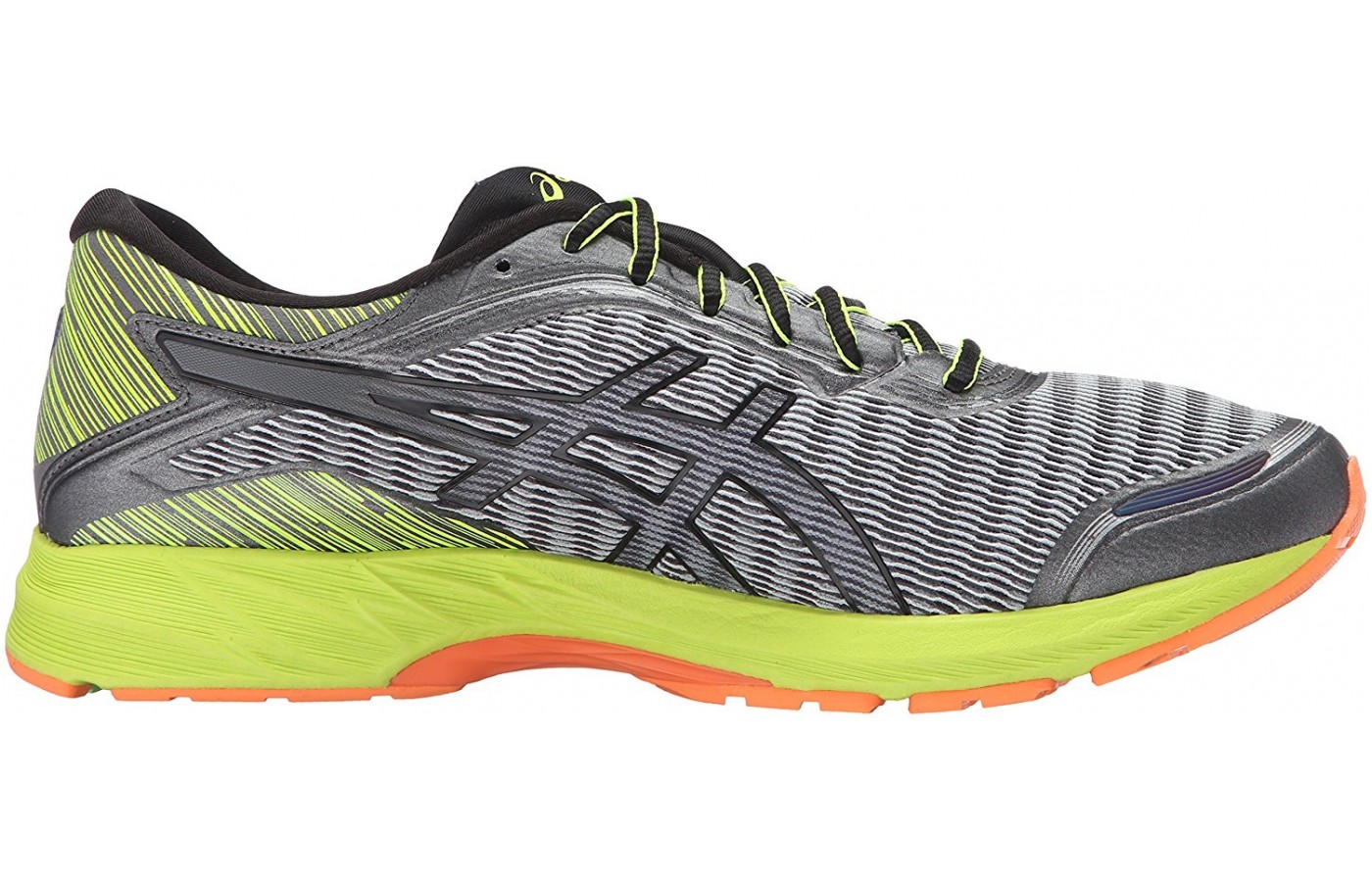 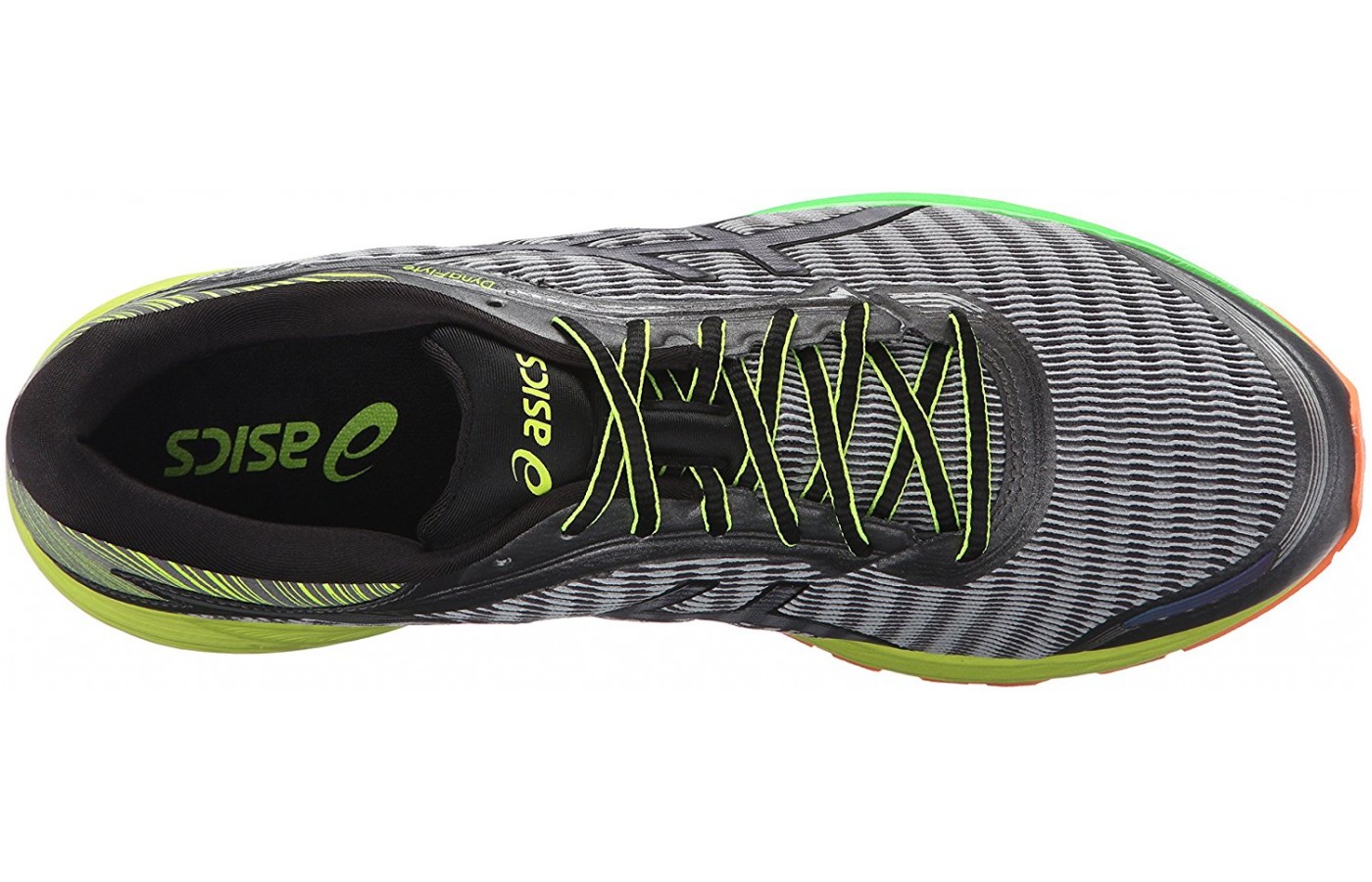 The Asics DynaFlyte is Asics model of a shoe that balances both the need for a lightweight shoe and a a shoe with a decent amount of comfort. Released in July 2016, the shoe holds several technologies that improve the overall experience of the shoe. These technologies range from the foam that makes up the sole unit to the mesh that is the upper of the shoe. Aside from the added comforting and lightweight effects that the shoe has been equipped with, it also provides a decent amount of support for the runner.

The outsole of the Asics Dynaflyte, like a majority of shoes on the market, is designed from a hardened rubber material. This by itself aids the shoe in its ability to handle a variety of terrain types. The rubber itself is fashioned into a tread pattern, which is also partly to thank for the shoe’s ability to handle the variety of terrain types. The tread pattern on the sole doesn’t allow for much overall flexibility in this area of the shoe, which can be noticed by the lack of flex grooves placed in that area. A fascinating thing about the tread pattern is that, unlike the usual tread patterning that shoes are equipped with, this shoe is fitted with it in specific areas of the outsole. The edges of the outsole are fitted with different a patterning while the inner area is where the shoe is given the squares that the tread patterning is known for.

The midsole unit on this shoe is where the majority of the magic happens. The Asics DynaFlyte features a midsole that is fashioned after their famous flytefoam, which is great for overall comfort and provides a decent amount of responsiveness to the shoe as well. The flytefoam itself is overall pretty dense which also aids the shoe in its efforts to perform well on the rougher terrains. Despite the denseness of the foam, it is relatively light, something that Asics engineers should be thanked for. Overall, the midsole is very comfortable on this shoe, and the Flytefoam material is what’s to thank.

The upper on the Asics DynaFlyte is honestly something else. It’s designed using the same mesh material that a majority of other shoes on the market use, the only difference is that the upper on this shoe is substantially lighter than other shoes of it’s caliber. There is a decent amount of cushioning placed throughout the upper of the shoe, which should do a decent job of weighing the shoe down, but it just doesn’t happen. There are a decent amount of coverings placed throughout the upper of the shoe such as on the sole and heel area of the shoe as well.

As Asics said when they first mentioned the shoe, this shoe is designed with speed in mind. That means that the material on the shoe is made to fit with the shape of the foot and is relatively lightweight. The shoe is designed out materials that take a substantial amount of weight off of the overall shoe. The sole, being designed from their flytefoam is relatively lightweight and, paired with the mesh upper creates a shoe that is almost nonexistent when on foot. The shoe weighs in at a surprising 9.3 oz for a size 11, which is actually pretty lightweight.

The upper of the shoe provides a decent amount of air flow to come in and out of the shoe. The Asics dynaflyte features a mesh upper which like the majority of shoes on the market that use this material makes a very breathable shoe. The one thing that can be said about this shoe is that the material that makes up the upper, namely the sock liner, somewhat takes away from the shoes’ inherent breathability. The shoe feels somewhat hot on foot which, over time can result in a very uncomfortable situation. This is just something to keep in mind for the person who is looking for a long-distance running shoe but looks to avoid the uncomfortable sweaty situation that results from extended use of the shoe.

The shoe is known for two things, being lightweight and its overall comfort. The shoes’ flytfoam that makes up the midsole of this shoe is great because of its ability to handle extended periods of use without losing the bounce that it’s known for. On top of this, Asics made sure to fit the shoe with solid arch support which, for longer distance runners, is a real plus. The upper of the shoe itself is made of mesh, and a very cushioned mesh at that. The mesh that makes up the upper of the shoe is cushioned to the point of feeling almost non-existent while on the foot itself, also aiding in the overall comfort that is provided to the wearer.

The Asics dynaflyte is not the most stylish shoe in the world. Asics tried to make a stand with this shoe and designed it with extremely gaudy colors which, while running isn’t bad at all. The gaudy colors of the shoe do take away from its ability to be worn for casual use though, meaning that it would be extremely hard for the wearer of this shoe to pair them with anything outside of an athletic garment. The addition of coverings over the heel and toe area on the upper of the shoe also take away from the aesthetic appeal of the overall shoe, again, not bad for use while running, but in casual wear it doesn’t really help. Overall, while the shoe isn’t the most attractive shoe when worn with a pair of jeans, it definitely helps while on the trail or on-road.

Although the main focus of this shoe was to make something that was both lightweight and comfortable, Asics made sure to also create a shoe that was durable as well. The outsole on the shoe, being designed of hardened rubber doesn’t wear down as quickly as one would think. The midsole is also able to withstand a decent amount of pressure without losing its initial bounce, which is a good thing because of the long distance nature of the shoe. The upper on the shoe, being made of mesh, is able to flex with the users foot without wearing down quickly or breaking off, which is another sign of a durable overall shoe.

The Asics DynaFlyte is lightweight and has been designed with a variety of materials that boost the protection that the shoe provides to the wearer. The sole of the shoe is relatively thick and dense, which enables the shoe to be able to handle being used in the rougher areas without the user having to worry about being damaged by things that are laying around. The upper on the shoe, while being relatively thin, is layered to the point that the material isn’t the easiest thing to break through. The upper also features a few plastic guards which also provide protection to the user of the shoe.

The midsole on this shoe is nothing if not responsive. The flytefoam that it is made of is designed in such a way as to be able to take the pressure that is placed on it and send it back out so that it provides a bounce during the ride of the overall shoe. The shoe itself is designed with being lightweight in mind, which enable the shoe to respond to the desires of the user’s foot with little to no issues. The combination of the flex in mesh upper and the flytefoam midsole allow the shoe to provide a decent overall ride for the user of the shoe.

The support on this shoe should make the majority of long distance runners appreciative for the Asics brand. The midsole on the shoe being designed from Asics’ flytefoam technology is dense enough to provide a decent amount of support for the wearer of the shoe; they really packed the material into the heel of shoe which provides the wearer with an even greater amount of support for that area. The shoe is designed with the neutral runner in mind which means that the shoe provides greater support for runners with neutral arches. Overall, if the runner of the shoe is looking for a shoe that provides decent amount of support, that is also a bit on the denser side of things, the Asics DynaFlyte would be a great choice.

While the style of the shoe is very creative and does a great job of benefiting the wearer in many areas, it isn’t the best shoe when one is looking for versatility. The sole of shoe has great traction gaining abilities, this is true, but the sole lacks several of the key elements that a shoe of its caliber would need if it were to be able to withstand the harsh rural trails. While the sole is a bit on the toucher side itself, it just doesn’t have the grip necessary to handle the surprises that come with the trail itself. The midsole is a bit on denser side, so the wearer shouldn’t have an issue with the possibility of rollover or missed footing. Overall, while the shoe has great handling abilities, it’s best when used on roads and not in the more rural landscapes.

For the technologies that the shoe provides, the Asics DynaFlyte is accurately priced. The Asics DynaFlyte comes equipped with a decent amount of comfort and is relatively lightweight, which more than justifies the relatively low price tag that the shoe comes equipped with. The mesh material that makes up the upper of the shoe is also well manufactured meaning that the user wouldn’t have to worry about replacing it anytime soon. This means that the shoe holds a decent amount of value inside of its lightweight frame.

The flexibility that the shoe provides is decent, not the best by any stretch of the imagination. The mesh upper on the shoe is, as mesh is known to be, relatively flexible; this means that the material will be able to bend to the will of the users’ foot with little to no problem, mainly because of the materials’ nature. The sole on the shoe is relatively stiff when compared to the flex that the upper provides. There are very few flex grooves on the sole of the shoe meaning that it will be unable to move along with the movements of the users’ foot. There is however, a decent amount of movement provided in the toe area of the shoe. The midsole, while being pretty responsive has limited range of motion due to the lack of movement that the sole of the shoe provides.

The drop on the Asics DynaFlyte is exactly 8mm. The mid-range heel-to-toe ratio that this shoe is equipped with gives it a decent overall ride, mainly because of the smooth overall transition that the shoe provides.

Overall, the Asics DynaFlyte was well manufactured, something that is not new to Asics' line of shoes. The mesh upper on the shoe does a decent job of providing a comfortable and snug-fitting shoe to the wearer. The price tag on the shoe is justified by the overall feel of the shoe. On top of all of these things, the shoe does a decent job in providing a lightweight, supportive feel for the wearer. Great job Asics. 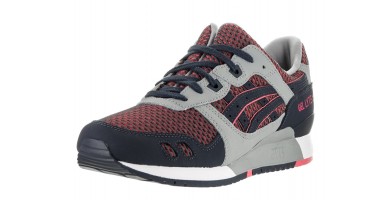 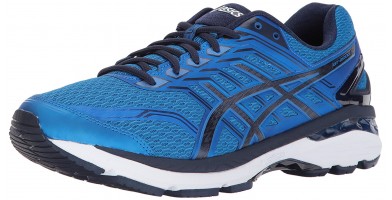 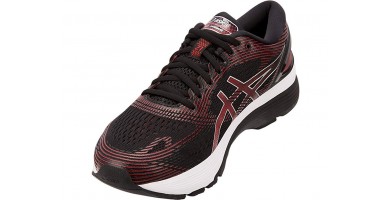