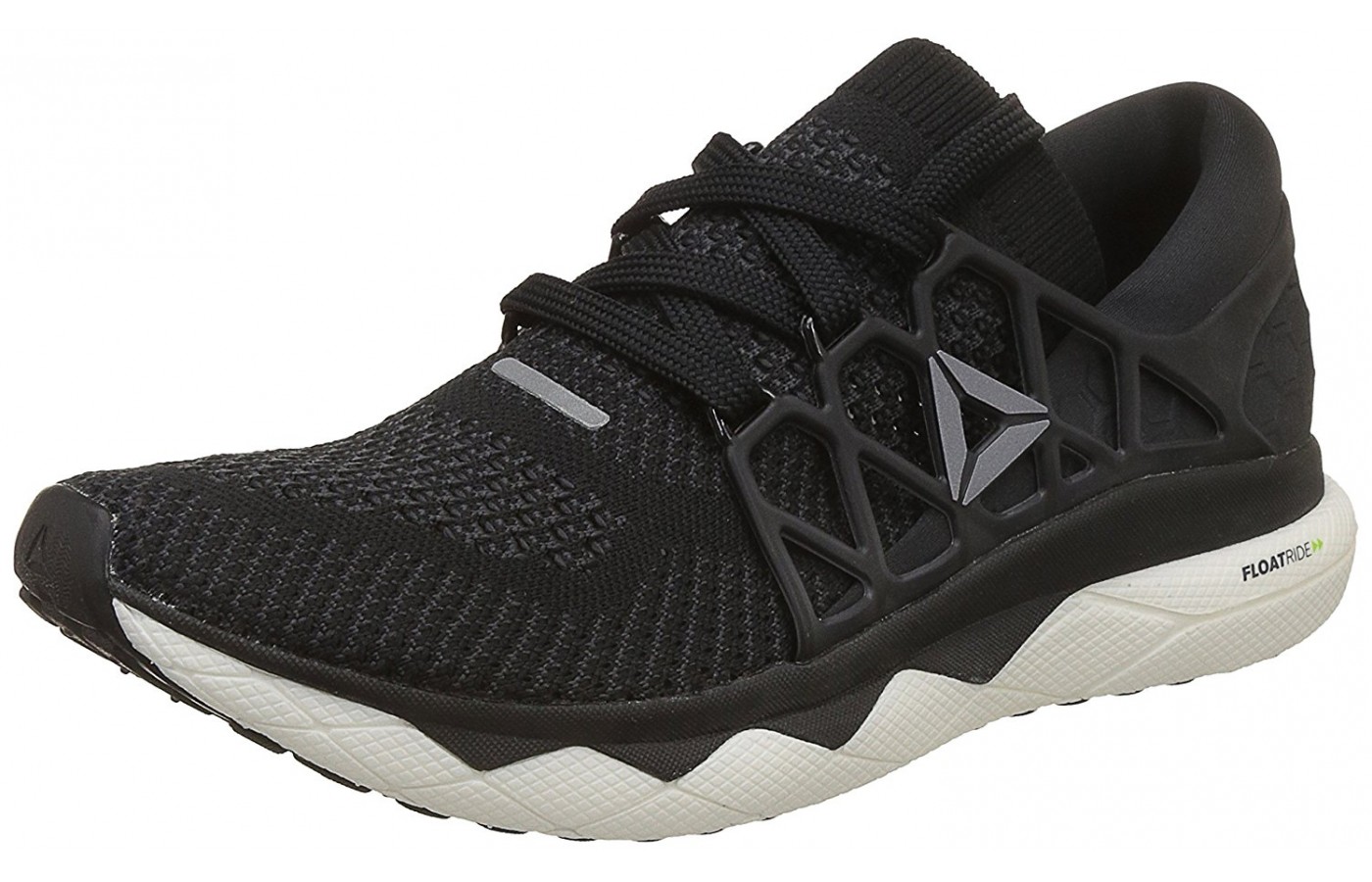 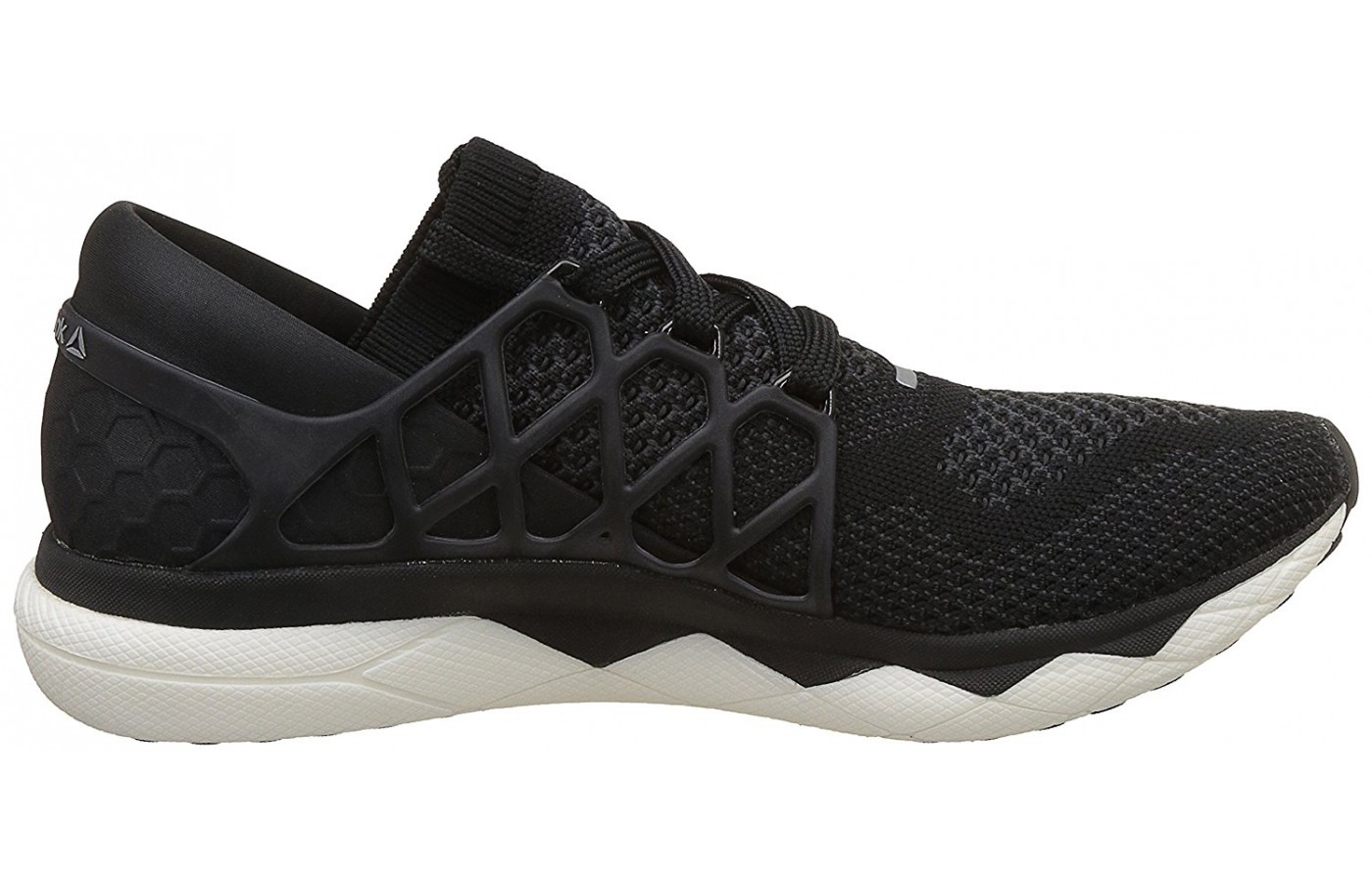 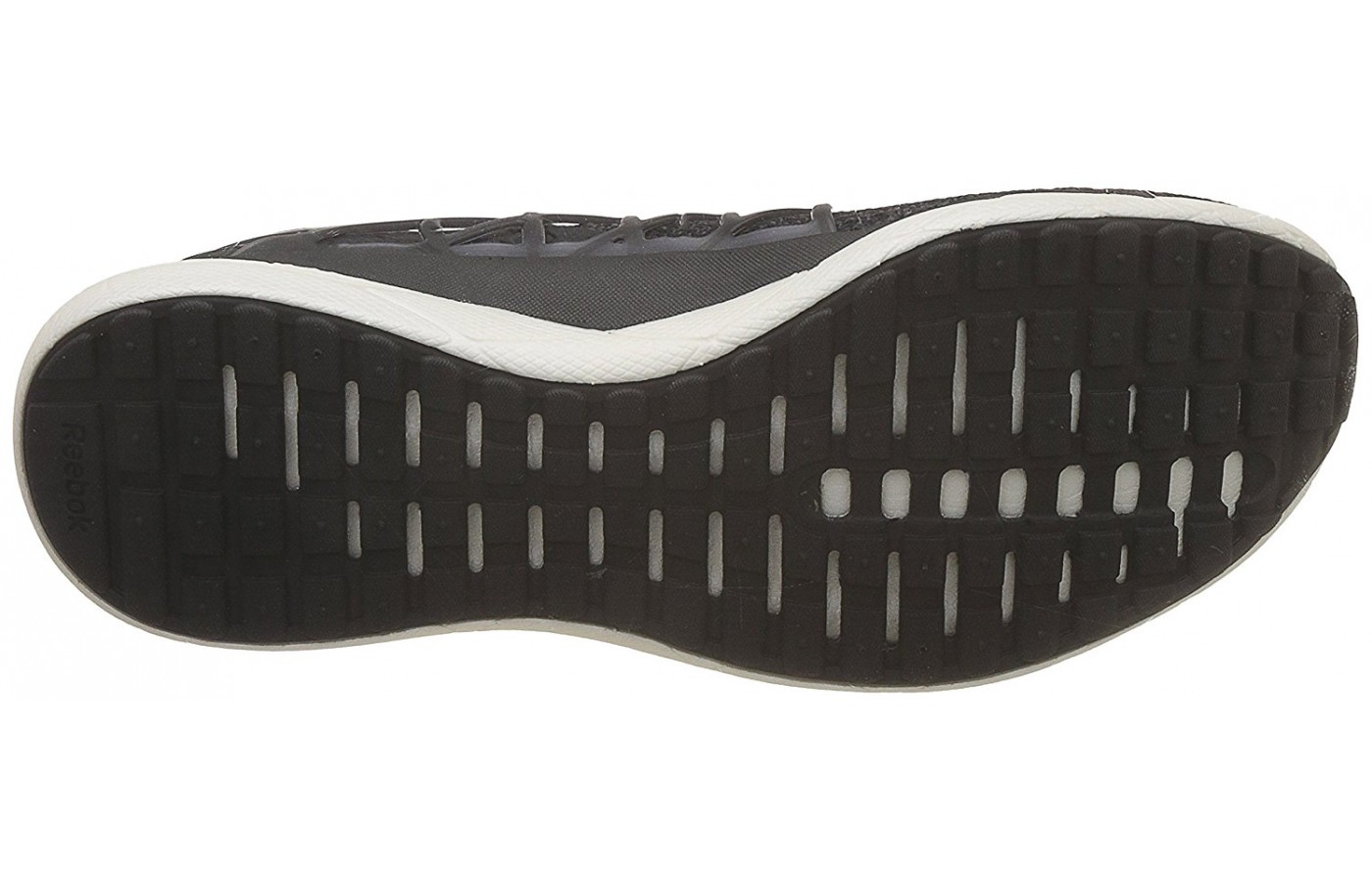 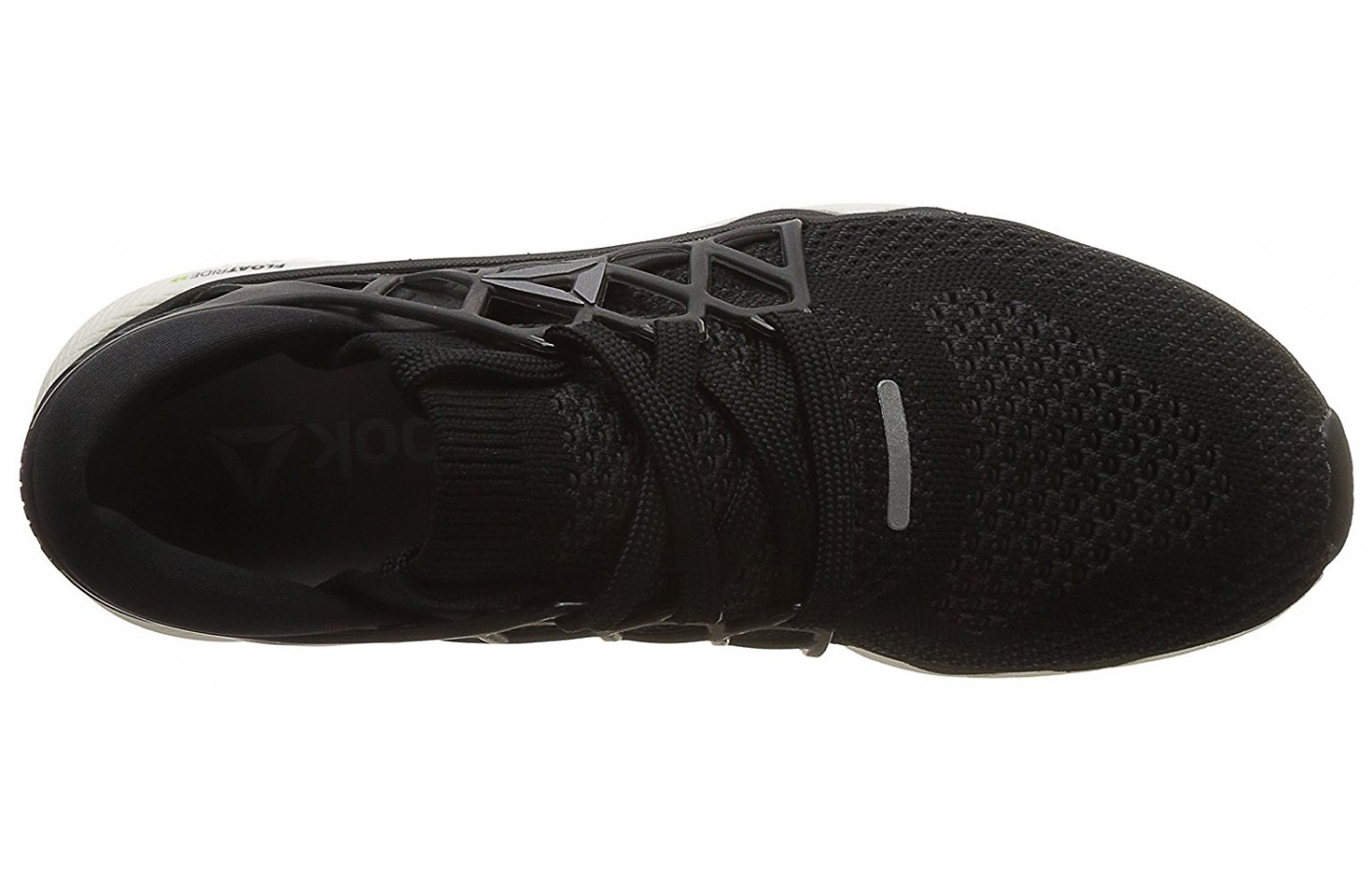 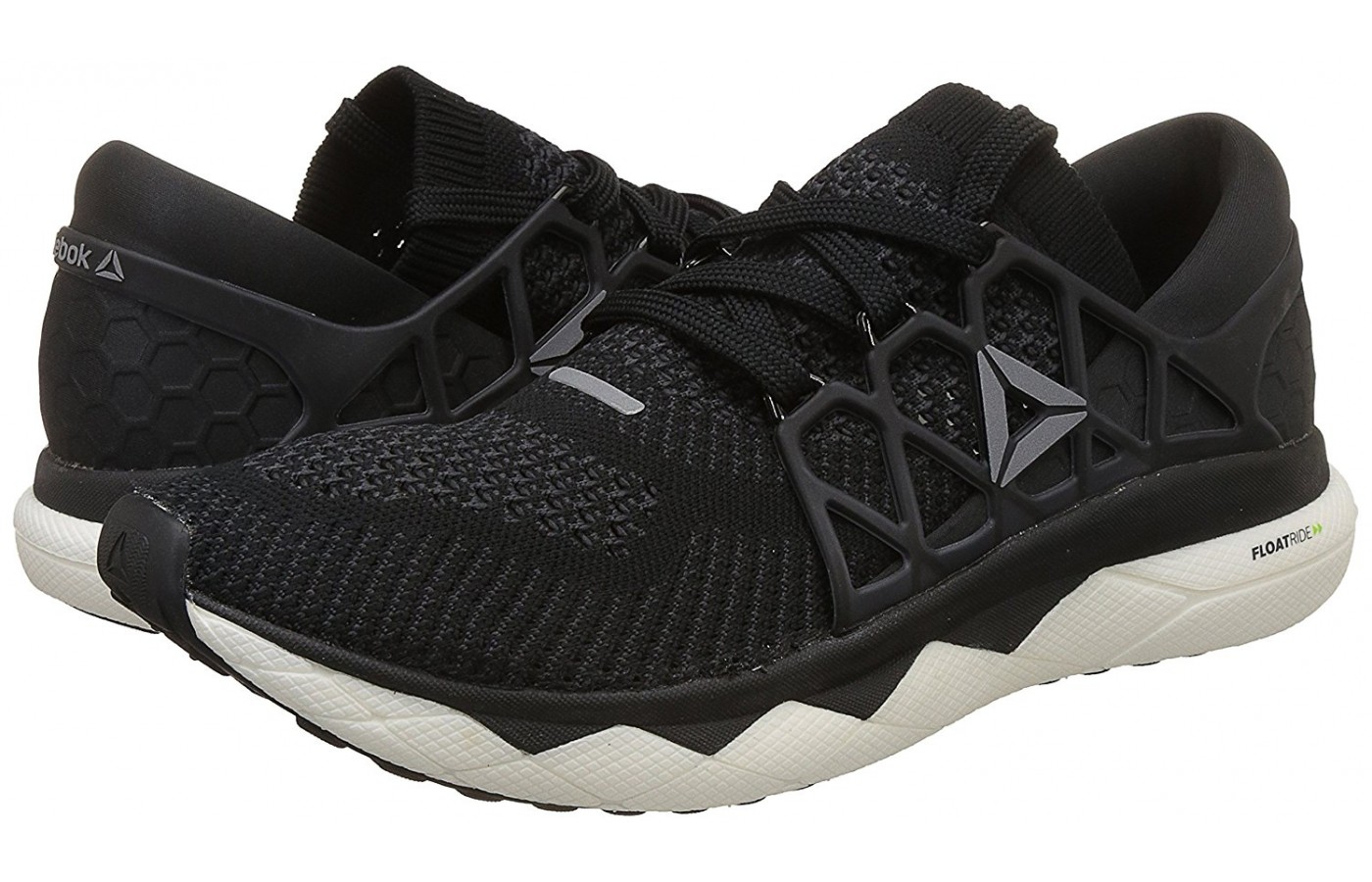 The Reebok Floatride 6000 features a minimalist design that optimizes both the runner's range of motion and comfort while the shoe is in use. The shoe features a mesh upper with a cage, whose purpose is to improve the stability of the shoe overall. The design of the upper is what Reebok has decided to make a bit unconventional. The sole unit of the shoe follows the upper’s lead and has relatively few features that will bog the shoe down. The release of this shoe has allowed Reebok to re-enter the running shoe market rather comfortably.

The outsole of the Reebok Floatride 6000 is designed from a rubber material, which is customary for shoes of its design. The sole unit has been given a tread design which allows the shoe to get a moderate level of grip on various surfaces. The sole of this shoe is actually very simple when compared to that of various other running shoes. The simple design of the outsole adds a comfortable nature to the design of the shoe while also allowing the shoe to be run on the more developed terrains such as roads. The minimal cut of the rubber on the outsole of the shoe also allowed Reebok to take a nice amount of the possible weight from the shoe.

The upper of the shoe, much like the sole unit of the shoe has a plethora of materials used throughout. The shoe features materials such as a plastic cage and mesh heel covering. The shoe also features an Ultra-knit upper which aids the shoe in being comfortable to the wearer. The shoe cage that covers the sides of the shoe is also where the laces are connected; this gives the shoe a tight covering, allowing it to be used for rapid movements.

The Reebok Floatride 6000 is designed from several materials which allow it to maintain it’s lightweight overall design. The shoe has an upper crafted from thin cuts of both lightweight mesh and mesh materials. The use of these materials in the design gives the shoe the comfortable lightweight feel that it is known for. On top of this, the sole unit of the shoe is crafted from a relatively thin cut of materials as well; the hybrid midsole on the shoe is relatively thin a well as the almost non-existent outsole that is featured on the shoe. With all these parts of the shoe being put together, the Reebok Floatride 6000 weighs in at a meager 8.5 oz for a size 9.

The materials used in the design of the upper for the Reebok Floatride 6000 allow for a high level of air-circulation to be achieved by the shoe. The shoe features an upper that is designed from a blend of Utraknit, mesh, and plastic overlays; the use of thin cuts of these materials allows the shoe to remain relatively lightweight while on foot, which also plays an important role in the shoe’s need to be extremely breathable. The majority of the upper is designed from the mesh material, which is known for being rather porous; the porous design of the mesh materials one of the big reasons why the shoe provides the level of airflow that it is known for. Aside from this, the lack of extensive coverings on the upper allow maximum breathability and reduces restriction of the wearer’s foot.

The Reebok Floatride 6000 features a design that incorporates several materials which promote the shoe’s overall comfort and breathability. The shoe features a heel cup designed from a mesh material; this material incorporated with it’s desired purpose, allows the shoe to have both a snug and comfort-fitting feel while in use mainly because of its elastic properties. The mesh portion of the upper does its part by also providing the wearer with a comfortable snug-feeling feel while in use. The sole unit of the shoe has several properties which provide the wearer with maximum comfort while in use mainly the midsole portion. The midsole of the shoe is designed from a combination of both EVA and Floatride foam; the use of these two materials gives the shoe a plush feel while on foot.

Although the shoe is very minimal in the design, the way that the materials are blended together allows for a decent bit of longevity to be achieved by the shoe. As mentioned in the above sections, the shoe features a majority mesh upper design. The mesh is relatively well-woven throughout the forefoot which protects it from extensive wear. The one thing that can be said is that the shoe doesn’t hold up very well in the “tongue” area; it begins to fray relatively quickly because of this. Reebok’s use of the layer of hardened rubber acting as the outsole of the shoe protects the foam material of the midsole; the rubber itself is rather durable, the foam has a habit of breaking away.

Reebok used very little in the design of the shoe to act as protection for the wearer’s foot. This means that, while the shoe is attractive, it has very few if any guards placed throughout. The shoe has the heel guard placed in the back of the foot which aids in the shoes ability to comfort and prevent abrasion while being worn. Despite this quality of the shoe, the rest of the shoe is basically naked. The mesh of the forefoot has nothing but the cage acting as a covering which does nothing for the shoe considering how minimal the plastic cage is; the cage is relatively firm though, so it can prevent some damage from coming to the wearer’s foot while in use.

The midsole of the shoe is designed to give the wearer an extremely energy-returning and comfortable ride while worn. The Reebok Floatride 6000 features a midsole made from a combination of both Floatride and EVA foam. The Floatride foam in the midsole is known for being rather plush and providing the wearer with a decent amount of cushioning for their feet; the plush quality gives the wearer the ability to move rather easily when coupled with both the shoe’s lightweight design and traction-enhancing outsole. The EVA does it’s best to balance out the plushness of the Floatride with its firm nature. This stabilizing effect allows the shoe to achieve the responsive and downright comfortable feel that it is known for.

Although the Reebok Floatride 6000 has very little in the way of firm design features, it does it’s best to provide support in both the upper and the sole unit of the shoe. The upper on the shoe is designed from a mix of both Ultraknit and mesh materials. The heel cap on the shoe and the elongated tongue provide a decent level of support for the upper regions of the wearer’s foot such as the ankles, while the cage on the forefoot gives both a sense of security to the curves of the wearer’s foot. The foam on the sole unit of the shoe gives it a decent level of cushioning and conforms to the natural grooves of the bottom of the foot.

The Reebok Floatride 6000 is made for more developed terrains; it’s as simple as that. The shoe features a sole unit made of foam and a thin layer of hardened rubber that acts as the “protector" of the foam in the midsole. The use of the thin layer of rubber gives the shoe the traction and flexibility to run on terrains such as indoors and on roads. Due to the thin cut, the shoe would simply be destroyed if worn in areas such as trails and the like.

The Reebok Floatride 6000 is honestly not as expensive as it probably should be. Considering the vast amount of both comfort and flexibility incorporated into the shoe, it has an extremely high value; the shoe has the blend of materials in the upper that allows for both breathability and flex. The use of the combination of materials in the sole unit of the Reebok Floatride 6000 makes it versatile in its potential uses. The aesthetics of the shoe somewhat takes away from the value of the shoe but not by much.

On the more developed surfaces such as roads, the layer of rubber that makes up the sole unit of the shoe allows for a decent amount of traction to be attained by the sole of the shoe. The shoe features a grid patterning that somewhat exposes the midsole’s foam; this patterning allows for both flexibility and enhances the shoe’s ability to grip the surfaces that it is used to run on. On top of this, the grid patterning is somewhat raised, which further enhances the traction capabilities of the material.

The thin cut of the materials that make up the upper of the Reebok Floatride 6000 takes away from their ability to provide a stable secure ride to the wearer. Reebok counteracted the usual problem that comes along without the use of thin materials such as mesh and Ultraknit in the upper of the shoe by adding a strap to the heel of the shoe and the cage to the forefoot. The cage on the forefoot of the shoe gives it the sense of sense of security that most designs simply don’t have; it does all of this while also retaining the shoe’s natural breathable design.

The drop on the Reebok Floatride 6000 is relatively tiny. The shoe has a heel-to-toe drop of about 8mm which, when coupled with the responsive nature of the foam material in the sole unit enhances the shoe’s ride dramatically. Reebok has done a nice job in designing a shoe which provides a decent ride to the wearer. If it weren’t for the rigidity of the cage on the shoe, it would be immensely better.

Overall, the design of the Reebok Floatride 6000 is one that promotes comfortability. The shoe features several materials which enable it to provide an overall natural feeling movement while in use; this is due to the mesh on the upper coupled with the low-drop sole unit. These things coupled with the price of the shoe do more than justify purchasing it. The one thing that wearers should consider before purchase though, is the cage on the shoe, it is somewhat rigid. 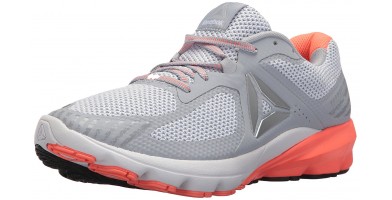 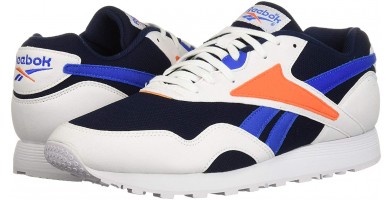 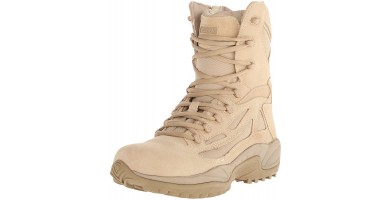