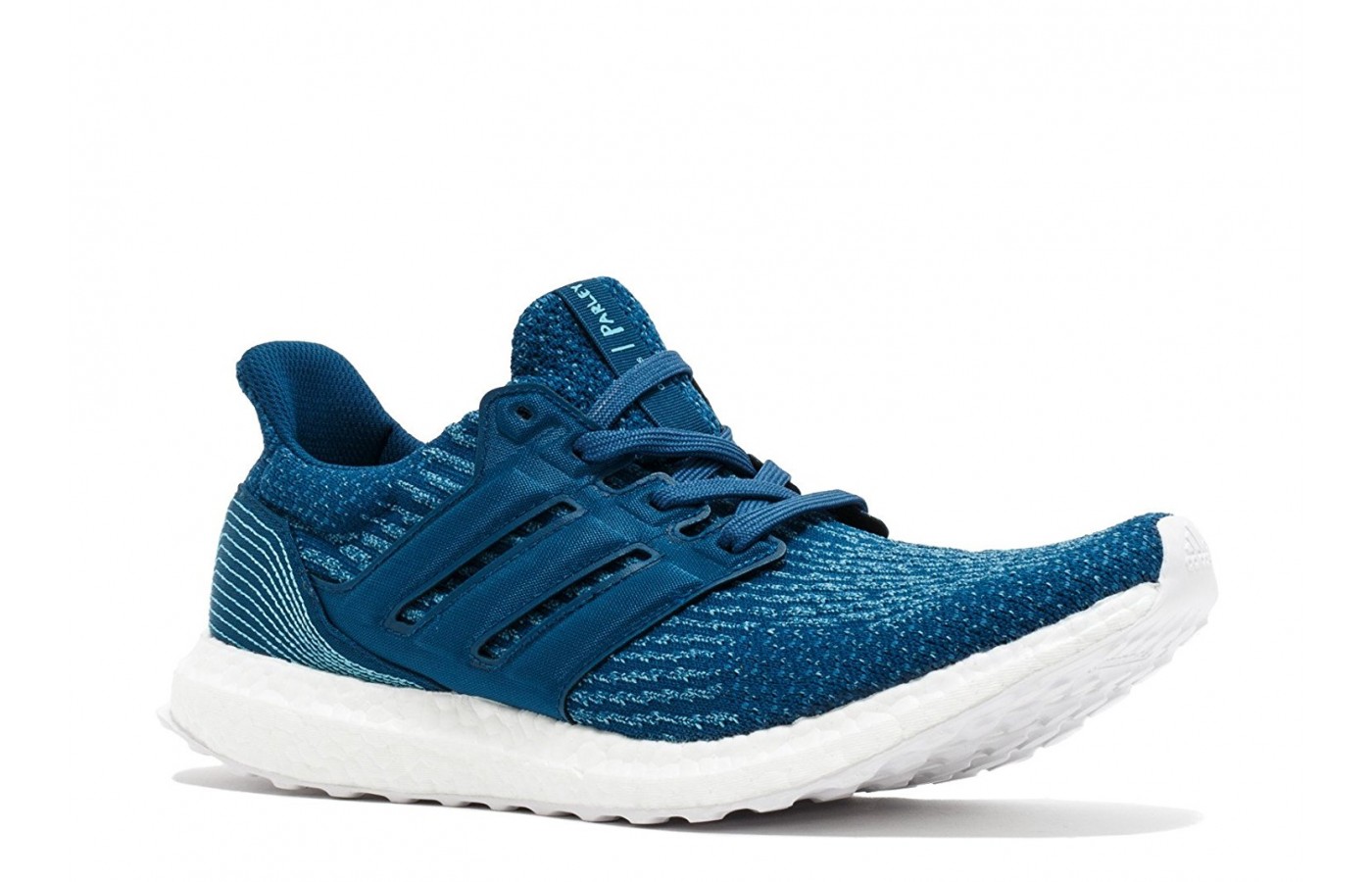 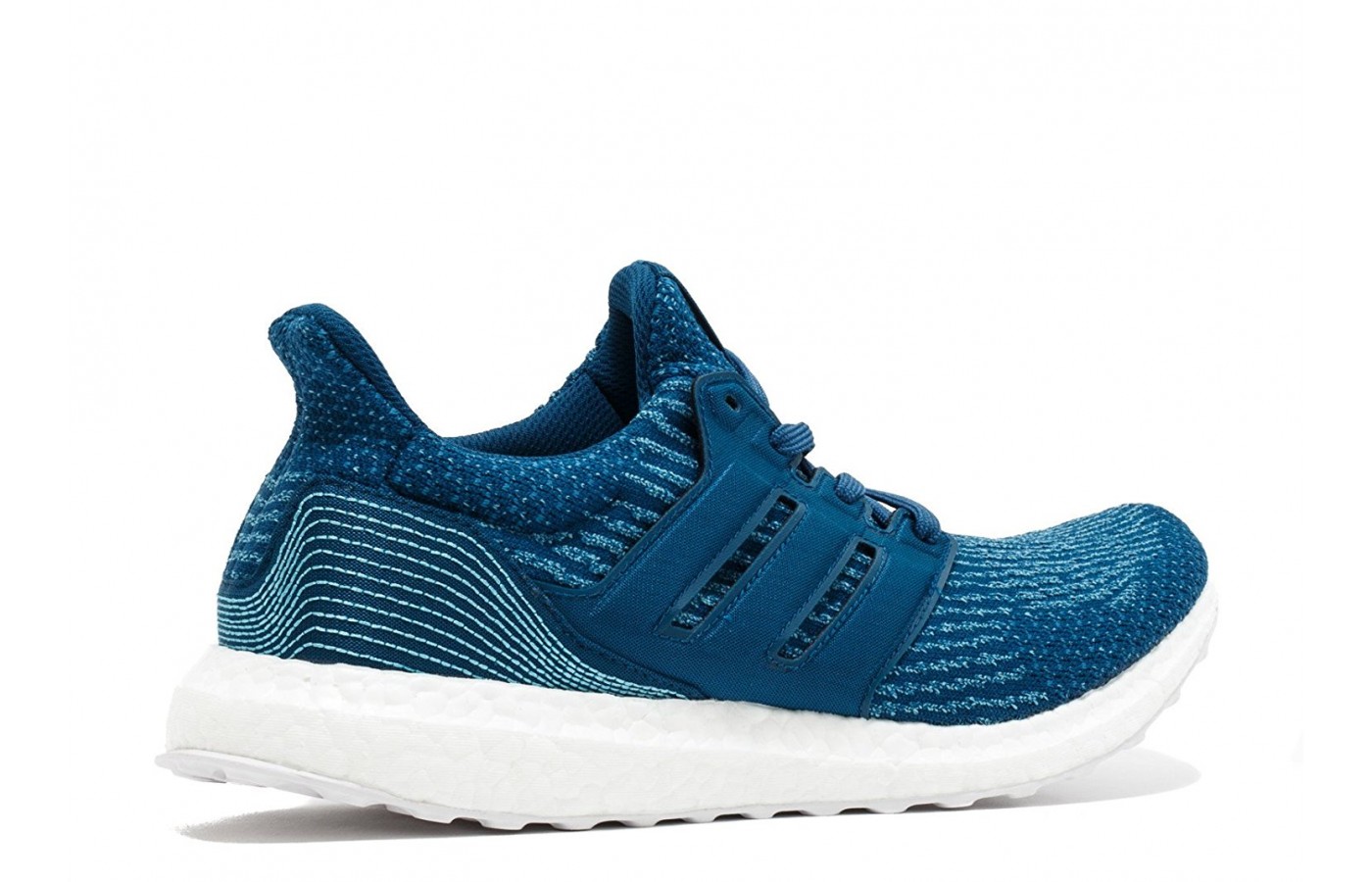 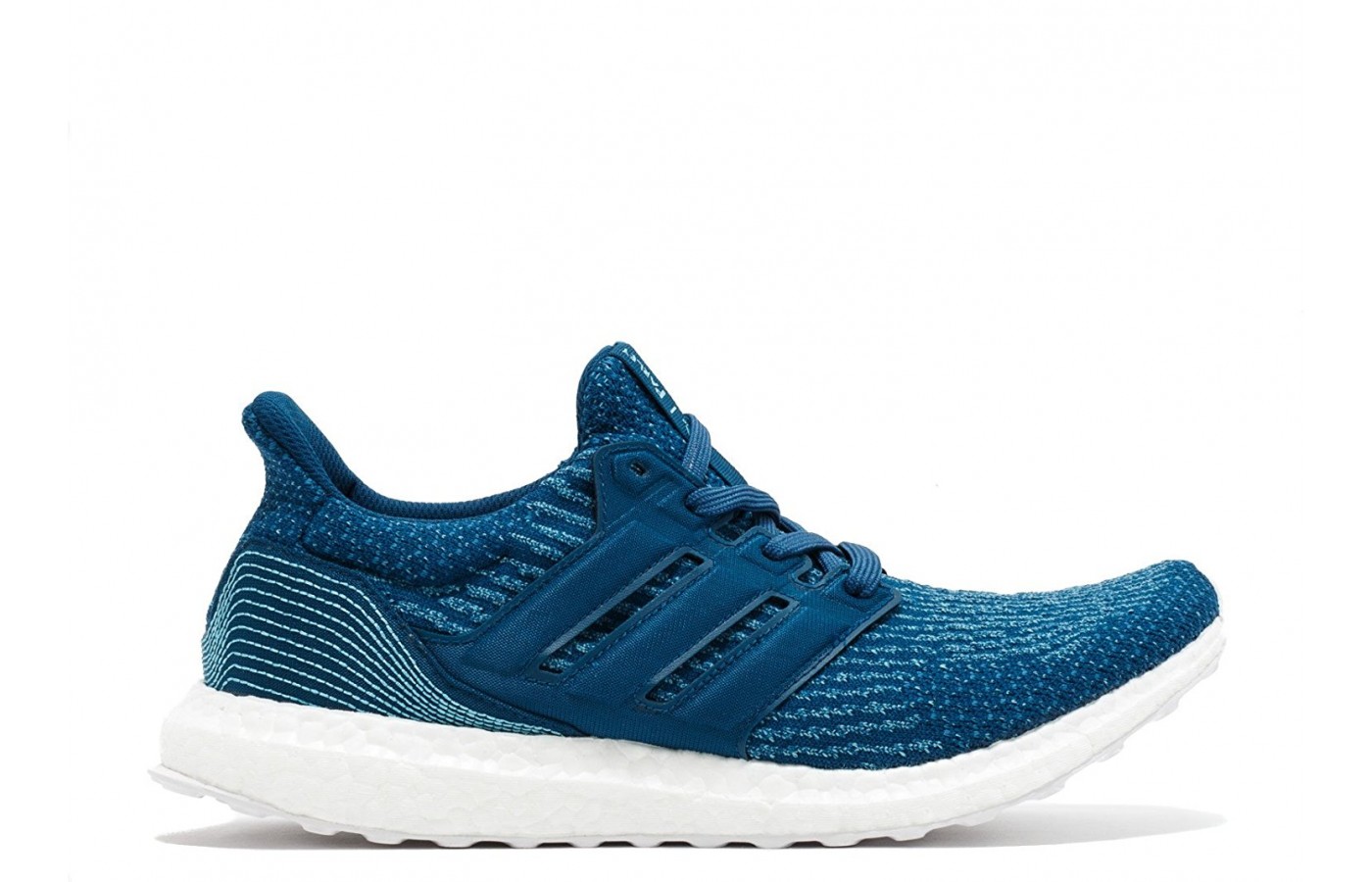 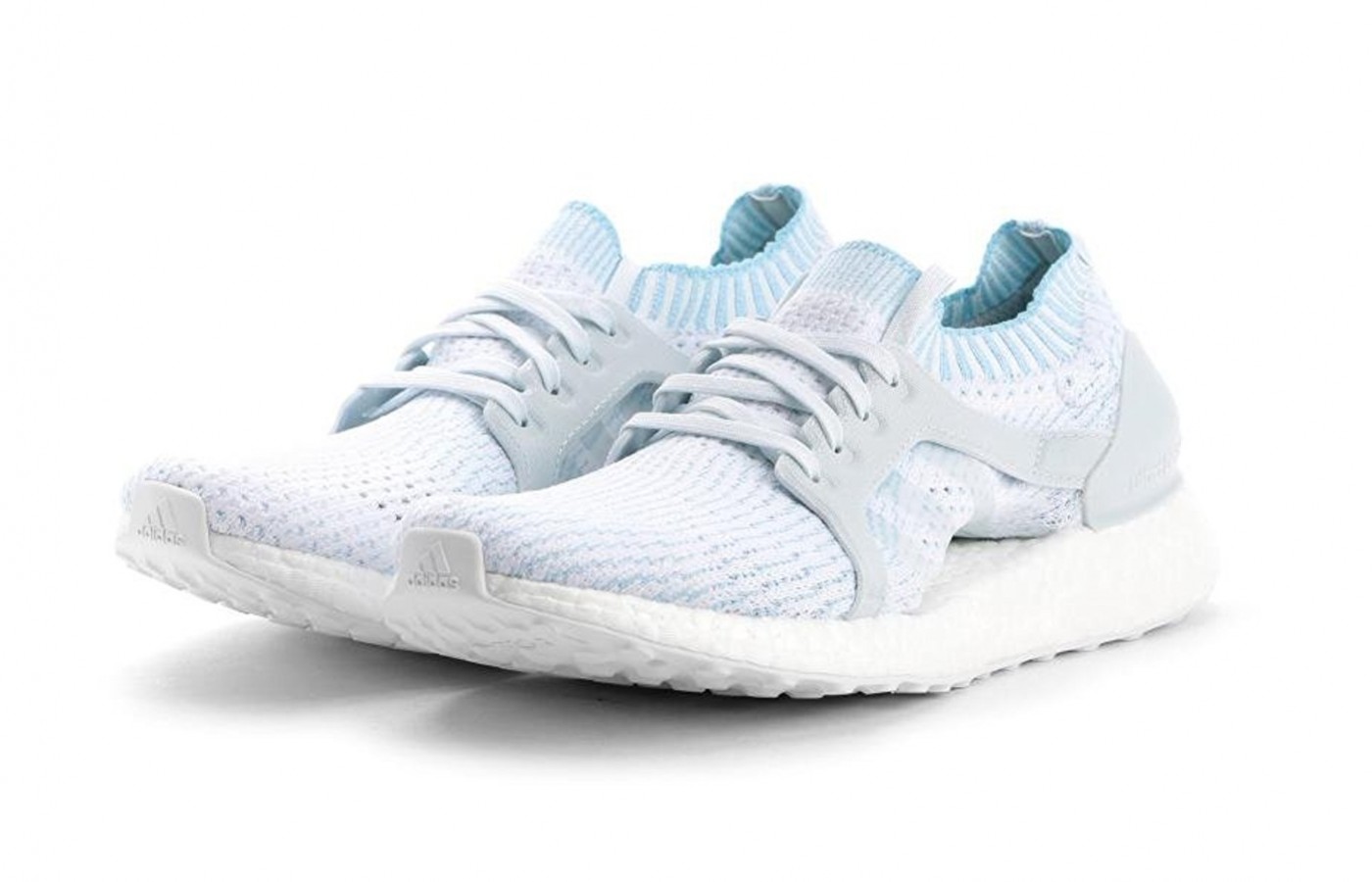 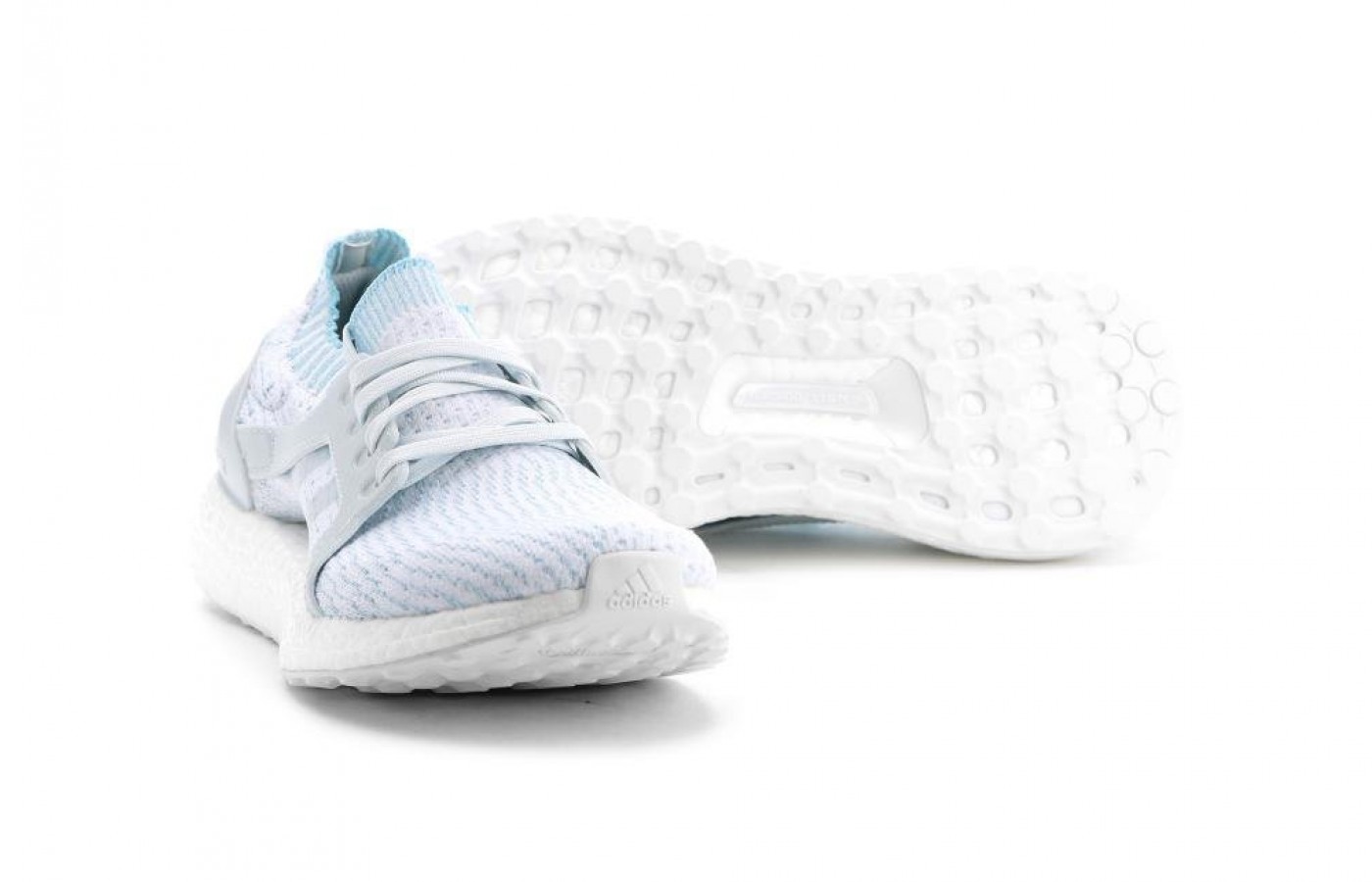 The beloved Adidas Ultraboost has come back in a new redesign that see it paired with Parley for a more eco-friendly shoe option. The shoe, bieng designed by both Adidas and Parley is the result of their A.I.R.  initiative strategy, which is to basically, turn plastic into shoes. The redesigned UltraBoost is known for being extremely lightweight and for delivering to the wearer an amazing overall experience. Of the technologies included in the shoe, there are things such as the stretch web outsole, the recycled material prime knit upper, and Adidas Boost material in the midsole of the shoe. Another thing to mention about this shoe is that the sole unit features Adidas Torsion system which allows the shoe to provide a stable overall ride for the wearer.

The outsole of the Adidas Parley features Adidas Continental rubber material. The Continental rubber make of the sole unit allows the shoe to achieve a high level of durability as well as functionality. The fact that the material was fashioned into their stretch web patterning also allows the shoe to get a decent grip on the ground and aids the shoe in the flexibility category as well. The sole unit also allows for more range of motion in the heel portion of the shoe due to Adidas addition of their Fit counter on the heel of the shoe.

The upper of the Adidas Parley, as was mentioned earlier, is designed from Adidas prime knit. The one thing about the upper of the shoe is that the partner up with Parley means that it made from recycled material; making this shoe somewhat of a tribute to recycling. Everything from the sock-liner to the shoelaces is designed from plastic bottles. The use of recycled materials makes the prime knit upper of the shoe somewhat stiff, but it still doesn’t take away from the comfortable effect that the material usually provides. The shoe also features coverings on both the sides and the heel of the shoe which allows the shoe to provide protection for the wearer’s foot.

The materials used in the creation of the Adidas parley are all known for being incredibly lightweight. Although there are a few coverings laced throughout the upper of the shoe, there aren’t very many; this results in a somewhat lightweight upper. Also, the use of the recycled material doesn't do much to add to the weight of the overall shoe either. The material used in the making of the sole unit is what adds the weight to this shoe. The sole unit features technologies such as the torsion unit and the boost material. On top of this, it contains Adidas continental rubber which, isn’t the lightest material. All in all, the shoe weighs in at 10.7oz for a size 8.5, which is honestly pretty heavy. That doesn’t take away from the ride experienced by the shoe, but it is relatively heavy.

The Adidas Parley has the style of the common lifestyle shoe. The shoe features a slim cut mesh upper coupled with a somewhat wide sole unit. The shoe comes in a variety of colors which allows the shoe to be somewhat versatile. Adidas decided to give this shoe as somewhat minimalistic look, which explains why the shoe lack much in the way of coverings and the like. The sole unit, while being wide, is also extremely simple; it has one color and lacks any special colors or designs. To some, the initiative that Adidas has taken to make their shoes more eco-friendly may add to the overall style of the shoe as well.

The material that makes up both the upper and the sole unit of the Adidas Parley are known for being extremely durable. The sole unit of the shoe is made from a blend of both Adidas’s Boost material and their Continental rubber. The continental rubber is a blend that allows the sole unit of the shoe to hold up for extended periods and gives the show a higher level of grip. On the other hand, while the boost material is primarily known for the bounce that it gives to the wearer of the shoe it is also extremely responsive and gives the wearer several hundred miles before it begins to run out of steam. The upper of the shoe is made from recycled plastics and Adidas Prime knit; the prime knit is known for being well made and allow the shoe to benefit the runner greatly.

In terms of responsiveness, the boost material that makes up the sole of the shoe really does it’s best to provide. The Adidas Parley features a full-length boost midsole, a material that is known for its shock absorption and comfort providing qualities. While the shoe is being worn, the boost does it’s best to take in the impact of hitting a hard surface and redirecting it back out to result in a natural overall ride. The boost is also known for I’s ability to react to the shape of the wearer's foot, which implies that it won’t show any lag in movement. The sole of the shoe and the grip that it provides is also extremely responsive and gives the wearer an extremely responsive feel while the shoe is being worn. On top of this, the upper of the shoe is form fitting and moves in sequence with the movements of the wearer’s feet, resulting in quicker overall movements.

The shoe is extremely versatile in its terrain handling capabilities but works best on roads and the harder surfaces. The sole unit of the shoe features a stretch web continental rubber material lining the outsole of the shoe. The continental rubber, while it is relatively durable, doesn’t have the best handling capabilities on the rural landscapes and things of the like. On the more developed terrains, the stretch web material is able to able to get a better grip on the surface and faces less risk of expedited wear. The upper of the shoe is relatively durable, which means that the wearer would face very little risk of wear on that part of the shoe regardless of the area that the shoe is used to run in.

One thing that must be mentioned about the Adidas Parley is that it is definitely not cheap. The shoe comes with several technologies that justify its price such is the continental rubber outsole and the Boost material that makes up the midsole of the shoe. Another thing that must be mentioned is that the shoe’s upper is designed from recycled materials which might have been something that impacted the price of the shoe dramatically. Overall, the comfort and functionality provided by the shoe do an amazing job of justifying the shoe’s price.

In terms of flexibility, the upper and the sole unit of the Adidas Parley allows it to flex with the movements of the wearer’s foot with relative ease. The upper, being made from Adidas prime knit material allows the shoe to both conform to the shape of the wearer’s foot and to bend while the shoe is in use. This allows the shoe to provide the wearer with a high range of motion. One thing that must be mentioned about the Parley’s prime knit upper is that, since it’s designed from recycled plastics, it is a bit stiffer than the regular prime knit material. This somewhat takes away from the shoe’s flexing ability, not much, but it should be mentioned. The sole unit of the shoe is made from boost material and Continental rubber, two materials that allow for a high overall flex to be achieved while the shoe is in use. Boost is known for its plush qualities, qualities that also indicates that the shoe is great at being able to bend with the movements of the wearer’s foot. The outsole of the shoe is also cut relatively thin, which allows for it be able to retain it’s flexible nature quite well.

The Adidas Parley features a few stability features, not many, but a few that should be mentioned. The upper of the shoe has a few coverings which enables the shoe to provide the wearer with a sense of security above that provided by other shoes. The use of coverings on the side of the shoe keeps the user’s foot in place while engaging in strenuous and high-speed activities. The wide base that is the sole unit of the shoe also acts in this capacity, it gives the wearer a stable base to land on while the shoe is being run in.

In terms of drop, the Adidas Parley has a relatively high one. The heel-to-toe ratio on the Adidas Parley is about 10mm, which actually about midrange. This does take away from the natural feeling achieved by the shoe but doesn’t really affect the shoes functionality at all. The use of Boost in the midsole of the shoe does it’s best to counteract the effect of the high drop in the shoe, which it does to a certain extent.

All in all, the design and materials used for the Adidas UltraBoost X Parley are of the more durable variety. Despite the high price tag that is accompanied by the shoe, it still delivers in many ways. The fact that Adidas has gone out of their way to make a recyclable and eco-friendly shoe means a lot to the company and justifies the price on these stylish shoes. The shoe is highly responsive and does a great job of being durable, by holding up after several uses. On top of this, the shoe’s overall design is extremely stylish, allowing the shoe to worn outside of the running environment. 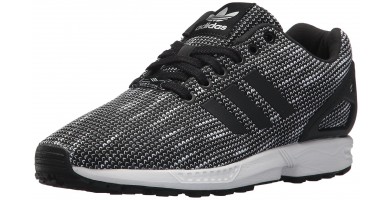 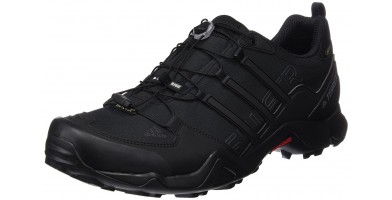 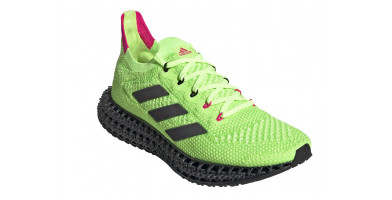