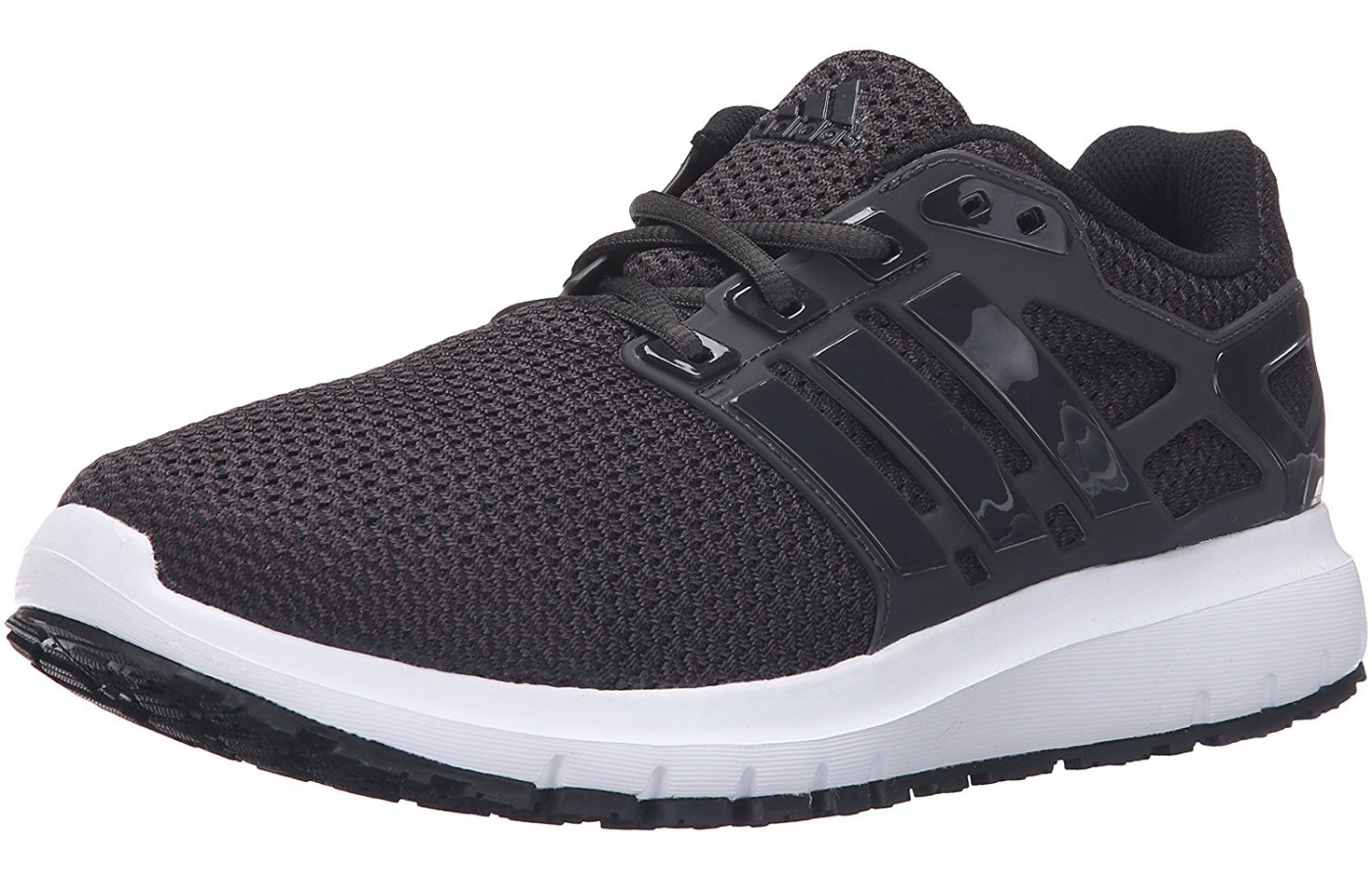 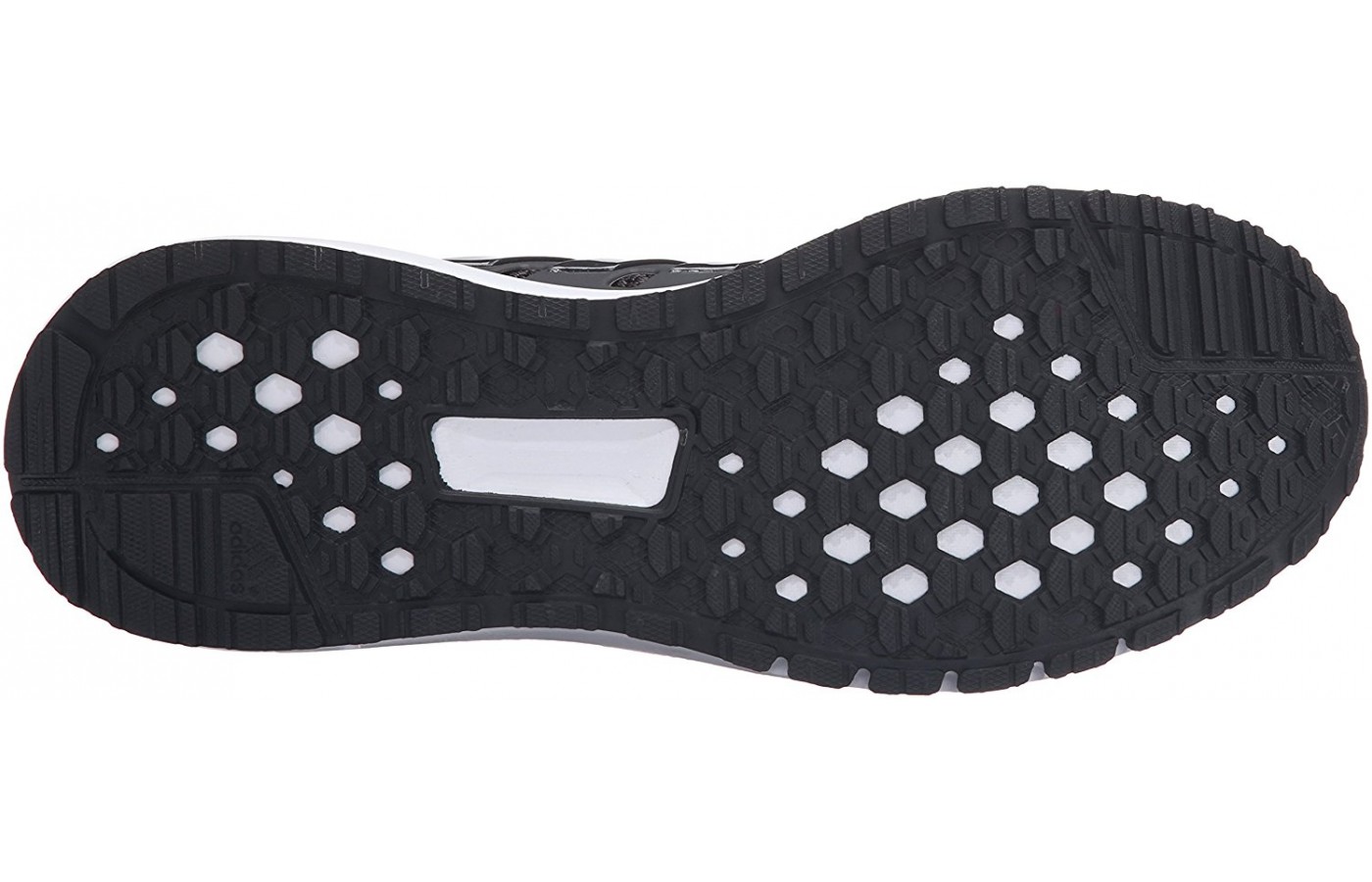 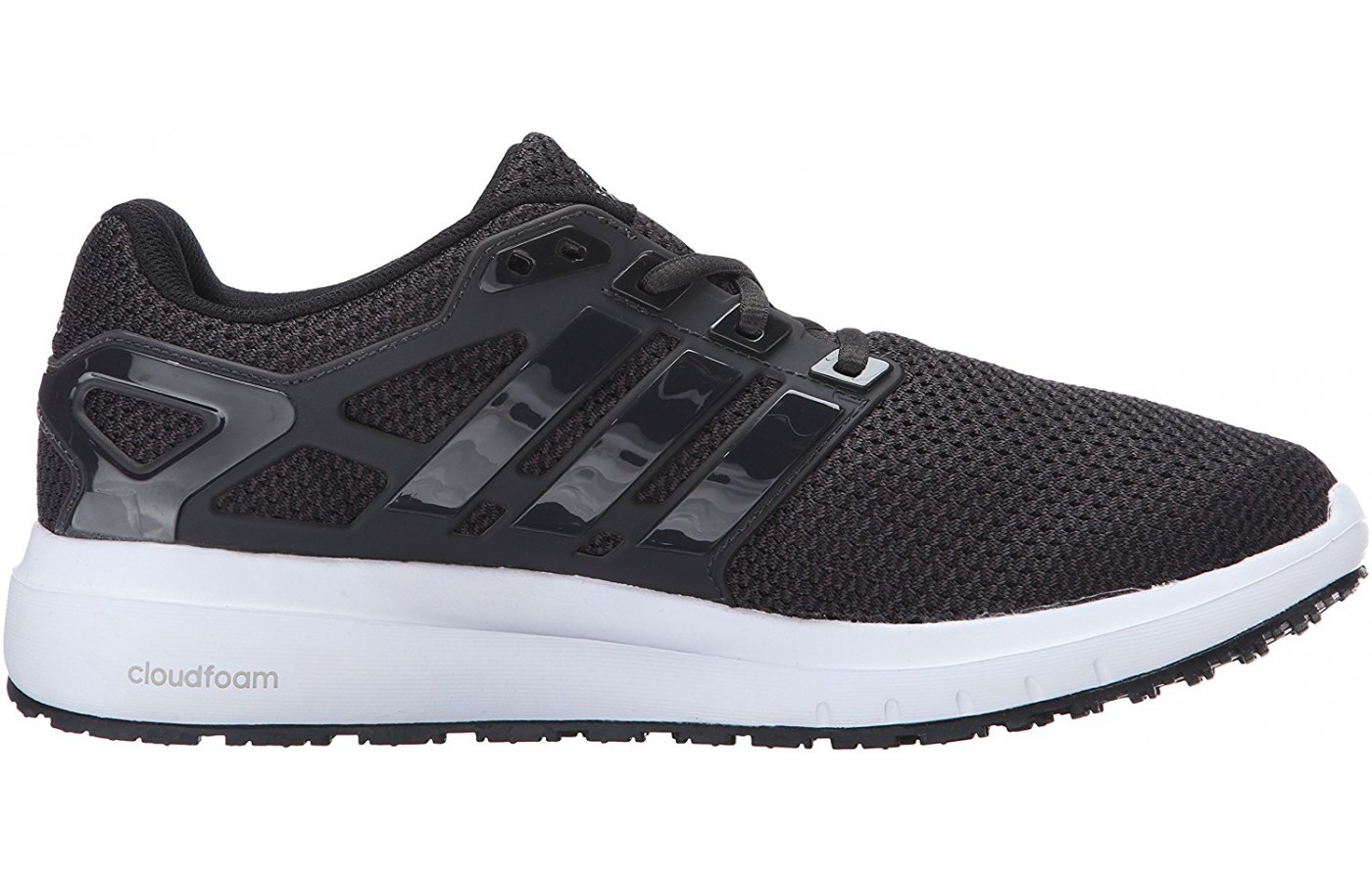 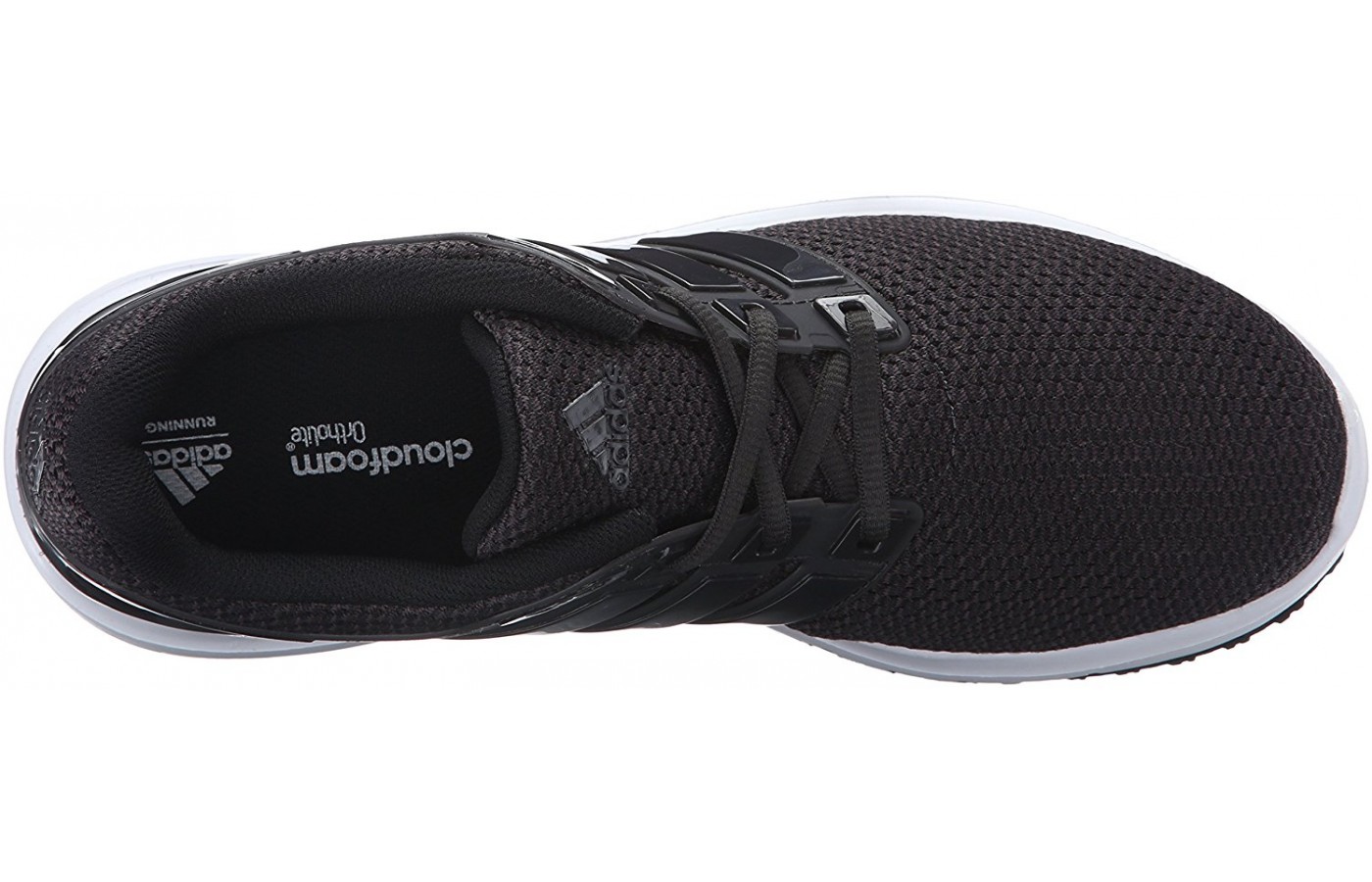 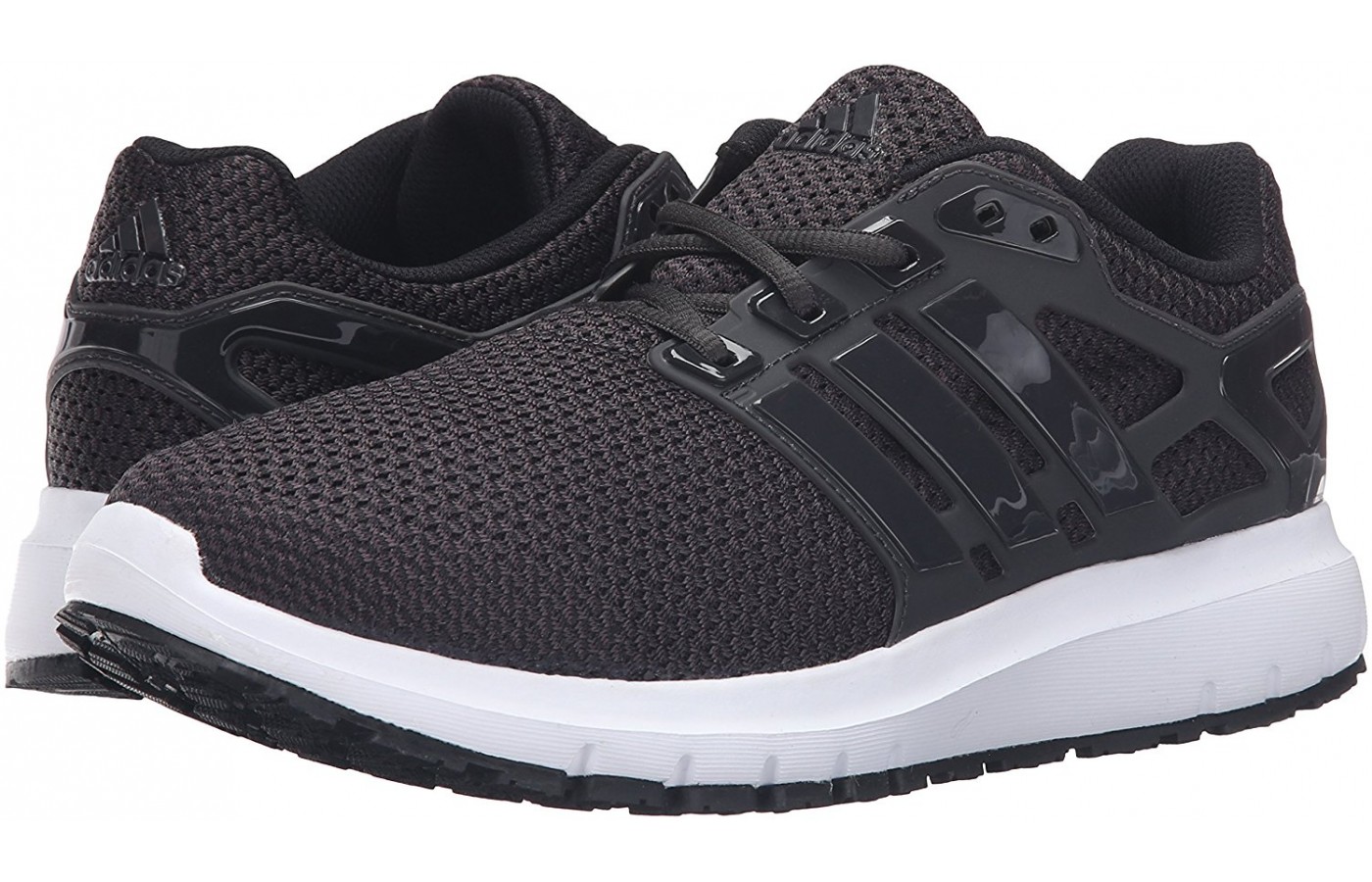 8.3
8.3 score
(WalkJogRun) score (8.3)/10
Our WalkJogRun score is based on 3 different factors: Editor's rating after in-depth testing. User ratings submitted on this page Overall score from the "reviewmeter" based on reviews across the web the weight of each factor is: 40% editor rating 15% user ratings 45% reviewmeter.
0
Editor rating: 9.0 / 10

When runners are looking for a durable and comfortable shoe to use for their jogs, most fail to look further than the Energy Cloud by Adidas. Equipped with various technologies that allow the shoe to stay form fitting and comfortable during use, the Adidas Energy provides the wearer of the shoe with most of the things that runners need to stay on top of things during use. The midsole of the shoe provides a very high amount of cushion while the outsole does just the opposite and provide the wearer of the shoe with a very high amount of traction.

We have spent 4.5 hours analyzing a total of 817 reviews.

Positive
Read more
Negative
Read more
Reviewmeter
The Reviewmeter shows you an overall score that you can easily refer to. The highest rating is 10 (100% positive feedback)
Of the 817 reviews we found in total, 22% were negative, and 78% were positive.
7.8
1
5
10

The outsole of this shoe is designed in such a way as to promote both traction and durability. The shoe features an outsole designed of Adidas Adiwear technology; the rubber on the outsole can withstand a high level of use while showing minimal signs of wear and tear. The patterning on the outsole of the shoe also works in this regard; it is tread-like thus preventing the entirety of the outsole from encountering the ground all at once. The treadlike-pattern of the outsole also enables the shoe to achieve a high level of flexibility while in use. Another plus.

The midsole on the Energy Cloud is crafted from Adidas Cloud Form technology. This material, as the name of it suggests is almost cloud-like. The material conforms to the shape of the wearer’s foot and provides them with an overall natural feel during their ride. The shoe features a decent amount of the foam placed in the heel portion, which allows the shoe to provide the wearer with a high level of support in that area. Overall, the midsole of the shoe is extremely responsive and provides the wearer with more than enough in terms of support and comfort.

The upper of the shoe is highly ventilated and is about as comfortable as the midsole on the shoe. The Energy Cloud has been given an upper that is primarily designed from mesh with a few overlays sprinkled here and there for stability The shoe features plastic heel counters on the heel of the shoe which enhance the support provided by the shoe and give the shoe something in terms of form; the mesh by itself wouldn’t have allowed this shoe to be worn for the extended periods that runners need from the shoe.

Despite the high level of cushioning that the shoe was given, the Energy Cloud still manages to weigh surprisingly very little. The Energy Cloud weighs in at 9 oz. for a size 9.5 in men’s shoes. This is relatively surprising because of the high level of cushioning that is present in both the upper and the sole unit of the shoe. The mesh make of the upper of the shoe somewhat aids in explaining the lightweight design, as well as the fact that there is very little in the way of overlays on the upper as well.

Now, the name of the Energy Cloud suggests that it feels cloud-like when worn on foot. This holds true for most people due to the high level of cushioning that Adidas has decided to place throughout the design of the upper of the shoe. The Energy Cloud has a midsole designed of Adidas Cloud form foam, which allows the shoe to function on a very high level regarding conforming to the shape and size of the wearer’s foot. The mesh make of the upper of the shoe also acts in the same way that the cloud form foam does; it provides the wearer with a high level of comfort and doesn’t restrict the wearer’s foot in any way. On top of the things already mentioned, the materials that make up the design of the shoe allow for a high level of flexibility to be achieved while worn.

The Energy Cloud is a relatively stylish shoe. It doesn’t have any of the perks that most of Adidas Lifestyle model shoes have, but for a running shoe it is somewhat minimalistic. The minimal design of the shoe allows it to be worn with a variety of other clothing types and, due to the mesh make feels very comfortable while doing so. The basic color blocking that Adidas did with this line of their shoes also allows it to blend in well with various other types of clothing which is a plus. All in all, the shoe is extremely versatile and can be worn while running or simply if the wearer wants a shoe that will provide their feet with a bit of comfort.

The material that makes up the various parts of the Energy Cloud are all relatively durable, giving the shoe a high level of longevity. The outsole of the shoe features Adidas Adiwear technology; this hardened rubber prevents the sole unit from breaking down/degrading after continuous wear of the shoe, which is a plus. The midsole and the cloud form foam that it is crafted from holds up very well with continuous use; the foam that makes up the midsole of the shoe keeps its bounce each time that it worn, meaning that it stays responsive for the duration of its lifetime. The mesh that makes up the upper also holds up relatively well; it holds up even after various uses without tearing or anything of the like. Just remember that all these things vary depending on the type of terrain that the shoe is worn on.

The upper of the Energy Cloud has relatively little to provide the wearer in terms of protection. The shoe features an upper designed from mesh material with rubber covers sprinkled here and there. The plastic coverings allow the upper of the shoe to maintain a bit of dexterity and keeps the shoe from being overly malleable but doesn’t keep the foot of the wearer protected in a general sense. The midsole, while being extremely comfortable, does keep the shoe from rolling over and damaging the ankle of the wearer while running. The midsole also provides the wearer with a decent level of support for the heel of the wearer, something that is accentuated by the heel guards placed on the upper of the shoe.

The Cloud form foam that makes up the midsole of the shoe is extremely responsive in nature. The Energy Cloud’s Cloud form midsole provides the wearer with a decent level of bounce during their wear because of the high level of energy return that it has. The outsole of the shoe provides the wearer with a high-level traction, which in turn allow for quick movements in the shoe. This is only enhanced by the lightweight design of the overall shoe, providing for higher ease of movement. The mesh’s ability to conform to the shape of the wearer’s foot without losing its dexterity acts in the same way as the sole unit, providing snappy movements.

The Energy Cloud was designed for the more developed terrains such as roads, treadmills and the like. The shoe features Adidas Adi wear technology, allowing it to be worn for extended periods without taking on a high amount of wear and tear. The cut of the outsole is relatively thin with no lugs to keep it from breaking away on the more strenuous surfaces. Basically, this means that its shouldn’t be worn as a trail shoe. The outsole does function very well on developed surfaces because of the type of outsole it ha and the pattering that it was given. One thing to keep in mind though is that the shoe doesn’t hold up very well on the damp terrains, like various other running shoes.

All that needs to be said is that the Energy Cloud is very inexpensive. It features a decent amount of technologies that provide a high level of functionality to the wearer of the shoe. When these technologies and the functionality of the shoe are weighed against the price, one can see that the shoe has an extreme amount of value, a value that is beaten by very few other shoes in this price range. Another thing to consider is the durability of the shoe, another par that adds to the value of this inexpensive shoe.

The Adiwear technology on the outsole of the shoe allows this shoe to have a high level of traction while in use. The technology and the patterning on the outsole of the Energy Cloud work to give the shoe the grip that is necessary for quick movements. The shoe is somewhat flexible as well, further improving the level of grip that is achieved by the shoe. The shoe features a tread like patterning on the outsole that allows the shoe to grip the surfaces that it is worn on without worrying the wearer about footing. The material doesn’t handle very well on the damp surfaces because of the hardened rubber and somewhat generic pattering that it has though.

The Energy Cloud has a tread-like patterning on the outsole that allows the shoe to flex rather easily. The tread-like pattering has a slight grooving that promotes the movement of the material in the sole unit. On top of this, the upper of the shoe is designed from a mesh material that aids the shoe in providing a decent level of flex. The lack of a plethora of guards on the upper also works to this effect. The midsole and its cloud form make allows the shoe to bend to the will of the wearer’s foot rather easily due to the responsive nature of the material itself.

The midsole of the Energy Cloud gives the wearer of the shoe a secure feeling while the shoe is on foot. While it is very responsive and comfortable, it still, as mentioned earlier prevents rollover of the ankle due to its somewhat firm design. The traction achieved by the outsole also works on the same level, allowing the wearer of the shoe to feel a certain level of security in their movements while the shoe is worn. Aside from this, the mesh upper provides a snug fit, which somewhat takes away from the looseness usually felt by uppers of this design.

The drop on this shoe is 10mm which is basically the average for shoes of this design. It doesn’t take away from the feel of the shoe because of the responsiveness provided by the materials that make up both the upper and sole unit of the shoe.

Overall, the Energy Cloud lives up to its name. The shoe provides a very high level of comfort as well as traction while worn. The mesh upper makes the shoe extremely breathable and the counters placed throughout aid in keeping the form of the shoe in place. 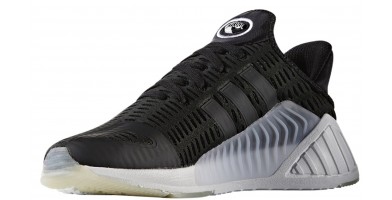 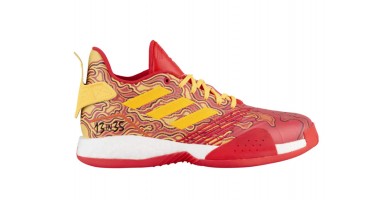