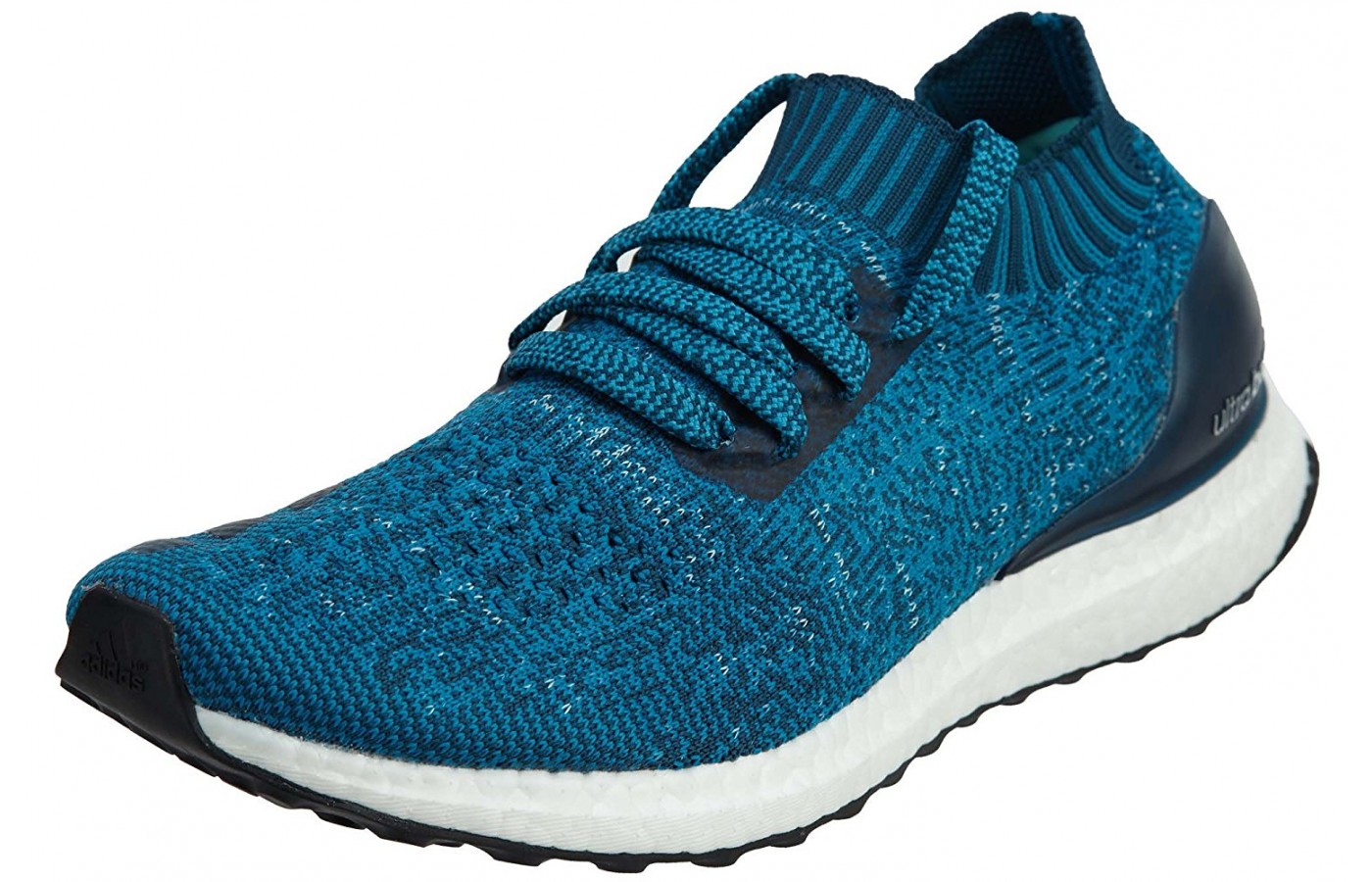 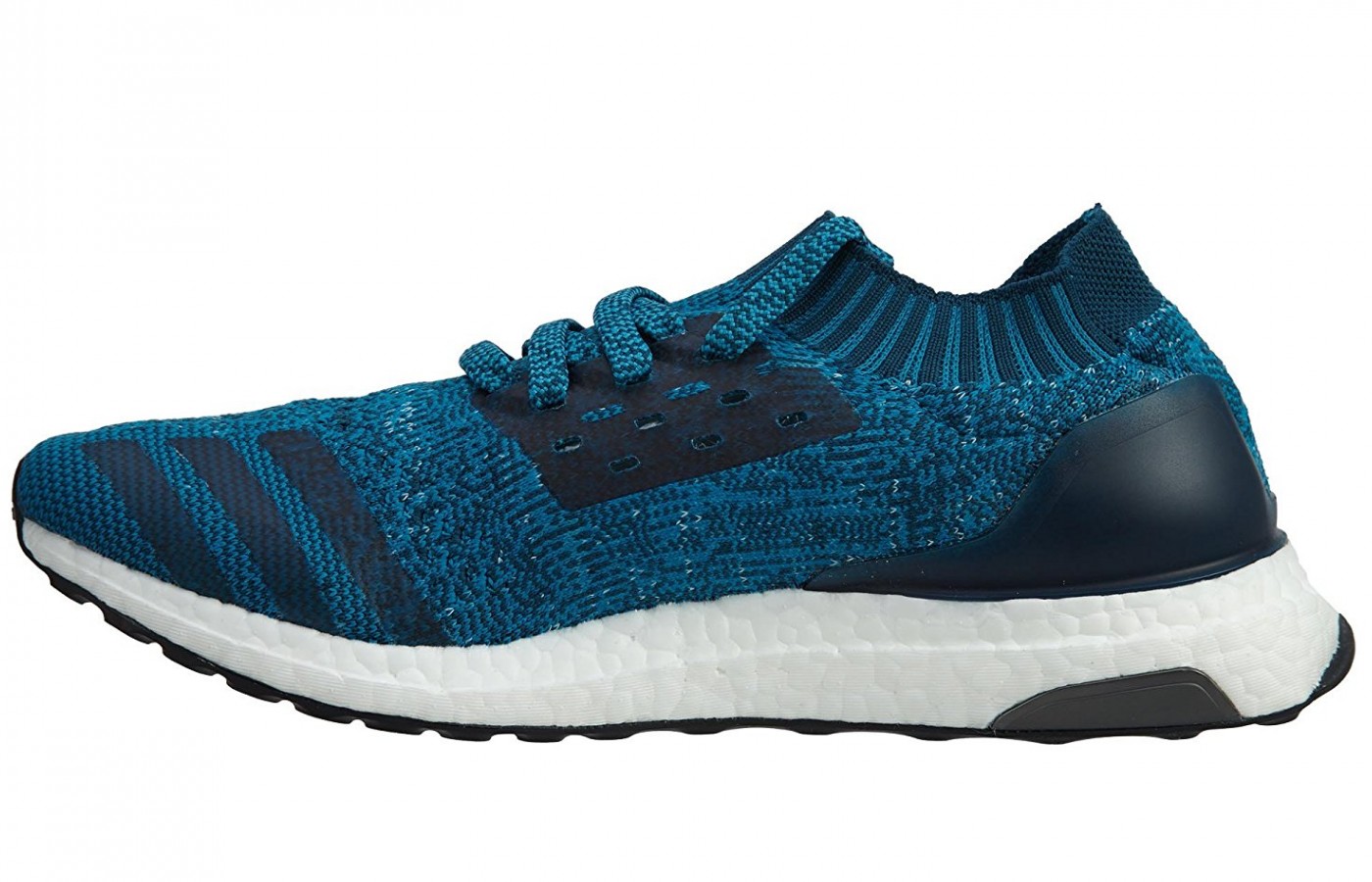 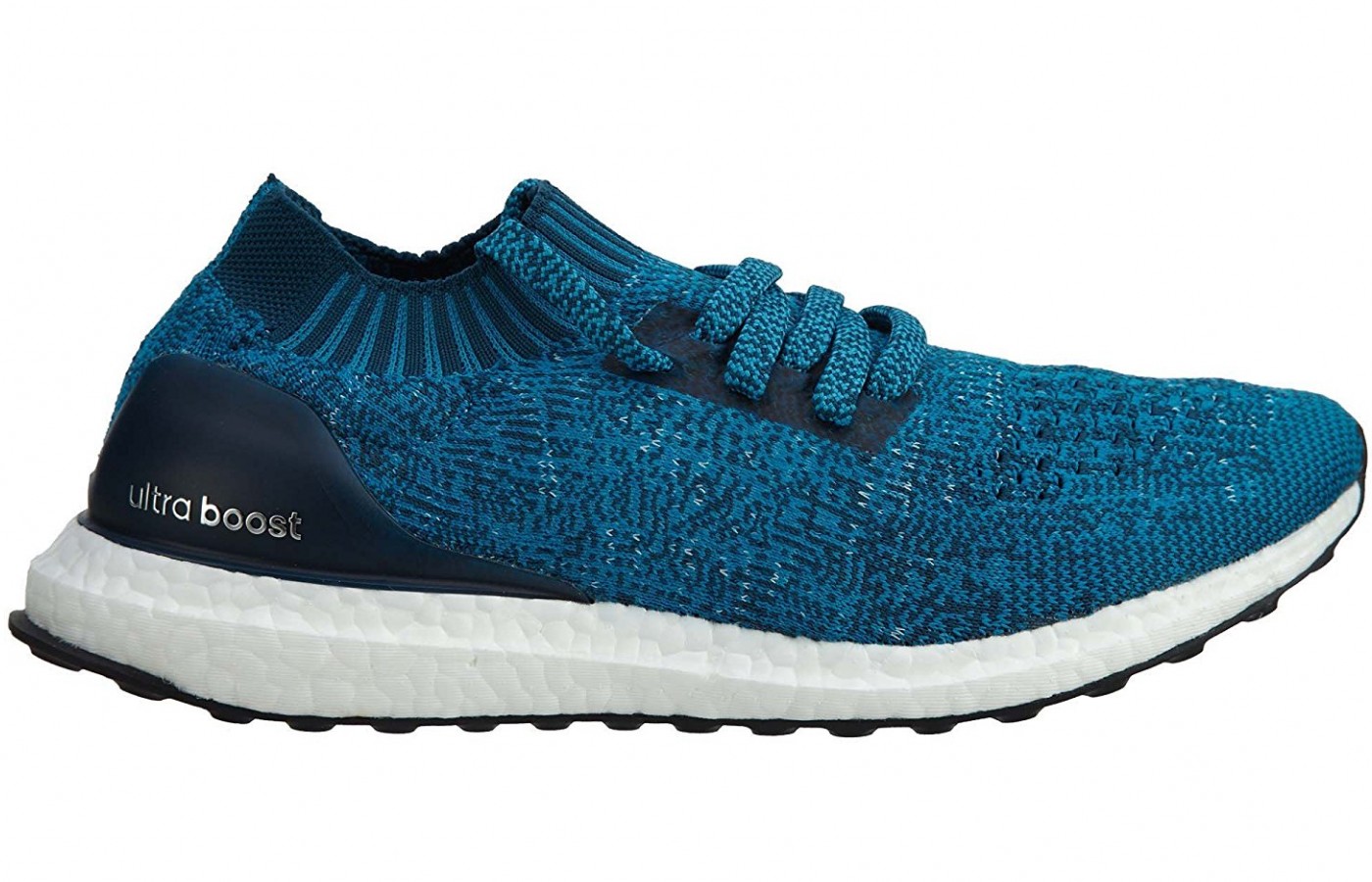 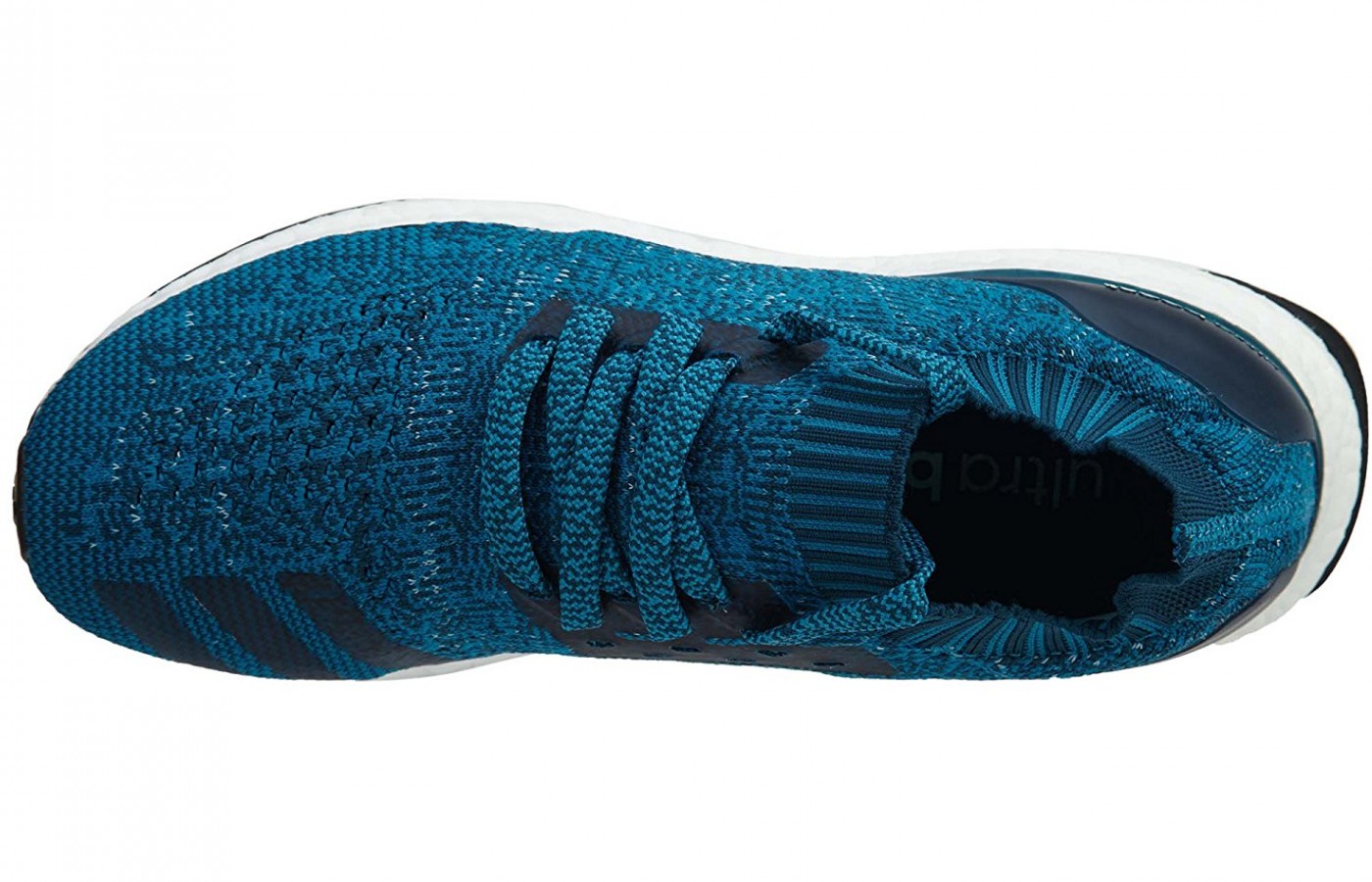 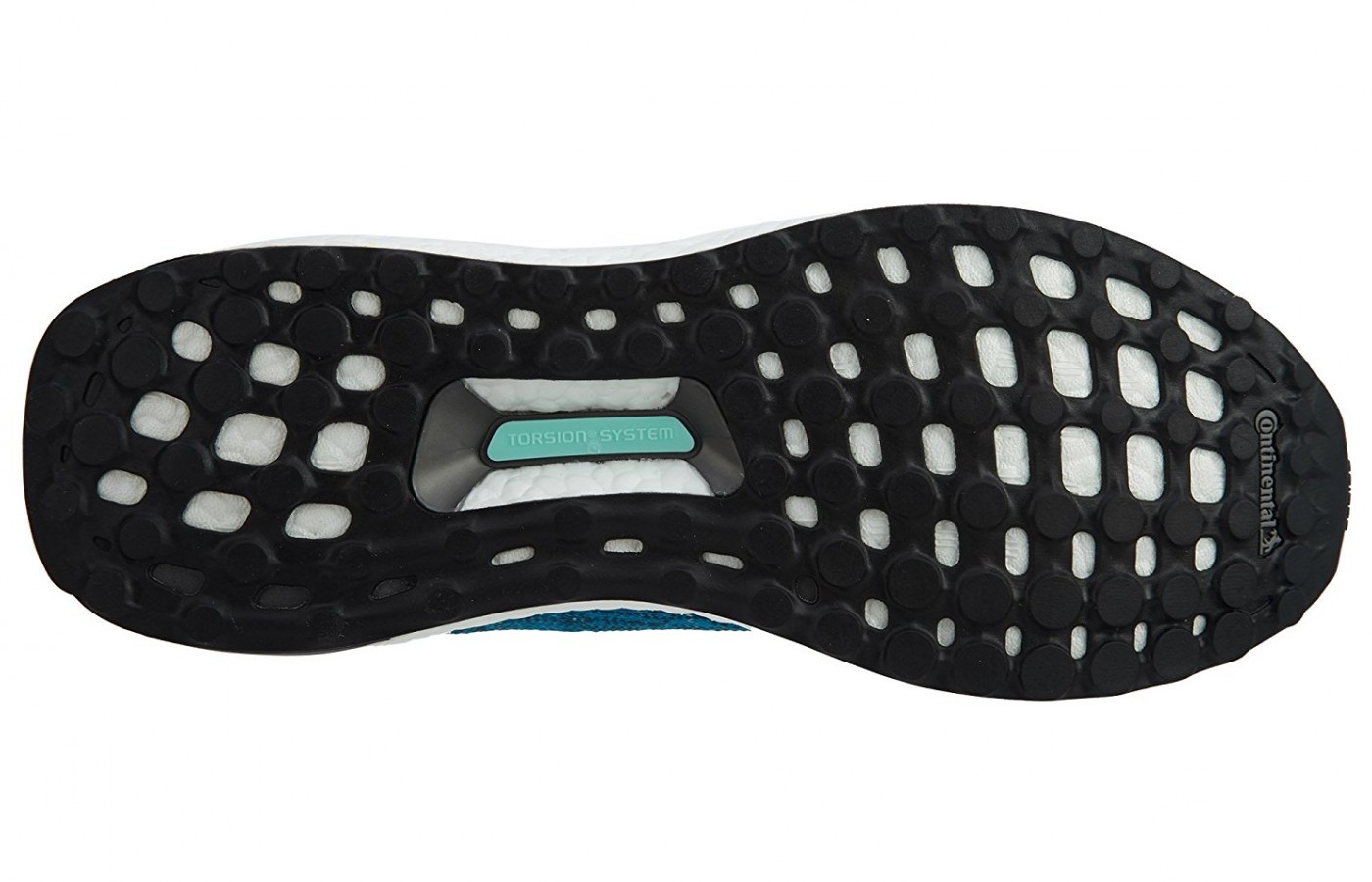 8.9
8.9 score
(WalkJogRun) score (8.9)/10
Our WalkJogRun score is based on 3 different factors: Editor's rating after in-depth testing. User ratings submitted on this page Overall score from the "reviewmeter" based on reviews across the web the weight of each factor is: 40% editor rating 15% user ratings 45% reviewmeter.
2
Editor rating: 8.4 / 10

The Adidas Ultra boost uncaged is a better version of the initial adidas Ultra Boost. The shoe sports a full-length boost sole, hence the name the Ultra boost. On this shoe, Adidas has decided to take of the despised plastic covering that came on the previous model, which they didn’t fail to advertise in the name “uncaged”. Overall, it’s a decent running shoe, and with design of the shoe, would make an even better comfort, relaxation shoe.

We have spent 4.0 hours analyzing a total of 846 reviews.

Positive
Read more
Negative
Read more
Reviewmeter
The Reviewmeter shows you an overall score that you can easily refer to. The highest rating is 10 (100% positive feedback)
Of the 846 reviews we found in total, 7% were negative, and 93% were positive.
9.3
1
5
10

The outsole of the shoe is made of Adidas signature rubber, that was made to be durable enough to be used on rough terrains. Adidas honestly did some funky stuff with the outsole despite the minimal design that the first impression of the shoe gives off. The sole, as stated above is made from adidas’ usual hardened rubber, but they’ve fashioned it in a lug pattern as to give the shoe better traction gaining capabilities. On top of that, they’ve also carved out the midpart of the sole which benefits the flexibility of it as well as the weight.

The midsole on the Uncaged is straightforward; it’s made from Adidas signature boost material which is known for its responsive and lightweight nature . Not much has changed from the design on the initial UB, since it was also fitted with a boost midsole. The sole was also fitted with Polyurethane globules, which aid the boost in providing the smooth, walking on air-like ride that it’s known for.

The upper is where Adidas decided to work their magic at on the Uncaged. Obviously from looking at it, one can tell that Adidas has listened to their beloved customers and have forgone the “cage” that the previous shoe was known for; this, and the fact that the upper is made from mesh makes the shoe fit very snug and allows it to conform to the shape of the foot. As is seen on various other minimalist running shoes that Adidas has designed, the Uuncaged is fitted with a heel counter, which gladly adds a bit of support to this comfortable shoe.

The Adidas Ultra Boost Uncaged is extremely lightweight. Adidas has done a great job in taking off the extra things that weighed down the previous version of this shoe, resulting in a shoe that weighs very little. The Boost material that the shoe was made with weighs very little which adds to the lightweight affect that the shoe gives. Also, Adidas taking the “cage” off of this shoe has taken a lot of the weight that the older model had. All of these things have resulted in a shoe that weighs a whopping 5 ounces less than the initial version.

The Uncaged was made with minimalism in mind which is one of the reasons why this shoe has such great air circulation. The shoe is made from a mesh material of Adidas design, which promotes air circulation and comfortability; it is porous in such a way as to prevent the trapping of air in the shoe, which over time results in the wearer dealing with a variety of unpleasant things. The lack of restrictive devices gives the shoe the shoe the air circulation that it needs while it’s in use. On top of these things, the mesh that the upper is made with is also relatively thin which boosts the already porous nature that mesh is known for having.

The original version of this shoe was a comfortable one, having taken the cage off of the shoe Adidas made it even better. As stated above, the shoe is made from a mesh material which is known for being relatively comfortable; Adidas added their own spin to the mesh make of the shoe by making it out of a blended fabric-like material rather than the well-known synthetic plastic-y blend that shoes are usually made with. The boost material that the Uncaged is made from adds to the shoes’ overall comfortability due to its conforming nature; it is extremely responsive and plush. One thing that can be said is that the seam on the heel of the shoe is rather uncomfortable; this is only noticeable if the shoe is worn without socks though. Other than that little blip, Adidas did a really good job in creating a comfortable shoe.

The Uncaged has one of the most minimalist designs that’s been seen in a while. Without the cage that the predecessor of this shoe had, the Uncaged is a very attractive shoe. The style of the shoe makes it more versatile in terms of what it can be worn with and for; such as during sporting events and for everyday use. The upper being made with one type of fabric and lacking much covering (the only one coming in the form of a heel counter) makes the shoe blend in with the minimalist nature that shoes generally have nowadays.

This is another category that the Uncaged has been upgraded in compared to its predecessor. The outsole of the shoe, rather than being made from the regular hardened rubber that the original sported, has been given the Continental Tire guarantee. Adidas formed a partnership with continental tires in that they agreed to supply a hardened type of rubber that is more durable than the majority of rubbers that are on the market. This hardened rubber allows the shoe to be used for several more miles than the original; 300 to be exact. The upper and the rest of the overall shoe has quality craftsmanship that also boosts the shoes rating in the durability category. Overall, the Uncaged is made from decent materials and was put together in such a way as to be able to be used for a decent length of time without having to worry about getting a replacement.

Here is a category where the Uncaged may falter a bit. Adidas failed to give the shoe much in terms of protection for the user’s foot. The only covering that the upper has is the heel guard which doesn’t do much because of the fact that its sole purpose is to protect the user’s heel. The lack of the cage on the shoe means that the user doesn’t really have the forefoot protection that wearers of the shoes’ predecessor had. Aside from the shortcomings that the upper on the Uncaged has, the sole on the shoe is relatively thick meaning that it should be able to protect the wearer from whatever it is that the terrain throws at it.

The Uncaged isn’t the cheapest shoe in the world, that’s for sure. Considering the technologies that the shoe comes equipped with, the shoe being on the expensive side isn’t the worst thing in the world. Depending on what one is looking for in a running shoe, it probably wouldn’t make the most sense to purchase this shoe; this is only because the Uncaged lacks a few things in the stability area that a few other shoes of its caliber hold. On the other hand, if one is looking for a versatile shoe, one that can be used as a running shoe while also being attractive, then the Uncaged could be considered.

The traction that the Uncaged provides is nice to say the least. The shoes Continental rubber-made sole is designed in such a way as to promote grip on a variety of surfaces; it is fashioned into lugs which, enable the shoe to provide a decent amount of grip and to prevent slippage. The make of the sole itself also aids it in its ability to provide a decent amount of grip, mainly due to the nature of rubber.

Another area that the Uncaged scores well in is flexibility. The Boost that runs the length of the sole is flexible by nature; a side effect of the responsiveness that the Boost is known for also makes it relatively flexible, meaning that it is able to bend in various ways without being damaged. The upper on the shoe, being made from mesh without having all of the extra coverings promotes flexibility as well; seeing as it’s only made from woven fabric, it is able to bend and conform to the shape of the users foot with minimal effort.

Another area that the Uncaged doesn’t score the best in is stability. Adidas’ removal of the covering on the shoe leaves only mesh to make up the upper. This isn’t the worst thing considering that it is snug fitting while being worn for leisure, but when being worn for athletic purposes, the mesh isn’t quite enough. The mesh being just that, mesh, makes the shoe be a bit more loose when being used at higher speeds; it allows the foot to move a bit more which, when running which isn’t necessarily a good thing. The wide sole on the shoe gives the wearer ample footing when the Uncaged is in use providing the wearer with a decent amount of stability in that respect.

The Uncaged sports a 10mm heel-to-toe drop, which only enhances the shoes already outstanding ride quality. The rise in the heel of the shoe aids in the transition that one feels while the shoe is in use; this coupled with the decent technology that the shoe has in the sole is what aids the shoe in providing an amazing overall experience.

Overall, the Ultra Boost Uncaged is a nice shoe. The removal of the cage from this shoe improves its overall flexibility and promotes comfort. On top of that, Adidas fashioned the shoe with a decent amount of boost in the sole which does a great job in delivering a responsive and comfortable ride. The continental rubber gives the shoe decent traction gaining abilities which, when coupled with the patterning of the sole results in a durable and versatile shoe. Other than the hefty price tag, not much bad can be said about this shoe. Good job Adidas. 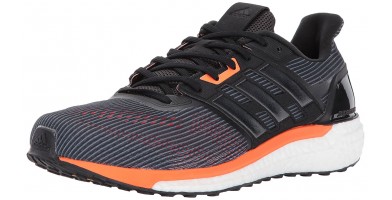 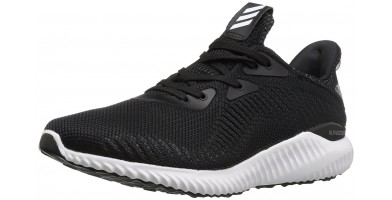 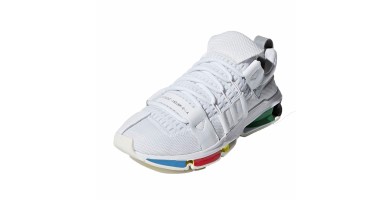