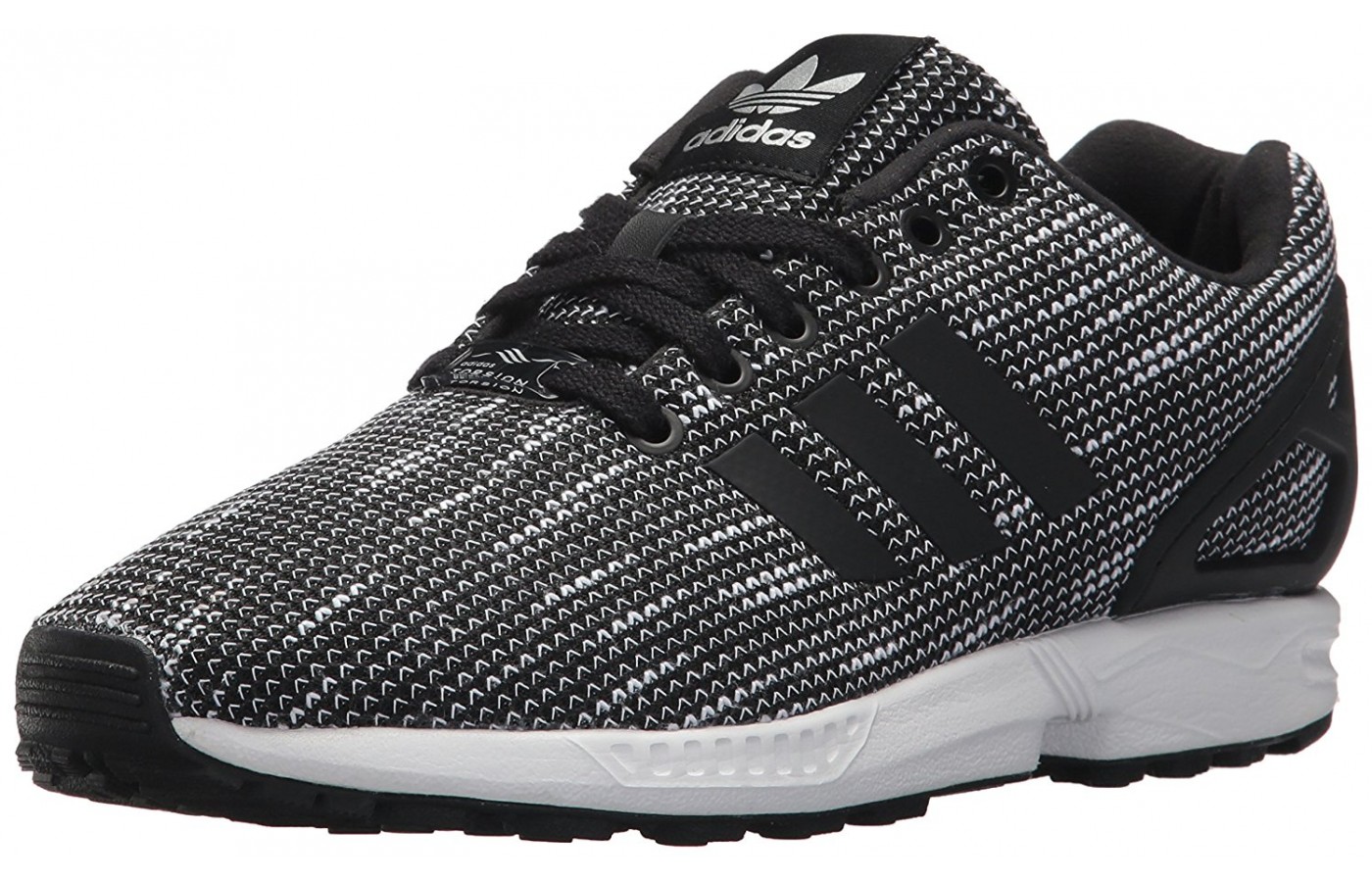 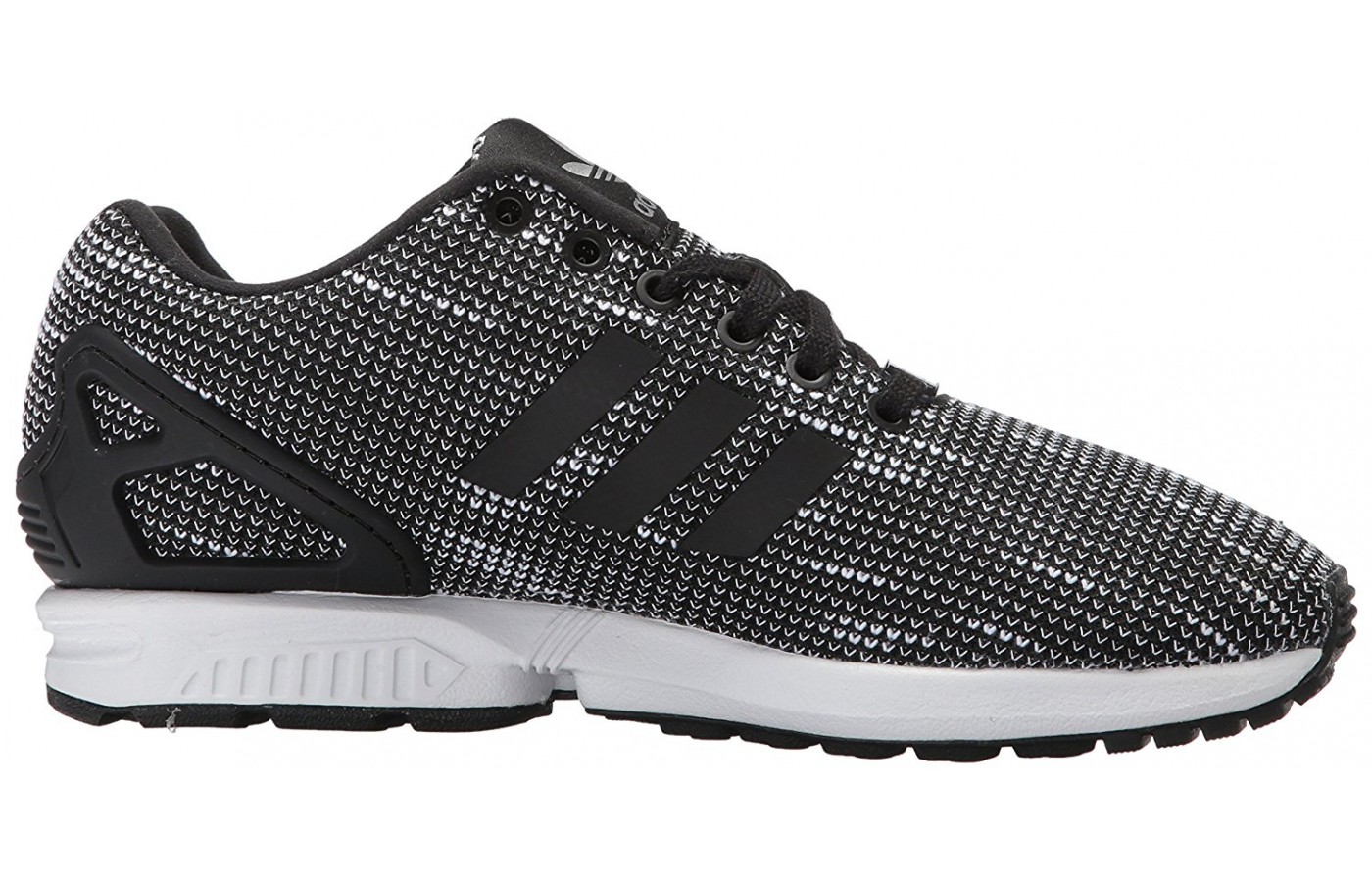 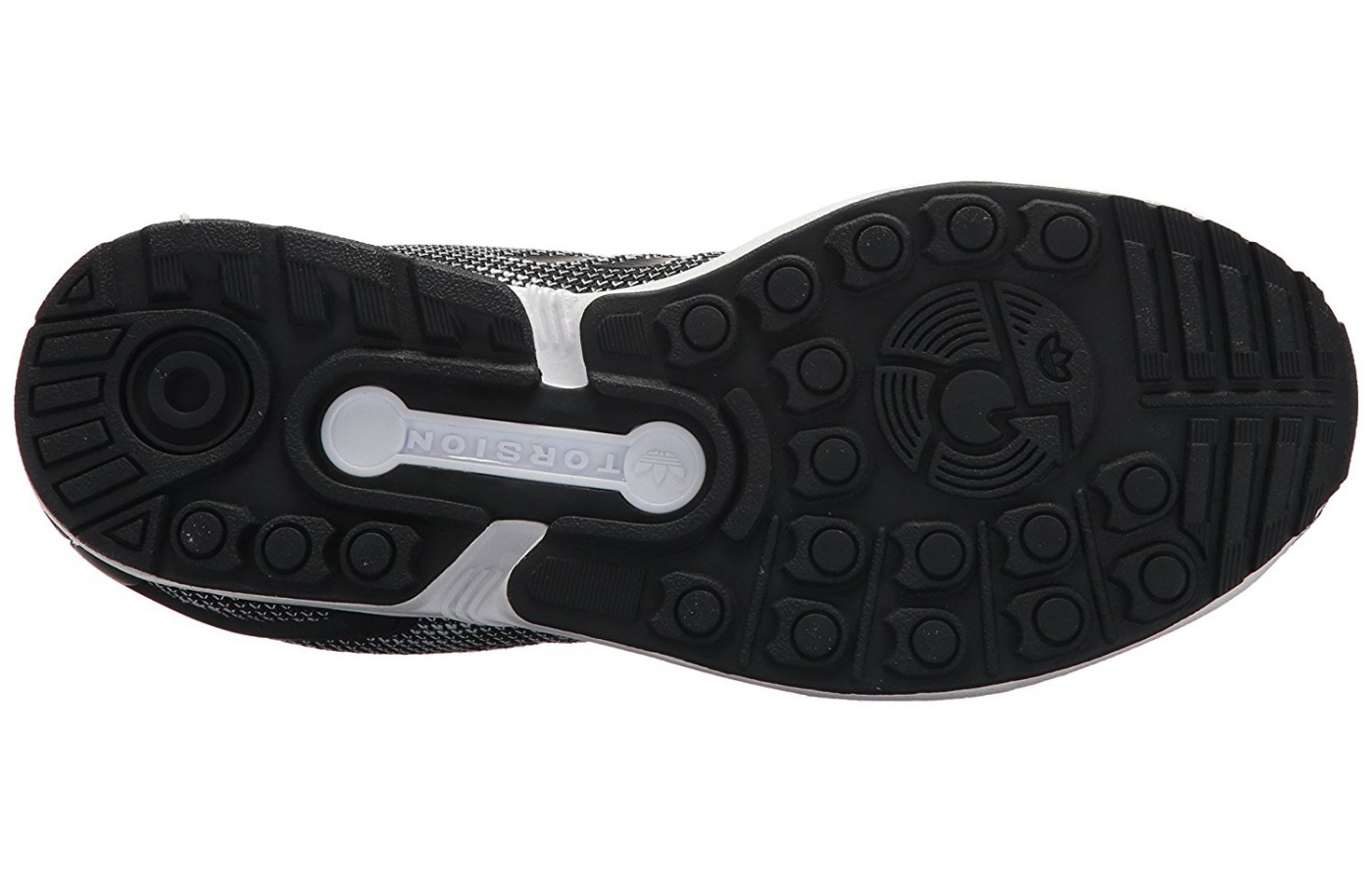 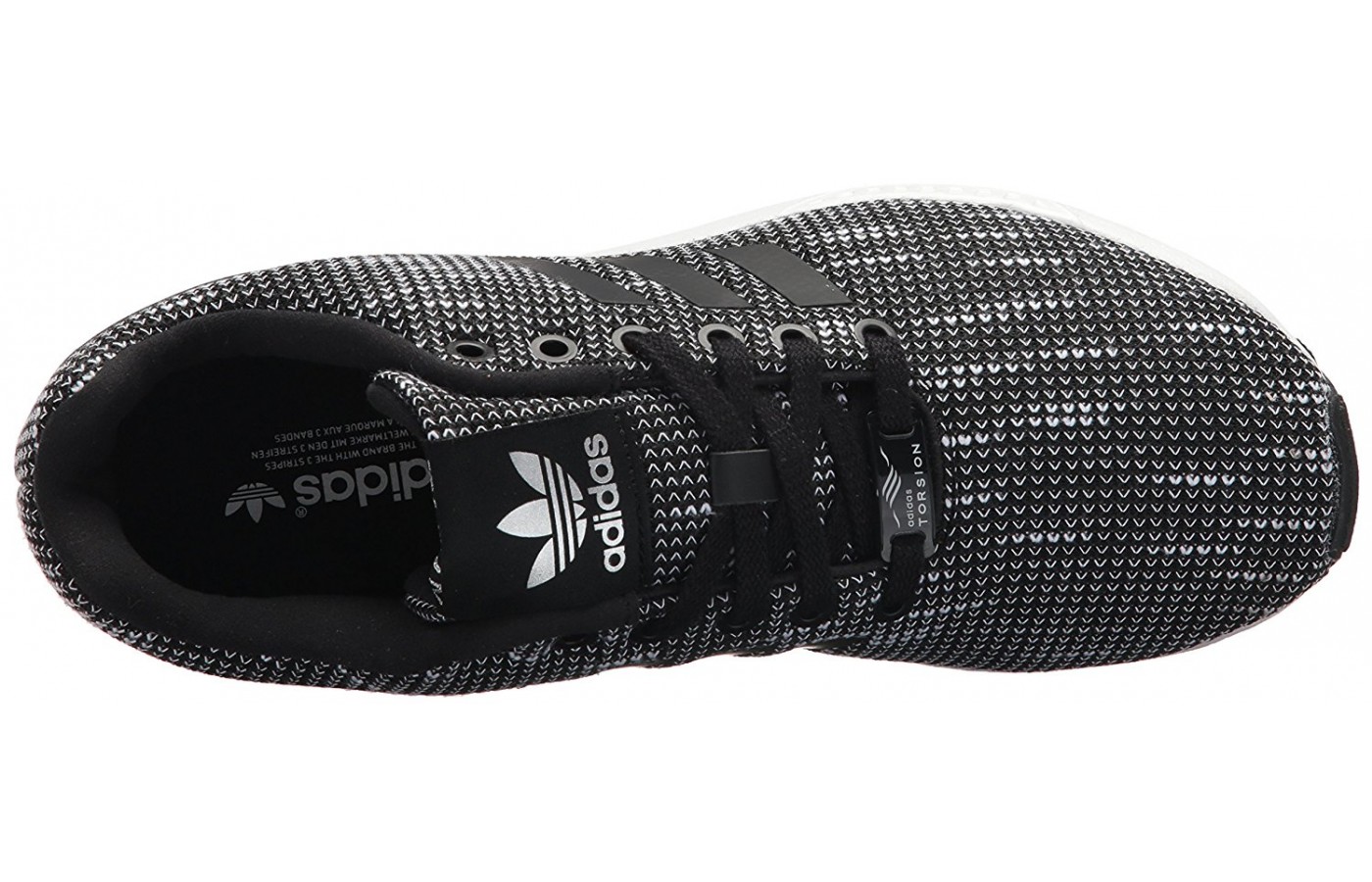 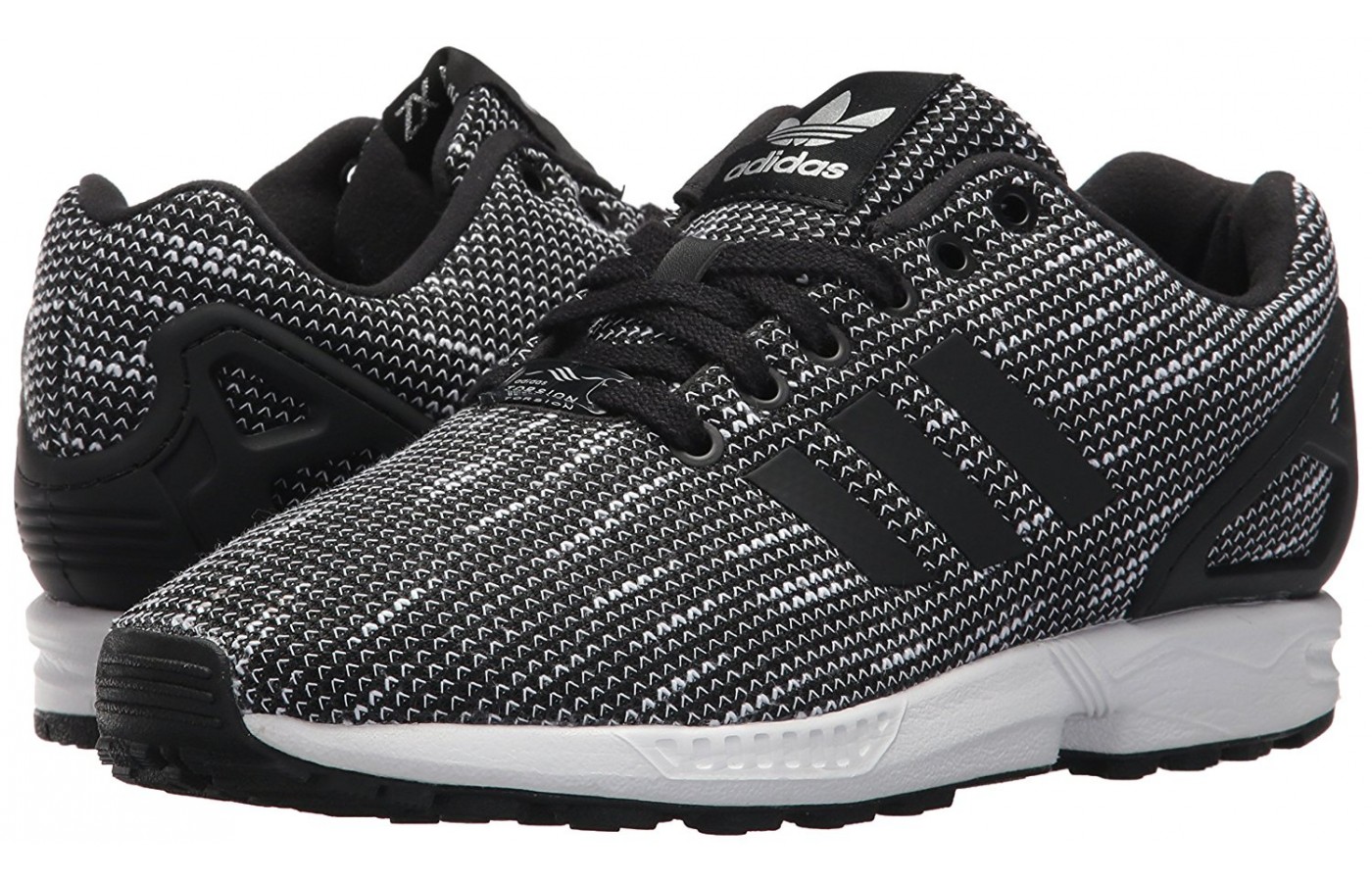 The Adidas Zx flux features several material updates that enable it to have improved functionality and flexibility. The shoe features a seamless mesh upper which enables the shoe to conform to the user’s movements and provides very few restrictions to the users’ natural curves of the foot. The shoe also features a mesh upper which allows the shoe to have enhanced rebounding and provides improved comfort to the wearer of the shoe. The shoe is definitely in line with the other shoes in the Adidas Zx line of shoes mainly because of the updates to the overall design and the shoes ability to provide an overall comfortable ride in a variety of conditions.

The outsole of the Adidas Zx flux is definitely a sight for sore eyes. The shoe features a hardened rubber outsole that provides both outstanding traction and durability. The durability added by this material is outstanding, it is able to hold up for several thousand miles without needing replacement. The sole has also been patterned in such a way as to promote both flexibility and grip; it features pods on both the forefoot and the hindfoot which enable the shoe to be able to able to achieve a level of grip above that of a variety of shoes in the Adidas Zx flux’s category of shoes. The shoe also features flex grooves in between the forefoot and the hindfoot that enable the shoe to achieve a decent range of movement without compromising the shoe’s overall dexterity.

The midsole of the Adidas ZX flux is a single foam unit. This enables the shoe to deliver a decent level of bounce by providing a greater level of energy transfer. The midsole also features an Adidas Torsion unit which also aids the shoe’s overall energy delivery capabilities. This is because of the torsion unit’s ability to provide both arch support and free movement between the front and the back parts of the shoe. The foam make of the midsole itself also allows the shoe to achieve a decent level of movement, and because of the foam’s midrange level of firmness, it is able to achieve this movement without putting the wearer at risk for rollover during a run.

The upper on the Adidas Zx flux is a thing of beauty as well to be honest. The shoe features a single mesh upper which imbues the shoe with the ability to handle the variety of movements without restricting the user’s foot in any way. The upper is also seamless, meaning that it is a single unit rather than a multitude of pieces sewn together. This improves the shoes overall aesthetics and enables the shoe to provide a more comfortable overall experience. It features plastic counters on the heel and, it must be mentioned that the material is reflective enough for the wearer to run at night with minimal visibility to issues.

The mesh upper on the Adidas Zx flux allows for a great level of air flow to be achieved by the shoe. The shoe features a single unit mesh upper, which also has very little in the way of coverings. The lack of coverings on the shoe means that there isn’t much there trap air in the shoe, preventing sweaty feet; this also allows the shoe to provide a great deal of comfort because of the lack of trapped sweat in the shoe.

In terms of comfort, the Adidas Zx flux has plenty. The Adidas Zx flux is fitted with a mesh upper that allows the shoe to achieve a great deal of comfort because of the materials ability to conform to the shape of the users foot; the material is also extremely breathable which improves the overall comfort provided by the shoe. The Torsion unit in the midsole of the shoe enables the front and back portion of the shoe to bend independently while also keeping up with the movements of the users foot. The sole is also made from a foam material that provides a great deal of comfort to the wearer mainly because of the materials overall responsiveness.

Now, the Adidas Zx flux is definitely one stylish, aesthetically pleasing shoe. The shoe features a seamless upper that is also on the simmer side; this blends in with the style of today’s shoe’s and gives the shoe a level of versatility above that of various other shoes on the market. The sole of the shoe is comprised of a mix of both hardened rubber and foam, which adds to the minimalist effect that the shoe was given. The upper also features very little in the way of coverings which aids the shoe in it’s minimalist effect and also allows makes the style of the shoe seam almost effortless.

One thing that seems to always be said about the Adidas ZX flux is that it is definitely on the more durable side. The sole of the shoe, despite lacking any rubber material holds up very well on a variety of surfaces. On top of this, the material is able to take a decent level of pressure without losing its shape, further improving the shoe’s longevity. The upper on the shoe, being a single piece of mesh, is well-crafted. The material is thick enough to keep up with the longevity of the sole without taking away from the materials breathable nature.

The Adidas ZX flux has relatively few protective features in the design. The upper of the shoe is pure mesh with change up in the material being the plastic heel counter and the Adidas stripes on the side of the shoe; this should be considered when one is looking for a shoe that can handle the rougher terrains because the upper won’t do much to stop the impact of the rougher materials. The sole on the shoe on the other hand is dense enough to provide a decent level of protection for the bottom of the wearer’s foot meaning that they won’t have much to worry about in that respect. Another thing that should be mentioned is the addition of the reflective lights on the shoe; the reflective lights provide the wearer with a certain level of visibility in dimly lit areas.

The sole of the Adidas Zx flux is definitely responsive in all meanings of the word. The foam material that makes up the sole unit of the shoe is made in such a way as to promote bounce and to move with the users’ movements; this means that the material hands well under pressure and is also able send pressure that is placed on it by the wearer into the ride, resulting in an overall snappy ride. The torsion unit in the sole of the shoe also aids in providing an overall responsive ride, mainly because of the freedom of movement between the front and back of the sole unit.

In terms of terrain handling capabilities, the Adidas Zx flux does a decent job of being somewhat versatile. The sole unit of the shoe is definitely of the durable sort. This means that the shoe is able to be worn on a variety of surfaces with minimal discomfort and minimal slippage. The hardened rubber sole has been given pod-like extrusions, which allow the shoe to achieve a decent level of grip and also make it durable enough to last for a decent period of time as well. The upper of the shoe, being designed from mesh won’t work that well on the wetter terrains mainly because of the porous nature of the material.

One thing that must be mentioned about the Adidas Zx flux is on the cheaper spectrum, when it comes to running shoes. The level of comfort and grip provided definitely add value to this overly inexpensive shoe. The addition of the mesh upper and the torsion unit in the mid sole also give the shoe another hint of flavor that would not have been there otherwise.

Another thing that should be considered when one is looking at the performance of the Adidas Zx flux is the level of grip that it achieves. The shoe also does a decent job of dealing with a variety of different levels of terrains and performs very well on each. The she is fitted with rubber pods throughout the forefoot and the hind of the sole which both do their jobs in providing the grip that is necessary for the shoe. Despite popular belief, the foam of the sole also does its job in aiding the grip achieved by the shoe, which is surprising but done by the shoe.

Again, the design of the sole and the torsion system in the midsole both aid the shoe in its efforts to provide a comfortable and flex-full ride for the duration of its use. The torsion system in the shoe allows both the front and the sole of to be able to move independently of one another. This aids the shoe in providing a comfortable ride for the duration of it’s use. The mesh make of the upper also gives the shoe a decent range of movement, mainly because malleable nature of the material overall.

The Adidas Zx flux does a decent job of providing stability for the user’s feet. The sole of the shoe is somewhat firm and on the wider side, giving the wearer a decent amount of space for them to land on during their ride in the shoe. The torsion unit in the sole’ ability to allow both the heel and the forefoot of the shoe to move independently of one another does a great job of increasing stability because of the increased reaction time that it provides for the user.

The heel-to-toe drop on the shoe hasn’t been given for the Adidas Zx flux but it must be relatively high. The sole unit of the shoe is pretty thick, and the amount of foam in the heel unit of the shoe is also on the thicker side. On top of this, the heel of the she is where the padding is the least plentiful. This high rise in the heel accompanied by the freedom of movement that the torsion system allows enable the shoe to achieve decent overall transitions.

In terms of weight, the Adidas Zx flux holds relatively little. The shoe is designed out of majority lightweight material, which when combined do very little to add to the overall weight of the shoe. The addition of the lightweight foam to the sole of the shoe and mesh upper add very little to the overall design of the shoe; this means that the shoe can be worn for a variety of events and provide the wearer with a level of speed in decision making above that of other models of shoes.

Overall, Adidas did a great job on the design of this shoe. The mesh upper of the shoe allows for it to achieve a decent level of breathability and functionality at the same time. On top of this, the sole unit is designed in such a way as to promote freedom of movement while not being flimsy and allowing for rollover while the shoe is in use. The price of the shoe justifies the technologies present, and, once the style of the shoe is considered it adds even greater value to the shoe overall. 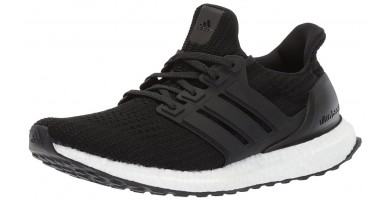 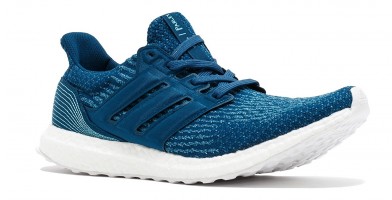 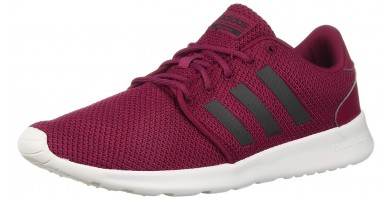