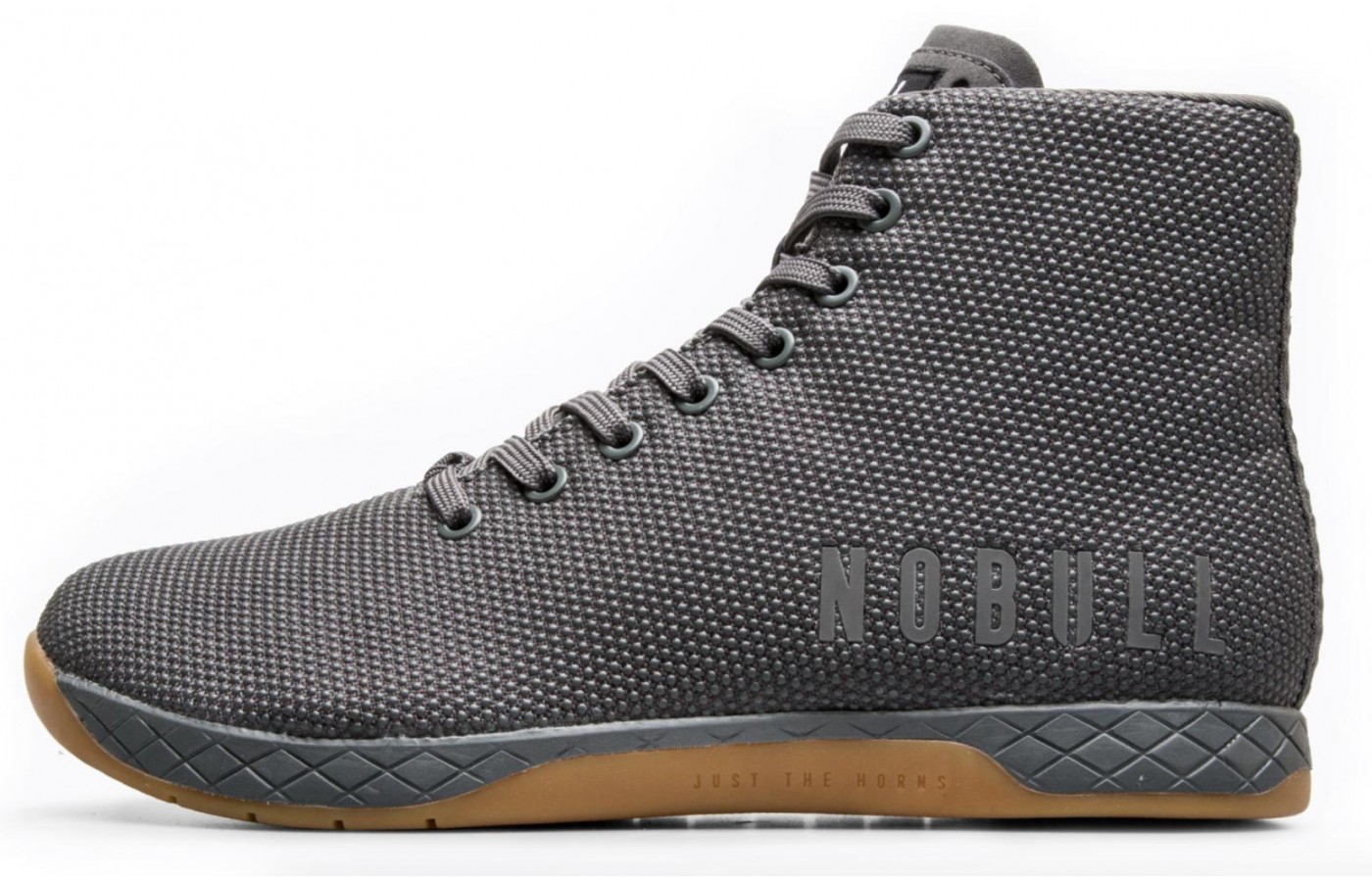 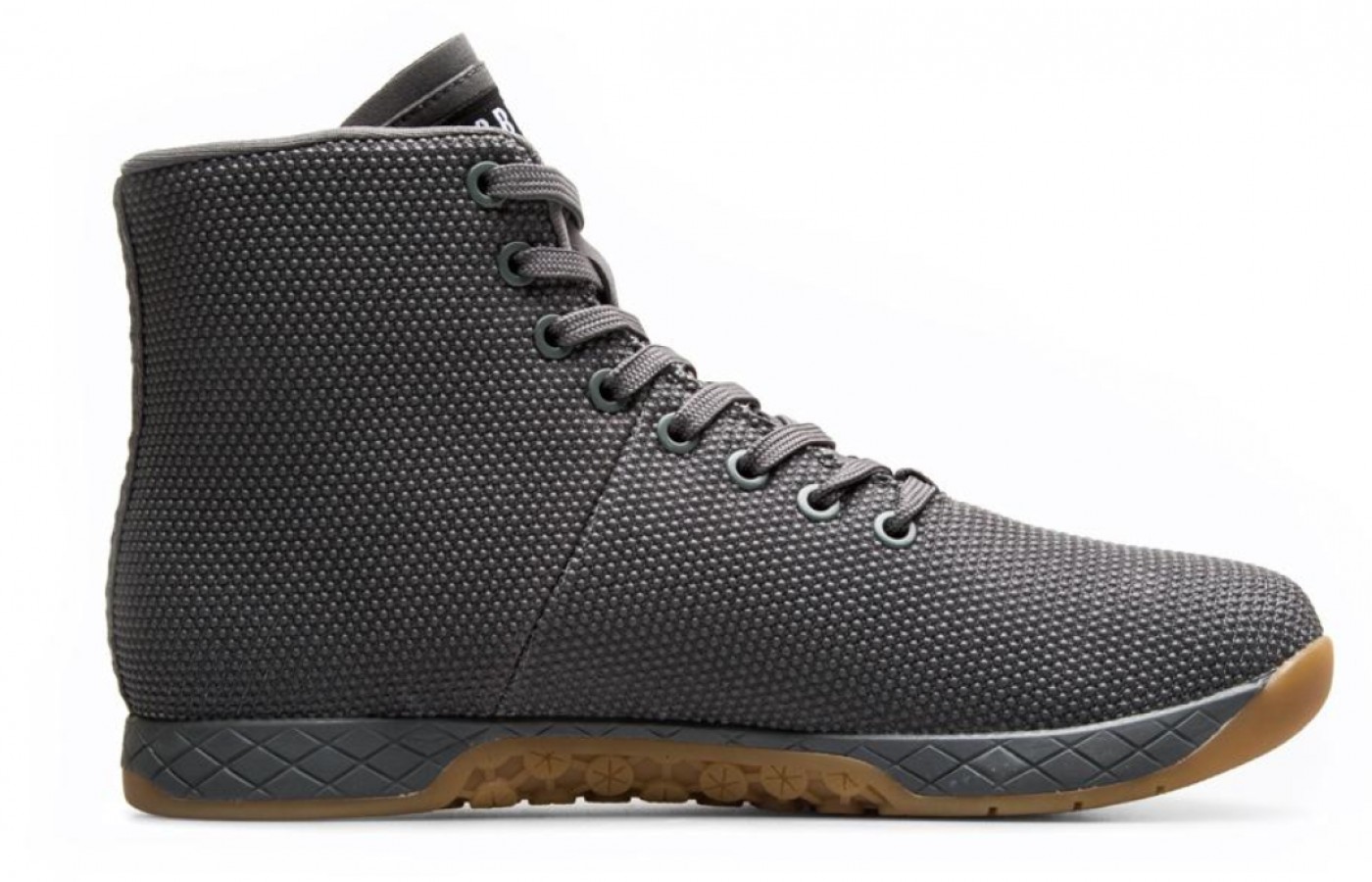 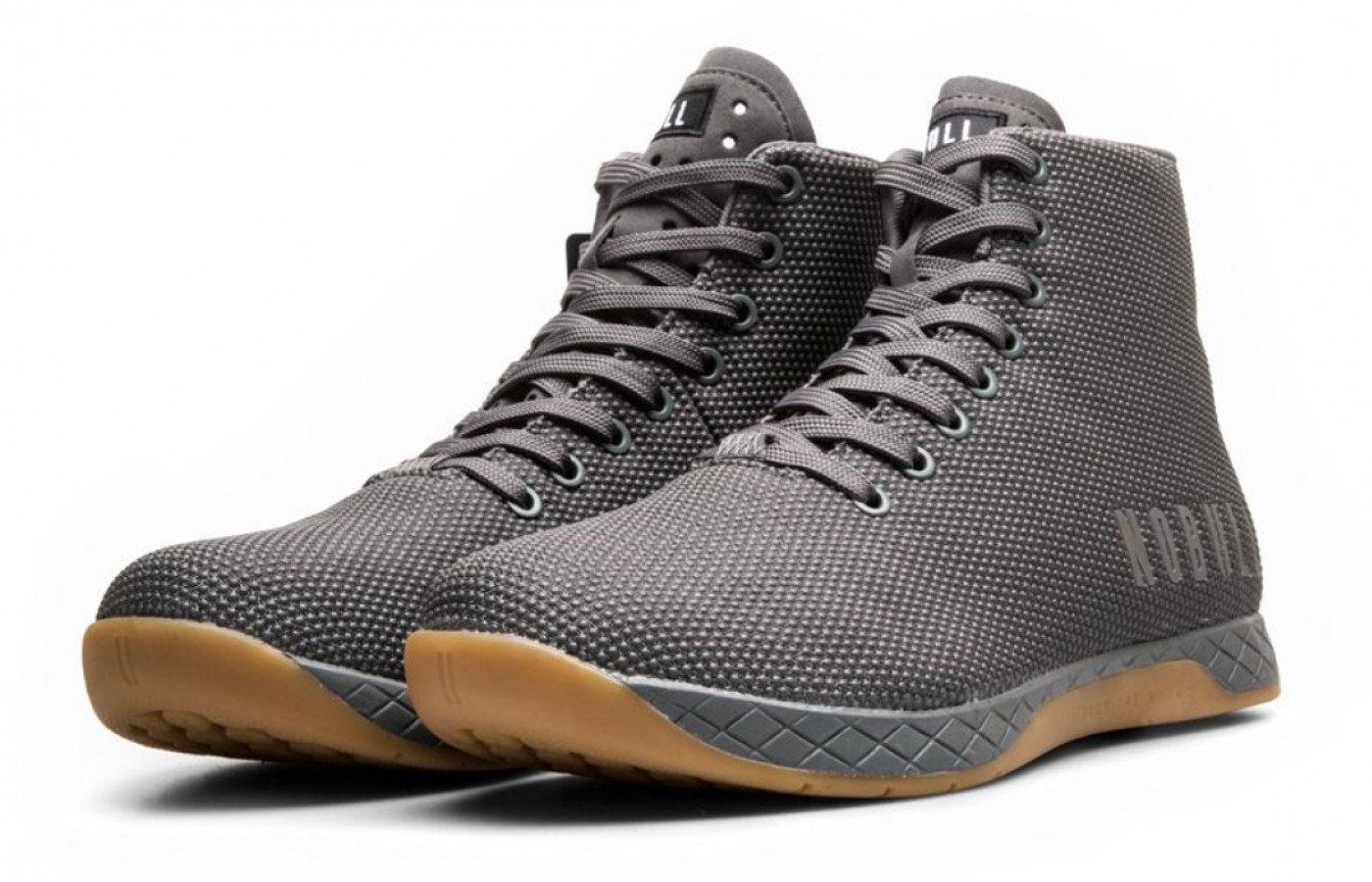 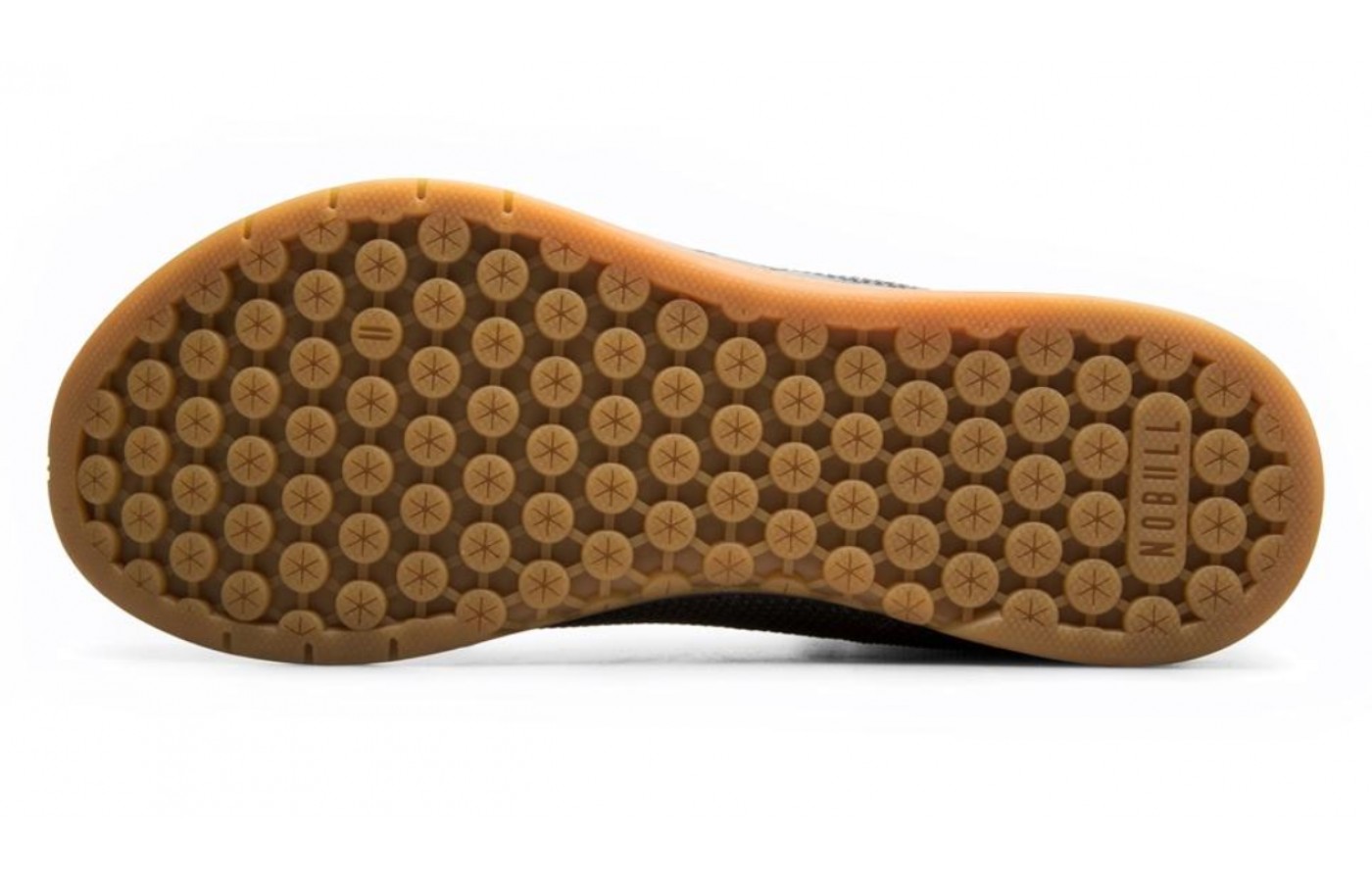 Nobull isn’t one of the brands that we see every day; they’re new and have made their way into the athletic shoes market as if by force. They have sleek and stylish shoes created with just a splash of creativity. Each and every one of their shoes is made with just the right blend of materials and a design that allows them to excel when worn in athletic environments. For this very reason, their shoes are known for being used for much more than just typical exercise routines. They work incredibly well for routines that involve HIIT exercise as well as for powerlifting/ weightlifting routines.

Most high-intensity shoes like the NOBULL high-top have rounded outsoles and thus, have designs that are applicable to various types of activities. Those shoes are what many would consider purebred cross trainers. On the other hand, the design of the No Bull is meant for use for mainly weight lifting; this means that the shoe’s outsole must be relatively flat. In order to achieve optimal efficiency when powerlifting, a shoe must be able to provide wearers with adequate room for toe splay as well as a range of motion; these are things that the outsole on the High Top provides to wearers. In addition to this, the outsole is designed from a rubber material and is relatively thin.

The NoBull High Top has a midsole which is adequately cushioned yet still surprisingly minimal. These shoes work extremely well for plyometric movements like Box jumps, runs and things of that nature simple because of the minimal design and the added cushioning that it in place throughout the design. In addition to this, the shoe features carbon plating along the side walls of the shoe which enable wearers to have what they need in terms stability as well as durability while the shoe is in use. No material has been specified by NOBULL but, the midsole appears to be made from a foam material.

The upper of this high top is designed from a material of NOBULL’s own design. Aptly titled “SuperFabric” this material is relatively breathable and is lightweight as all get out. The SuperMesh material provides wearers with adequate comfort and is also designed to have highly-abrasive qualities. These qualities typically transfer and work to the individual’s benefit while they are in use. The upper has a high-top design which enables them to provide adequate support to the wearer’s ankles as well as increases the quality of the fit.

No specific weight has been given for these shoes but, from what can be noticed they appear to be relatively lightweight compared to other trainers. They have a minimal design that stems from the cut of the outsole and the lack of pronunciation in the midsole of the shoe. The upper’s SuperFabric is meant to (and is) be relatively breathable which also implies that it won’t be as noticeable while on the foot. While the shoe does appear to be on the heavier side of things, they are anything but. The materials used in their design let wearers know that ease of movement was one of the highest things on NOBULL’s priority list in their design.

These shoes have an appearance that makes individuals want to consistently wear them, even out of the typical gym environment. They come in various color schemes; from plain black, all the way to camo. The blend of color schemes as well as the design of the shoe itself(the cut), makes these a shoe that many individuals crave and are willing to wear. On that same note, the style of the shoe includes the activities that the shoe itself is actually used for. NOBULL shoes are typically used for exercise activities and work wonderfully on activities such as HIIT and Metcon.

The upper of the shoe is designed from a material named SuperFabric; it isn’t so named for no reason. The SuperFabric in the upper of this high top appears to be a mesh material that is dense on the outside yet porous enough to allow the wearer to have an adequate level of airflow while the shoe is in use. The inside of the shoe features a sock-liner which allows it to have a moisture wicking property as well. After a heavy-duty workout, the last thing that one needs is to feel as if they are walking around in a pair of soggy shoes (or socks); these shoes prevent that from happening.

The comfort provided by this shoe stems from various areas, the first being the upper fo the shoe. The upper is insanely padded and does a decent job of securing the wearer’s foot during use. The padding in the shoes upper has a feeling that is only enhanced by the high-top design of the shoe. The fact that the shoe has a high top cut allows it to provide the wearer with what they need in terms of fit and aids them while they are moving around in the shoe. The cushioning provided by the sole unit is stiff, yet comfortable enough to ensure that wearers have adequate comfort during their run.

While the area where the sole unit and the upper may be lacking in the area of longevity, the upper is definitely designed to last. The upper of the shoe is designed from a highly abrasive material that NOBULL has coined as SuperFabric. This material doesn’t rip as easily as the typical mesh material and will consistently provide wearers with a usage period that lasts during prolonged use. The outsole by itself does tend to last for relatively long periods though. The material in the shoe’s outsole manages to consistently provide wearers with a platform that they can use during their strenuous workout routines; believe it or not, this is an important element of a shoes design.

When it comes to protection, the entirety of this shoe’s design was meant to provide it. The upper of the shoe is highly abrasive; this implies that it won’t easily rip and that holes won’t mysteriously pop up. With that being said, the upper of the shoe is designed to work incredibly well and provide consistent protection. For starters, the upper is waterproof; this means that the material, when water splashes on it, won’t allow the liquid to just seep through. When doing functional exercises this will work incredibly well.

The midsole on this high-top falls somewhere between incredibly cushioned and slightly firm. This firmness is what one should seek in an exercise shoe, simply because of the fact that it aids in the actual lifting of the weight; the more cushioning that a shoe has, the more likely the shoe is to provide wearers with a “shifty” experience and no one wants a shifty feel from their shoe. With that being said, responsiveness is not one of the areas that this shoe shines in. The required firmness of the shoe takes away from the cushioning that the rest of the shoe could possibly provide.

Well, this is a high-top shoe; it’s bound to provide wearers with at least a semblance of support when they need it. With the high-top design, as well as the snug lacing of the shoe, the NOBULL high top provides wearers with what they need in order to feel completely comfortable in their shoe. The secure feeling that the SuperFabric provides also ensures that wearers have what they need in order to feel incredibly secure and comfortable while in the shoe.

These shoes have a durable outsole. The outsole can work on various terrain types, but it just doesn’t make the most sense to do so. The NOBULL high top is meant to be worn in a gym; they are functional cross trainers. Granted, they will work on the pavement (and will work wonderfully at that) but again, they are meant for high intensity workouts, not just running. The upper will work on various terrains as well, due to the sheer thickness that it has. Again, for the terrain (gym) that the shoe is designed to be used on, it definitely provides wearers with more than enough functionality.

The great thing about this shoe, NOBULL made sure to design them in such a way that they were, at the very least, affordable. The price tag that accompanies these shoes will definitely not come off as overwhelming, nor does it insinuate that these are low-value shoes; because they aren’t. These are a high-quality pair of shoes that consistently provide wearers with the value that they need from them when in use. NOBULL is known for designing shoes that will work for periods well-beyond that which is typical of weightlifting shoes. Even with the minor sole unit issue, these shoes will provide value that goes well beyond their pricing point.

In terms of traction, the shoes have an outsole made of the typical rubber material. This allows these hightops to provide wearers with adequate functionality when worn on the surface of their choice. The traction provided by these shoes stem from the design (patterning) of the outsole itself. The outsole is designed using a full-body circular pattern. This pattern, as mentioned, runs the length of the shoe’s design and allows them to perform wonderfully on the surface of their choice. The fact that the outsole is also designed from a rubber material allows them to provide wearers with what they need in terms of grip on various surfaces as well.

Flexibility (range of motion) may not be this shoes strongest area. The upper is incredibly thick, for starters. While this doesn’t take away from the functionality of the material, it does meant that it won’t move quite as easily as say, a shoe designed from a thin mesh material. Again, that is to be expected of a shoe of the NOBULL high tops design; it just isn’t meant for activities that require incredibly high ranges of motion. The outsole is very much the same way. It isn’t designed to provide wearers with the motion that they need to really function and move easily on various terrain types; the lack of grooves and the thickness of the material is what causes this.

If nothing else is to be said about this shoe, it will definitely provide wearers with a stable and secure range of motion while in use. The upper has that thick material incorporated into its design which allows the shoe to provide wearers with an adequate, if not unjustified, level of stability. The high top design of the shoe also allows it to provide wearers with a snug and secure feel while in use. The sense of security that’s provided by this shoe directly translates into a stable shoe design. When performing heavy lifts such as deadlifts and presses, that sense of stability is something that is well-sought after.

Lack of information on the drop of this shoe but, it can be said that it appears to be substantially lower than many shoes on the market. The design of the shoe’s sole unit is rather slim and needs to be for compound movements. While it may not be the most important thing for this shoe to provide smooth transitions, the fact that it appears to have a small drop does help it in other areas.

NOBULL is one of those brands that appears to start at a place of seemingly non-competition and then works their way up. At least it appears that way. Many of their shoes have designs which are meant to provide wearers with a secure feeling as well as a high level of comfort while in use. Don’t forget, these shoes are also meant to provide wearers with the security that they’d need in order to take full advantage of the space around them; they are definitely not your typical weightlifting shoes. 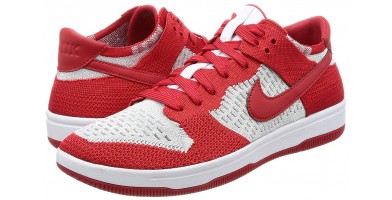 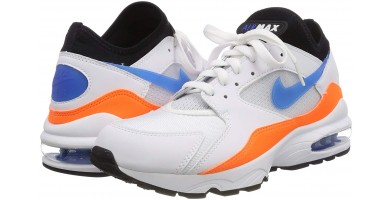 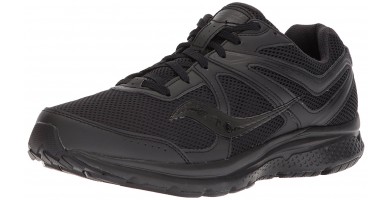