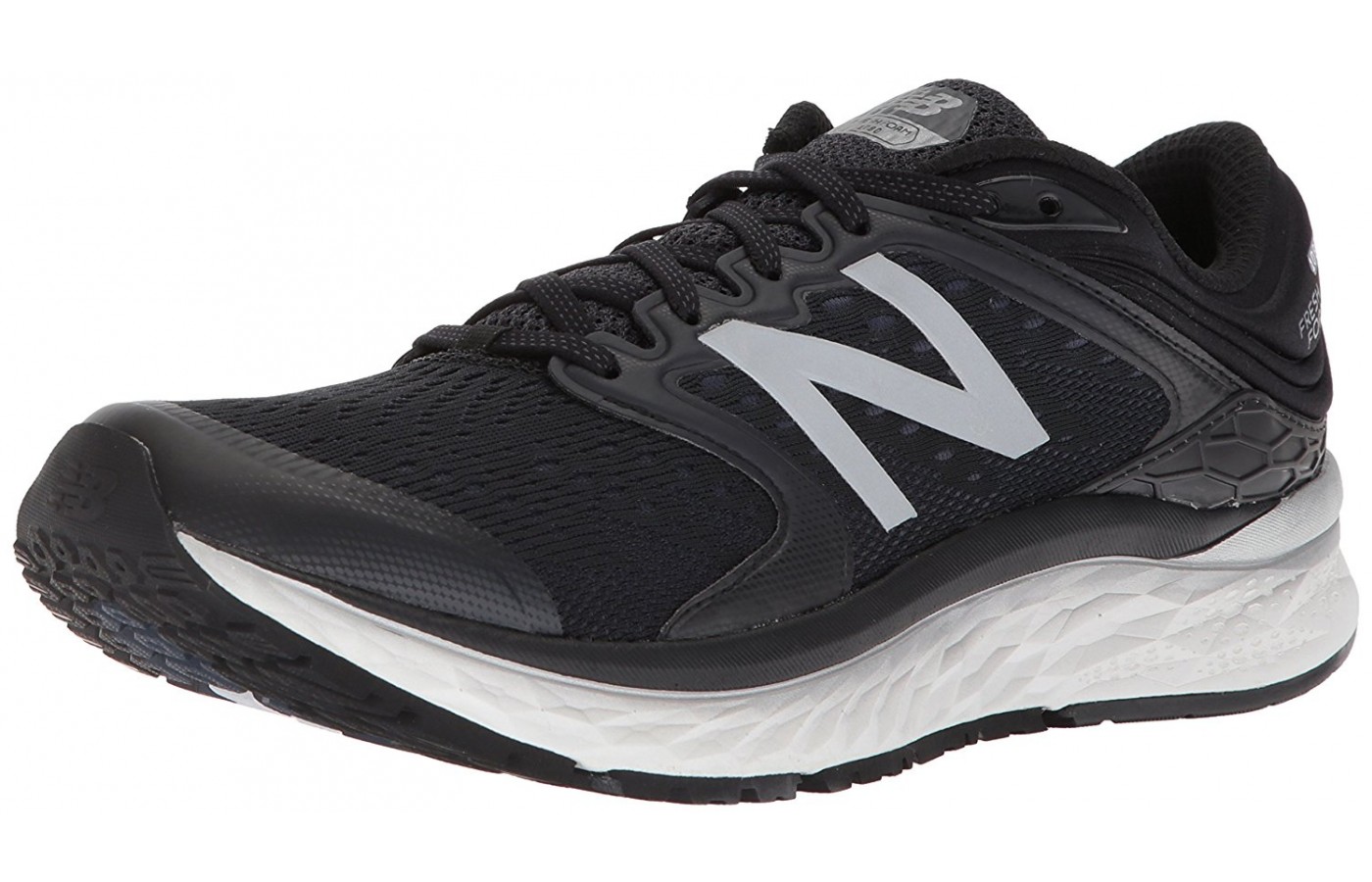 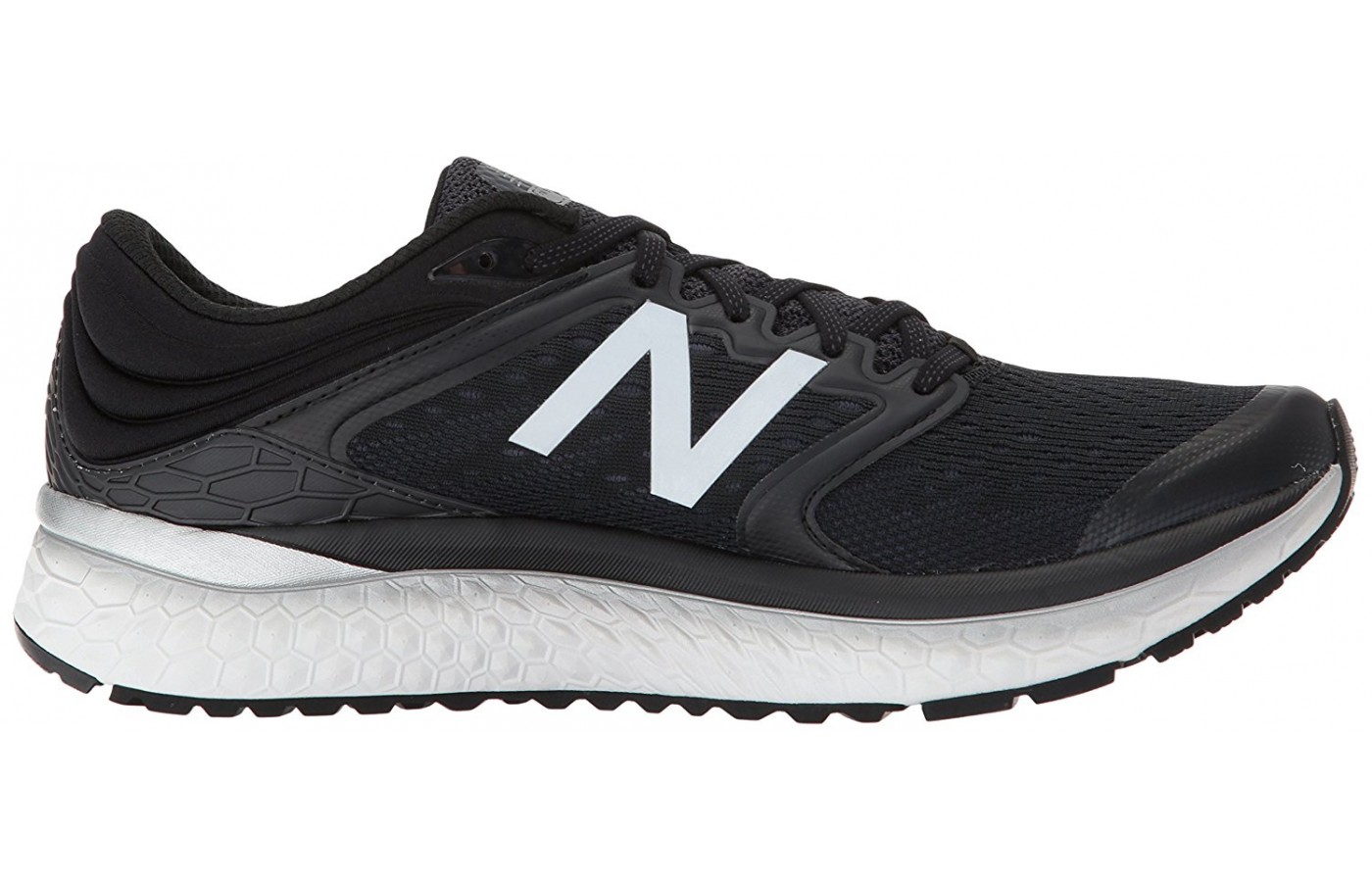 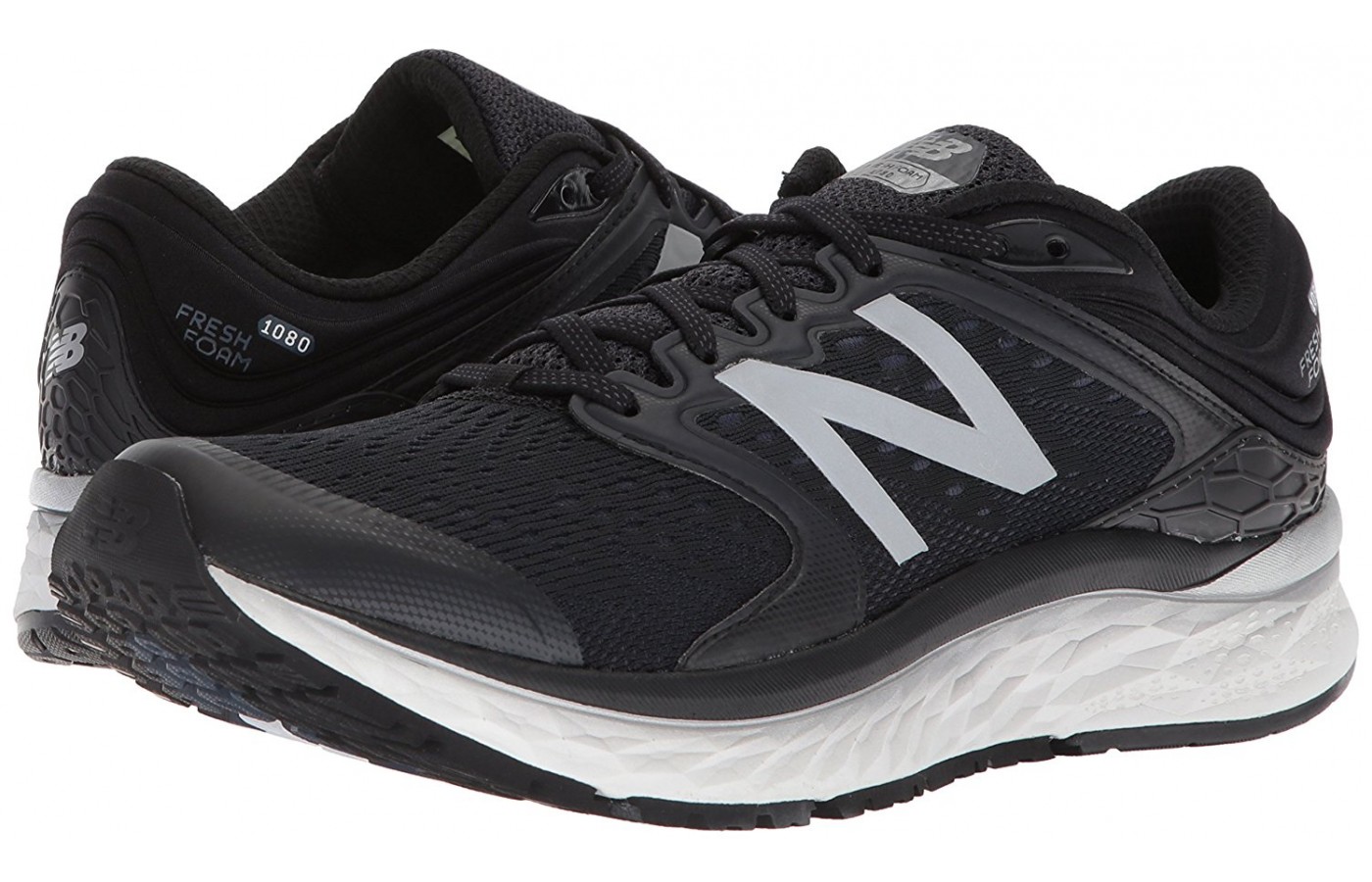 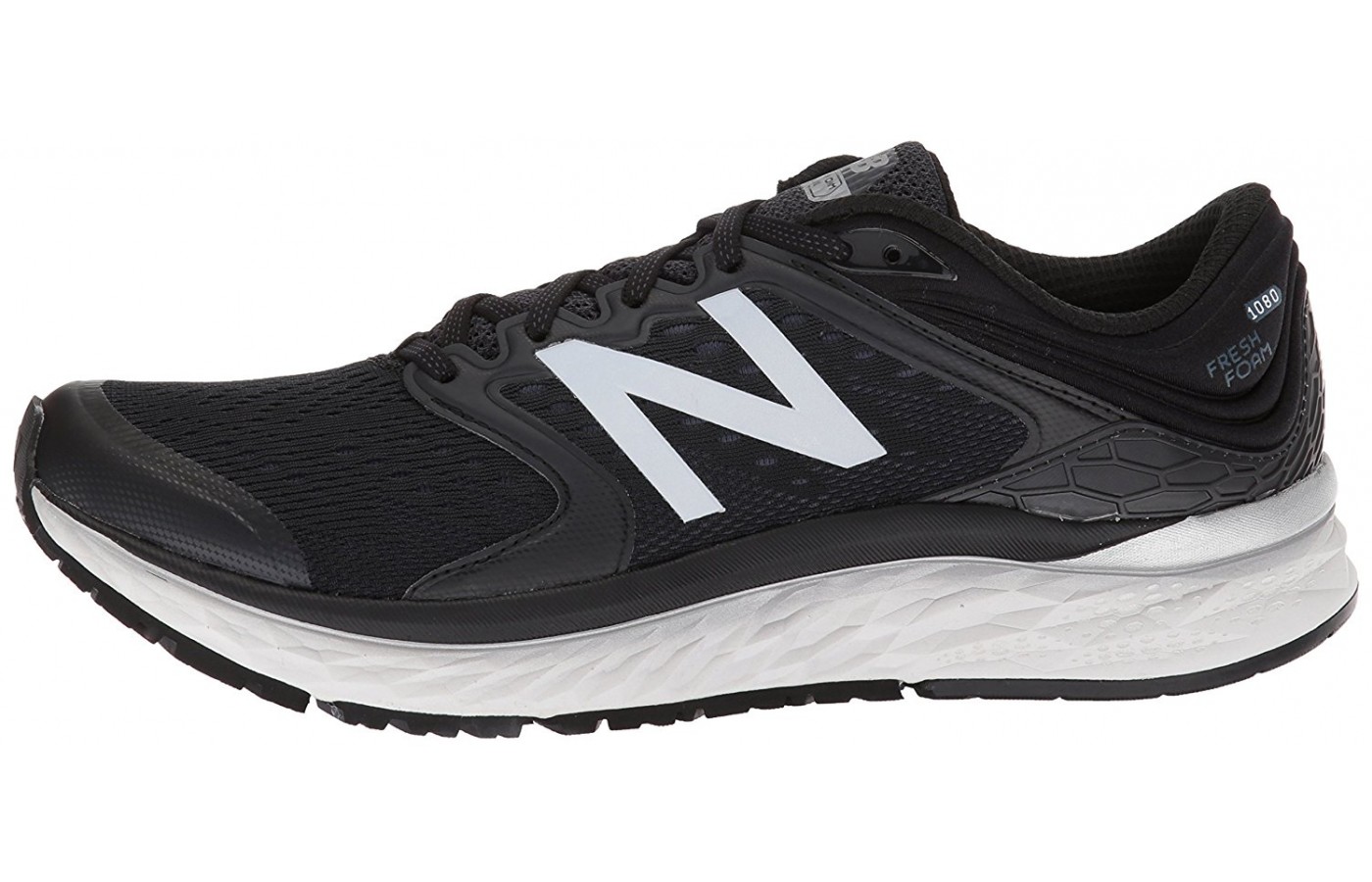 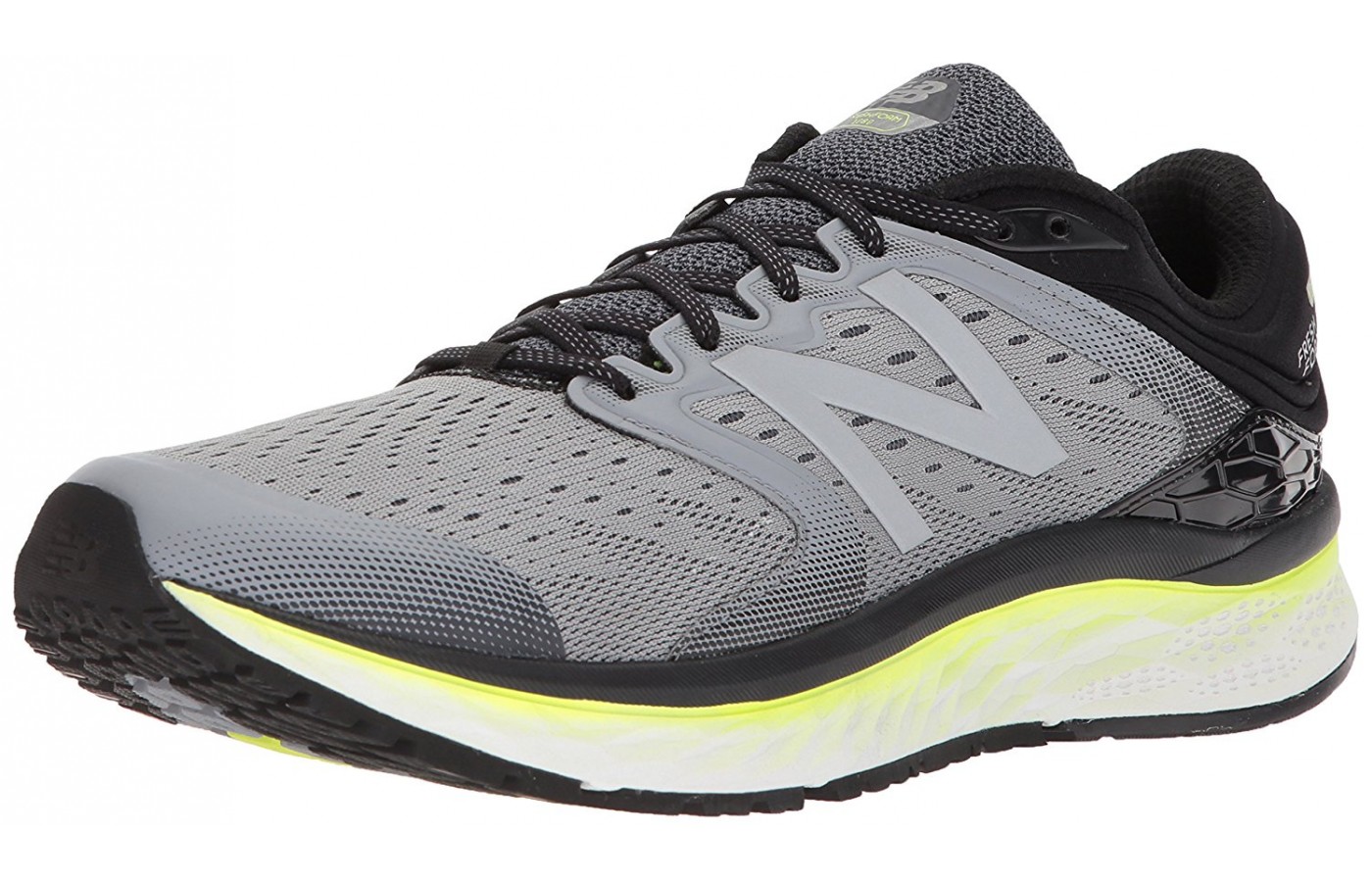 8.0
8.0 score
(WalkJogRun) score (8.0)/10
Our WalkJogRun score is based on 3 different factors: Editor's rating after in-depth testing. User ratings submitted on this page Overall score from the "reviewmeter" based on reviews across the web the weight of each factor is: 40% editor rating 15% user ratings 45% reviewmeter.
1
Editor rating: 7.0 / 10

The V8 is New balance’s attempt at creating a shoe that would provide the wearer with maximum comfort. To achieve this end, they have both included multiple new technologies and have totally revamped the aesthetic qualities. Introduced in December 2017, this design of the 1080V8 is still relatively new, which further amplifies the importance of the multiple technologies that are included inside of the shoe.

We have spent 3.0 hours analyzing a total of 385 reviews.

Positive
Read more
Negative
Read more
Reviewmeter
The Reviewmeter shows you an overall score that you can easily refer to. The highest rating is 10 (100% positive feedback)
Of the 385 reviews we found in total, 18% were negative, and 82% were positive.
8.2
1
5
10

The outsole of the V8 is unique for a running shoe to be honest; It is made out foam, and is molded to for progressively larger hexagons on the bottom. The thing about the V8 is that it has gaps in between the hexagons on the sole, which works wonders for the shoes overall continuation while running. These grooves on the sole of the V8 also aid the wearer in the range of motion that they have; For instance, there are grooves along the heel of the shoe, and near the toe box, which are useful when the shoe is worn for its initial purpose.

New balance honestly did a pretty great job with the outsole on the V8. For starters, the patterning on the outside of the midsole is amazing. It appears that they were just added for aesthetics, but they really aid the shoe in having that blended look between the outsole and midsole; A fun act about the patterning of the midsole is that it received the patterns to enhance both the firmness and comfort provision that the shoe provided. Honestly, the V8 is riddles with patterns throughout the midsole to improve certain areas of the shoes’ service. The fact that the midsole was deigned as a single block of foam rather than having those additional layers that most shoes are designed with nowadays also greatly enhances the V8’s comfort levels.

The Upper on the New balance V8 is standard to be honest. It has its fair share of reflective material, which you know, helps the wearer be seen in the dark. It is created out of a standard mesh material which is standard on a variety of shoes nowadays. Underneath the mesh, the shoe is comprised of the standard bootie that acts as a dual layer to give the shoe a bit of extra protection. New balance has also given the shoe a bit of blending of colors, probably to aid in the aesthetics category.

Weighing in at 11 oz. the 1080 V8 is a relatively heavy shoe. Tis is primarily due to the fresh foam material that they have included in the sole. This impacts the overall ride while in the shoe because, for the most part when looking for a running shoe one of the most important things be that it is lightweight. The weight factor doesn’t affect the wearers ability to perform overall while in use, but it does make a noticeable difference compared to say a Huarache or something of that nature. Not the biggest deal, but the shoe can be a made a bit lighter.

The comfort of this shoe is so subjective it’s not even funny. The fresh foam that the shoe is made with gives users a mixed feeling while worn. The foam does give a decent ride and an overall pleasurable experience but the weight that it adds on is noticeable while in use. It also makes the ride a bit uncomfortable because the wearer is aware that the shoe is there during the entire run. The foam is also rather firm which compared to the other shoes and their multiple layering that make up their midsoles, isn’t the most comfortable. The upper is relatively comfortable though, especially given the fabric that raps around the ankle; this fabric gives the shoe added padding that honestly aids the wearer when running.

Compared to previous models, this shoe has been completely upgraded in the style category. The previous models of the 1080, while they haven’t been completely hideous, are very block-y. They have combinations of layering on both the sole and the upper, that frankly doesn’t fit in with the style of popular shoes now-a-days. Given the sleek-ness of the 1080 V8, with the lack of layering on the sole; The blending of both the midsole and the outsole coupled with the hexagonal molding throughout the sole, aids this shoes’ efforts to be attractive. The V8 is also available in a variety of colorways, with each of them having a layering of colors throughout that really give them the look of a shoe that can be worn outside of the track. The upper is also partly attractive, it has the blending of coloring that fits in with the blending of the sole. Overall the slim look of the shoe and the minimalist design, really fits in with the style of shoes today.

The durability of the shoe really depends on the intended purpose. It’s not a bad shoe in terms of design because the seamless stitching and the foam make of the sole appears to be intended to last for a decent amount of time. The design of the outsole, mainly the hexagonal pattern really aids with the shoes ability to withstand the tests of time. Remember, this is mainly because of the coupling of pattern functionality with the material that the sole is made of. The upper being made from mesh shouldn’t really aid the in the durability category, but surprisingly it does. The strength of the material that acts as the secondary layer for the V8 gives it the ability to last, despite continued use.

Much like the durability of the shoe, the layering on the upper of the shoe surprisingly does offer the wearer a bit in terms of protection. The toe box on the V8 is fitted with a rubber covering that aids the shoe in giving the wearer a bit of protection regarding the upper portion of their foot. The thickness of the sole on the V8 gives the wearer the protection of the bottom of the foot that is needed while performing any extraneous activities, such as running. Also, the heel covering gives the shoe added protection in that area of the shoe; Which is a feature not often found in most low-top shoes.

The overall responsiveness of the New Balance 1080 isn’t even surprisingly good. The shoe a fresh-foam sole, which in short gives it an added bounce during a run. The sole in a way seems to snap back into place while in use. This in short aids the shoe in its reverberate capabilities; Meaning that it gives the wearer more snap during their run. Which is a bonus of the shoe because of its uses. Overall the fresh foam make of the sole gives it a decent amount of return, decent when it comes to the use of the shoe itself.

The 1080 V8 is a solid shoe. Despite the minimalist make of the upper it does provide the wearer with a decent sense of support, which in a low top shoe is hard to find. The wide base that is the sole of the V8 really gives the wearer the heel support that is needed during a long run. This coupled with the decent covering of the ankle make the V8 a solid shoe if you’re looking for one with support. Also, New Balance decided to do something different with this shoe; Instead of the solid sole that most shoes of it’s kind comes with, they have decided to use patterning throughout the base to improve different aspects of the shoe. Overall the New Balance 1080 V8 is a neutral cushioned shoe with solid support to aid in user experience.

Although the V8 has a durable outsole, it isn’t quite the best when it comes to the range of terrains that it can be worn on. The Hexagonal patterning that New Balance has used to make the base of the shoe is very versatile, but it isn’t the best on all surfaces. It performs very well on developed surfaces such as a street or a track for instance but on trails, the material leaves a bit to be desired. It’s due to the material itself and not the patterning because the hexagonal shapes interlock well enough to provide a decent grip.

The New Balance 1080 V8 will leave a decent-sized dent in your pockets. The features that come with it make the shoe well worth your money but, these are not inexpensive running shoes. It lasts long enough for you to get bang for your buck which justifies the tag that it comes with. Compared to other shoes of its class, it’s not the worst deal that one can get for a shoe.

The V8 has amazing grip due to the patterning and the material that the sole is made of. The Hexagonal patterning, while it may not be the best for undeveloped areas, do their job when it comes to biting surfaces ad making sure that users don’t misstep while wearing them. Overall the sole does a great job of delivering a decent traction-full experience.

New Balance did a great job in ensuring that they'd made a shoe that did it’s job, and did it well. The V8’s sole was made with grooves in between the hexagons on the base. These aid in the shoes ability to bend while in use and give the wearer an easier shift from heel-to-toe while in use. The interesting part about the grooves in between the patterning is that they added one on the innermost part of the heel. This does a great job in giving the wearer a bit of range of motion in the heel of the shoe, something that can seldom be found in shoes of the V8’s caliber. Also, the mesh upper is flexible enough to allow the shoe to conform to the foot; meaning that the fabric bends to the will of the user’s foot giving added range of motion.

The heel-to-toe drop on the New Balance 1080 V8 is about 8mm. This is relatively good because of it gives the wearer more ease of transition during use. The midrange drop on the 1080 V8 adds to the support that the shoe gives.

The New Balance 1080 V8 is a great shoe. Besides the decent weight that’s on the shoe, not much else bad can be said about it. It’s made from decent materials, it gives nice amounts of traction, and is appealing to the eye. On top of that it’s comfortable too meaning that it’s a decent shoe to wear outside of the track. 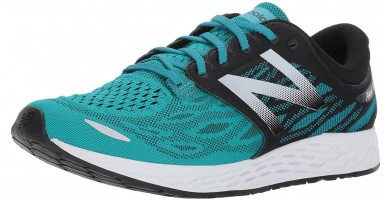 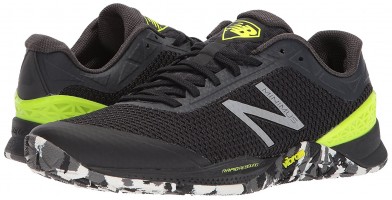 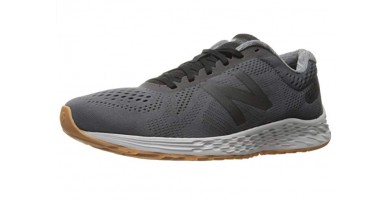