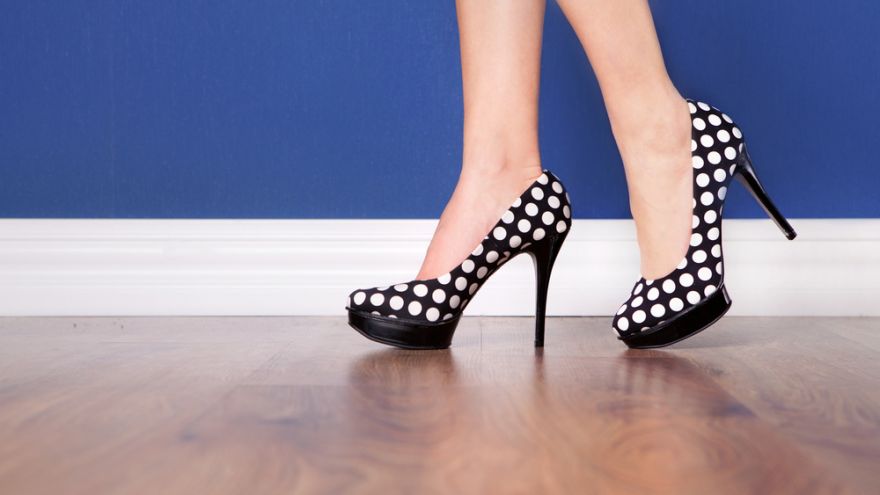 At first glance, it might not be readily obvious why women (and some men) would subject themselves to the discomfort of squeezing their feet into high heels. Heels look cool and fashionable but obviously are not that comfortable, and over long-term use can actually damage your feet.

So, why then do high heels persist today and continue to be worn daily by millions of people? In the following, we’ll dig into this question moving past the obvious “everyone has subjective reasons for doing what they do” and trying to make some sense of this phenomena.

If you look back into the history books the first documented use of the high heel was credited to Queen Elizabeth I of England. Yes, the same virgin queen destroyed the Spanish Armada in 1588.

So, when you go all the way back to the origin of heels you’ll find that they came from a place of power and prestige. Through the intervening years, their usage shape shifted and changed a bit. But one fundamental thing remained true. High heels are about power, femininity, and an air of elegance.

Fast forward to today and heels symbolize feminine sexuality and power. Or, perhaps more specifically: power via sexuality. Attitudes have changed a lot but it seems that the mystique of the heel remains in place. And despite the pain they can cause they remain widely used.

People tend to downplay the effect evolution has on our modern society. In terms of heels, the theory runs like this: Wearing high heels likely makes a woman more attractive, allowing them to be more selective over a larger number of higher quality mates. From an evolutionary perspective, this makes perfect sense and is nothing more than another strategy to maximize reproductive success.

Men and women tend to walk differently and high heels may help exaggerate the particularly feminine aspects of gait. Picture a woman walking in heels, is she swaggering around or nimbly and carefully picking her steps. Think about it for a minute and it’s not hard to understand how heels help a woman play up her femininity.

This is again focusing on a reason from the perspective of reproductive success. If someone is concerned with attracting potential partners they will want to do things that make them more appealing. By wearing heels and creating an optical illusion of longer legs women can emulate 6 ft models. Some people claim heels make you look slimmer. They can increase sex appeal and channel 500 years of allure that has been ingrained in human psychology.

Women are socially obligated to

Feminists will likely object to many of the explanations for why women wear heels as they discount women’s lack of choice in many situations past (and still current). There is plenty of evidence to suggest that women will be treated differently who dress a certain way vs those who don’t. In many cultures breaking from cultural norms is taboo and not well received. To give an example: numerous stories can be found online from women who were treated negatively for wanting to wear flats instead of heels — a bride was told she was not “taking her wedding seriously enough” and “would not really look like a woman”. A job placement advisor informed female students that flats were not recommended for interviews.

Women are conditioned to

This is similar to bullet point number four. Through social reinforcement and other types of conditioning, pop culture, etc girls grow up knowing what power heels have and how they are associated with being sexy, powerful, beautiful, feminine, etc. Peer pressure exerts a lot of conscious and subconscious pressure on people. If a woman is within a social group where most wear heels she is far more likely to follow suite. This is human nature and not a gender specific trait. Humans like to fit it and seem to have a degree of conformity built into our DNA.

After all these points about evolution, looking sexy and being obligated to — here is a slightly more positive reason women wear heels. It can make you feel more confident. If you’re shorter throwing on a pair of stilettos can make you feel a bit more commanding and if you’re concerned about looking too plain a pair of flashy heels can make a big difference. Some of this is due to the fact a woman is probably more likely to get male attention in heels than not, but a good part of this can just be down to feeling good as you are. As superficial as it may sound our clothing and footwear does have an impact on how we feel about ourselves. Ask any person to wear shoes they feel uncomfortable in for a day and then tell me that isn’t true. Heels can provide a spark and a boost to assertiveness and confidence.

Wearing heels force a closer attention be paid to balance and body mechanics. It’s because of this that heels can actually end up having the net positive effect of improving posture. It’s unlikely that many women wear them for this reason alone but it’s worth throwing into the mix nonetheless.

So, there you have it — our stab at explaining why women wear high heels. Are we right? Are we way off base? Feel free to let us know in the comments. And if this topic has sparked your interest PsychologyToday has written a great, in-depth piece on the same question, it can be found by clicking here. Thanks for reading.

It would be hard to imagine anyone putting up with squeaky shoes for too long. You might try ignoring it, hoping it would...
29 Mar 2021
93771
Categories
Sign up