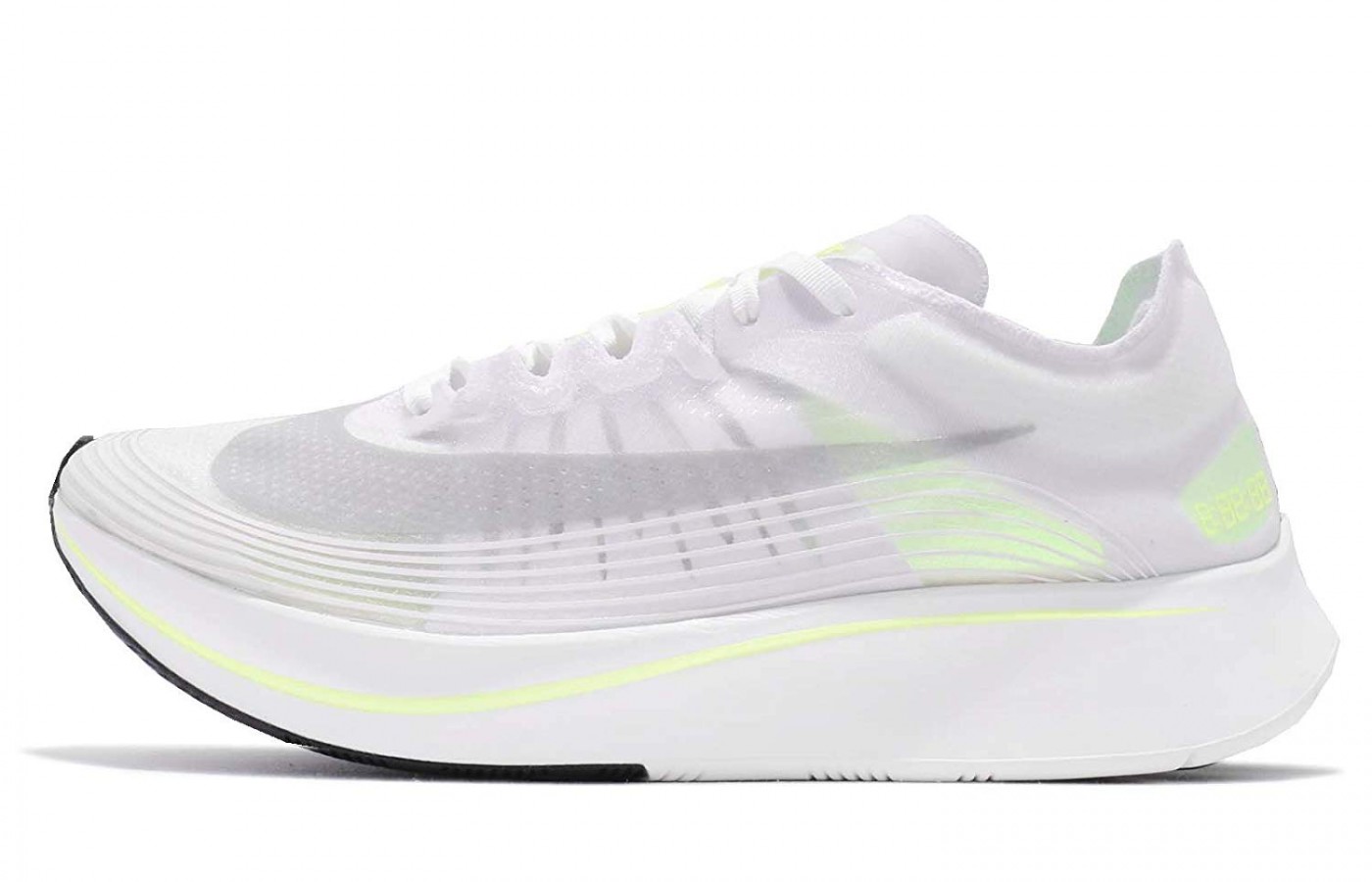 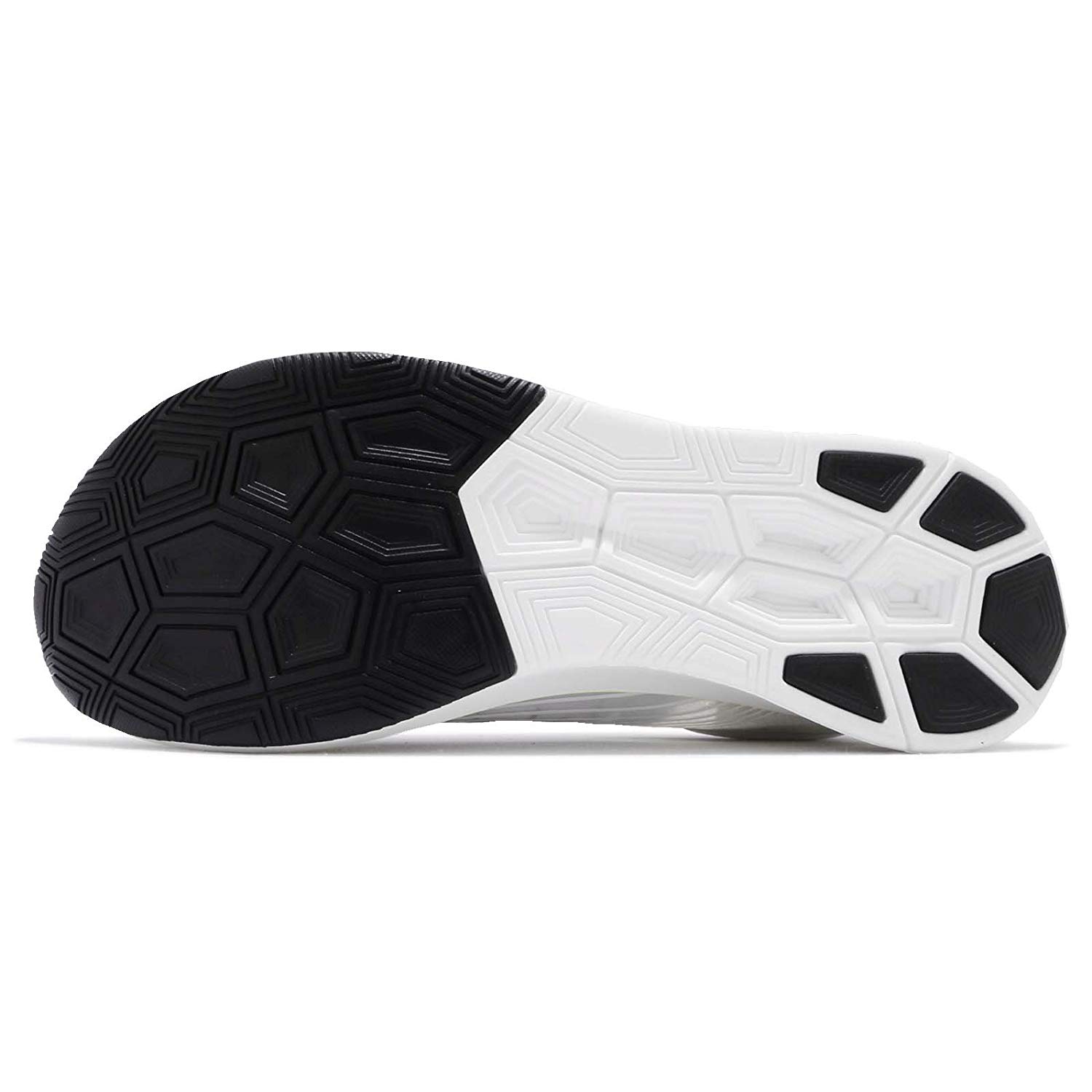 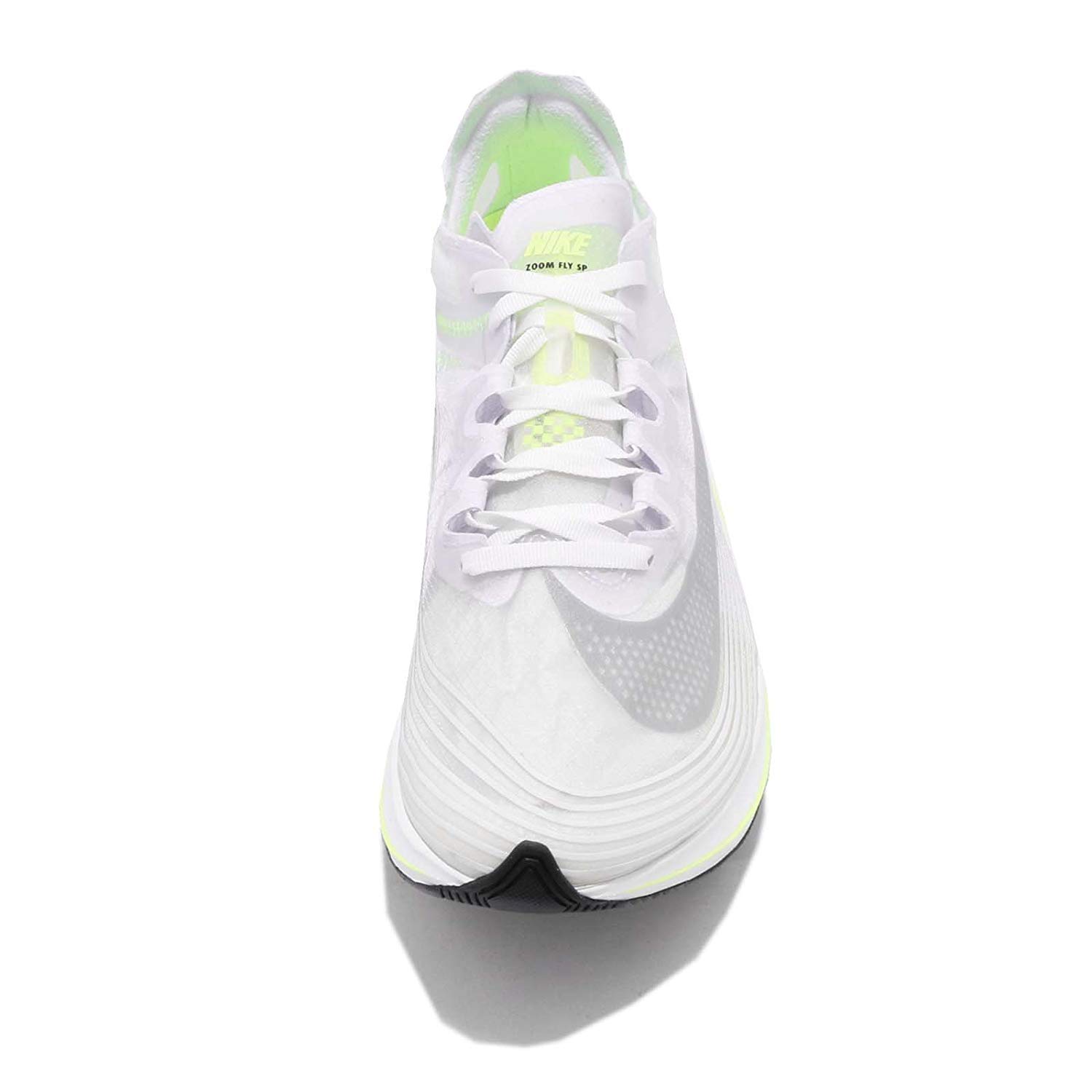 If you’re looking for a comfortable, lightweight running shoe, the Nike Zoom Fly SP is probably the one for you. These shoes closely resemble the Nike Zoom Fly but, as is normal with the Nike, has a few different upgrades. These shoes are made for those individuals who would like to go fast; there’s really nothing else that one can say about it. The original idea for the Zoom Fly SP came about when Nike tried to beat a marathon record, and they came pretty dang close.

Just taking a look at the Nike Zoom Fly SP you can tell that it’s meant to be worn for racing. The outsole on the SP is made from a very, very thin layer of rubber. To give the wearer a bit more grip that can be used during takeoff on a track, Nike gave the shoe a full-leather forefoot. This works wonders for giving one that extra push that they need in order to really enjoy the shoe’s experience. The outsole is ergonomically designed to rest-inline with the curve of the foot; this is also something that the rest of the shoe’s sole unit does but, as one gets to the outsole it becomes a bit more noticeable.

Unlike the design of the Nike Vapor-Fly (the shoe that this one was modeled after), the midsole on the Nike Zoom Fly SP is designed from a standard Lunarlon foam. The use of the Lunarlon foam gives the Zoom Fly that extra little push in regards to cushioning that they may need in order to run those extra-long races. Much like the design of the Vapor Fly, the midsole on the Zoom Fly has a full-length plate infused into the design. However, while the plate in the Vapor Fly was made entirely of carbon fiber and gave wearers that extra little bounce that they may need, the midsole of the SP has only a carbon fiber infused midsole. This difference in plating doesn’t make much of a difference in energy-returning capabilities as the 2 shoes are both very proficient at doing so.

The upper holds several treats, to say the least. The upper on the Nike Zoom Fly SP for starters are made from a diamond-woven, mesh. Because of the fact that these shoes do have to be somewhat minimal in order for one to pick up the speed that they’d need while worn, the diamond-weaving was a great choice; it allows the material to roll over the foot ad to be very breathable. The shoe also has several graphics in place on both the heel and along the sides of the shoe. Many of these graphics have to do with racing such as the stopwatch along with the heel of the shoe. The lacing isn’t the standard Nike lacing either; this shoe is designed with lacing goes through the walls of the shoe itself; this allows the shoe to give one that extra-snug fit that they’d most likely enjoy from any shoe. The side walls of the Zoom Fly SP are also semi-translucent, which is how one would be able to tell that the lacing goes all of the ways through the sides of the shoe.

This is definitely not one of those racers that one would feel during a run of any kind. For starters, the SP weighs about 8.4 oz total; that’s very good for a shoe with a plate incorporated into it’s sole unit. The low weight of the Zoom Fly SP is one of the contributing factors to the shoe’s overall functionality; for the shoe to be able to beat a record that requires efficient running speeds and form, it would have to have a design that allowed it’s wearers to make the best use of their energy.

The diamond-woven mesh upper is definitely breathable, to say the least. Much like traditional mesh, the fabric is relatively thin and doesn’t work to stop any airflow from flowing to and from the design of the shoe. The thin side-walls on the Zoom Fly SP also greatly enhance the breathability of the shoe itself. The side walls and their translucent design do a great job of giving wearers all of the circulations that they’d need during their run; believe it or not, this is one of the huge difference makers in a shoe’s ability to really provide the wearer with any sort of functionality for a great length of time.

The heel of the upper is slightly cushioned which reduces the chances for chafing and overall discomfort to occur while the shoe is on foot. In addition to this, both the shoe’s lightweight design and thin nature ensure that wearers have a comfortable experience while in use. Keep in mind that the mesh upper doesn’t have much elasticity which means that a slight miscalculation in one’s size can result in ample levels of discomfort (at least until you get the right size). The Lunarlon foam midsole also gives that cushioning feel any individual would like from their shoe and works to make the shoe much more comfortable than various other racers of it’s kind.

Believe it or not, the Zoom Fly SP is actually a very impressively fly running shoe. Much like the Vapor Fly, it has a thin cut that can be used for wear in both casual and athletic environments. Although it’s not a collab in the slightest, aesthetically it does give off the vibe of being a collab. The first thing that you notice when you get the shoe’s box are all of the bells and whistles that it comes with. Another thing that gives it this high-end vibe are the graphics on the heel and sides of the shoe; it isn’t very often that you receive a shoe with all of the higher-quality materials that this shoe has.

When it comes to durability, this shoe was definitely made to last. The upper of the Zoom Fly SP, while being thin, is able to handle quite a bit of wear; this is one of the benefits of the diamond-weaving of the mesh in this part of the shoe. Another thing that pertains to durability and goes unnoticed quite often is the cushioning. When I say “cushioning” I refer to the midsole of the shoe and its ability to provide a high level of both comfort for a relatively long length of time; a long-lasting cushioning such as this is very hard to come by and should be respected.

The carbon-infused plating in the midsole of the Zoom Fly SP acts as a great barrier that protects the underfoot from any type of damage. Being that this is a traditional racing shoe, it won’t be able to provide a level of protection that one would likely seek in a design of a different type; but it does have things such as the platin in the midsole that keep the foot protected during a run. The plating also keeps the foot stable during a run at higher speeds; something that will likely be beneficial as time goes on and the shoe is being worn for longer durations.

Wearers (and Nike themselves) claim that the energy return felt by this shoe is almost unreal. One of the saving graces of Lunarlon foam is that it has the ability to give wearers a higher than average level of bounce during a run. This “bounce” is only enhanced by the stiffness received by that plating placed in the midsole of the shoe. The midsole plating allows the shoe to “snap” back upwards when in use, immediately delivering the wearer a responsive feel. The forefoot of the outsole is also covered in a layer of rubber that allows for amazing takeoffs while worn. If this shoe isn’t responsive, I don’t know what is.

For a foam as lightweight as Lunarlon, it’s a bit surprising for it to provide the underfoot support that it does. The natural cushioning abilities of the foam coupled with the plate in the midsole of the shoe, caress the various curves of the underfoot. Also, to make sure that the foam didn’t lose it’s cushioning abilities Nike made sure to add ample levels of it into the design; this is one shoe that definitely won’t cause cramps to the underfoot when in worn, that’s for sure.

This shoe is a racing/marathon shoe; it can be used on several different types of terrains. From roads to gyms, this shoe will definitely be able to handle whatever you throw at it(within reason). The lightweight materials that this shoe uses shouldn’t be used on terrains with a high level of technicalities though; it won’t be able to last long enough for one to get their full amount of wear from the shoe.

Here’s the point in the review where I have to come clean, these aren’t the cheapest shoes in the world. The materials used in the design, as well as functionality present definitely suggested to Nike that they should probably charge a bit more for this shoe; and that’s what they did. The price that this shoe can be found for would definitely scare off most individuals simply for the fact that they most likely wouldn’t need a shoe with all of the bells and whistles that this one has. With that being said, this shoe’s price is definitely warranted; you’ll definitely enjoy all of the technologies and functionality that it allows for one to have.

The full rubber forefoot of the Zoom Fly SP gives wearers that extra grip that they’d need for takeoff in the shoe; this is extremely important. Due to the forward motion that one is likely to partake in while wearing this shoe, the use of the full-rubber forefoot design was an excellent choice. It enables wearers to have faster and more liquid take-offs while in use.

While the material in the upper of the shoe isn’t the stretchiest, it definitely rolls along with the movement of the wearer’s foot. With that being said, the plating in the sole unit of the Zoom Fly SP doesn’t really allow the shoe to bend very easily. The lack of bending caused by the plate in the midsole doesn’t really affect the experience of the shoe overall simply because of the overall forward-motion enabling design that it has.

The lack of stretch in the upper also introduces something else to the design of the Zoom Fly SP, stability. If purchased in the correct size, the lack of movement introduced into the design of this shoe allows it to provide wearers with what they need regarding stability and security. In addition to this, the plating in the midsole and the stiffness that it has increases the level of stability provided by this shoe.

When one thinks of a racer, they typically don’t consider the idea that the drop may be a bit on the higher side. The drop on the Zoom Fly SP is definitely a bit higher than average (10 mm) for the simple fact that it allows wearers to enjoy a decent transitions as well as feel comfortable while doing so.

The design of the Nike Zoom Fly SP is one that is meant to provide wearers with all that they’d need in terms of comfort and stability. This shoe is great for those who need a lighter feeling shoe that can enable you to go that extra mile while being worn. With all of the technologies found in the design of this shoe, it’s no wonder why Nike felt that it should sell for the price that it does; they have to.