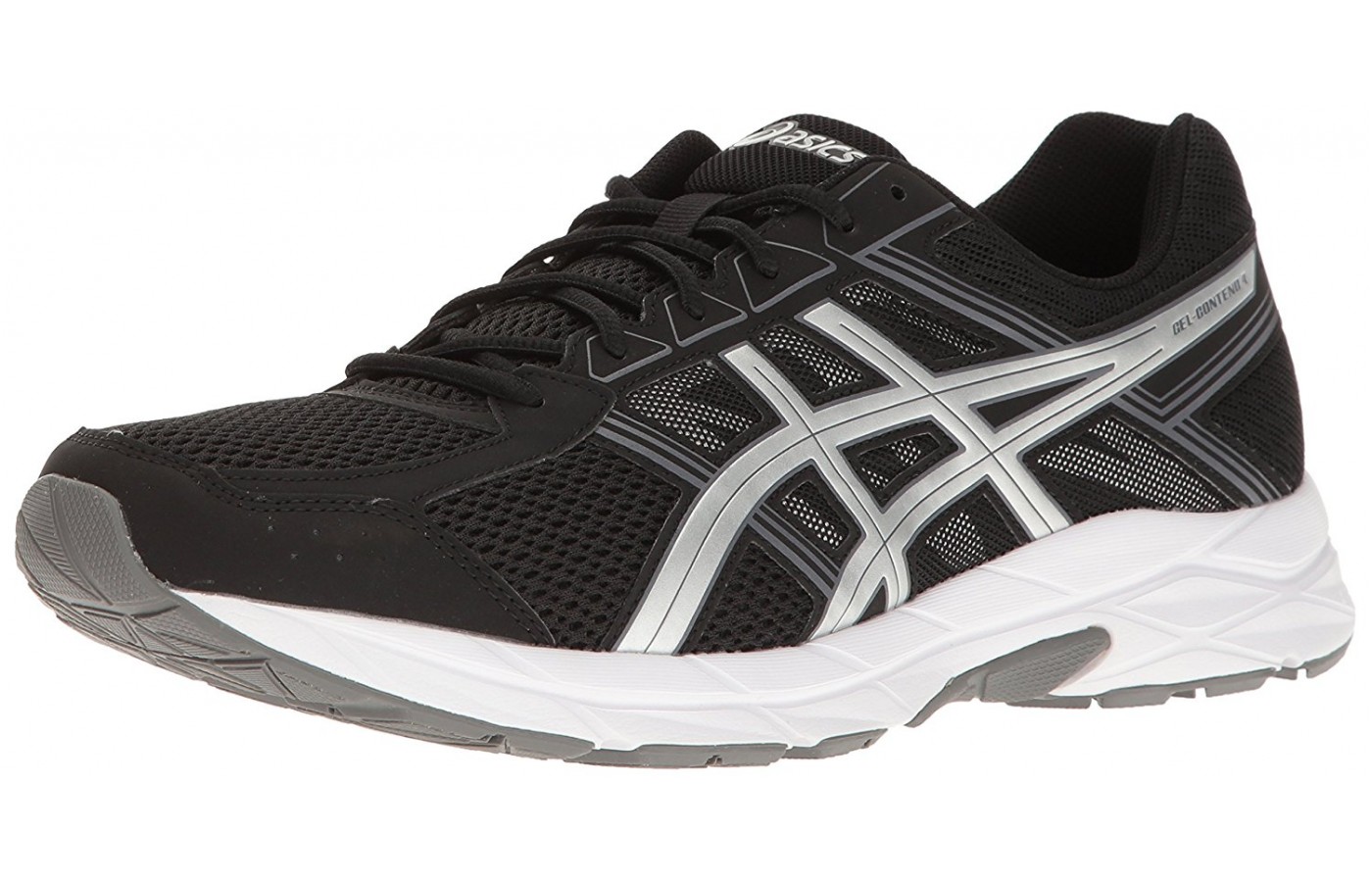 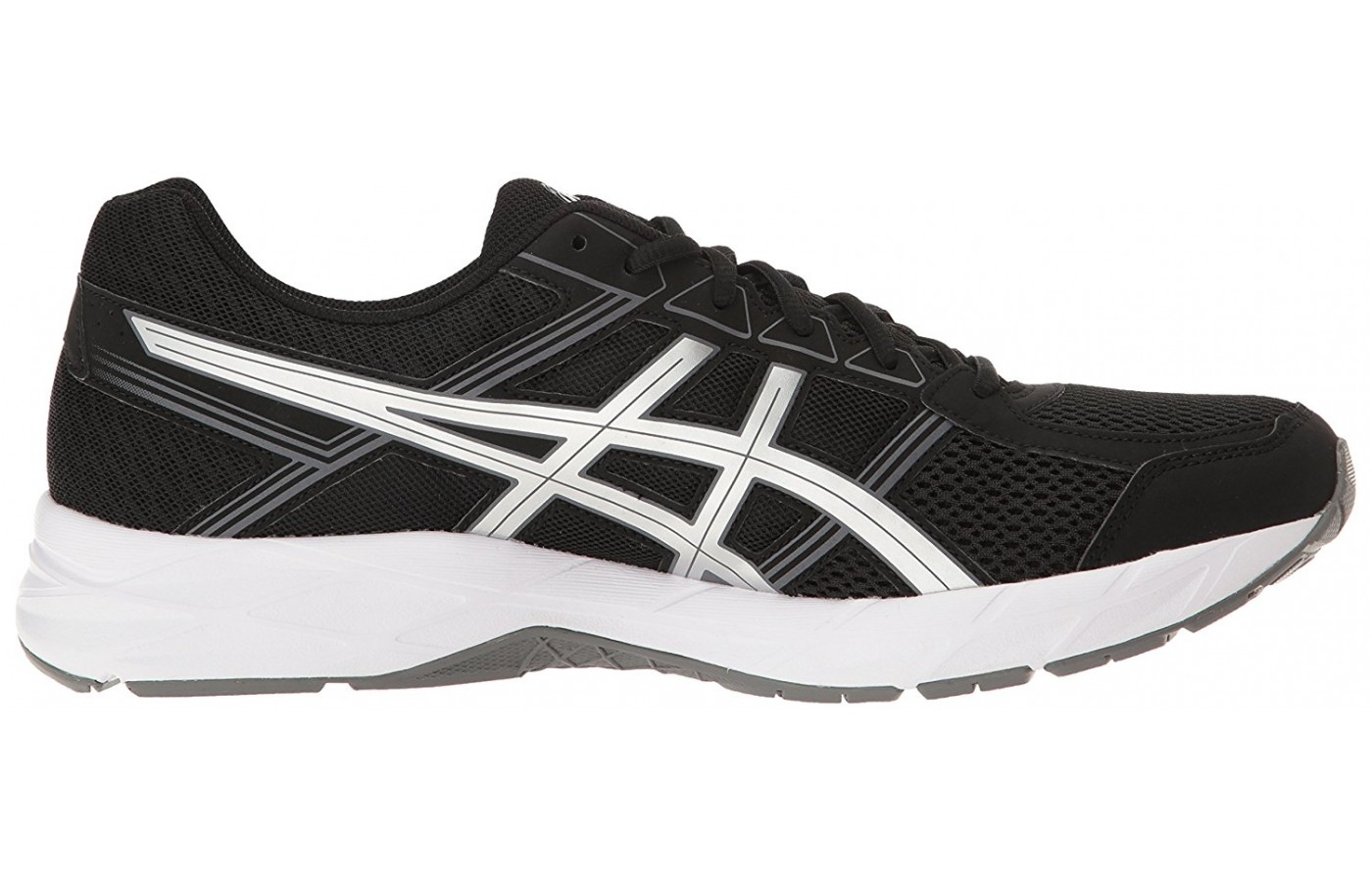 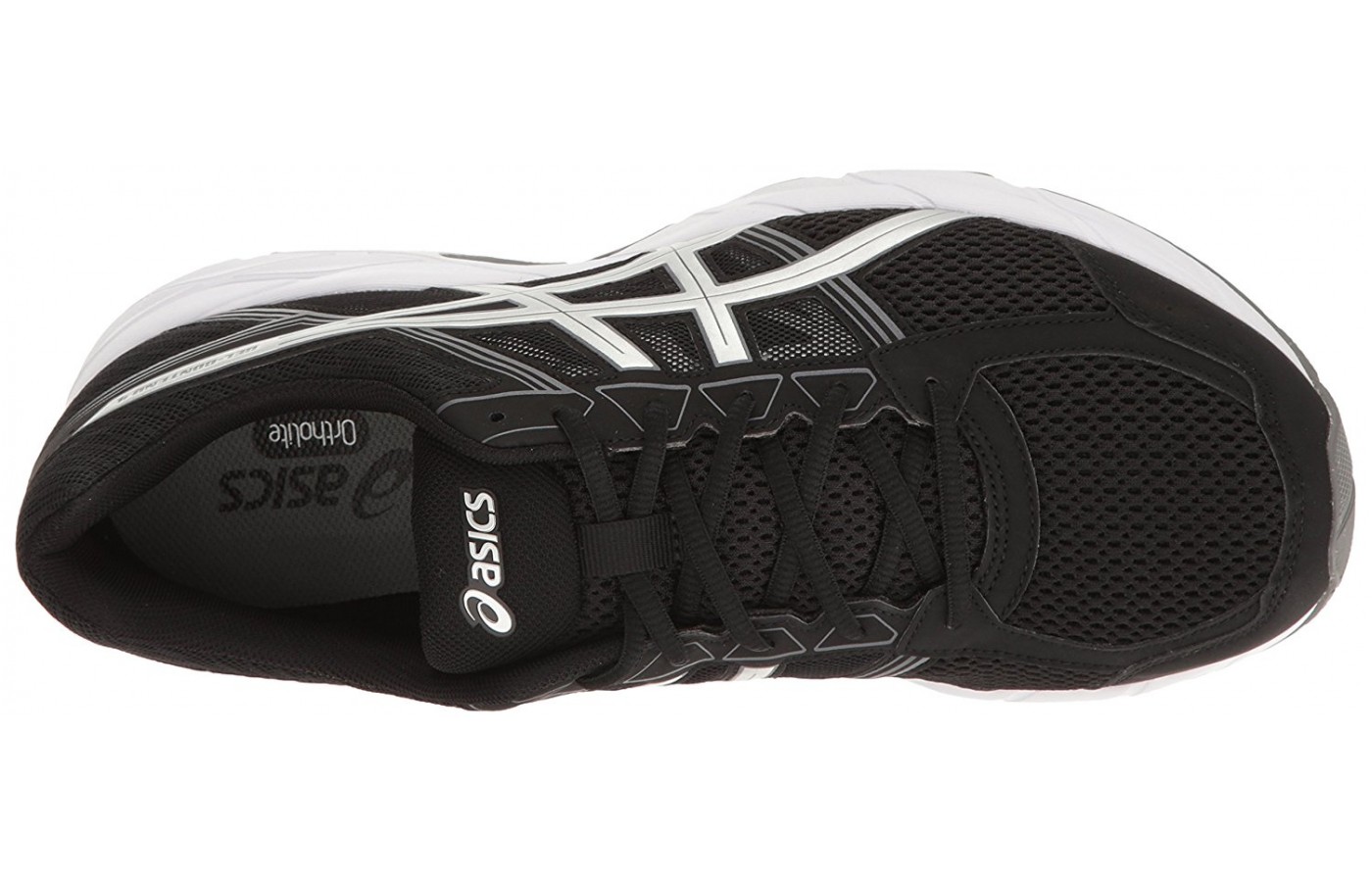 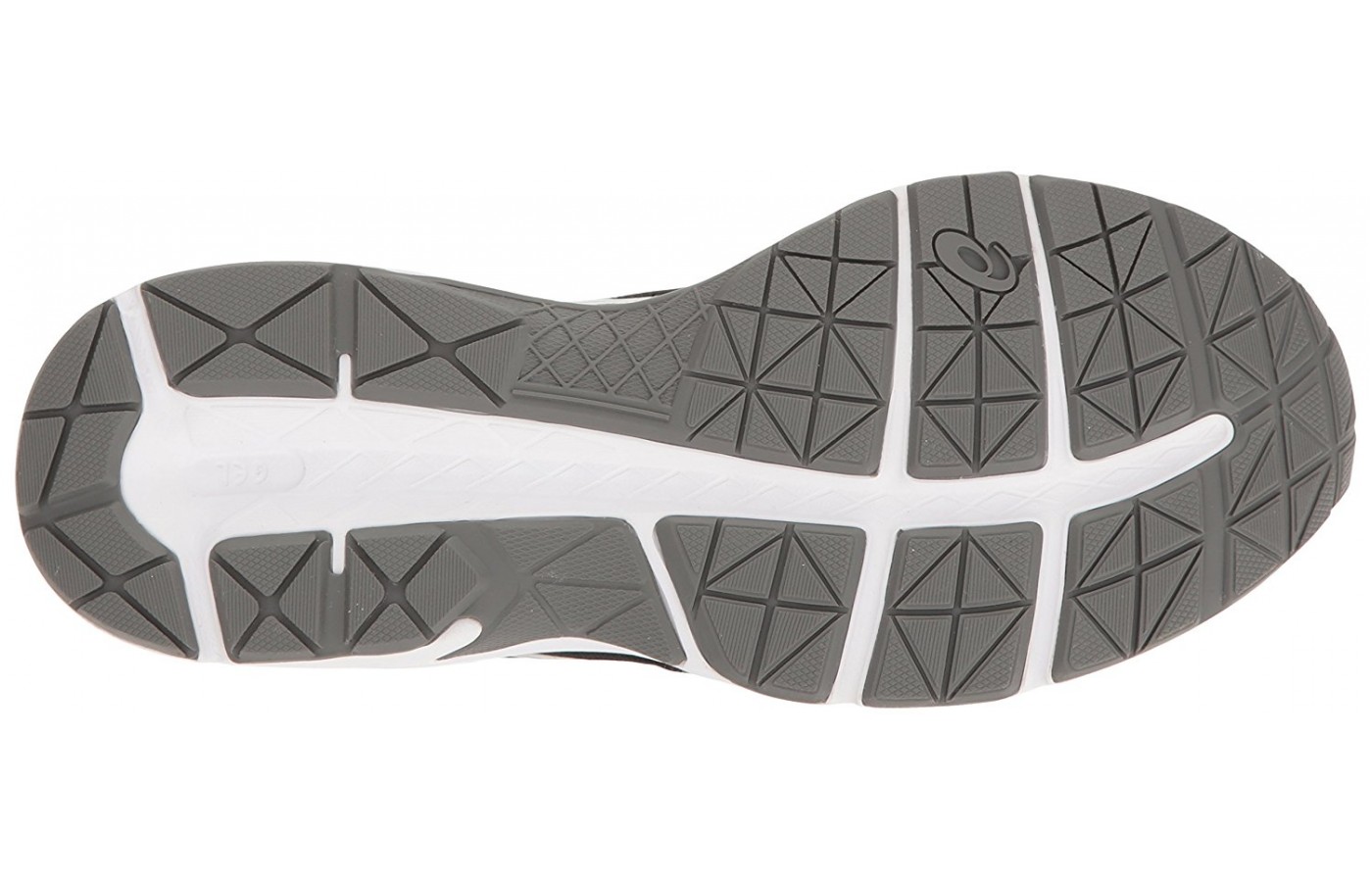 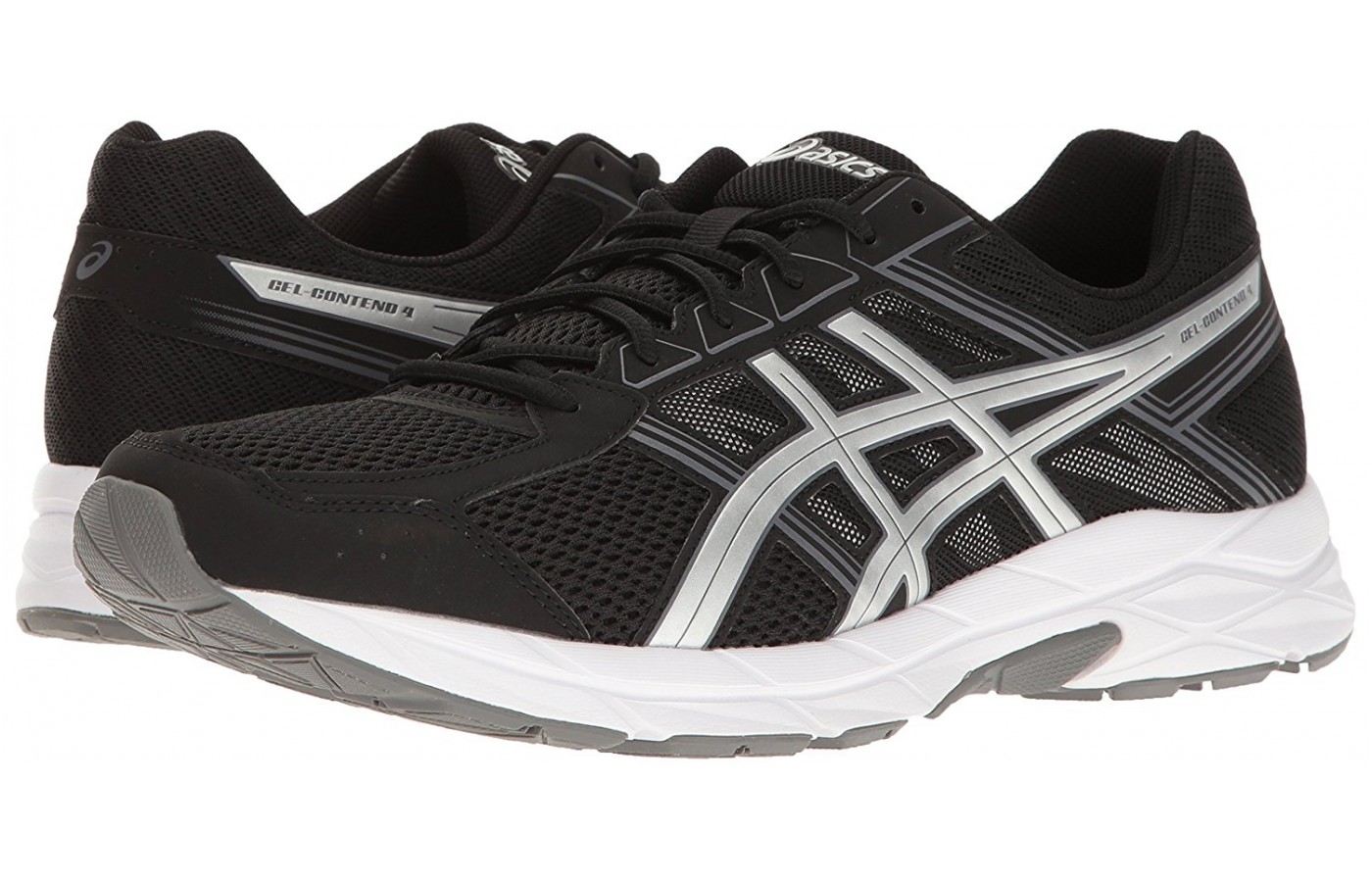 A shoe that has ample cushioning for all parts of the foot, the Gel Contend 3 merely is where it’s at. This shoe is the third iteration of the Contend series and thus, has several improvements over the previous models; of these improvements, the most important is the improved cushioning found throughout both the upper and most importantly the sole unit. Aside from that, the shoe also appears to have lost a little bit of weight, showing even further the improvement that it is over the previous models of the shoe.

The outsole of this shoe is one that is designed primarily from hardened rubber, which is usual for shoes such as this. The fascinating thing about the outsole of this shoe is that it incorporates many of the elements that allow a well-functioning shoe to provide natural transitions and a wholly improved range of motion during use; to work to the effect of achieving the range of motion, the shoe has what wearer’s would like to call flex grooves in the forefoot as well. The outsole is textured as well so that the wearer can achieve what many would like to call “advanced grip”; basically meaning that the wearer is able to really stick to whatever surface that they are running on with little to no issues at all.

The midsole on the Contend makes use of the standard EVA foam and works to give the wearer a responsive and cushioned feel while the shoe is in use. The midsole and the EVA foam that is used throughout really gives the wearer that “bounce” that they’d need and improves the feel of the shoe as a whole. To give the shoe a bit of added flair, the midsole also features Asics unique Gel cushioning system; this basically allows the shoe to provide the wearer with a bit of comfort that wouldn’t present if the shoe had received a different design. Another purpose of the Gel cushioning system is that it allows the wearer to achieve what one would like to call heel support; it really protects the wearer’s heel and reduces the possible fatigue that one will experience.

Regarding weight, these shoes can’t be considered anything along the lines of light. The weight of the Contend is a bit more than the average only because the materials that were added so that the wearer could have a bit more cushioning while in use. To get this shoe in a men’s size 11, one would receive a pair of shoes that weighs roughly 10.5 oz. This isn’t the heaviest that we’ve seen on a running shoe, especially considering that there are shoe models on the market nowadays that can weigh a whopping 13-15 oz for the same size. The thing about the weight of this shoe is that it still manages to give the wearer a bit of comfort and cushioning while in use.

Well, since the shoe is designed from mesh one of the things that becomes relatively simple to discern is whether or not it will be able to provide the wearer with what they need in terms of airflow; a question wasn’t really answered there so, in short, yes, yes the shoe does provide a bit of circulation for the wearer. The mesh ensures that the temperature inside of the shoe stays adequately regulated and that the wearer has what they would need concerning comfort as well. The liner inside of the shoe backs up the satisfaction achieved by the mesh’s breathability and provides the wearer with what they’d need to wick the moisture away from the inside of the shoe; this may not seem like anything significant but, it does allow for a higher than average level of breathability to be achieved by the shoe.

Well, all of the features up until now simply scream comfort. The upper, the fantastic upper of the Contend has both a mesh design and features the sock-liner on the inside; the sock-liner allows the shoe to really give the wearer what they’d need in order to enjoy the experience of being in the shoe without all of the moisture build up that comes with it. Much like the sock-liner in the upper of the shoe, the mesh portion allows the wearer’s feet to move freely and openly responds to the needs of the foot while the shoe is in use. One of the things that is simply praised by this shoe is the fact that the sole unit of the shoe has so much cushioning in place throughout the EVA midsole, especially in the heel, has ample cushioning in place which can be used to give the wearer all that they’d need to forget the fatigue and keep pushing during a run.

The cut of the Contend is one that does nothing but remains on the athletic side of things. The shoe has the various overlays that signal that it’s meant to be used for running and that it probably won’t be the most fashionable choice of the shoe if worn casually. The shoe gives the wearer a bit of variety due to the fact that it comes in a variety of colorways. With that, in mind, the variety that the colorways allow is the only thing that really gives the wearer any sort of choice with this shoe. Keep in mind though that the Contend is meant to be used as a running shoe(something that it does a very good job of doing); anything aside from that is purely subjective and, with this shoe, doesn’t really matter much. If you are looking for a fashionable shoe, the Contend is definitely not for you.

The Contend has been praised for it’s longevity for quite a while. For starters, the rubber in the outsole works to give the wearer all that they would need in order to enjoy a shoe that will last for a decent length of time; this goes primarily for the outsole of the shoe, the upper is a whole other story. The upper of the shoe and those beautiful overlays, also lasts for a decent length of time; as well as the midsole and the EVA that it is designed from; keep in mind that EVA has a habit of compressing and staying compressed after a while, don’t be surprised if this happens to your pair.

The synthetic overlays that are incorporated into the design of the upper of this shoe, works to give the wearer what they’d need in order to really enjoy the functionality of this shoe without opening them up to the level of damage that would be possible if they weren’t present. Another great thing about the design of these shoes is that they make great use of the reflective materials that are present; the reflective materials somewhat ensure the wearer’s safety when they are using the shoe for activities such as running at night or dimly lit areas. The sole unit of the shoe is rather thick and works to keep materials from entering the shoe than in use (not to mention that a side effect of using EVA is that the wearer receives a decent level of shock absorption when in use).

Keep in mind that this is a neutral running shoe, the features incorporated provide support but, due to the fact that it’s meant to be neutral, doesn’t do so for all runners. The midsole of the shoe has the cushioning that the runner would need in order to really enjoy the experience of this shoe; the EVA foam’s natural ability to conform to the shape of the wearer’s foot and allows the shoe to give the wearer a bit of support while the shoe is in use. The material in the upper of the shoe gives the wearer a bit of support for the sides of their feet.

Well, the sole of the shoe signifies that the wearer is able to fully function on terrains such as roads and indoor surfaces. The sole unit of the shoe doesn’t have any of the lugs nor does the upper have the excess layering that would make this an effective shoe to use on terrains such as trails. The good thing about this shoe is that, although it can’t really be used on trails, it’s current design does allow it to effectively be used on roads; the reflective materials makes it fully equipped to provide the wearer with what they’d need in order to run on a road.

The best thing about the shoe is the price. The Asics Contend can literally be found for a price that makes it something that won’t really give the wearer any level of issues; the price is something that literally allows the wearer to buy multiple pairs or replacement after replacement without breaking a sweat. Now here’s the literal kicker; although the shoe is inexpensive, it doesn’t come with features that require the wearer to constantly get replacements. It’s durable.

When it comes to traction, the sole unit of the Contend is designed to literally give the wearer everything that they need in full; it’s made from a rubber material that sticks to the surface and allows the wearer to gain what they’d need in order to fully enjoy the user experience. The shoe features a multi-directional pattern throughout that allows the shoe to really give the wearer what they’d need in order to function in even wet weather conditions. The grip achieved by this shoe has fallen somewhat from that achieved by the previous models of the shoe though.

In terms of flexibility, the sole unit of the shoe definitely works to give the wearer what they’d need in order to really move. The sole unit features flex grooves in both the forefoot and the heel which allows the shoe to move to the movements of the foot and keep the wearer experiencing smooth transitions. The upper of the shoe is still designed from a mesh material which allows it to really move to the will of the wearer’s foot.

The upper of the shoe and the use of the overlays, allows this shoe to provide the wearer with what they’d need in terms of stability. The sole unit of the shoe also allows the wearer to move with a precision due to the use of a guidance line separation in the outsole.

The heel-to-drop ratio in the sole unit of the shoe is about 10mm; this allows the shoe to really provide the wearer with what they’d need in terms of transitions and the quality of them.

The design of this shoe is something that is, for lack of a better word, pretty standard. It really provides the wearer with everything that they’d need in order to really function in their respective terrain but, does nothing much after doing so. The good thing about the design of this shoe is that it provides the wearer with what it needs to but still does so while being inexpensive. 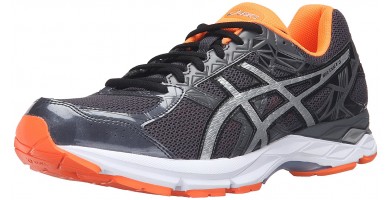 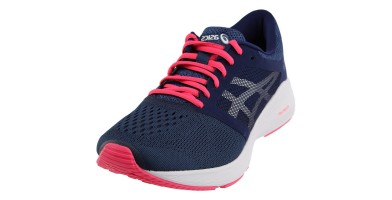 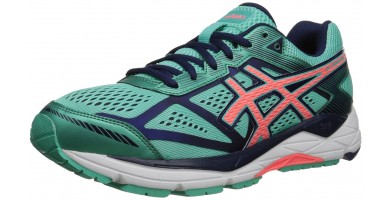