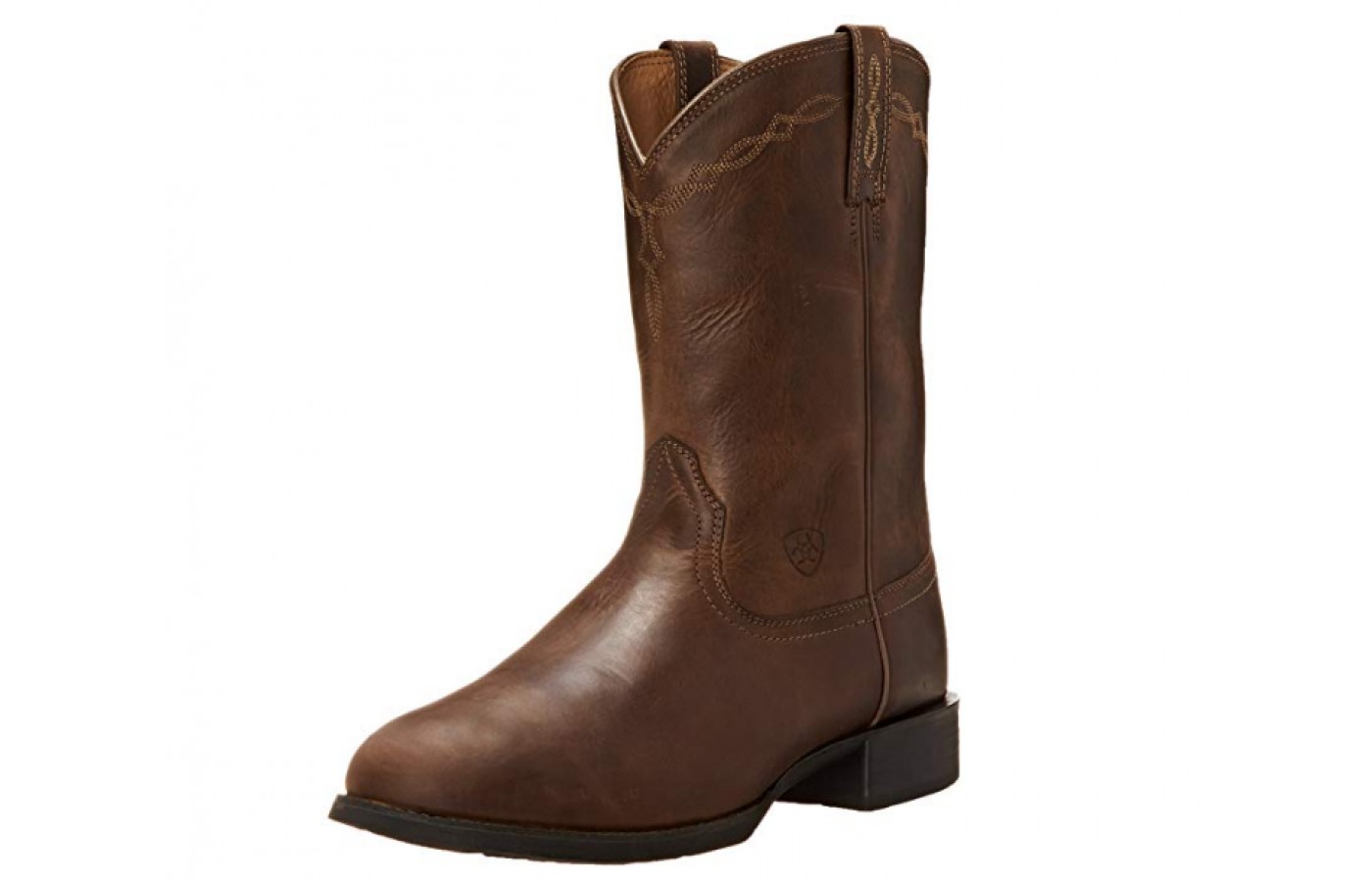 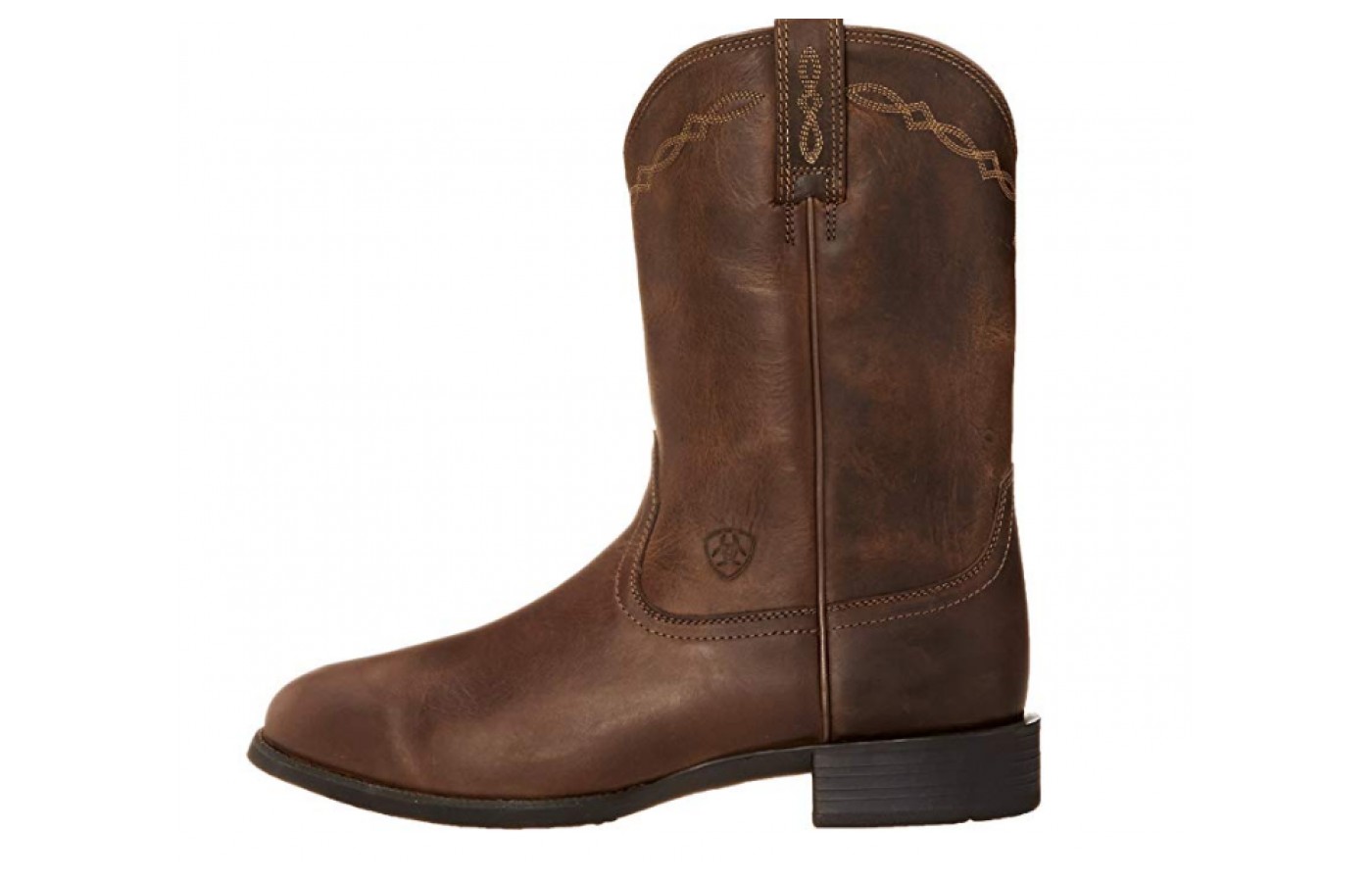 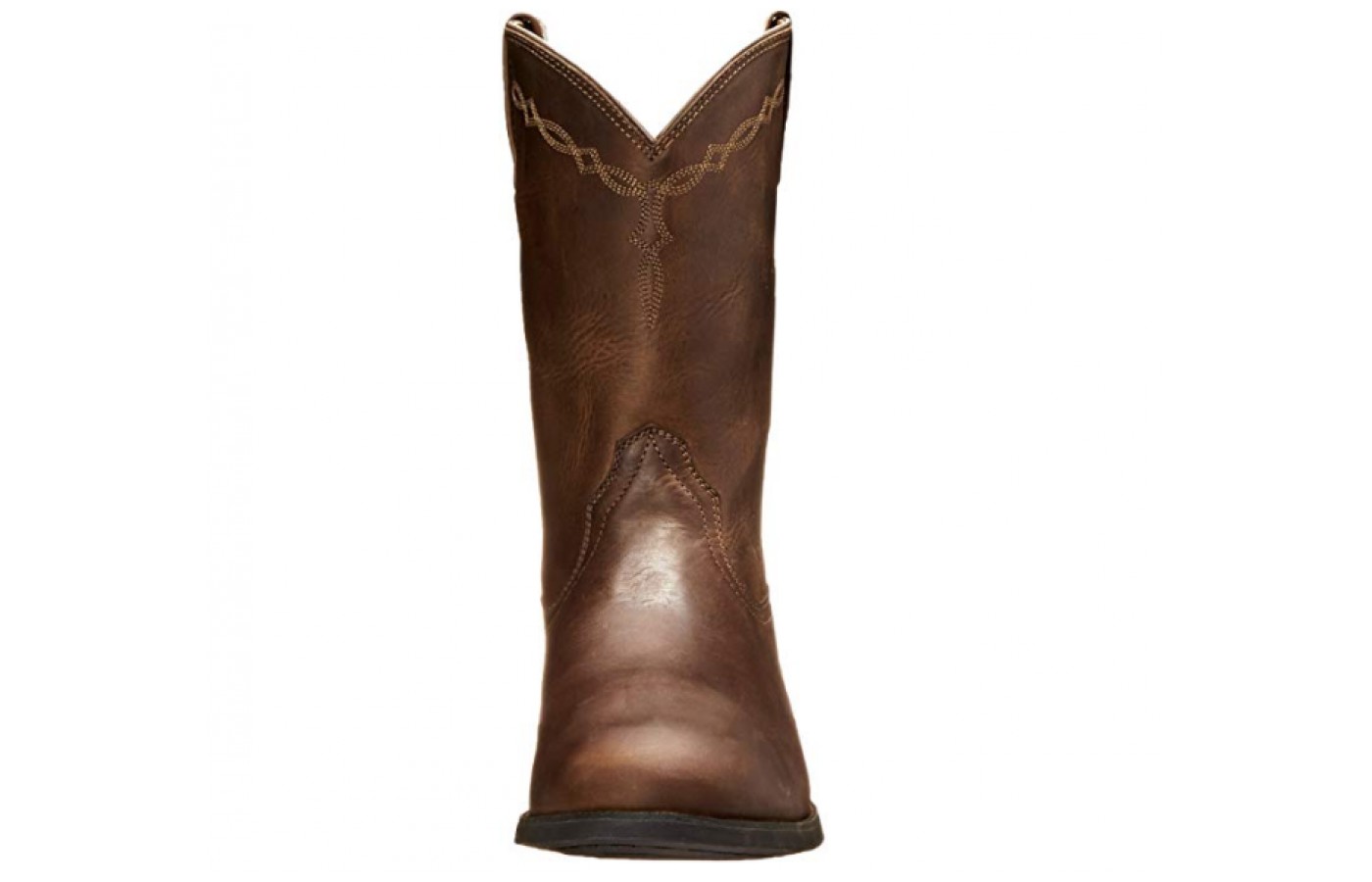 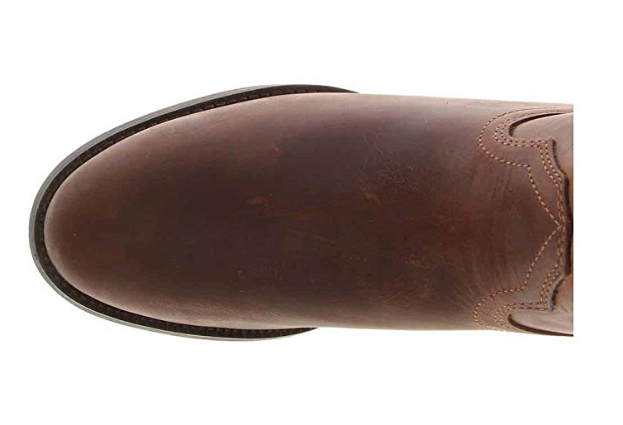 Ariat is one of the few shoe companies founded by a woman.

Yes, that’s right. Not one but two extraordinary ladies founded Ariat in 1993 and since has grown to be a staple in the American footwear choice. Their specialty is making premium footwear and apparel primarily for equestrian sports and any other type of outdoor activities. Riding boots and cowboy boots are their top-selling merchandise items and they’re the official supplier for the Federation Equestrian International.

One small but very interesting detail about the Ariat boots is the fact that they were prominently featured in the 2015 movie The Longest Ride. Scott Eastwood, the son of the screen legend Clint Eastwood plays a promising bull rider, making a comeback after a life-threatening bull riding injury.

It was precisely for this movie that Ariat partnered with 20th Century Fox, and plenty of the Ariat merchandise was featured throughout the movie.

The Ariat's Duratread rubber outsole is the main star here. Why? Because it’s an exclusive rubber compound specifically developed by Ariat and it can be found on almost every type of boot that they make. The Duratred rubber lasts longer than traditional rubber and offers maximum wear resistance, premium flexibility, and is highly resistant to acids that can be found in the barnyard. Despite what the color of the upper may be, the color of the outsole is always with the elegant black color. The black 1.375-inch work heel in the outsole gives that great-looking roper look and doesn’t hurt that it protects the shoe from any form of bacteria or filth that can be found in the barnyard.

There’s plenty of good stuff in the midsole too, so do pay attention. Ariat takes great pride in their ATS Stabilizing Support Technology that goes into the making of the boots. The technology offers stability and comfort during the entire day and ensures the best performances in those who are competing while wearing the ARIAT Mens Heritage Roper Western Boots. The ATS technology includes Moisture-Wicking footbed that adds comfort, a gel-cushion layer that helps with shock absorption, a supportive heel stabilizer, and composite forked shank that’s so lightweight you won’t even feel it. One might think that it’s too much, but it’s really not. The different parts of the ATS technology find their way in completing the comfort of the boot.

The full-grain quality leather is present not just in the upper of the boots but also in the foot area of the ARIAT Mens Heritage Roper Western Boots. They’re also lined with breathable leather lining, while the shaft measures those traditional 10 inches from the arch, perfect for making the classic roper boot. The cuff of the ARIAT Mens Heritage Roper Western Boot has a simple four row western stich pattern on the cuff.

Whether you’ll be buying the shoes to go horse-back riding or you’re a western aficionado, you’ll be buying a quality shoe that is made with high tech features and good quality materials. The Airat logo can be found on the side of the boot, and it’s just there to remind you that when you’re buying Ariat products you’ll buy the best of the best. The round roper toe and the low roper heel make you feel great while wearing them, and they take away the discomfort that you might be feeling if you’d be wearing a different type of cowboy boots.

Because the specific type of purpose that they carry, the comfort is allowed within the limits. This is not a boot that you can wear all day. It’s quite heavy and designed to be worn with doing activities like equestrian sports or just horseback riding. But you’ll be enjoying the comfort that the entire shoe has to provide because it will take away some of the strains developed by such difficult activities. The extra soft and subtle lining of the shoe does help tremendously with the comfort, while the advanced torque footbed provides offers a pleasant feel while you’re wearing them.

The duratread rubber outsole gives the boots most of their support. With the help of that special rubber used in the outsole, the ARIAT Mens Heritage Roper Western Boots will last longer, they’ll support your feet much easier, and they’ll provide you with the maximum wear resistance and flexibility. The low roper heel is put there to give your back a great posture and stability of your entire body. But support comes from the midsole too, because most of the ATS technology is implanted through various interesting and practical features. There’s a variety of beneficial features that come with the very special ATS technology and the Gel cushioned layer in the midsole is just one of them. You’d be surprised by the heel stabilizer and the moisture wicking properties of the footbed. Nobody likes a stinky ad wet feet right? Well, you won’t be getting wet while wearing the Heritage Roper.

The Mens Heritage Roper Western Boots are made to last. You’ll fall in love with the durability properties of these boots. The full gran leather provides great slip resistance grip to every inch of the foot, while the duratred outsole is there to protect the upper and the rest of the shoe with the wear resistance properties that it contains.

Cowboy boots are not known for their flexibility, but The Mens Heritage Roper Western Boots just might be the exception to the rule. And it’s all thanks to that very special duratred rubber which provides the boots with their dose of flexibility and their wear resistance properties.

The designer and engineering team at Ariat have really outdone themselves with the ARIAT Mens Heritage Roper Western Boots in terms of stability. The stability that you’re looking for can be found on every part of the boot, but mostly at the outsole and midsole. The durated rubber that makes most of the outsole is specially crafted to offer stability not just to the foot, but to transfer that stability to the entire body.

The ATS technology in the midsole offers optimal stability throughout the day and all day blissful comfort. In most of the cases, it’s one or the other. In most of the cowboy boots, you can’t get that much needed stability without sacrificing some other part of the shoe, but that’s not the case here with ARIAT Mens Heritage Roper Western Boot. They’re made to be worn with great pleasure and maximum comfort. You won’t find a cowboy shoe similar to the ARIAT Mens Heritage Roper Western Boots without sacrificing some other aspect or the overall feel of the shoes to your feet.

The premium full-grain leather that makes the upper topped with the moisture-wicking footbed in the midsole allow most of the airflow to happen in a natural and very technical way. The leather upper lets the feet breather naturally and the footbed with the quality moisture wicking properties allows the feet to remain dry during all types of activates.

The key element in the ARIAT Mens Heritage Roper Western Boots regarding the terrain is their highly regarded durated rubber in the outsole. It delivers long-lasting durability and allows the shoes to be worn on practically every type of terrain. No terrain is off limits and it shows in the overall quality of the outsole. Whether it’s hard rocky terrain or terrain that’s smooth as a baby’s bottom, they’ll be your constant companion. Oh, and if you chose to wear them while wiring a horse, they stick to the grips of that saddle with great ease and comfort without jeopardizing the quality of the boots. It’s comforting to know that these boots will support and comfort your foot during the most grueling outdoor activities without being a burden to your feet.

That duratred rubber is the main attraction in another area, and this time it’s the traction. The ARIAT Mens Heritage Roper Western Boots deal with most of the traction thanks to the traction properties off that very special rubber on the outsole. There’s no chance that you’ll have even the tiniest problems while wearing these boots, and they’ll make sure that you keep your feet firmly on the ground in every occasion and on every terrain.

Is there anything more classic than a good cowboy boot? And guess what? They’re not just for the Cowboys anymore, that’s for sure. The collar stitch is in the very familiar and well-loved four-row western style stitch, and very present are those handy pull tabs too. The classic Roper heel and even more beautiful work friendly Roper heel make the finishing touches of this beautiful cowboy boots. The ARIAT Mens Heritage Roper Western Boots look very familiar and classical in the look but they’re modern and high tech in the way that they were manufactured. They’re the perfect mix of the old and the new.

The old look is very dominant throughout the entire body of the shoe, while the new technology that was used in the making of the ARIAT Mens Heritage Roper Western Boots shines in different areas of the boots. Hose specific type of booths is the meeting point of both very different worlds. The old style of the western boots that we all used to love and respect are made even more stylish and comfortable thanks to the new ways of the modern day technology. What used to be very painful and uncomfortable to wear, now is made more breathable, stylish and supportive of the entire body, not just to the feet. Let’s take the four-row western stitch pattern. Very timeless and classic as the boots themselves. Well, that very same pattern is brought to life and made even more stylish thanks to the forward-thinking and advanced technology of Ariat manufacturing process.

Ariat does know how to perfect something that was already good, to begin with. The classic cowboy shoe. Whether it’s in black or brown full grain leather, you just know that the quality of the material that they use in the making of the boots it’s top notch and always premium. It’s durable and made to last for a long time. But along the way, you’ll be pleasantly surprised by the duration rubber inserted in the midsole that offers traction, flexibility, and stability to the feet. It doesn’t hurt that the classic roper toe and heal are ever so present in the ARIAT Mens Heritage Roper Western Boots, but the technology that was used in the making of the boots is quite something. The midsole of the boots shines thanks to the ATS stabilizing support technology and several areas of the midsole are reinforced with various beneficiary aspects of that technology.

The moisture-wicking footbed will offer comfort and airflow in the entire shoe, while the gel-cushioned layer is there to catch the shock absorption of the boots. There’s the ever-present heel stabilizer that gives support to the (you’ve guessed it) heel, but also to the rest of the body and takes care of the posture too. Oh, and last but not least, the lightweight composite forked shank offers additional support to the feet because there’s never enough need of that. Support is always needed and always welcomed in great pairs of shoes just like the ARIAT Mens Heritage Roper Western Boots. You won’t be sorry if you do decide to buy these boots, and you’d be surprised by their durability and overall comfort that they give.