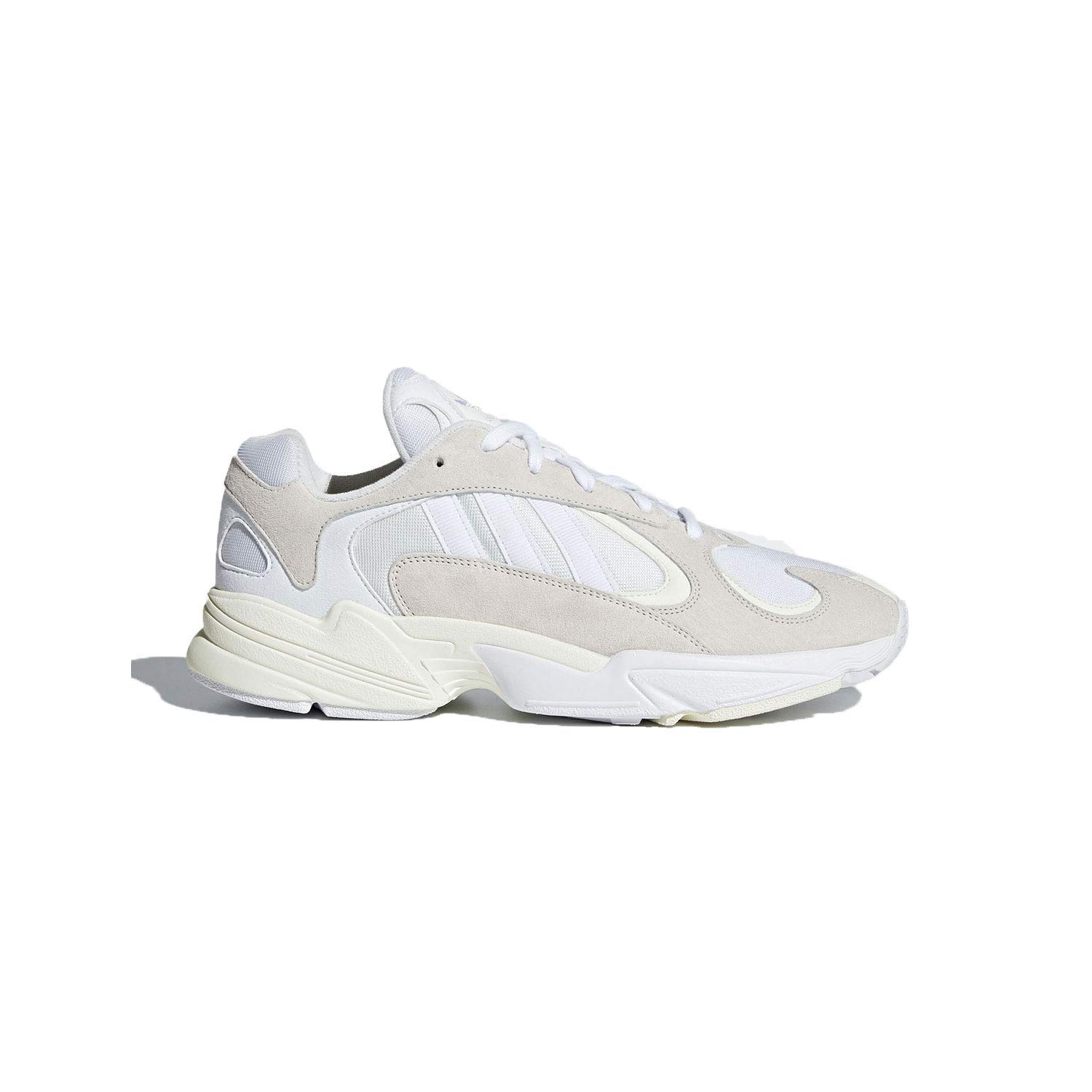 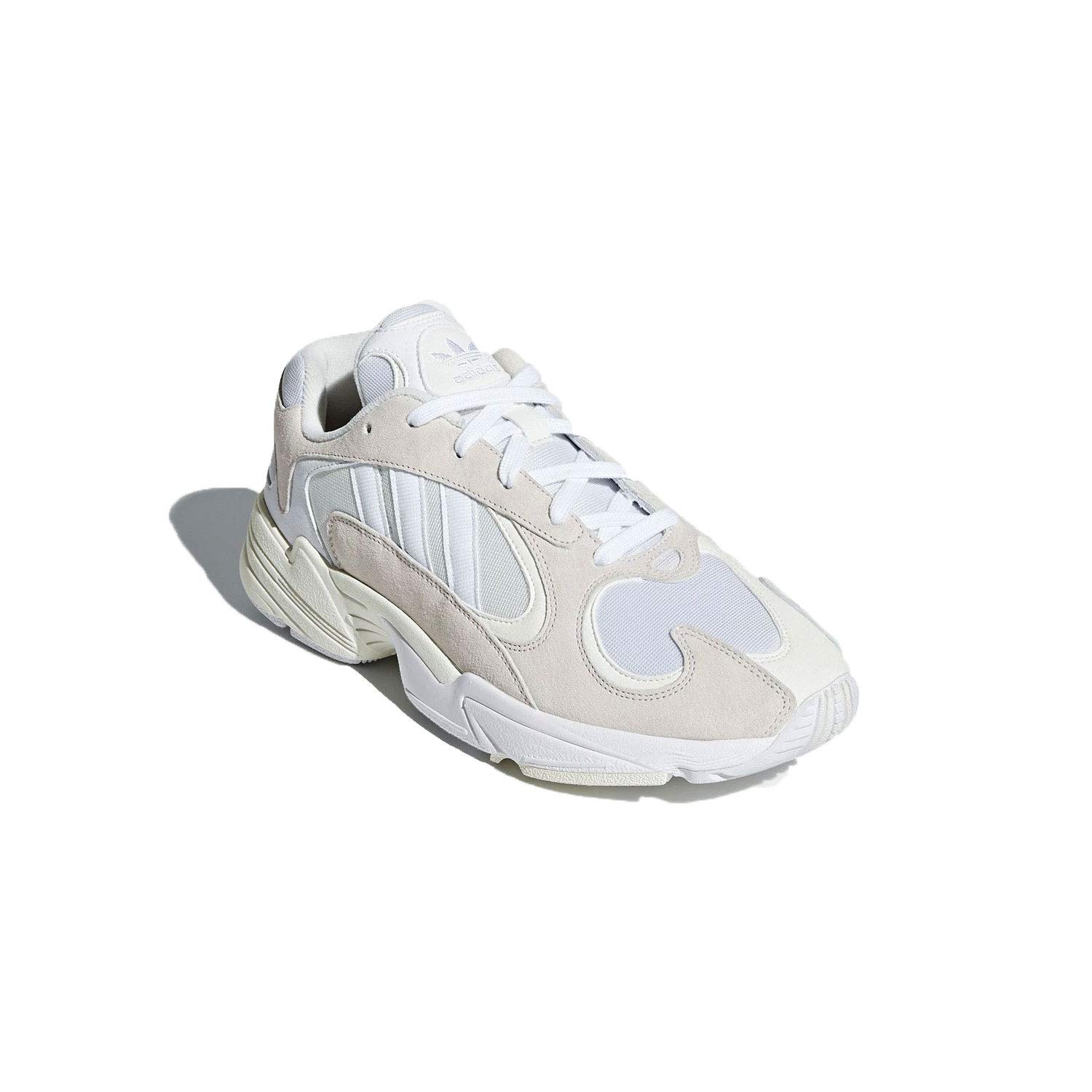 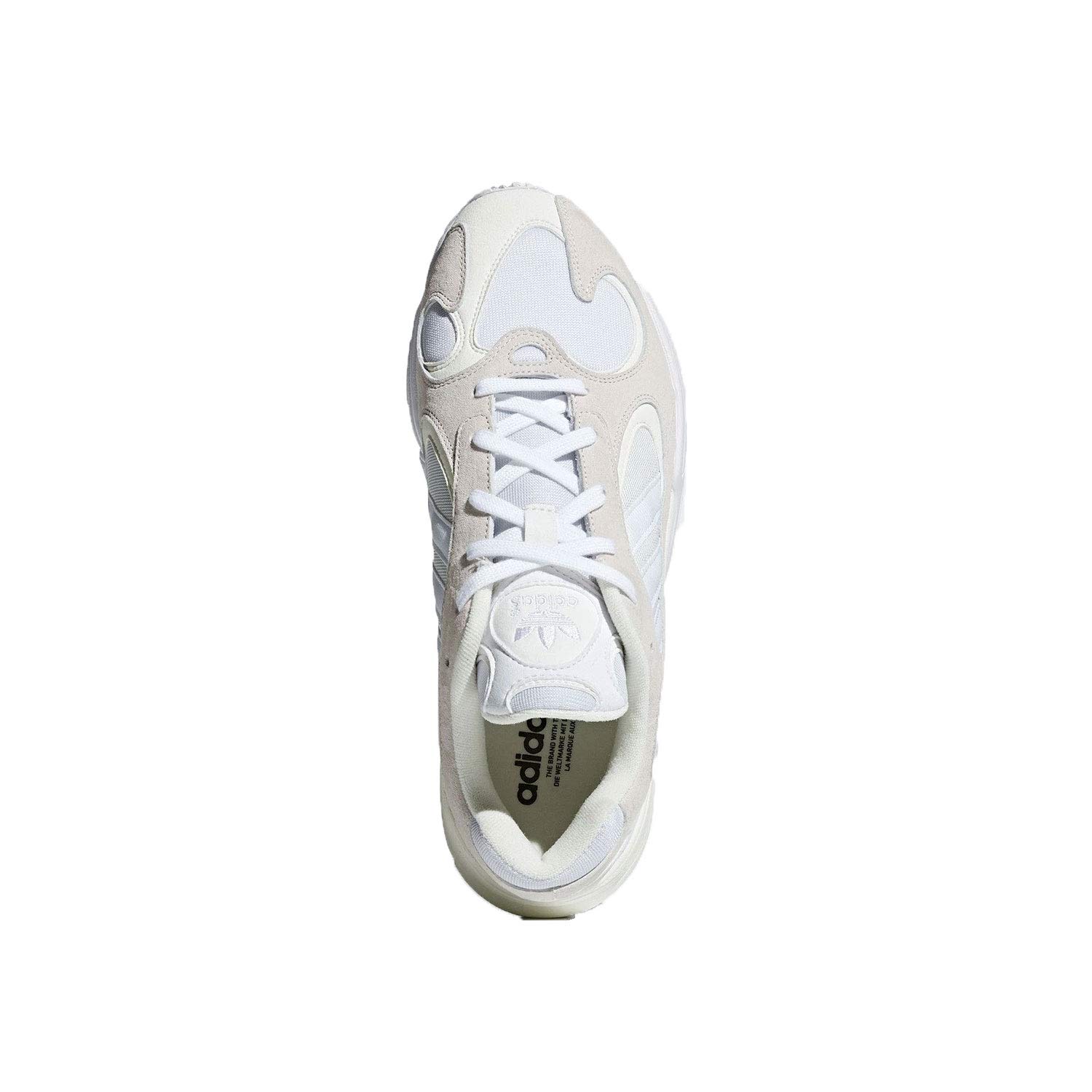 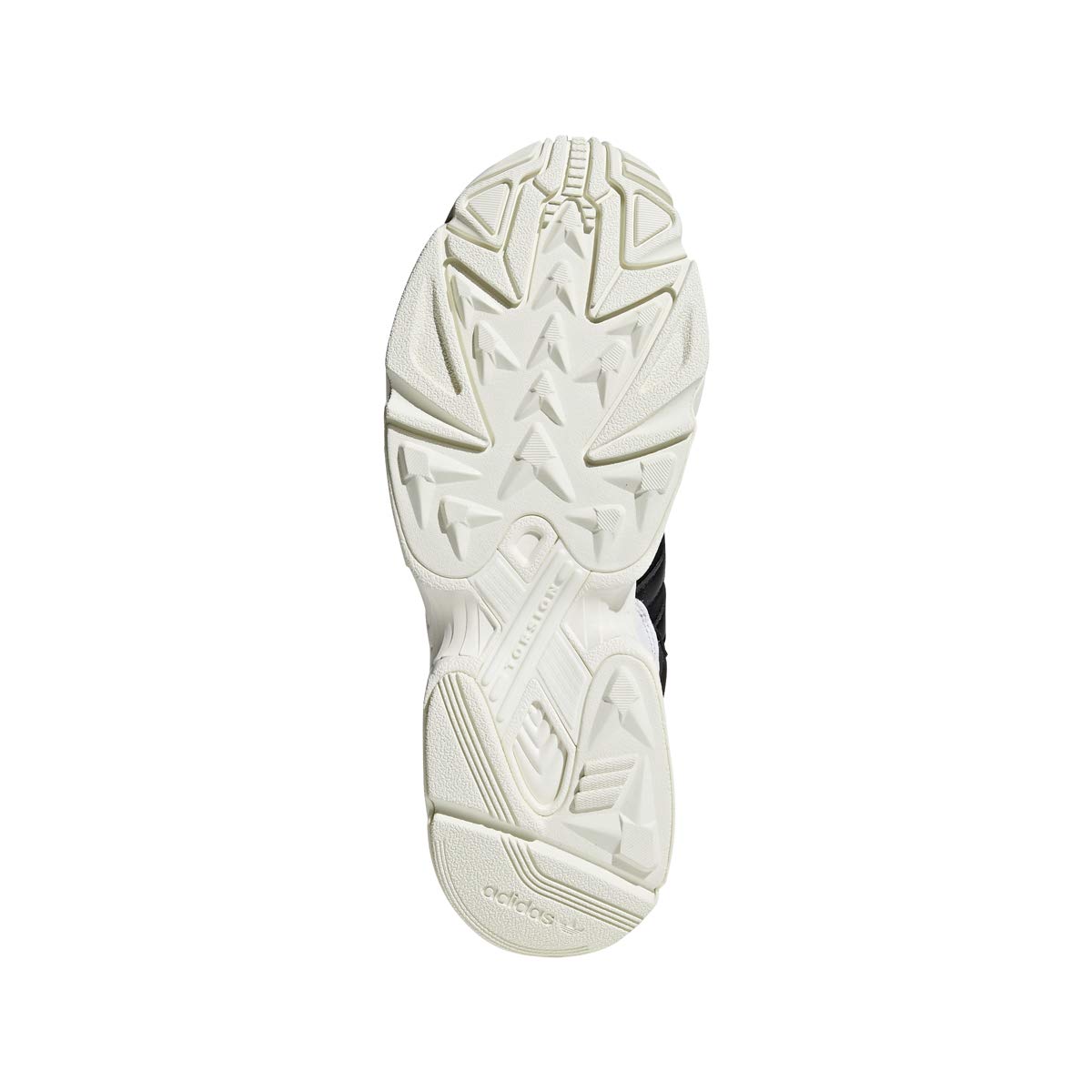 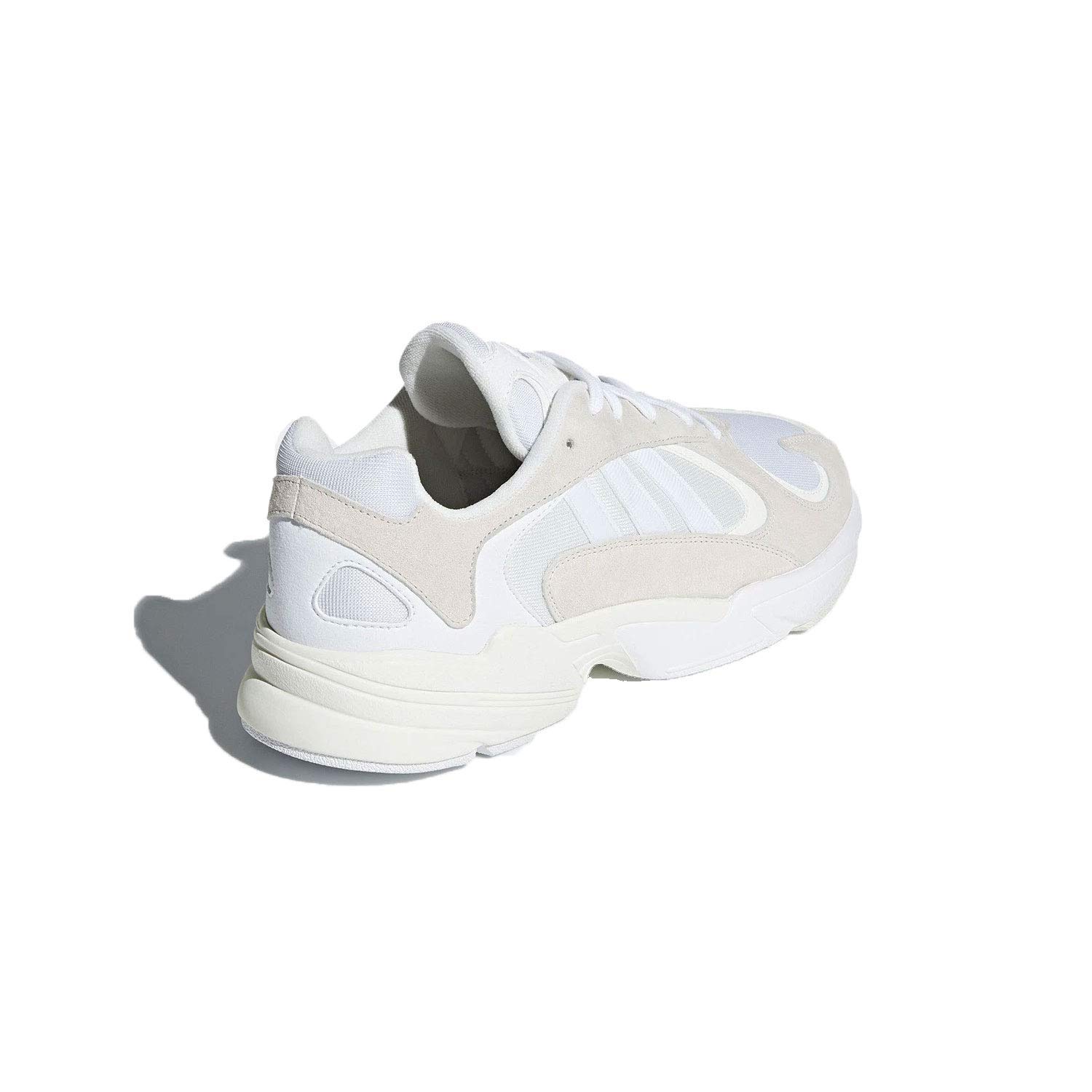 When it comes to bulky and chunky footwear, Adidas has a long history. In the past, this sports company was renowned for its classic training sneakers like the Falcon, Galaxy, Ozweego and the Temper Run. All of these trainers had one thing in common. They were specially designed for runners, so running performance had to be of the highest level. Featuring a sturdy sole, and a silhouette of Brobdingnagian proportions, these shoes had all the attributes of a running shoe but lacked attention to fashion. It wasn’t until the outdated  Ozweego got a facelift in 2013, and was transformed into a fashion status shoe, that this trend became red-hot. Following the “dad shoe” fashion trend, Adidas introduced one more model, called the Yung-1. This design is another remake from the 90s, taking a cue from the famous 1997’s Adidas Falcon Dorf.

The Adidas Yung-1 made its first appearance in January 2018, as part of the Dragon Ball Z collection. With a chunky and lightweight construction, this runner’s design perfectly fit in the 2018’s “dad sneaker” trend. It is a mix of mesh and textile upper with nubuck strips, a Trefoil logo on the tongue, and nylon signature three stripes on the sides. However, this model quickly became a favorite amongst runner enthusiasts, casual sneaker lovers, and admirers of the Three stripe brand.

Colors on the upper may stain

Adidas make footwear with a rubber outsole that according to them increases traction by 15-30% when compared to other similar styles. They claim that this traction provides the wearer with superb performance, both on dry and wet terrain. Another great feature of the outsole is the outstanding durability. This is due to the Continental rubber, which wears out very slowly.

For those who love hiking, the outsole appears to provide excellent grip on different trails too, despite the fact that they were primarily made for the roads. The Yung-1 outsole is no exception to these characteristics. With a Torsion system on the outsole, this style provides the midfoot with even higher levels of support, allowing for faster adaptation on different surfaces and a better-controlled movement. With a chunky look reminiscent of the 90s’ the most visible change is the revamped sole, that now ticks all the boxes of a good running shoe.

After Adidas introduced the Boost cushioning technology in 2013, they immediately had a positive response from their fans. What did Boost technology actually do to the already popular Adidas shoe? For instance, this innovative technology made a number of changes in how the EVA foam was used in the past in order to deliver better shock absorption. Many wearers gave positive critics on the new Boost foam regarding the high energy responsiveness, and they loved the fact that it instantly bounces back to its original form. Adidas Yung-1 features a soft and responsive EVA midsole cushioning, that not only has protective features, but it also helps in preserving the shape of the shoe, making it highly durable.

Since its release, Adidas Yung-1 made an appearance in many crazy shapes and color combinations. The most praised of them all is the clean Cloud White variation; although the Hi-Res orange with yellow edition proved to be highly popular amongst reviewers too. Many Adidas fans found that this design bears a strong resemblance to the Yeezy Boost 700, another 90’s reincarnation. One downside reported by some buyers is that the colors on the upper may stain into the other parts of the sneaker; therefore one needs to take special care when cleaning this section.

Besides the different colorways, the rest of the upper has the same features in all models. Dressed in a beautiful chaos of mesh, leather, and suede fabrics, Adidas Yung-1 fits in perfectly in the “dad shoe” trend, besides its simple design. For a chunky silhouette, this style still manages to keep high scores among runners who enjoy great satisfaction with the overall comfort. Adidas tried to keep this oversized style simple by keeping the branding very minimal. Their logo is placed on the padded tongue, while the signature three stripes are subtly added on both the lateral and medial side, hoping to give this chunky runner’s design somewhat of a sleek design.

What complements the beautiful mix of shades and fabrics are the soft, cotton laces, that are woven through hiking style eyelets. Nevertheless, it is safe to say that Adidas Yung-1 made a great comeback, and are here to stay for a very long time.

Adidas Yung-1 owes its remarkable comfort to the extra cushioned rubber midsole, which not only provides support but offers superior stability, making it an excellent choice for running shoes, although it fits perfectly in everyday wear too. Many customers were also pleased by the wide fit it comes in, which gave them more space around the toes for extra comfort, or space for insoles of their own choice. However, a number of reviewers claimed there was no need for extra insoles since another feature contributing to the all-day comfort is the well-cushioned, super soft footbed.

Thanks to the Torsion system incorporated in Adidas running shoes since 1988, this particular design offers excellent arch support to all runners out there. Allowing for a natural and unconstrained movement, the Torsion system also helps the foot to faster adapt to various surfaces, without straining it in the process. It is a system that not only does wonders for your arches and feet, but it also increases the durability of the shoe itself. With this in mind, Adidas Yung-1 turns out to be an excellent option for runners and walkers who tend to pronate, and a little extra structural support comes in very handy.

There is practically nothing on this design that will make one suspicious of its quality. Since Adidas Yung-1 came back and is here to stay, it certainly behaves that way. While the upper seems like a perfect blend of colors and a high-quality material, the midsole and outsole help extend the life of this style. Many buyers claim that the Adidas Yung-1 still serves them well, maintaining its original shape and comfort after extended use.

When it comes to flexibility, all components of the Adidas Yung-1 work so well together to help the foot move the best it can. While the soft, yet strong upper allows for unconstrained movement of the foot, and the EVA midsole allows for flexibility in all the right places, the Torsion stability system provides stiffness where needed. Thanks to these features, runners and walkers may benefit a great deal from Adidas Yung-1, making it the 19th best Adidas sneaker.

Whether a shoe is designed for running, walking or training, your feet will always require protection. The protective attributes in the Adidas Yung-1 gain power from the thick, rubber outsole, the EVA foam midsole, and the soft, yet well-built upper portion. While the elastic properties of the EVA midsole ensure flexibility and superb shock-absorbance, the thick sole makes sure your feet stay well protected from any unwanted sharp objects and rocks. In order to ensure the foot is secured and snugged down, the adjustable lace-up closure continuously works together with the whole upper.

With a vintage facade dressed in a variety of colors and materials, Adidas Yung-1 is praised by many reviewers for its lightweight and breathable design. Although the upper portion consists of many panels and overlays, the fact that it uses mesh material, clearly indicates that there is an ample airflow. This air circulation keeps your feet sweat and odor-free whether you are running or walking. The thinness of the upper and the mesh materials promote better comfort for the wearer no matter how long they have the sneakers on.

The most important element that provides stability in the Adidas Yung-1 is the signature Torsion system. Deeply rooted in the midfoot portion of the sole, this stability system ensures superb support for runners and walkers alike, making a huge difference among those wearers who tend to pronate.

Much like its predecessor, the Falcon Dorf, Adidas Yung-1 utilizes all portions of the design in order to deliver overall comfort. The crucial area responsible for a great grip on various terrain is the outsole. Thanks to the sculpted rubber outsole the wearer can take this pair out for a run or just show them off on the busy city street.

Due to the Torsion system and the EVA midsole, one is certain to receive not only an exceptional grip but outstanding stability and support too. Whether you decide to take this model on a night out or for a run in the park, rest assured your feet will thank you later on.

If you were a witness of the original Adidas Falcon Dorf rise, you probably had no idea that they would be brought back to life. Twenty years later, the oversized, chunky style makes a triumphant comeback and doesn’t seem to be going anywhere. Many big names have already released a good number in their collection for 2018. These competing styles will never cease to look alike. So, if the 90’s comeback is the next big thing, you can try and fit in with a pair of Adidas Yung-1 for a start. Many wearers regarded this style to be very sleek and unique. When compared to other retro reincarnations, Adidas Yung-1 is admired for the wild color blends, which resulted in so many matching color schemes. Adidas made sure to deliver a selection for all ages, styles, and needs.

Some of the most praised designs among reviewers are the Dragon Ball Z collection, White Cloud, Triple Purple, Triple Black, Alpine, Royal-Scarlet and the Craft Ochre to name a few. Also, while Adidas Falcon was revamped into a woman shoe only, the Adidas Yung-1 works as a perfect style for men and women alike. When it comes to size, this model does run wide, with a relatively wide toe box, which those with wide feet will really appreciate. However, for all of you with narrow feet, you may want to get a half size down or enjoy the extra space around your toes.
With the Adidas Yung-1 being so versatile, it is easy to match with a variety of clothing. It represents a beautiful blend between the trendy “dad sneaker” and the vintage runner, and with a crazy colored facade like that, it is hard not to want a pair for yourself.

There is no specific data on the weight of this model, but despite its bulky and chunky looks, the Adidas Yung-1 is notably lightweight according to a number of buyers.

When it comes to trends, Adidas makes sure not to stand behind, and they always manage to do an excellent job. In January 2018, the Three-striped brand introduced the Adidas Yung-1, which is nothing but a rebirth of the Adidas Falcon Dorf from 1997. Despite the uncanny resemblance between the two, this model quickly became a must-have sneaker among young generations. And why wouldn’t it? After all, it is trendy and stylish, can match almost any piece of clothing, and on top of that, it is very comfortable and lightweight too. Since its release, many Adidas fans went crazy over the blend of colors and fabrics on the upper, such as mesh panels, and suede and nubuck overlays, which made Adidas Yung-1 extremely versatile.

After all those successful releases, Adidas tried to dress this model in numerous different colorways, which turned out to be an even greater success. And they won’t be stopping there! The line is about to get new color additions in 2019. But, until the updates are out, there is no reason why you shouldn’t have a pair on your feet right now. To make it sound even better, this bulky silhouette dressed in retro color schemes, really stepped up its game, and for now, it is voted as the 19th best Adidas sneaker ever.