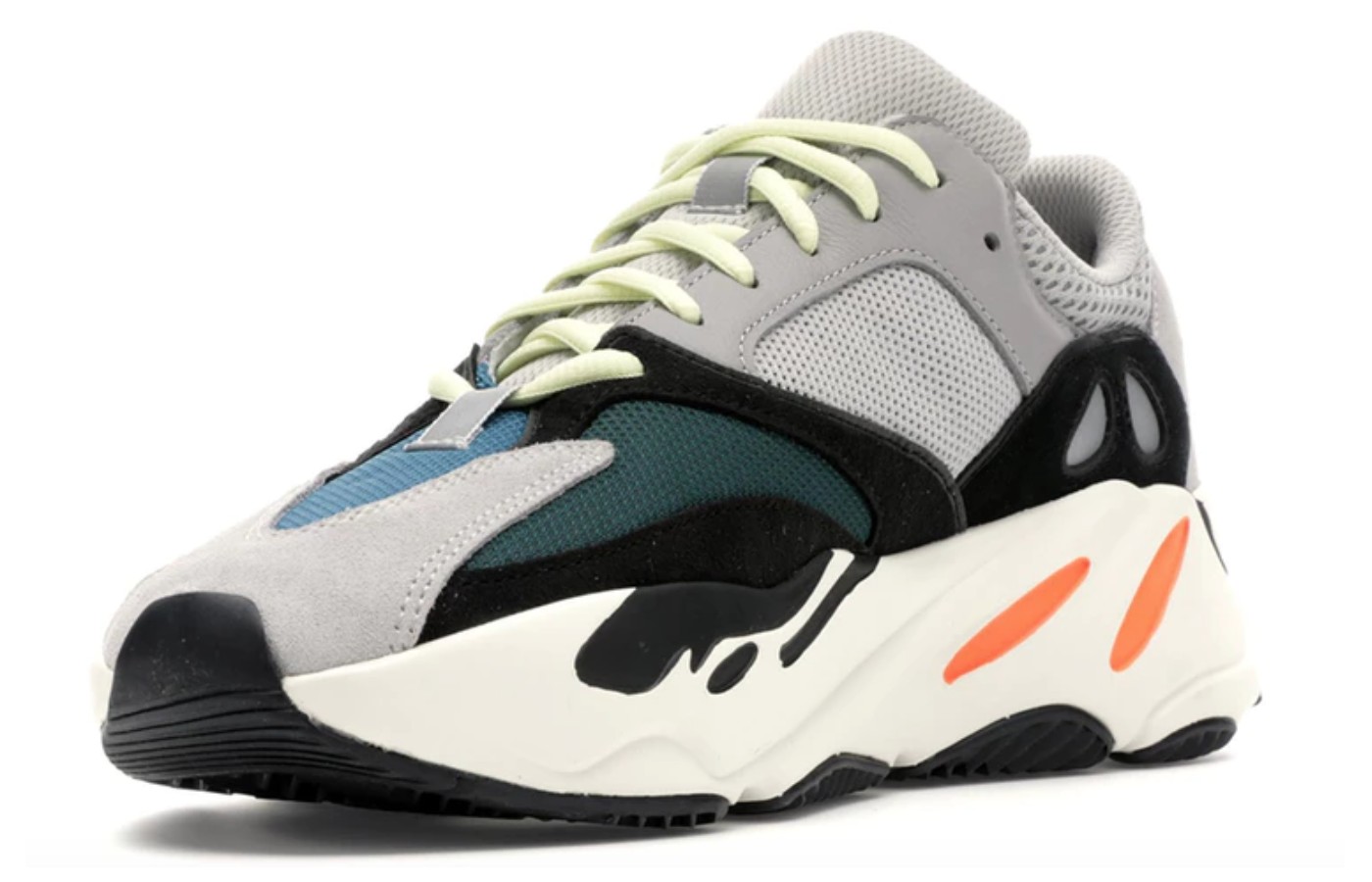 It’s about time that Kanye and Adidas did another collaboration.

The 350’s have nothing on this runner. The 700 is a shoe that will provide a wearer with what they need in terms of both style and comfort, all while ensuring that one has full functionality while in use. At first glance, this awesome collab may not look like much (seriously, the design is one of those abstract types that usually takes a bit of getting used to in order to enjoy). Once one gets used to the design and what it has to offer, it becomes apparent that it’s a shoe that will easily become one of, if not your favorite shoes of all time.

While these are Adidas running shoes (and the design of the shoe does live up to this), the Yeezy 700 by Adidas has an outsole that would make one angry if it were to get even remotely soiled. The outsole of the shoe is designed from a thin layer of hardened rubber. The rubber on the bottom of the shoe has actually been given a “wave” pattern of sorts; this keeps in tradition with the name of the initial release of the shoe. This pattern allows the shoe to provide wearers with what they need in terms of grip (in addition to the tread) and also stands out if one were to actually decide to show the world what the bottom of their shoe looks like.

The midsole of the 700 keeps in line with the New/Old age style that shoes have had for the last decade. The great thing about the midsole about this shoe is that the midsole is designed using a Boost layer; this material ensures that wearers have all that they need in terms of comfort from this particular model and don’t have to worry about discomfort that may stem from lack of support or responsiveness; this material is known for providing a cushy feel that is above that typically experienced by runners.

The upper of this runner is a spot where Adidas and Yeezy decided to go above and beyond. The 700 features a blend of various materials all throughout its design. The use of materials such as 3m and various different variations of leather and mesh ensure that wearers have what they need in terms of comfort from this shoe. The shoe features a mesh underlay which allows it to be rather breathable and ensures that smells don’t accumulate in the shoe’s design. In addition to this, the shoe makes use of highly visible materials such as 3m; if the 700 is used for running then this material does a good job to keep you protected.

As mentioned in a previous section, this shoe features quite a few sections that allow the mesh underlays to be made present. The design has various underlays which make it possible for air to flow in and out of the shoe. One of the cool features of this shoe’s design is that in the places where the mesh is made present the shoe features 3m underlays which allow it to provide it’s wearers with a bit of casual style as well.

While these shoes are quite fashionable their design is one of a running shoe; this can be noticed by simply looking and taking note of the sleek cut of the shoe overall. In addition to the sleek cut of material in this shoe’s design, the actual placement of the materials opens this shoe up to being called something that not many shoes are able to be called, stylish. The use of various layers and materials in the shoe’s design allows this shoe to be worn in various different areas aside from simply athletic events. To be quite honest, the sheer attractiveness of this shoe is something that makes one not even want to wear it for athletic events; you’d be fine simply rocking the shoe.

When it comes to longevity, the various Yeezy models have been relatively good at being long-lasting; the Yeezy 700 hasn’t dropped from this standard whatsoever. The Yeezy 700 has a well-layered upper which allows it to provide functionality for the wearer of the shoe for a relatively long length of time; the use of overlays makes the degradation of its materials during a more cumbersome activity. In addition to this, the design of the outsole and the tread used throughout ensures that wearers don’t have to worry about premature wear appearing in the design while the shoe is in use; this is something that is sure to delight any individual due to the longevity that it allows the shoe to have.

This shoe is meant to be a fashionable running shoe; this implies that it will have features that allow it to protect one’s foot in various different types of running environments. For instance, the upper of this shoe features various overlays that imbue the design with ample stopping power which can then be used to prevent the wearer’s feet from having harm come upon them. The shoe also makes use of reflective materials throughout its design which enables it to provide it’s wearers with a bit of visibility when used in relatively dimly lit areas.

Boost is known for its ability to provide its wearers with what they need in terms of responsiveness when in use. The material easily moves along with the movements of the wearer’s feet; this allows the shoe to provide wearers with ample comfort and a high level of energy return when in use. The design of the upper is also quite flexible despite the fact that it has various overlays; this flexibility allows the upper of the shoe to move in tandem with the movements of the wearer’s feet. If you can stand to see your beautiful 700’s getting beaten up during use, the responsiveness that these shoes provide will lessen the pain.

The shape of the midsole of this shoe is done in a way that is meant to provide wearers with what they need in terms of support as well. The midsole of the shoe is a wide base that provides comfort and cushioning for the various high-pressure points that make up the base of the wearer’s foot (or the underfoot). The wide design of the midsole also takes away from the space available to the upper thereby allowing the shoe to provide a snug fit that translates into support for the side of the feet.

The 700’s are meant to be a pair of all-purpose road-running shoes. The design of the sole unit in this particular pair of shoes allow them to provide the wearer with what they need in terms of longevity when used on various road format (and with relative ease I might add). The use of tread in the design of the outsole of this shoe is also one of the reasons why the shoe provides wearers with such a great feeling of safety when used on roads. In addition to the ability to be used on roads, the shoe works relatively well when used on indoor surfaces as well.

The pricing point of these shoes is something that may turn off of the average individual. For an adequate pair of the shoes, one would expect to spend a decent sum of money. With that being said, the quality that comes with purchasing these shoes does well to justify their purchase; these are a pair of shoes that will last for a period of time that goes far beyond that which an individual can expect to experience with a lower-priced shoe. With that being said, patrons, when purchasing this shoe, also get something that is much more stylish than their typical shoe.

The tread on the sole unit of this shoe will definitely get the job done if the grip is what you’re looking for in your particular shoe design. With that being said, the design of this shoe, the 700 and the use of a thin layer of rubber as well as adequate gripping materials enable this shoe to provide to its wearers what they need in terms grip/traction when the shoe is worn. The thinness of the material compared to the functionality that they provide to their wearers is what makes their use so spectacular; it isn’t often that one comes into contact with shoes that have such a thin outsole that still sticks to the ground like it’s nobody’s business.

The lack of space that the upper of the shoe has for movement means that wearers can easily move around while in the shoe without feeling insecure. This means that the upper of the shoe is relatively slim and provides wearers with what they need in terms of protection while the shoe is in use. The wide base of the midsole also provides a bit of stability to the 700’s design; this stability stems from the fact that the midsole works to make sure that the sides of the wearer’s feet are “covered” in a sense.

There has been no drop specified for this specific model but it would be safe to say that it is rather large. The appearance of the midsole and the lack of rounding in the toe area implies that the time that it takes for the wearer of the shoe to transition while worn would be longer than that experienced in barefoot shoes.

Overall, the Yeezy 700 isn’t a shoe that one would simply “overlook”. This hot collab between Yeezy and Adidas is something that has been long-awaited and much-needed. The subtle level of style that this shoe adds to the Adidas line as well as the ultimate comfort of the shoe itself allows wearers to have all that they need in terms of comfort and ensures that they have the best experience possible. If one can get past the rather high price tag of this beast, this is definitely a must-get for the collection.