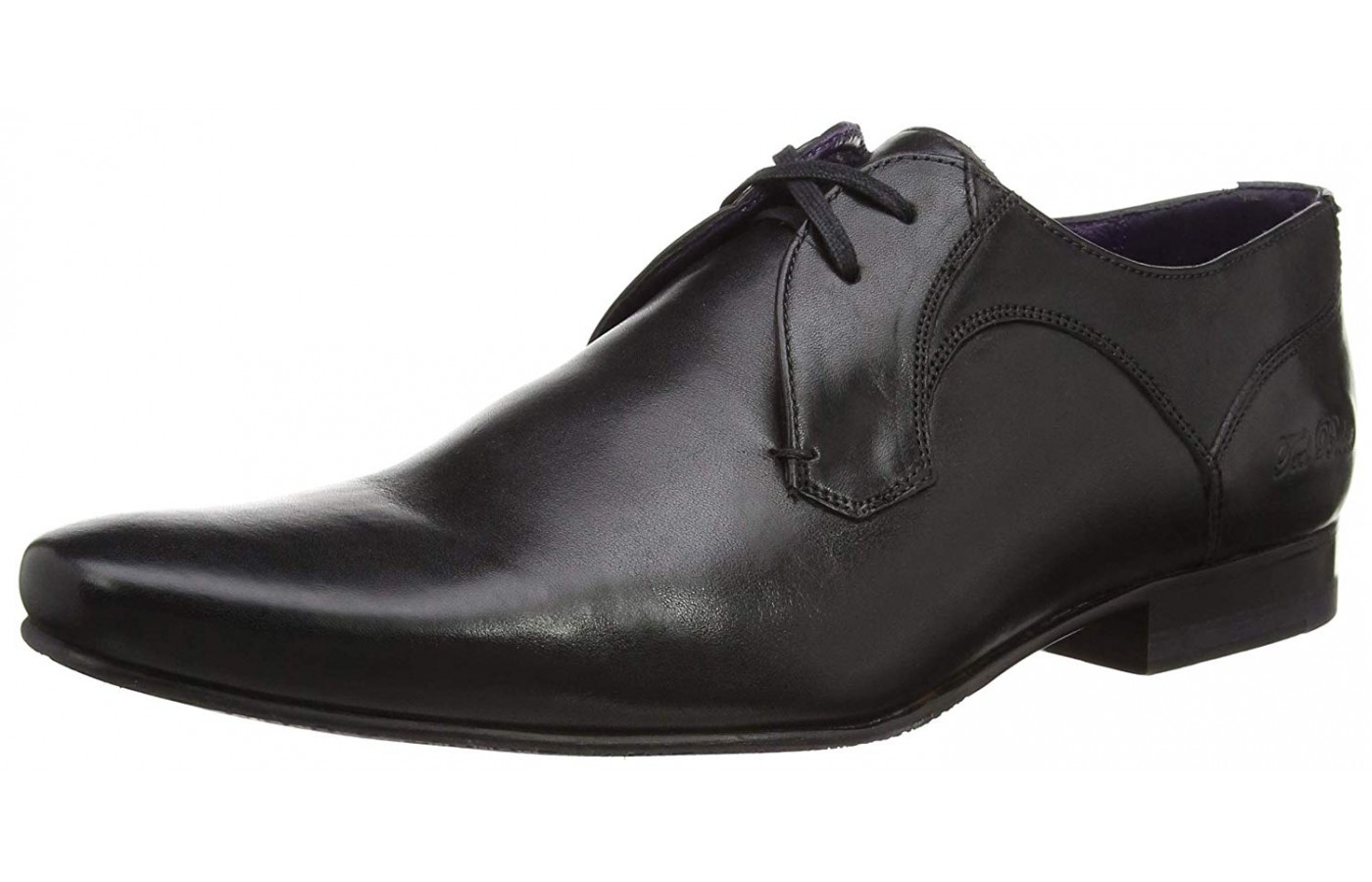 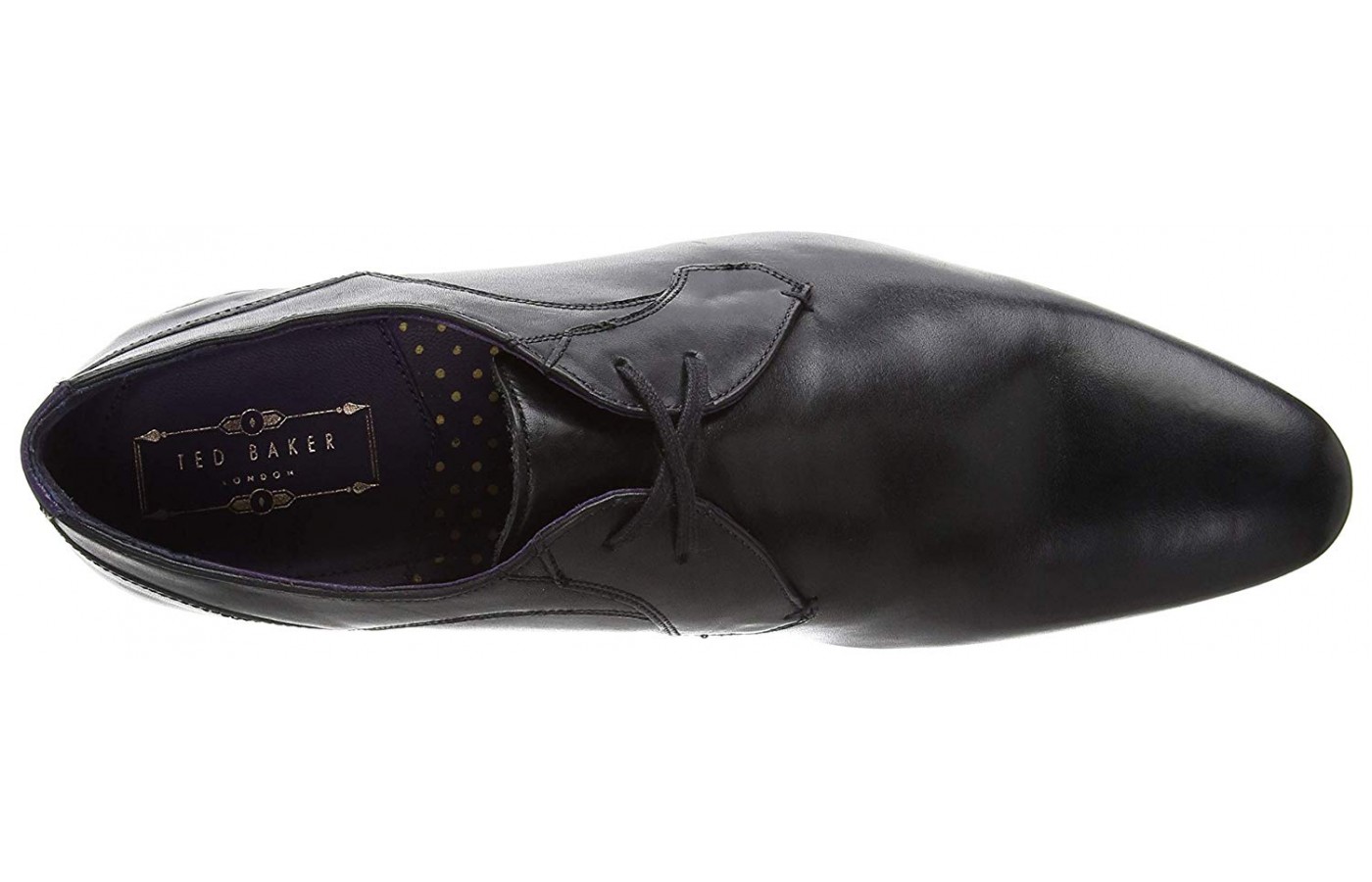 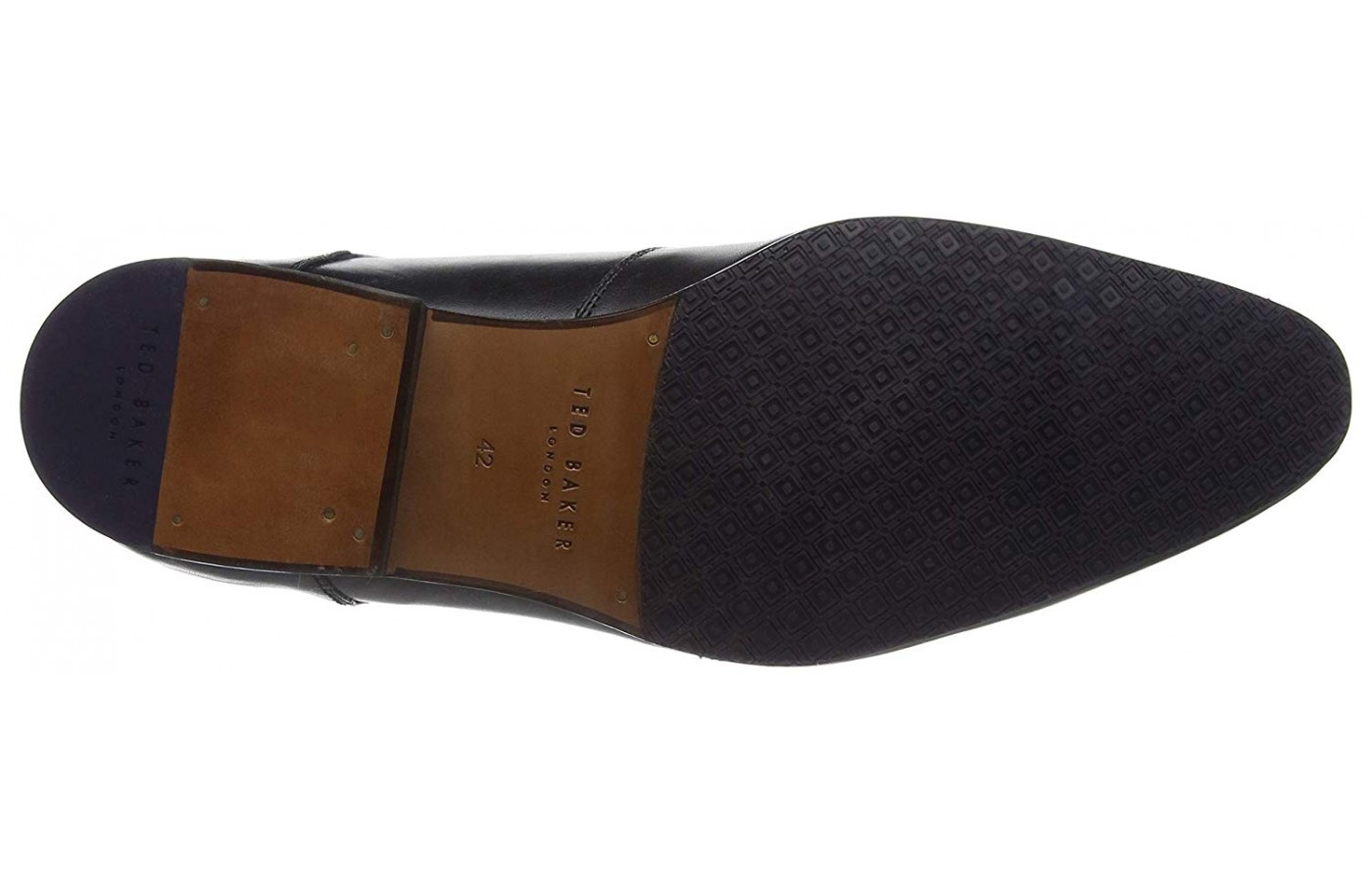 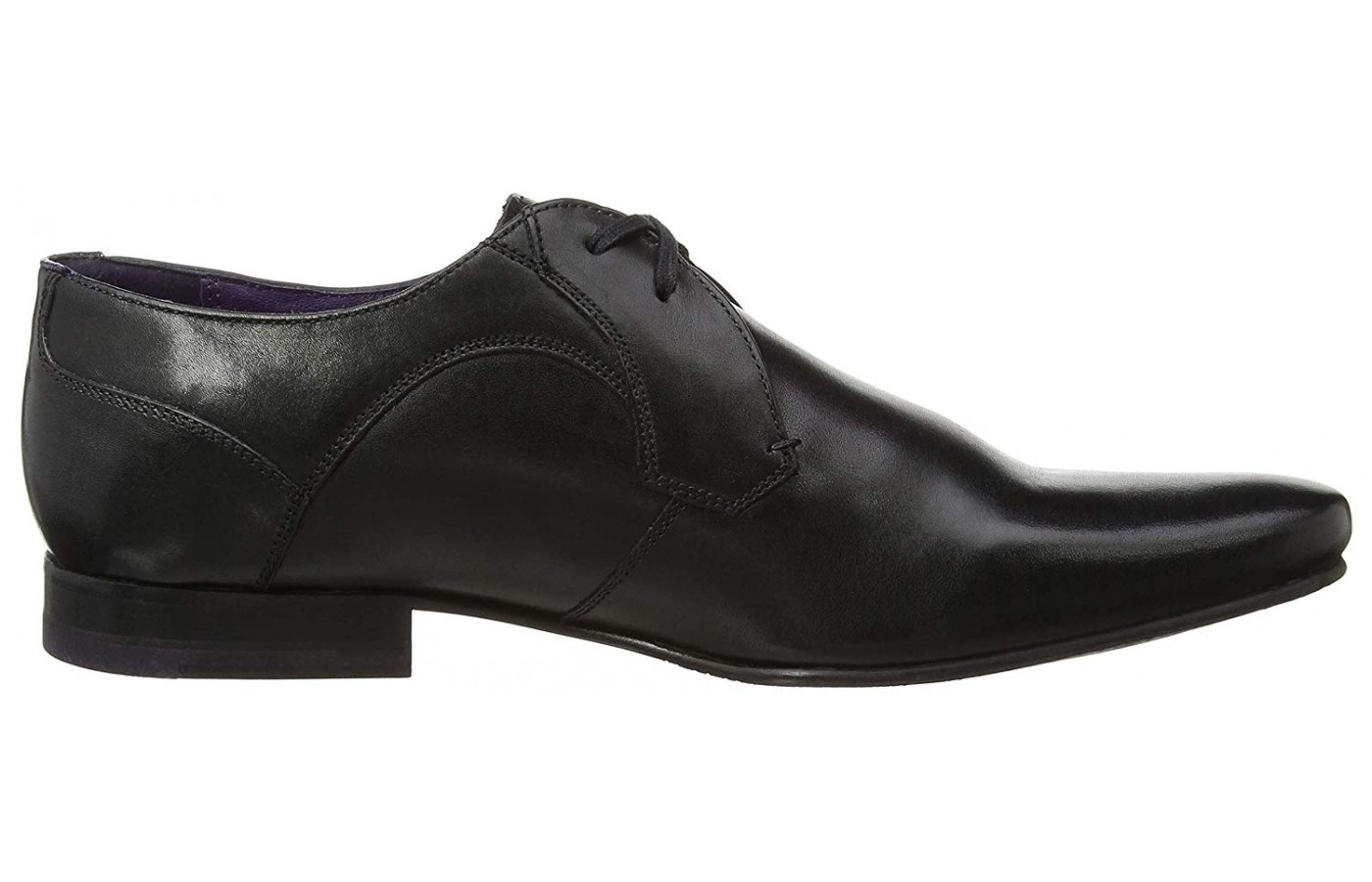 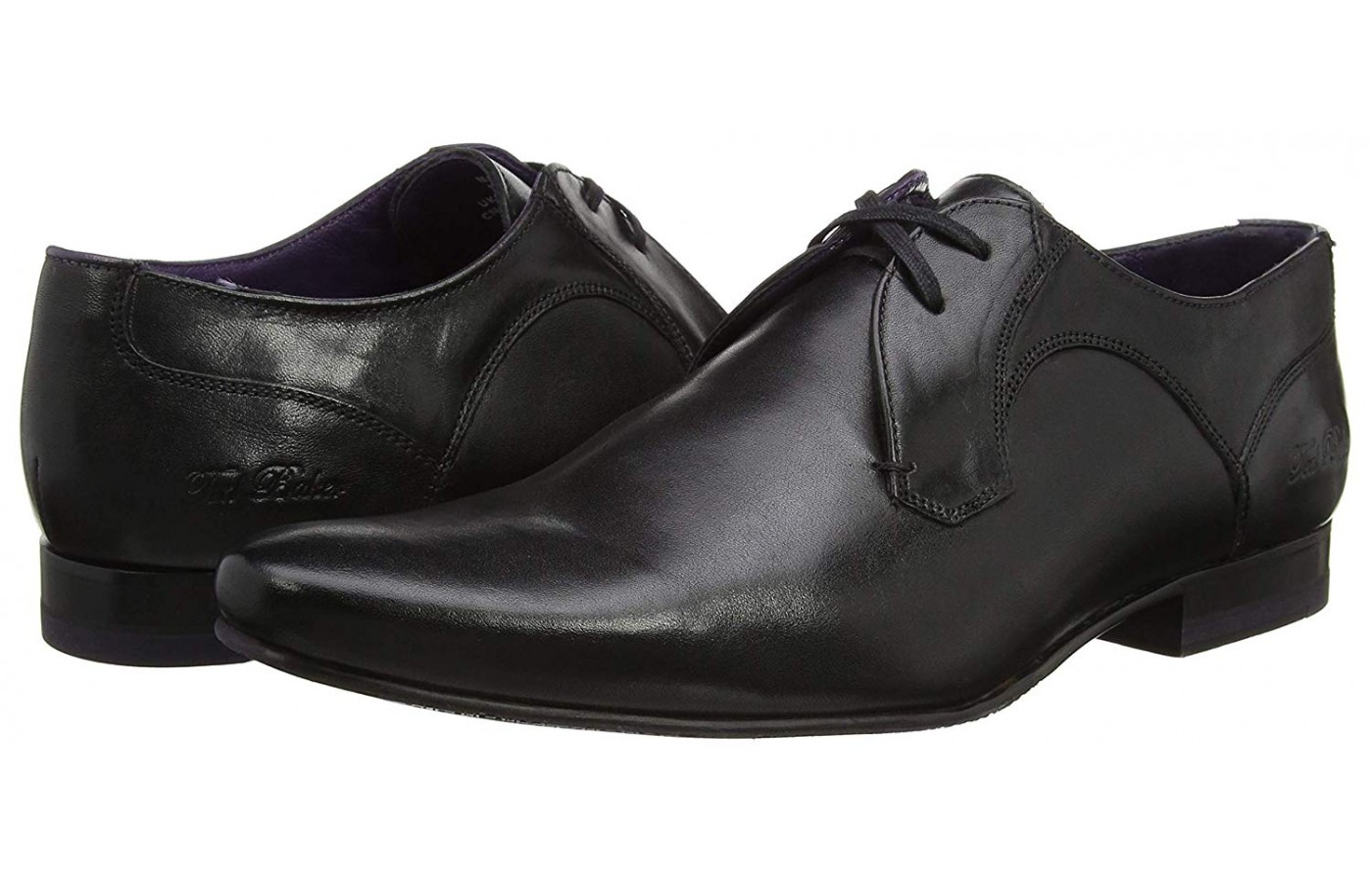 Do you need the perfect shoe to pull off your dapper look for an upcoming important event? Do you need to impress a girl you like or her parents or your boss? Do you just want to feel instantly more confident? The Martt from Ted Baker may be a great fit for you. It is crafted in a timeless style with classy, sleek leather.

The Martt falls into the footwear category “Derby shoe”. The heel on the upper material features an embossed brand logo. The sole is a combination of rubber and leather, giving you benefits from both. The heel and forepart are rubber and the waist is leather. The lining of the shoe is a rich purple (which may transfer onto white socks) and includes a pattern with the Ted Baker logo throughout.

This derby shoe is offered in four different colors. These include black, two shades of brown, and tan. The sizes available are seven through sixteen and there are half sizes from seven and a half to twelve and a half. The only width offered is medium, so if you have narrow or wide feet, you will want to consider that before your purchase. Some consumers have reported that this shoe is uncomfortable around the ankles and you’ll want to wear thicker socks.

In 1987, a fishing trip that Ted was on brought about the motive to create a brand globally. The first store officially opened its doors in Glasgow, Scotland in 1988, and soon after in Nottingham Exchange Arcade and King Street in Manchester. Goldberg and Sons bought the company outright in 1990. By 1993, Ted Baker was opening doors in cities such as London, Soho, and Nottingham. Also in 1993, Ted Baker officially became a company that is privately owned.

In 1995, the company expanded to offer the lines Ted Baker Lite and Ted Baker Woman. Wholesale got off to a running start in the United States in 1996. That same year, another new line was launched. This line is called Teddy Boy. In 1998, Ted Baker joined the world wide web and created their site (www.tedbaker.co.uk). The first American standalone store graced the city of New York. To top it all off, Underwear and Skinwear lines were launched in 1998 as well.

The Footwear line from Ted Baker was finally introduced in 2000, as well as Teddy Girl. In 2001, Sunglasses and Eyewear joined the ranks. In 2004, Ted expanded his reach into New Zealand and Australia. Ted Baker became the supplier of the Qantas Socceroos suits to be worn in the World Cup in 2006. In 2007, Ted yet again broadened its horizons and created a line for jewelry as well as a couple of mobile phones. They were named The Needle and The Button.

Not only does Ted Baker offer products all across the board, but there is a store in London that includes a shoe shiner, virtual concierge, and a barber. For the twenty year anniversary year, Ted Baker opened the doors to eight more locations. The best thing about that year was that Ted Baker was awarded the Superbrand status which ensures consumers that the brand is one of the best five hundred in the United Kingdom.

Lingerie entered the picture in 2010, as well as a new website for the United States and the first styling studio operated via Twitter, called ‘Take on Ted’. To celebrate its twenty-fifth anniversary, Ted spent that year focused on opening more doors around the world than had been done before. Luggage, audio, and home fragrance were introduced to the lineup in 2014.

In 2017, Ted Menswear acquired an Instagram account. To celebrate thirty years in 2018, Ted brought Kidswear and Lingerie to the Ted Baker website. The project for designing your own top (‘The Shirtfather’) debuted this year as well. Surprisingly enough, the thirtieth year also brought Ted’s first campaign for advertisement. It was run across the billboards, magazines, and buses. The advertisement captured Ted’s humor along with an iconic piece from the Womenswear line.

In the fashion world, people consider the closed system more formal than the open, but honestly, it’s all about personal preference. They both can be used for formal wear, and the derby shoe can prove more versatile by being a bit more casual.

The Martt features subtle details that add to the classic beauty of the collective shoe. There is a pointed toe which automatically gives any outfit a touch of attitude and style without even trying. Since there are only two eyelets on the top of the shoe, there is more space to show off the shiny leather upper material. The heel of the sole is separate from the forepart, creating an even more formal appearance.

The upper material of this derby shoe is one hundred percent sleek premium leather. There are many advantages to having leather shoes. Not only do they effortlessly provide a sophisticated, mature look, but they have very great functionality properties as well. The leather of the upper will be able to help keep your feet protected, comfortable, dry, and cool.

Leather is flexible and will, over time, contour to the shape of your foot. The longer you wear them, the more personalized your fit is going to feel. If you try on your leather shoes and they feel stiff at first, that’s normal. They do need a bit of break-in time.

The leather isn’t extremely porous, therefore doesn’t allow an abundant amount of airflow. This does not mean that leather isn’t breathable though. Leather has the very unique ability to not only absorb the moisture from your feet, but it can then proceed to expel that moisture in the form of vapor. This will help keep your feet dry and cool without weighing down the leather with the moisture it’s absorbed.

Leather works hard to protect you in other ways too. Leather is stain resistant, abrasion resistant, and stronger against potential punctures. It will continue to protect your feet as long as you take proper care of it and repair or replace it when needed. Be sure to purchase the right cleaning supplies for your shoes and have a regular upkeep routine along with a deep cleaning routine.

The outsole of your shoe is the bottom, the part that comes in contact with the terrain you’re walking on. It is the part of your shoe that protects your very sensitive soles. It is also one of the parts of your shoe that can help provide you with comfort, support, shock absorption, and protection from moisture.

You can still enjoy the style and grace of leather in between the forepart and heel. This section is called the waist. The forepart and heel are covered in rubber because they are the sections of the shoe sole that need the most protection, support, and grip. The heel of the Martt is even slightly raised to give you a subtle lifted look.

When it comes to footwear, comfort is of utmost importance. Now, when it comes to formalwear, many people sacrifice, even if it’s just a little, their comfort in order to achieve a classy and sophisticated look. This shouldn’t have to be the case. Ted Baker has crafted this derby shoe to try to solve this problem by offering class, sophistication, and comfort at the same time.

While this shoe does have a pointed toe, it is not sharply pointed, and the toe box doesn’t suffer any shortcomings because of the design. The leather upper will provide comfort with its flexibility, ability to conform to your foot, and breathability. The soft lining is going to be more comfortable on the top of your foot than the backside of the leather would.

There is not a cushioned insole included in this shoe, so you may want to look into buying inserts, whether you have foot trouble or not. You can never be too careful with your comfort, especially if you’re going to have your feet in the same pair of shoes all day long.

The way a shoe fits you isn’t just important while you’re trying them on to decide if you want to buy them or not. You need to know that the fit is going to work for you long-term. Is the shoe adjustable? Where does it sit in regards to your ankle bone? Do they become more comfortable over time? Is there cushioning for support around your ankles?

The Martt derby shoe from Ted Baker is in fact adjustable. It does only have two eyelets, but you can still tighten and loosen them to your desired fit. The opening of the shoe is cut just below the ankle, which should make them more comfortable for some people. That will depend on how you prefer your shoes to fit as far as the shaft height goes.

These shoes will be comfortable from the get-go, but they will become increasingly so as time goes by because the leather is going to stretch and conform to the shape of your foot. There isn’t any additional cushioning on the inside of the shoe that will support your foot anywhere to make for a more secure fit. But that doesn’t mean that you can’t purchase inserts to fix that.

Most often, when you’re shopping for footwear or anything for that matter, you’re looking for the one that’s going to last, right? The good news with this shoe is that both leather and rubber are durable, and there is plenty of both. The upper is one hundred percent leather, and when taken care of properly, leather has the potential to last for over twenty years.

Rubber is also a pretty durable material, and it’s what is used for the forepart and heel of the outsole.

For the money, the quality of the materials, and all of the benefits that come along with them, these shoes are more than worth it. Yes, certain consumers will need to add cushioning for comfort or support, but that is a very small price to pay for the classy, sleek style of these pointed toe derby shoes.

Leather is a very durable material, and when it comes to formal shoes, they tend to last longer because you’re easier on them and wear them less often or for shorter durations. They’re a perfect pair to keep in your closet within reach or on the shoe rack by the front door. You could even keep an emergency pair in the car if you so choose. Either way, you won’t regret having a pair the next time you need to reach for shoes to match your suit and tie. 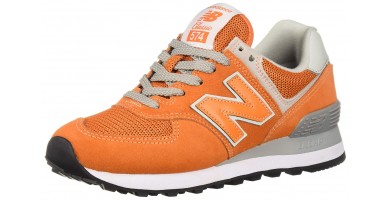 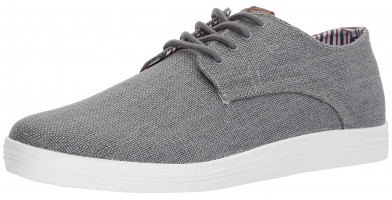 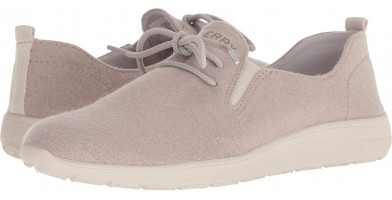