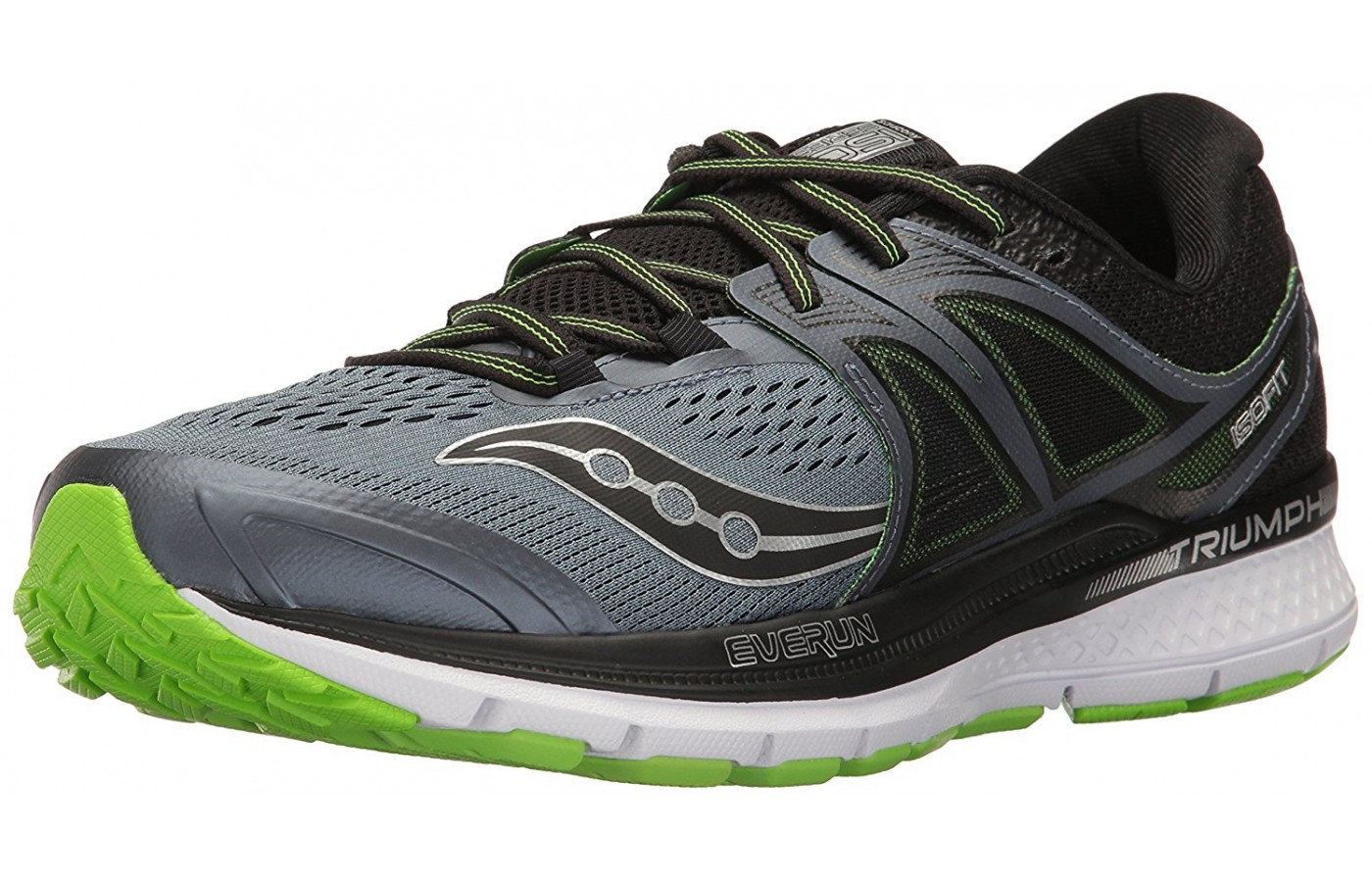 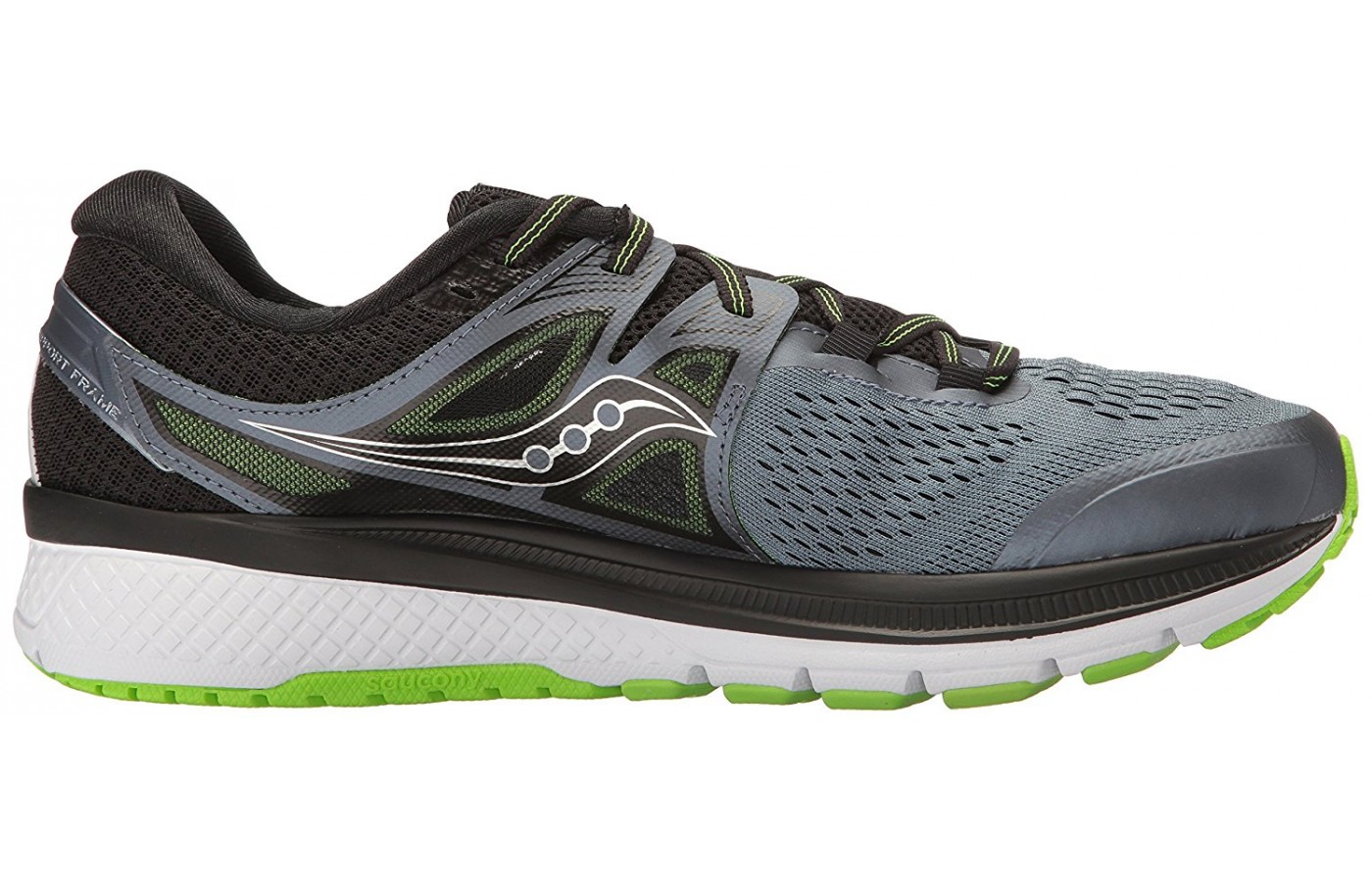 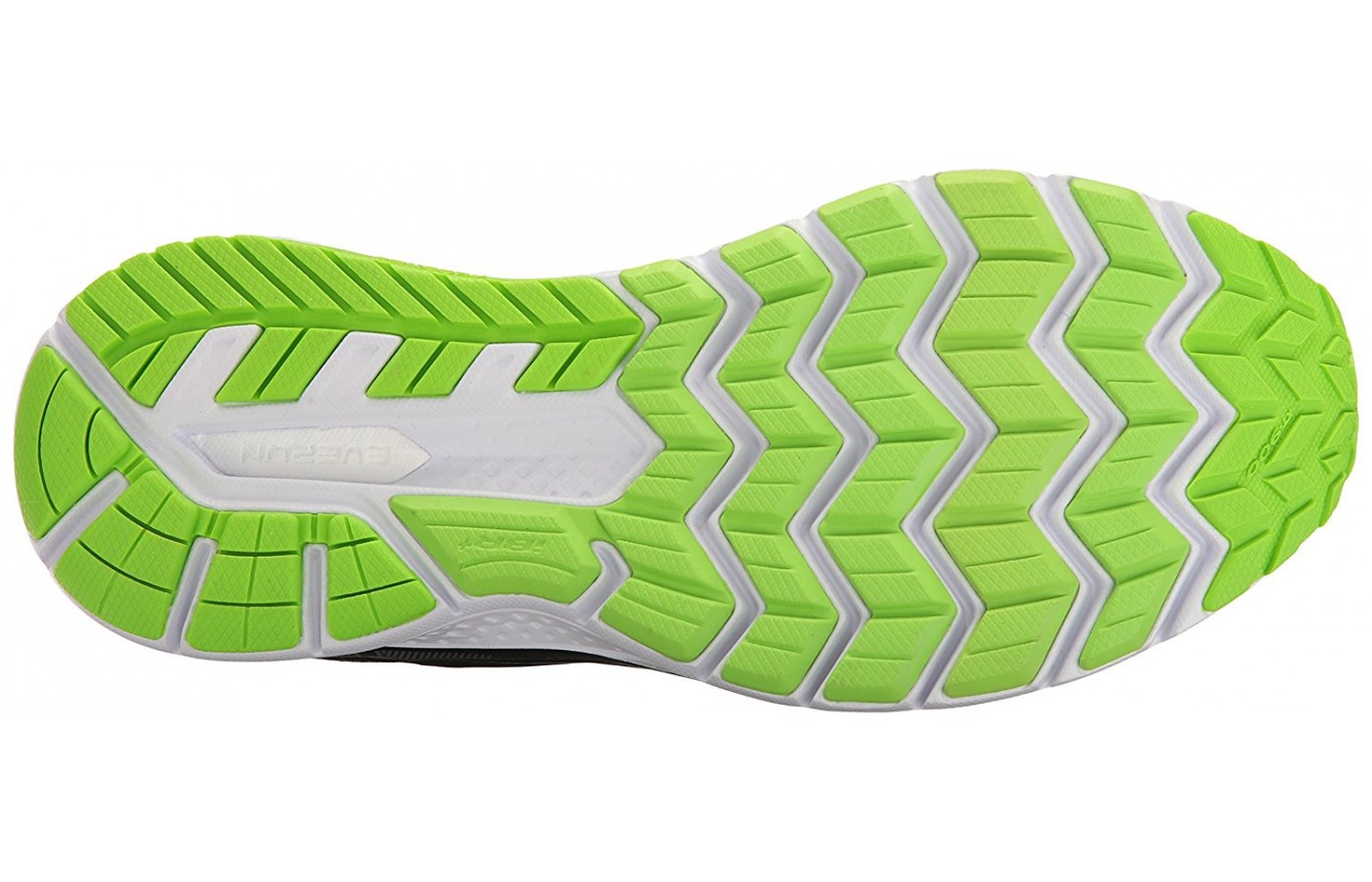 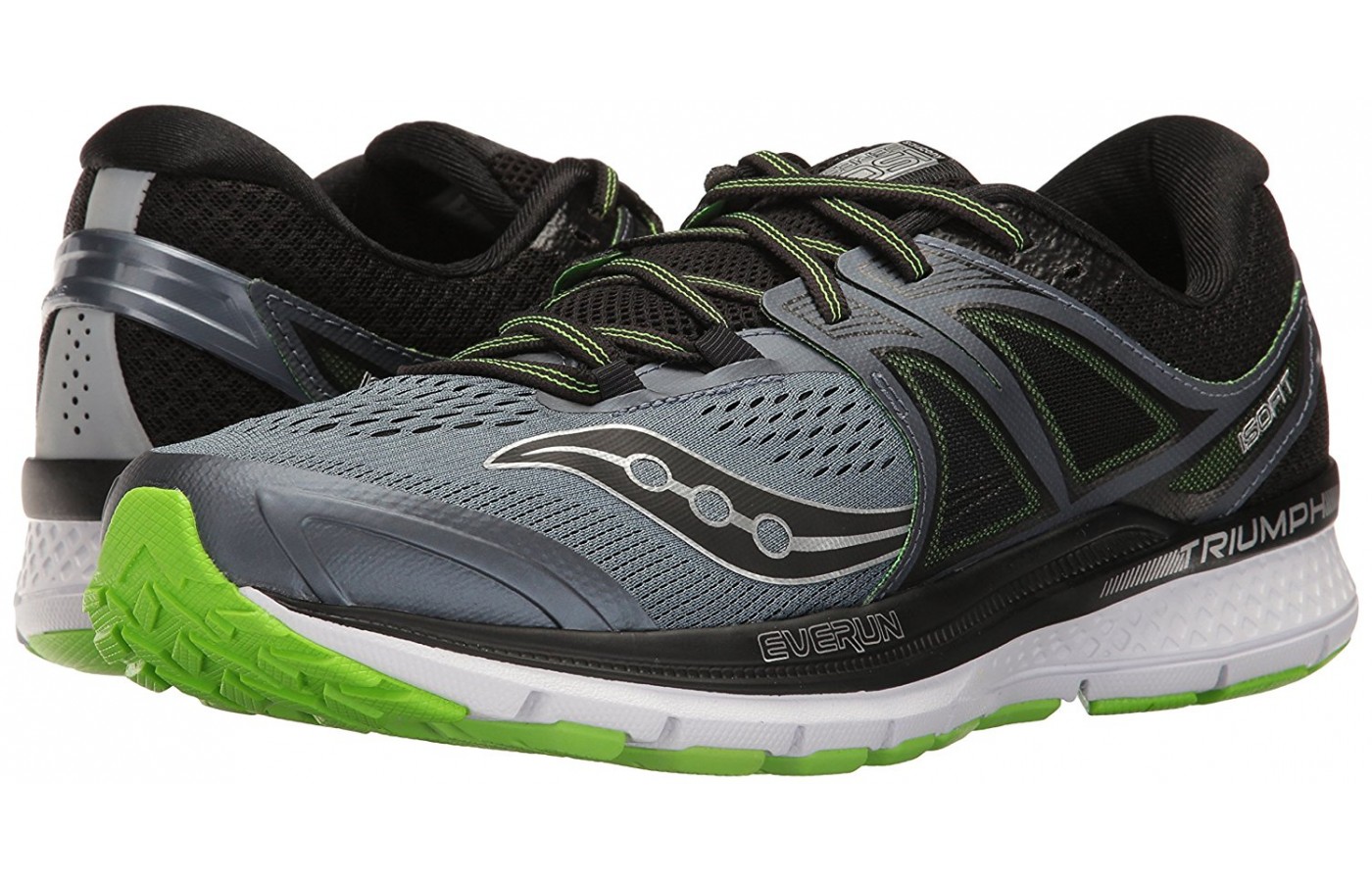 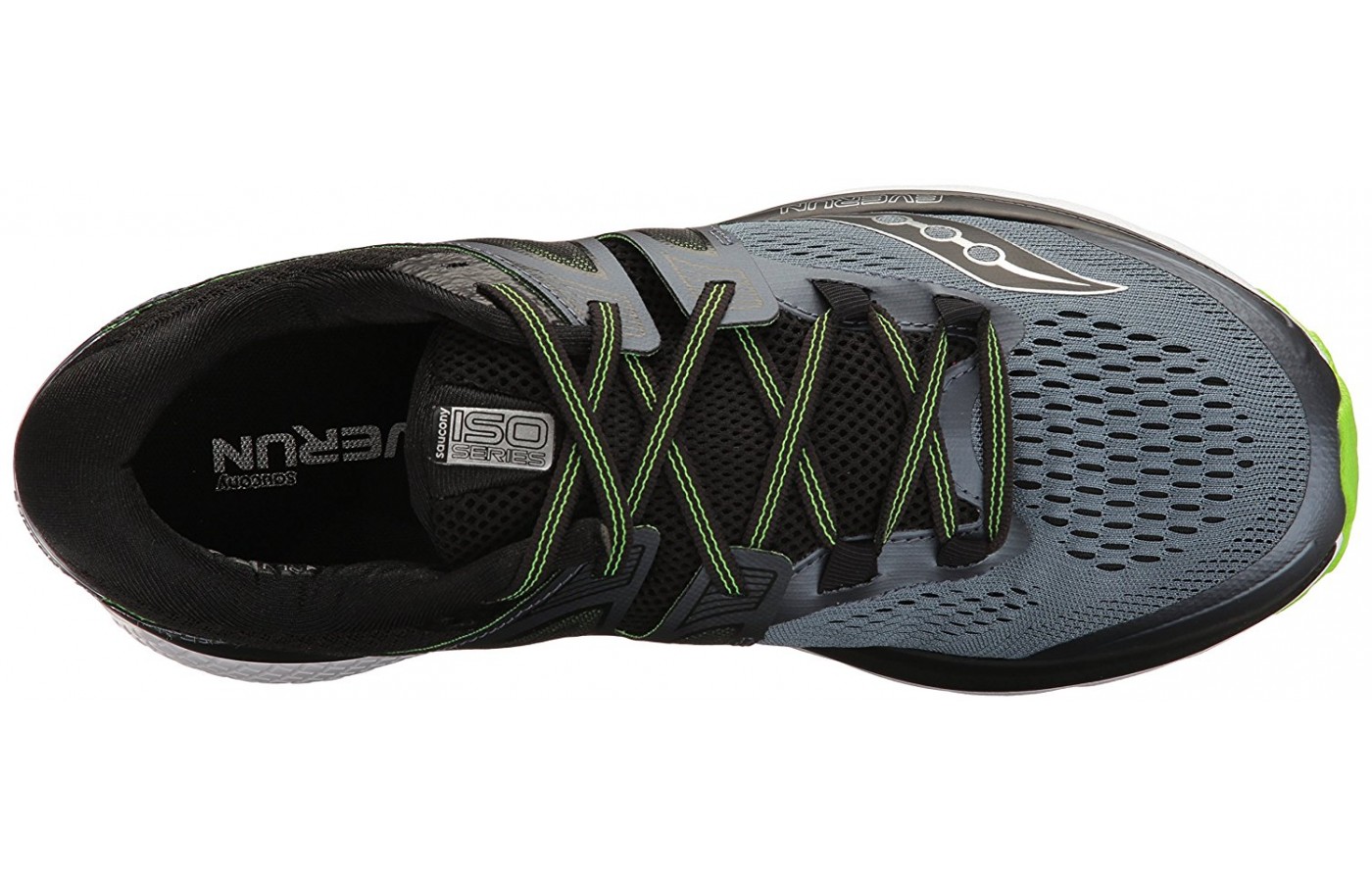 The Saucony Triumph ISO was designed with the active wearer’s foot in mind. The shoe features Saucony’s isofit upper material and several other materials in the sole of the shoe. The main technology in the sole that improves the ride of the shoe would be Saucony's addition of their everun material. The everun material allows for a smooth and firm ride while the shoe is in use. Coming from the Triumph 2, the design of this shoe hasn’t really changed much other than the improvement in the sole of the shoe.

We have spent 4.5 hours analyzing a total of 624 reviews.

The outsole of the shoe runs in line with the quality provided by the upper of the shoe. The shoe features a tri-flex outsole design which both enables the shoe to achieve a high level of flexibility and a high level of grip while the shoe is in use. The purpose of the tri-flex design is mainly to allow the shoe to bend with the wearer’s foot without taking away from the overall shape and functionality of the shoe. The material that makes up the outsole of the shoe is a hardened rubber material, the standard material for running shoes nowadays. This material also aids the shoe in achieving the gripping ability that it does, mainly because of hardened rubbers inherent strengths.

The midsole of the shoe is one that promotes both comfort and responsiveness. The shoe features a midsole fashioned from an everun material. Everun, Saucony's material, is one that allows the shoe an even greater level of support and comfort. Saucony has also decided to fit the shoe with an everun landing zone on the heel of the shoe; the purpose of the landing zone is to provide a high level of comfort for runners who land most frequently on the heel of the shoe. Another great thing about the everun material is that, due to the material’s firmness, it is able to provide a decent level of stability for the wearer as well.

The design of the shoe isn’t that of a lightweight shoe. The shoe features several materials that enable the shoe to provide a comfortable ride; the one thing about these materials is that they don’t really allow the shoe to be very lightweight. The engineered mesh of the upper of the shoe doesn’t do much for the wearer in this respect because of the fact that the material is somewhat denser than other materials. On top of this, the everun material that makes up the sole of the shoe is just as dense. This isn’t necessarily bad for the ride of the shoe buy it doesn’t really allow the wearer to achieve a high level of speed while the shoe is in use.

The design of the shoe, while it isn’t the lightest, does allow the shoe to achieve a certain level of airflow while in use. The shoe features an isofit upper that also has a decent level of cushioning throughout. The Iso fit upper is designed to allow the shoe to be form-fitting while also allowing the shoe to be relatively breathable. All in all, the wearer of the shoe shouldn’t have to worry about sweat accumulation while the shoe is in use.

In terms of comfort, the shoe does its job relatively well. The isofit upper that is present on the Triumph ISO 3 allows for the shoe to be form-fitting during use. The one thing that must be mentioned, and was mentioned earlier, is that for some, the tongue of the shoe may be a bit thin which can lead to some discomfort. The everun midsole that is on the shoe allows for a decent level of comfort during use. Everun is known for being firm and plush at the same time, an effect that wasn’t skipped in the design of this shoe. On top of that, the sole of the shoe allows for a high level of flex, enabling the shoe to move with the movements of the user’s foot; the firmness of the material coupled with the flexibility also adds to the comforting effect achieved by the shoe.

The style of the Triumph ISO 3 is one that blends in with that of today’s shoes very well. The shoe comes in a variety of colorways, each enabling the shoe to be able to be paired with a variety of clothing. The slim cut of the shoe also allows the shoe to be worn with the sleeker clothing items such as joggers, and the like with relative ease. This feature of the shoe means that it is overall extremely versatile in its overall uses. The upper of the shoe has an aesthetic appeal to it, something that most shoes in this category simply don’t.

In terms of durability, the Triumph Iso 3 have a decent level of it. The shoe is made from long-lasting materials that enable the shoe to be able to be worn for extended periods of time. The everun material that makes up the sole of the shoe is notorious for having great rebounding capabilities, implying that the material will stand the tests of time rather well. The hardened rubber flex sole, as most hardened rubber soles are nowadays, is very durable by itself. The make of the sole unit itself enables the shoe to be worn for well over 300 miles with limited to no difficulty.

The shoe doesn’t feature a plethora of protective features, but the ones that it does have do well over enough. The material that makes up the sole of the shoe is relatively thick enabling the shoe to be worn in the harsher areas without worry. And the upper, being made out of engineered mesh, is relatively dense, also protecting the wearer’s foot from the entry of unwanted items. The most outstanding feature in this regard is the heel area where the landing zone is present. This area of the shoe enables the shoe to provide a high level of protection for the heel area, which is a major plus for those who land on this part of their foot.

The everun midsole of the shoe enables the wearer to be able to achieve a high overall level of comfort and a smooth ride while the shoe is in use. Everun, being a firm material is known for being able to absorb the shocks encountered during use, and redirecting them. This results in an above average ride, one that is only made better by the landing zone on the heel and the boost that it gives to the wearer. The outsole of the shoe also aids in this effect by allowing the wearer to pick and choose their spots and maintain decent footing at all times.

The Triumph ISO 3 also has amazing terrain handling capabilities. The sole of the shoe, being fashioned from a hardened rubber material allows the shoe to be able to be worn on a variety of terrains with little to no issues. The sole of the shoe and it’s flexing ability allows the shoe to provide the wearer with a level of footing that both protects and guides the wearer’s foot while the shoe is in use. One thing about this is that the material doesn’t do a very good job of providing the wearer with ample footing on the moister surfaces. This is to say that the shoe isn’t the best for those who are looking for a shoe to wear when it is raining outside or right after a rain. Also, the upper of the shoe isn’t really designed for the more extraneous surfaces such as trails. This being said, the shoe can be worn on level surfaces such as tracks, treadmills etc.

The Triumph ISO 3 is also on the pricier side. Considering the technologies placed inside of the shoe, it makes sense for Saucony to make the shoe a bit higher priced than others. This being said, the shoe provides the wearer with a high level of durability and will last for a relatively long time. The wearer will get their value out of the shoe if they were to purchase this model, solely from the length of time that they will be able to wear them.

The flex sole that is present on the Triumph ISO 3 is one of the reasons why the shoe is able to achieve such a high level of grip for the wearer. The shoe features a sole that is designed in such a way as to allow the shoe to bend to the movements of the wearer’s foot. The malleability of its design coupled with the traction gaining capabilities of the material that it is fashioned out of allows the material to grip the ground with a high level of ferocity. That isn’t to say that the material should be expected to perform extraordinarily well on wet surfaces though; expect the material to be able to achieve a level of grip about the same as any other shoe in that sort of environment.

The everun material in the sole of the shoe provides a stable ride overall. Everun is known for being a plush material while also being firm enough to provide a decent platform to run in. The grip that the shoe provides also works to this effect, allowing the shoe to get decent footing while in use. The use of plastic covering on the upper also provides a level of security for the users’ foot further allowing the shoe to achieve a stable overall feel. 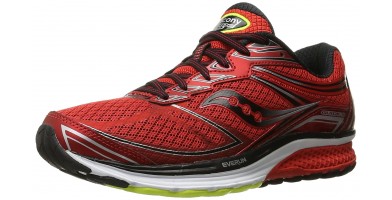 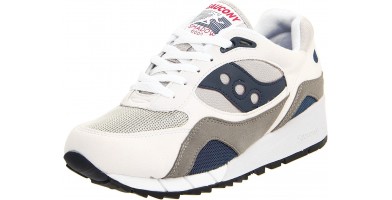 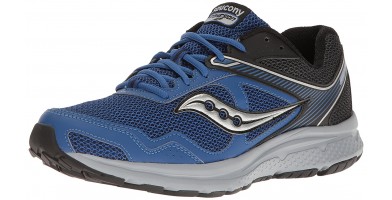