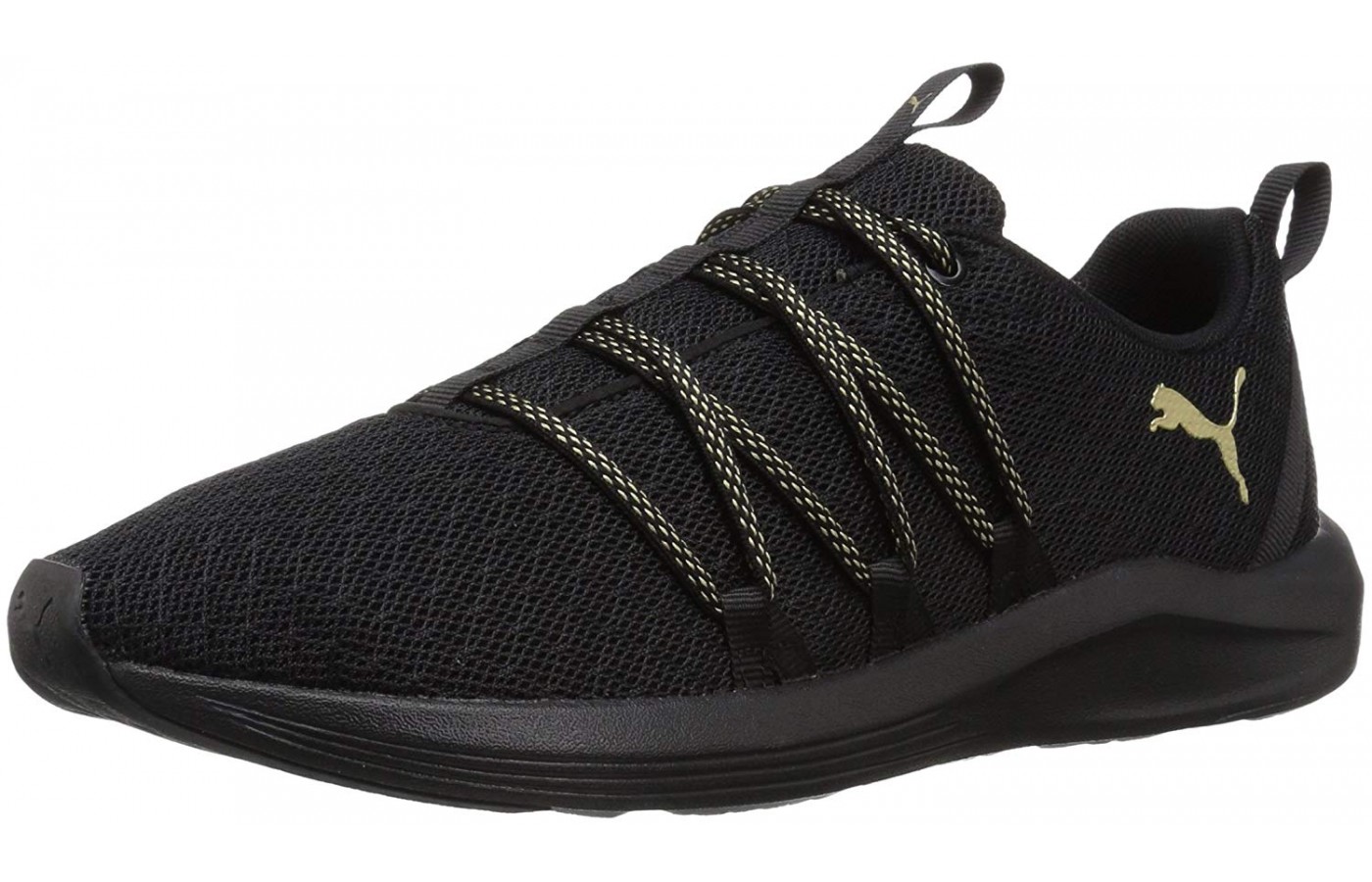 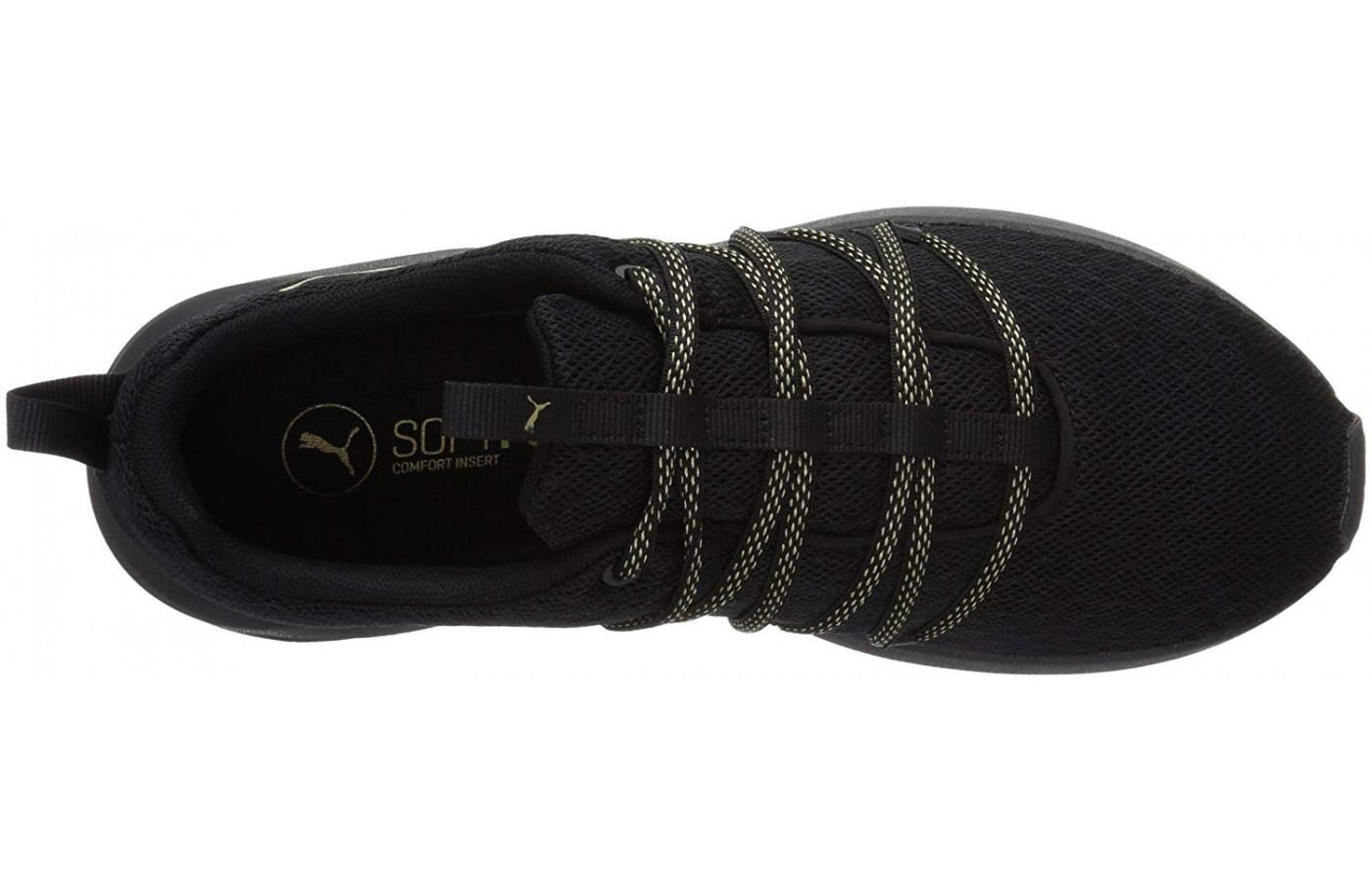 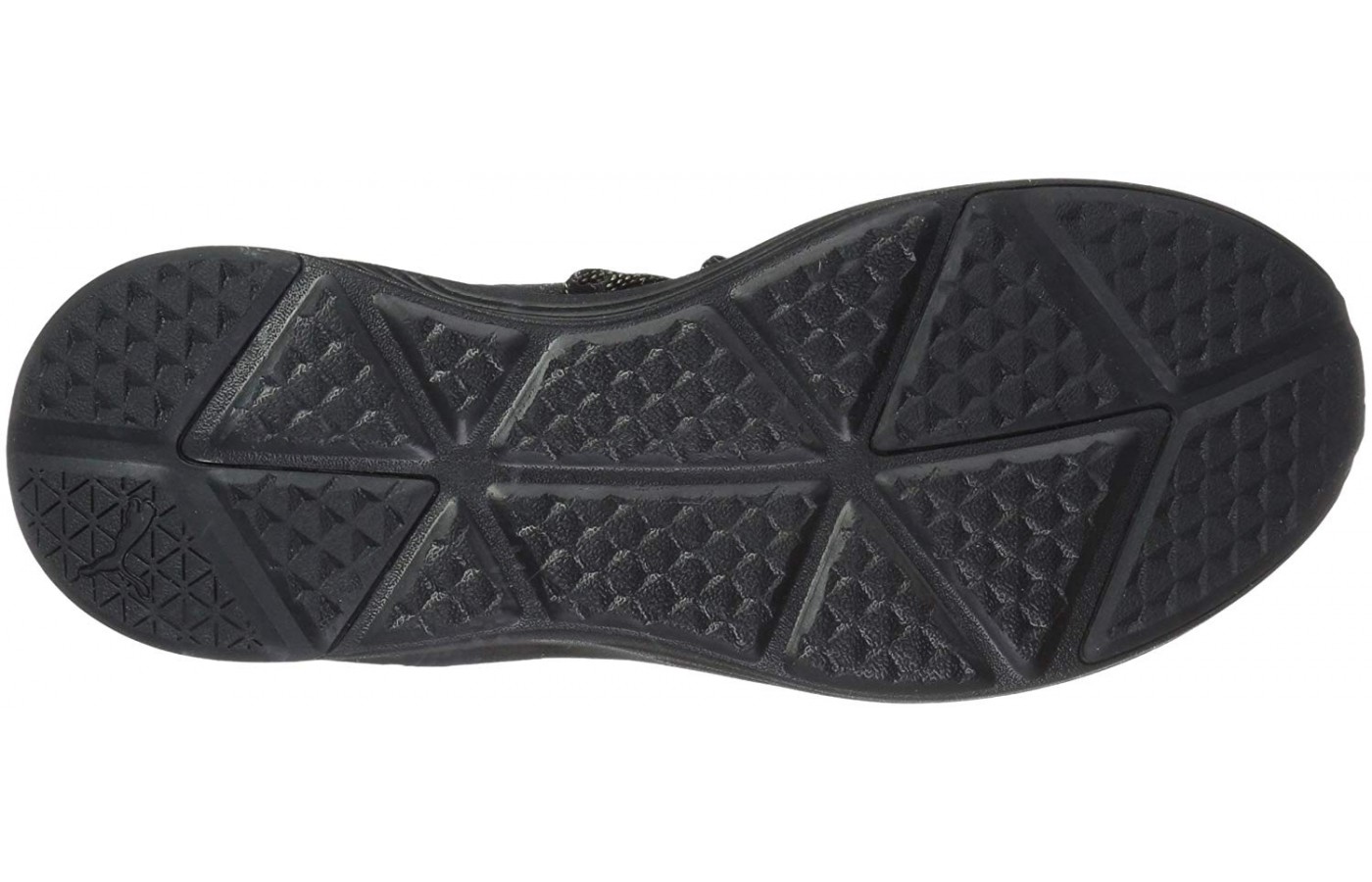 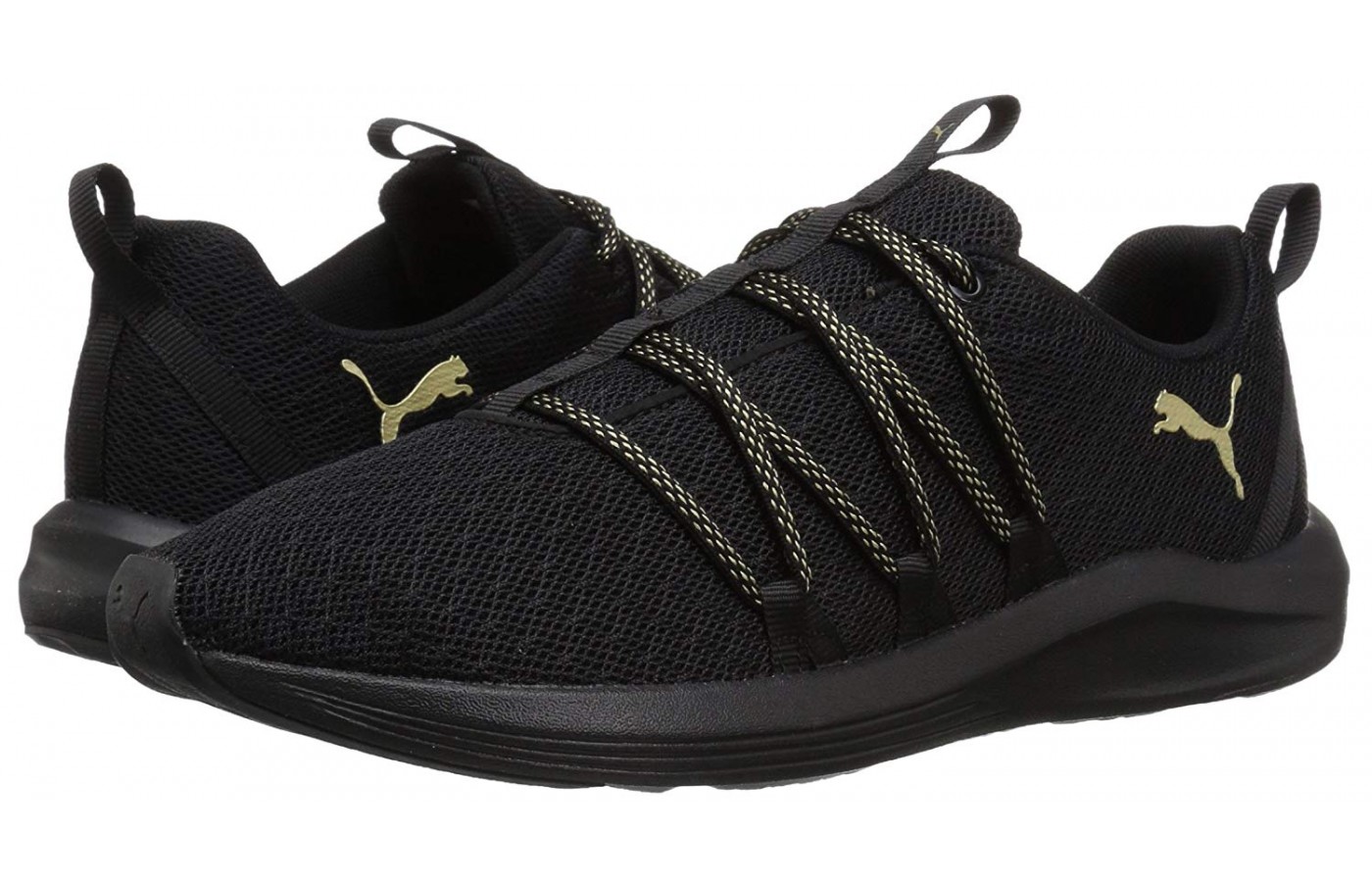 Puma wants you to go faster. Their mascot is appropriately a Puma, which is a type of panther that prowls both day and night. In this Prowl, the time won’t stop you from strutting your stuff either. The personalized fit and slim design are perfect for someone who wants a shoe that is simple but high-performance. A complex lacing pattern will ensure the fit is just right, and cushioned elements throughout the shoe will make you feel right as well. A textured knitted upper is only this Puma’s first amazing feature reveal because when you look closer at the shoe, you’ll find even more reasons to want to bring it home with you.

The dynamic lacing across the top of the foot here stems from the lower sides of the upper. You may wonder what the benefit is for having a shoe that has a lacing system that completely wraps around the body of the shoe itself. What a system like this provides is unparalleled comfort and security when wearing the shoe. What might become a bit tricky is the fact that the Prowl isn’t entirely true to size. Though its features allow for a great fit with the correct sizing and alignment, the first step is to figure out what exactly is the size you need. Once you’ve figured that out though, the Puma Prowl holds the foot exactly where it needs to be, allowing for room and adjustment where you need it, and a close fit where you don’t. To keep the soft and padded tongue close when wearing, these have a midfoot lockdown lace. For a trainer that feels like a slipper or sock, but performs as well as any other athletic shoe, the Prowl should definitely be taken into consideration.

Mesh uppers work really well to make a shoe very flexible. Flexibility improves function in trainers, not constricting your movements or hindering any routines. Softfoam+ is worked into the upper itself, so the whole shoe is incredibly cushioned and supportive, but without heavy bulk and relatively no restriction. The Prowl would make an outstanding gym shoe for someone boxing or doing short high-intensity routines. For the outsole, the shoe is sectioned off into 14 parts. The majority of these are triangular, fanning out from the midpoints of the shoe. This allows for movement without wearing down on any part of the sole in particular. Trapezoidal pieces come together on the arch to lift and separate that section from the parts of the foot more in motion.

EVA is used to create this midsole, specifically IMEVA. EVA is a decided favorite among trainers for its durability and barely-there weight. Injection molding reduces waste quite a bit compared to other molding techniques, such as compression. The Prowl’s midsole is made by injecting EVA, a foam blend, into a mold that is much smaller than the final product. Once it is taken out of the mold it bounces to full size, a testament to the resistance and strength of this material. Once it cools, the EVA will settle into its desired size and shape. The benefits of using EVA for a sneaker midsole are plenty. The Prowl has a nice feel with each step, as the shoe eases the impact with the ground and absorbs shock. It is also firm enough to provide an actual contour for your foot to rest without being depressed from the weight.

Pumas can tend to be higher in price when they are still being sold directly from the manufacturer. When an athletic shoe like the Prowl is first released, it is generally at a number that can be a little out of the price range of the average person, and somewhat intimidating. Though the Prowl isn’t priced unreasonably, it does pretty much only come available slightly under its retail value. This sneaker is still affordable and which means its a pretty awesome value for those who need a sneaker that performs but are unable to spend an arm and a leg for footwear. The features of this shoe are many, there won’t be any dealing with bare bones, uncomfortable, cheap shoes, despite the lowered cost.

Shoes that are light and streamlined do something really wonderful for a runner, or any mobile athlete’s, performance. Energy expenditure goes way down when the wearer is confronted with a heavy, bulky shoe. It doesn’t help any athlete to sacrifice a lightweight shoe in order to be a little faster though, and this Puma Prowl doesn’t fall victim to that. The shoe itself has effective support, all-over padding, and also happens to be incredibly light wear that looks fashionable as well. These qualities aren’t exclusive to each other in a trainer, and it is always great to catch them coming all together like that.

Due to the extremely close and comfortable fit of the Puma Prowl, it creates a nice level of foot stability. Stability from the bottom up straightens your posture, helps to ease muscle pain, and takes so much pressure off your arch. The way the Prowl is constructed, it is in close contact with every part of the foot, and the whole upper is padded to keep you straight in your shoe. This doesn’t create a stiff support shoe, especially in terms of your ankle, though. If you are looking for something that properly holds your ankles or arches in place, this option might be much too soft. While breaking in a shoe can often be necessary to wear during a workout right off the bat, these are supple and good to go immediately, but it really does forfeit heavy stability in the actual bones of the Prowl, so to speak.

This Puma’s style of lacing is actually an extremely sought after addition to many of our favorite brand’s newer runner or trainer lines. On the outer heel, a gold Puma leaps forward towards the toe of the shoe, all set on a rich burgundy backdrop. Tabs on both the tongue and heel make this easy to wear, but don’t look corny, as that is a style you don’t see nearly as frequently on athletic sneakers these days. Durable mesh on the upper wraps around the shoe into an almond-shaped toe. The outsole on some colors has a speckled pattern, which is an exciting mode of updating a shoe that often gets overlooked. It’s so simple to use different colors or textures in the outsoles, and we’re in a time where we see more and more innovation in how shoes like this Puma are designed, with sharp palettes and color schemes in mind.

Flexible soles are great, but flexibility doesn’t do much good when there is no traction. These have awesome rubber traction with deep grooves that keep close to the ground with every step. A slight lip at the toe of this Puma Prowl means you won’t slip while pivoting or coming back up to a standing position when at the gym doing yoga or lunges. The Prowl is quite literally designed to keep its wearer on their toes, but it does that in one of the most elegant ways possible. Due to its materials, the outsole is also non-marking, so if you’re working out at home, or even in a home gym, you won’t have to worry about excess scuffs or skids.

This upper is just cool. From metallic accents to the dramatic lacing, this has that streamlined, clearly functional look, which individuality. You want to feel like you have a unique style whether you’re fitness-oriented or fashion-oriented. The silhouette of these is memorable. There is no bulk on the Prowl that prevents it from having a nice clean profile. One way the Prowl is able to accomplish this is by putting Softfoam+ in the sock liner as well as the insole, so what you can’t see is all the additional padding and support within the shoe, as it is built into the construction itself. The result on the Prowl is this striking dark upper with shimmering metallic logos and a high-functioning body and sole, with the look of a sharp casual shoe.

When you put together EVA midsoles, cut for traction outsoles, and built-in cushioning, the overall make up of this shoe is quite light. While we mentioned it can increase speed due to lessening the energy expended to make muscle movements while wearing, the Prowl just feels really easy to wear and comfortable. The mesh upper is nearly weightless with how it hugs the foot. There is a lot of sock-like shoes, but the Puma Prowl apparently feels like you’re nearly barefoot. Reviewers raved about the lightweight comfort of these adorable trainers, calling them their new favorite shoe and exclaiming that they were buying multiple pairs. Almost every review I found was overwhelmingly positive, a rarity these days, and that was namely attributed to its padding and weight.

This Puma Prowl managed to gain very few complaints and so many raves, it is hard to say any reason why it wouldn’t be a top choice for your next new trainer. Though it seems to run a half-size small, every other part of this sneaker gets it nearly completely right. Athletes and those with a sporty style who favor really effortless wardrobe additions will adore the Prowl. The only exclusion I can think of are people looking for extreme ankle support, like that you can get in high-tops or those that aren’t able to invest in a sneaker for multiple seasons at one time. Intuitive and creative lacing and upper design make you double-take when you see these cute runners. 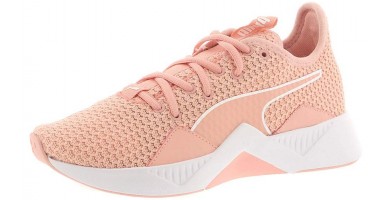 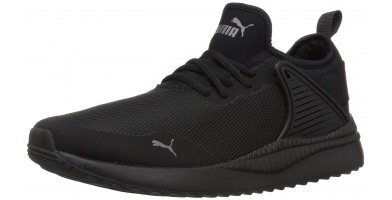 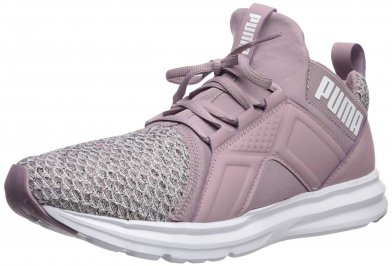