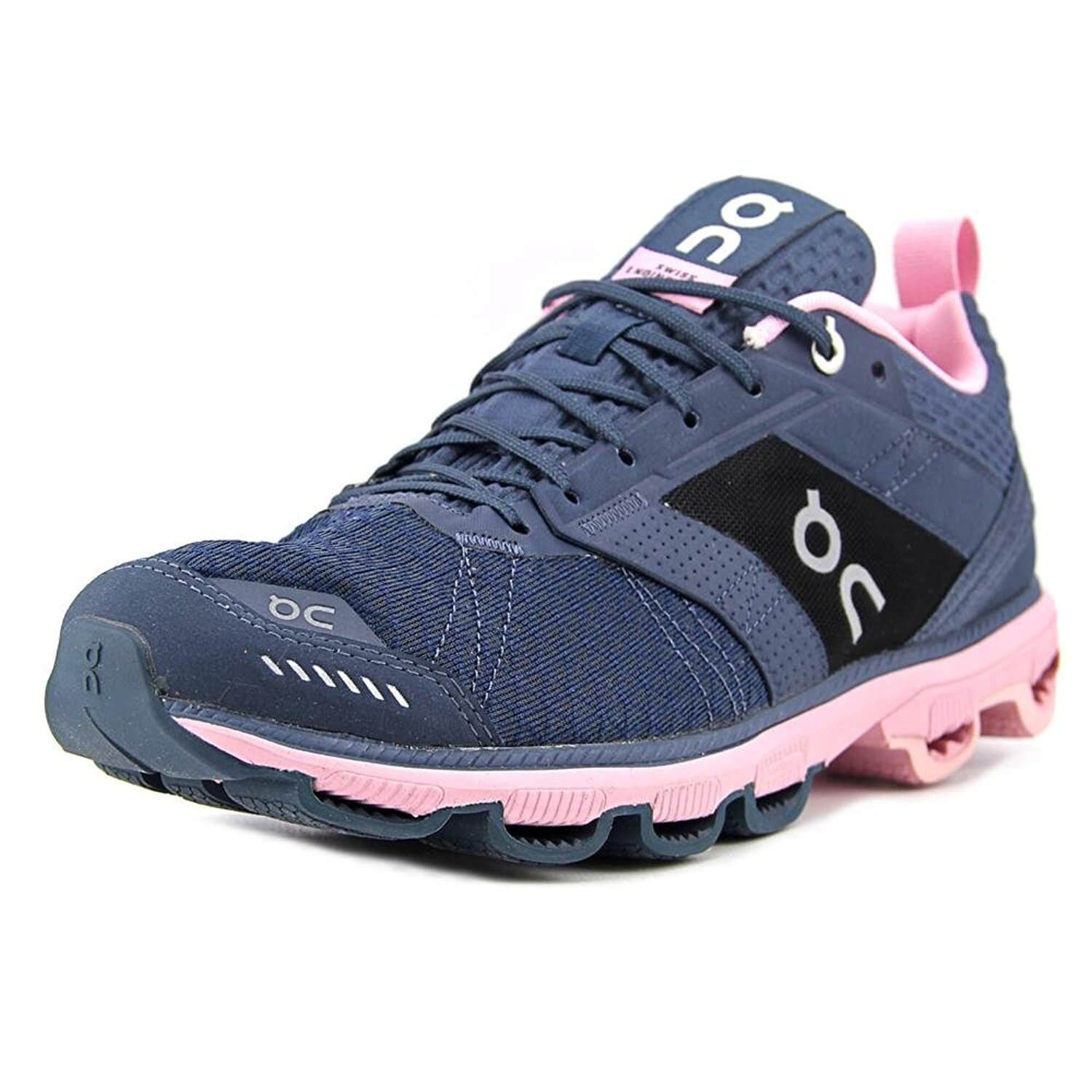 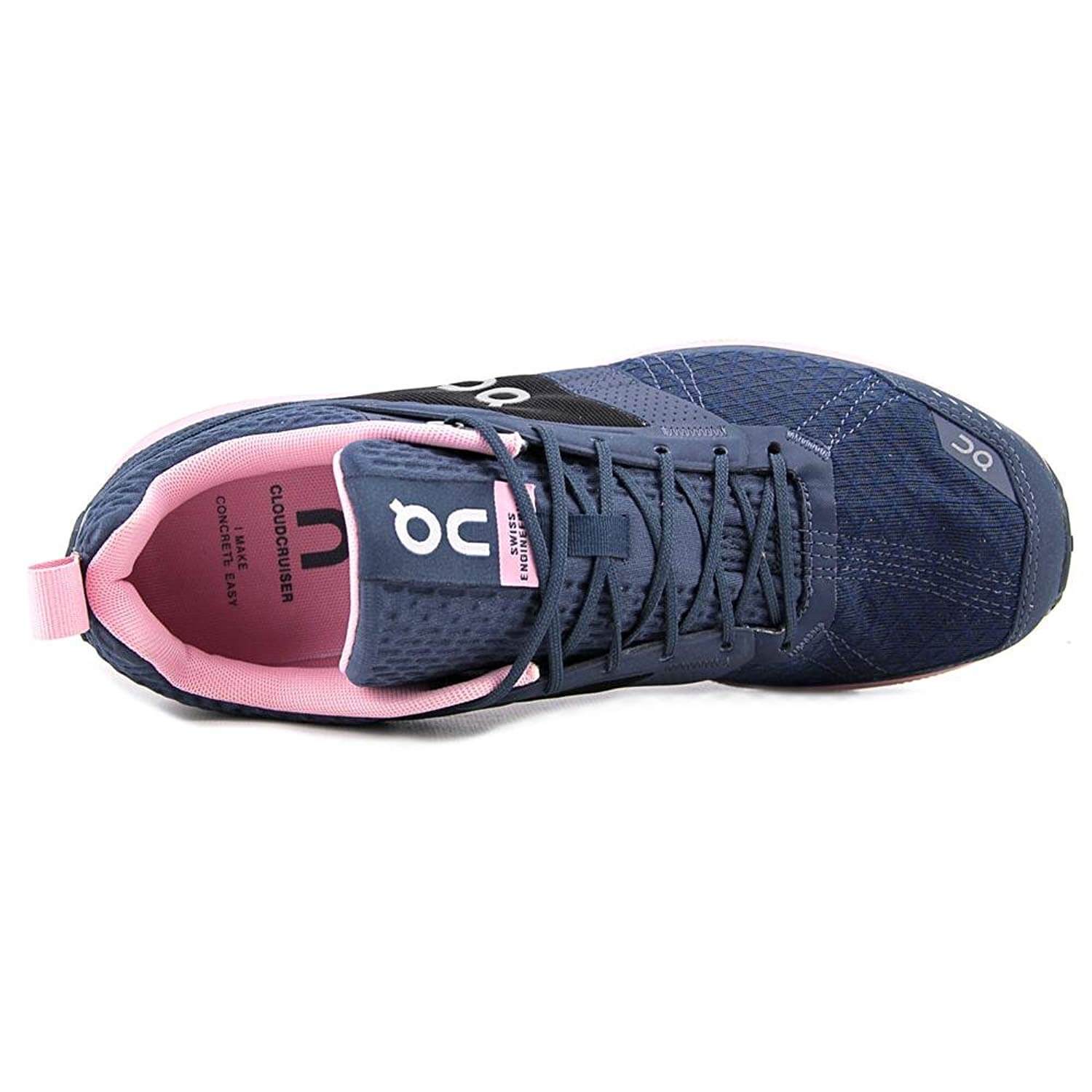 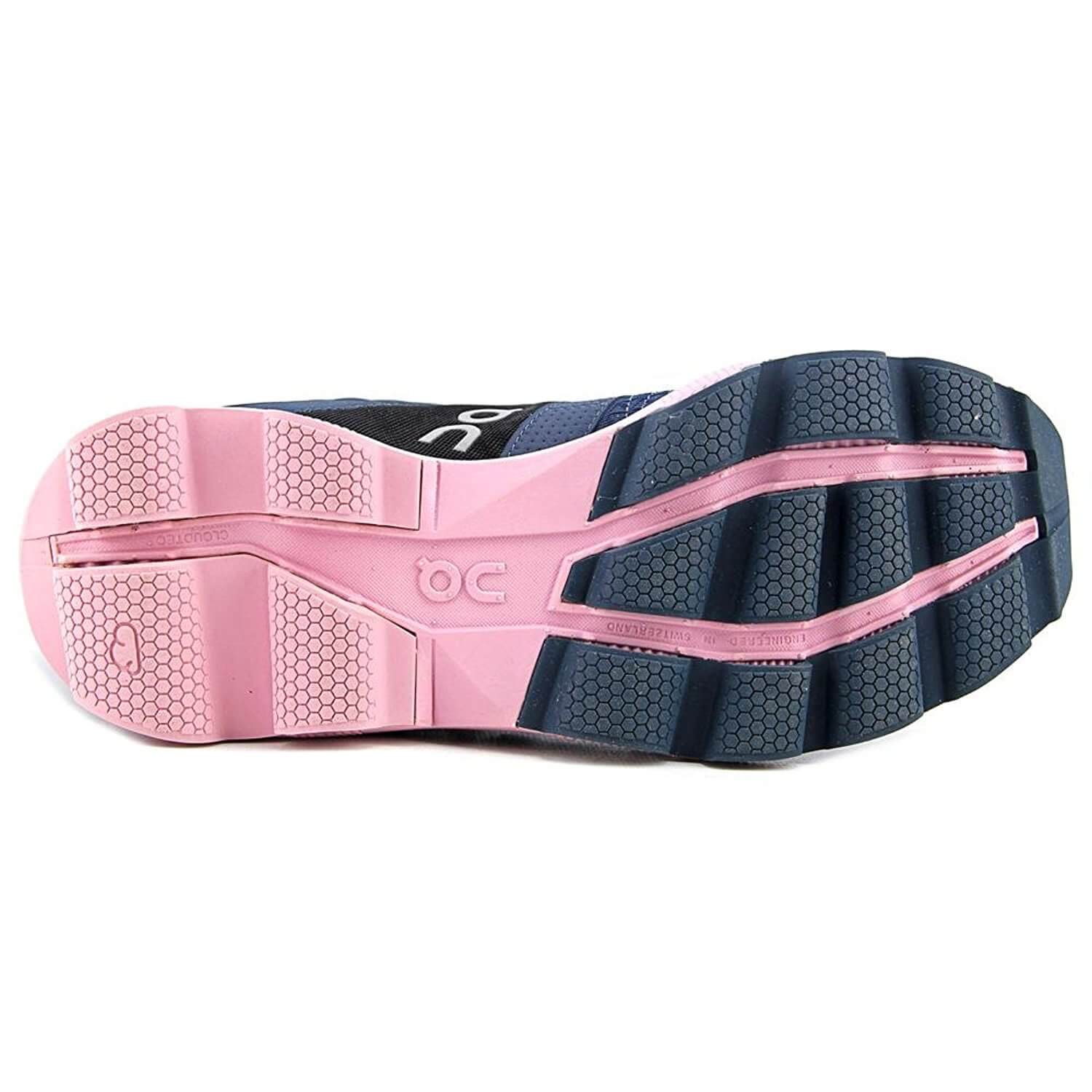 If you’re seeking a shoe that’s bound to provide you with both a comfortable and natural feeling experience, it’s probably best that you take a peek at the On Cloudflyer. The Cloudflyer is a shoe that was produced for just those reasons suggested in the previous section. It has a unique design meant to provide adequate comfort while being stable enough to be worn on varying types of surfaces without causing the wearer any type of bodily harm. The shoe also has something that not many shoes have seen before it, Cloud Cushioning. On is known for being innovative enough to give their shoes a design that can handle virtually any type of body type (within reason) placed inside of their shoes. Their Cloud tech is meant to transfer energy and blend directly in with the type of runner that you are.

One thing is for certain, the outsole on this shoe is something that not many have seen before. It’s sectioned off into chunks and literally leaves the Cloud foam in the shoe exposed to the terrain. With that being said, the shoe was made this way for a very good reason, to provide maximum flexibility and grip to its wearer. While the shoe does leave the foam exposed the more important areas of the shoe are meant to provide the wearer with adequate grip while the shoe is in use. They are designed from rubber pads and have been placed throughout both the forefoot and heel sections of the shoe.

The Cloudflyer wasn’t given this name for no reason. The design of the shoe incorporates Cloud Foam technology; a technology meant to increase the level of cushioning that the wearer gains from their experience in the shoe. On decided to do something a bit different with the design of the midsole on this shoe in that they gave it a curved look. This allows the shoe to provide the wearer with more support than that which is typically received from a shoe of its nature. The added support (which will be discussed more in depth later) allows this shoe to be worn for longer periods without causing any worry as to the feel of the shoe as the wearer is running.

The upper of the Cloudflyer is designed to, much like the sole unit, provide maximal comfort to the various sections of the wearer’s foot. Things such as the No-sew design of the shoe are meant to increase the comfort felt well as airflow. The lacing in the shoe is title Start Lacing which works to secure the foot for the high-speed runs that are likely to take place while in the shoe. In addition to this, the shoe incorporates reflective material which enable the wearer to have visibility when in dimly-lit areas. The Clouflyer makes use of Star lacing; which is nothing too special, they’re just relatively thin and make tying (and keeping laces tied) a simple(r) task. The upper is designed using a sock-liner material as well, which basically gives it a bit of added comfort when in use.

Another interesting quirk about the Cloudflyer’s design is that it is also relatively lightweight. Seriously, this shoe has a “puffed” up design but still manages to weigh roughly 10oz for a men’s size 9.5; that’s a very rare thing to see nowadays. This can be attributed to the shoe’s use of the Cloudfoam in the midsole and the sectioning in the outsole. While the midsole and outsole regions of the shoe do have a “bulky” look to them, they don’t add much weight to the shoe. For this very reason, the shoe will work rather well for any individual seeking a fast-paced workout.

You’d have to expect that a shoe with the title “Cloudflyer” will provide adequate airflow to any individual wearing it. The upper of the Cloudflyer is designed from a thin mesh material which allows it to maintain consistent air circulation while the shoe is in use. This comes in handy during hotter weather when it becomes likely that uppers begin to fail and feet become hot. The upper on this shoe and the mesh used will make sure that your feet are in a comfortable and cool position when worn. With the Cloudflyer, one doesn’t have to worry about sweat being accumulated and one not having the comfort that they’d need in order to fully enjoy their shoe.

The midsole of this shoe is designed with the idea in mind that the shoe will provide adequate comfort to all parts of the wearer’s foot. The shoe comes equipped with 12 clouds Zero Gravity foam, a material known for the cushioned yet firm feeling that it provides to wearers when in use. The pods (as is mentioned later on in this review) move freely with the movements of the wearer’s foot which reduces the feel of the actual shoe when it’s on foot. The upper of the shoe is also seamless, making it a simple thing for it to provide adequate comfort and to reduce chafing on any individuals foot.

The look of the Cloudflyer is one that appears to be very, advanced. It has a design incorporating various technological improvements, thus giving it an improved overall look compared to its competitors. Another good thing about the design of this shoe is that it comes in base colors which allows it to blend incredibly easily with all clothing that individuals could possibly pair it with. It becomes a very simple thing to wear these shoes outside of the typical athletic environment and pair them with casual clothing types. This is one of the very things that contributes to the shoe’s value, it’s versatility.

With swiss technology comes swiss quality. On is known for designing high-quality shoes that are meant to last for a relatively long time. When the materials that the shoes are made of are considered, it makes complete sense why On shoes are known for being so durable. For starters, the blown rubber in the outsole works wonders for allowing the shoe to wear evenly. While it will doesn’t help the shoe provide the best traction (more on that later), it will definitely stand up against the ground that it’s worn on. The upper is no-sew which basically means that the wearer doesn’t have to worry about any seams coming out of place during their time with the shoe either.

Well, that padding on both the sock-liner in the upper and the sole unit are meant to provide actual protection to the foot. The cushioning, or Cloudfoam, is meant to keep the wearer’s foot protected from the terrain that it’s run on with and keep other materials out of the shoe’s design; this it does very well. The liner can’t really keep materials out but the fact that it keeps the foot from chafing and experiencing overall discomfort is something that should be mentioned.

Well, if it isn’t known for anything, it should be known for the responsiveness that it introduces to the wearer’s foot. The midsole of the shoe is actually where most of its responsiveness comes from. The use of the “air pockets” in the shoe’s design allows it to easily transfer energy back into the wearer’s stride, which results in overall smoother rides while in the shoe. The upper is also built in a rather thin fashion and is meant to provide ease of movement while in use.

The support of the shoe stems from the design of the midsole as well. The use of the foam in the shoe’s design enables it to provide adequate comfort and support for those neutral runners on the market. The way that the pods in the sole unit are set up and the feeling that they provide allows these shoes to work relatively well for many different foot types; from slender to wide feet, this shoe will ensure that the wearer feels totally supported.

These shoes work like a charm when used in either gyms or on roads. The rubber pods on the sole unit make sure that they wear evenly and provide the wearer with the control that they’d need on the terrain of their choice. The design of the upper is versatile enough to be transferable to different terrain types quite easily as well. The shoe can handle relatively well on both terrain types.

One thing is for certain, these shoes are not cheap. The price point that they have is so simply because of the technology and quality incorporated into their design. It isn’t every day that one finds a shoe that will provide the comfort and responsiveness that one receives from the Cloudflyer. With that being said, if one were to purchase this model of the shoe, they would definitely be able to receive what they need in terms of value.

One area that the shoe may not function the greatest (in all areas) in is the Cloudflyer’s sole unit. The outsole of the shoe is designed using blown rubber pods, which works well on roads and gym surfaces; not so much on wet terrains though. The nature of the Blown rubber is that of a less-abrasive material which basically means that it isn’t known for achieving the highest level of grip possible. That isn’t to say that these aren’t good shoes, rather that one should be wary if they need something that they can wear in wet climates.

One of the great things about the placement of the materials in this shoe is that they make the design one that is incredibly flexible. Seriously, this shoe moves easily to the rhythm of the wearer’s foot without much trouble. The clouds in the sole unit are all sectioned off and allow the wearer to completely achieve what they’d need in order to move freely while in their shoes. There is a lateral slash running the length of the shoe that greatly increases not only the comfort achieved but the type of movements that the wearer can partake in.

One thing that runners everywhere have awed about in the design of the Cloudflyer is that it manages to cushion one’s ride while still allowing for a decent level of both stability and security while the shoe is being used. Consider the design of the outsole for starters, while it is sectioned off, the denseness of both the rubber pods and the sections of cloud foam, allow the shoe to be rather rigid when they need to be. The fact that these sections run the entire length of the shoe gives it a bit of security and also introduces the wearer to a bit of support as well.

The drop on the Cloudflyer is slightly below that experienced by other types of shoes. This shoe features a drop of approx. 7mm which allows it to provide wearers with what they need in terms of transitions and increases the likelihood that one will enjoy a natural feel while the shoe is being worn.

For those who appreciate innovation and would like to try something new, the Cloufyer may be the shoe for you. It has a firm, yet cushioned feel that transfers to various different types of runners. This is a shoe that’s meant to provide runners with what they need in terms of both comfort as well as durability. The Cloudtech found in this shoe is something that is native to the brand On themselves and has been in development for several years. This would explain the price and the quality that they've placed in to actually creating the shoes themselves. With that being said, these are wonderful shoes and should be considered by any individual seeking pair of comfortable, quality running shoes. 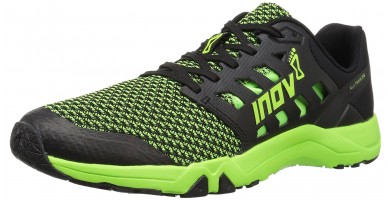 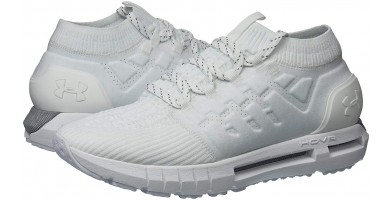 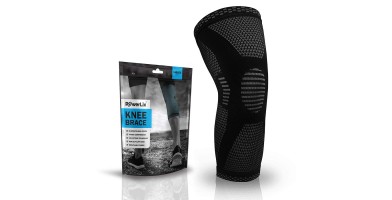