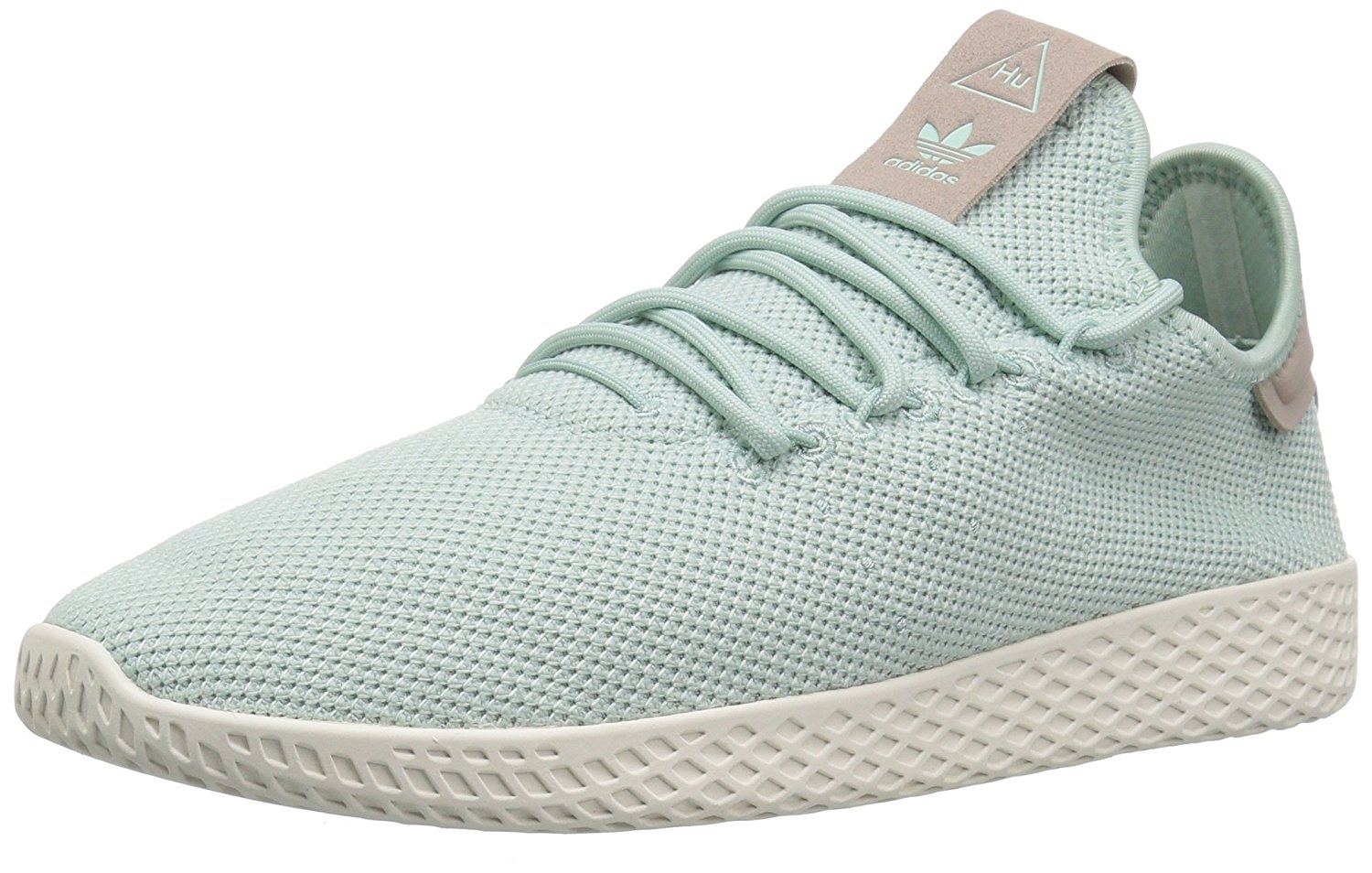 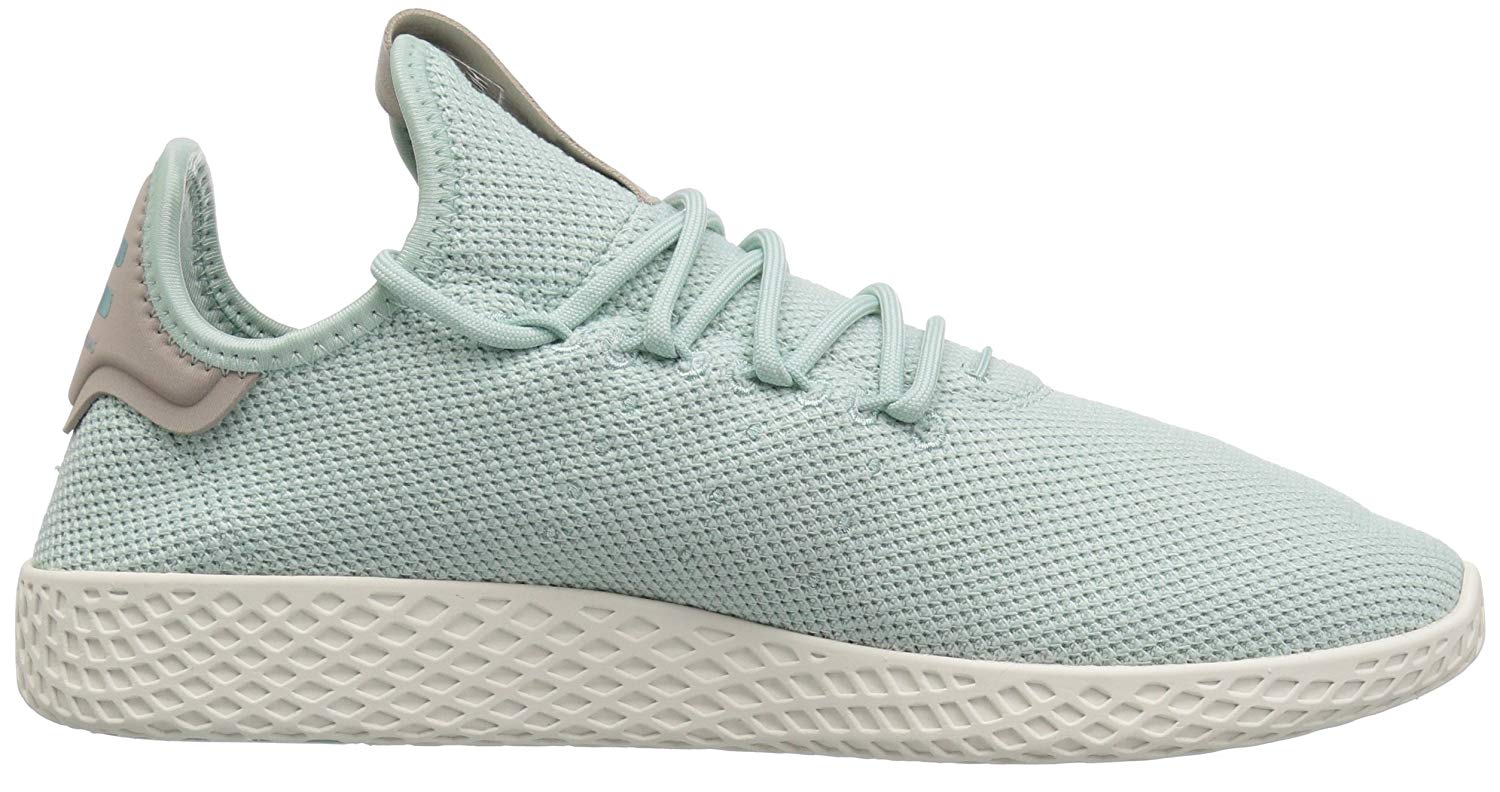 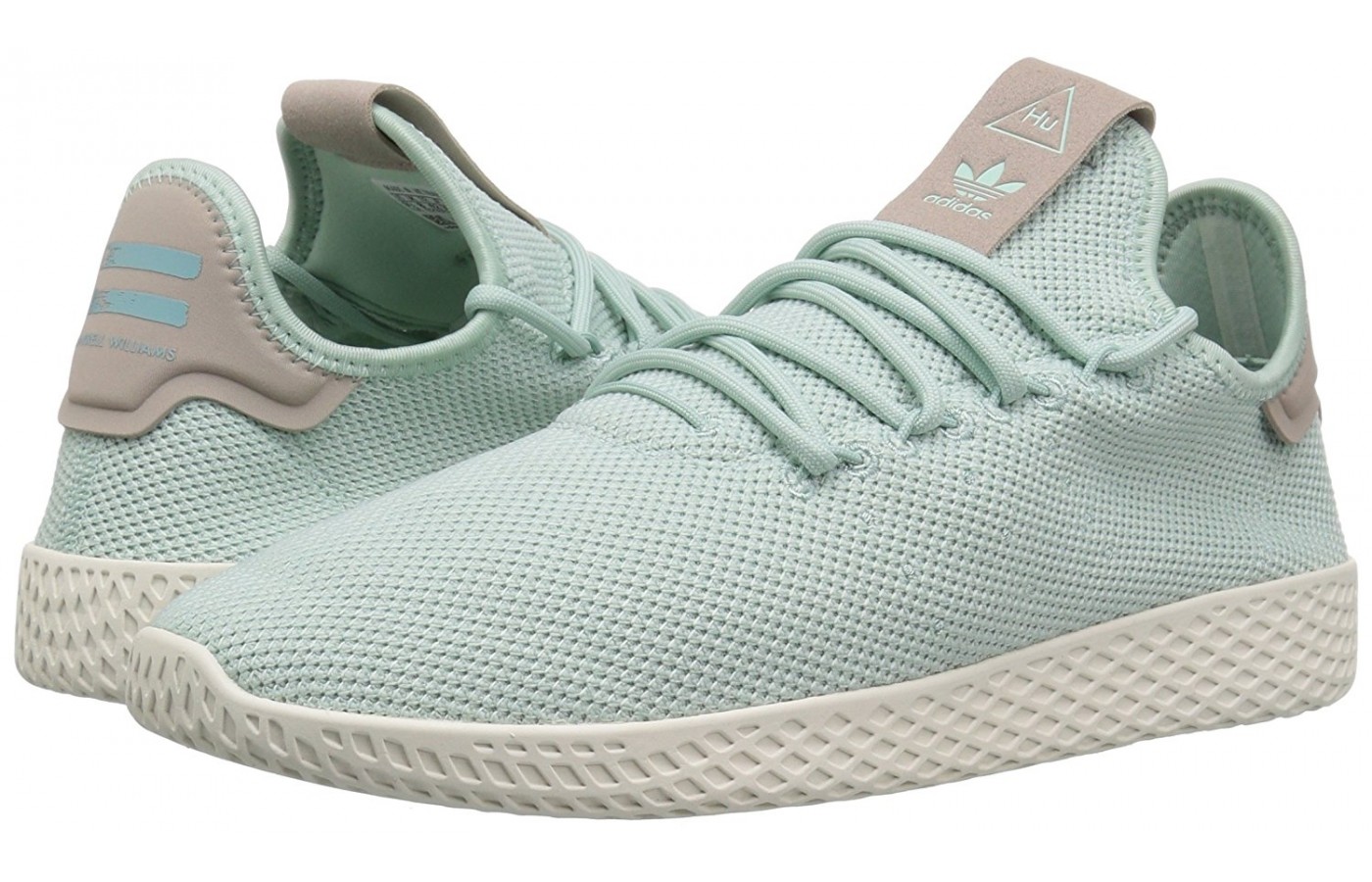 Pharrell is known for creating shoes that don’t have the “average” level of style. The shoes in this man’s portfolio always have something different. From The NMD racer line to his BBC (Billionaire Boys Club) line, every piece of fabric that he touches appears to turn into gold. Nothing different has happened with his Adidas HU racing shoe. It’s supposed to model his HumanKind move in a way; many of the shoes that he’s created in the past few months have centered around this idea. There really isn’t much else needed to introduce this shoe, it’s dope enough to do without it.

The outsole of the Adidas Pharrell HU appears to be made from the same standard hardened rubber which allows the shoe to keep the wearer from slipping around on the surface of their choice. These are lifestyle sneakers so it must be kept in mind that they won’t have the most peculiar or functional outsole design on the planet. The hardened rubber in the outsole of the shoe is fashioned into a waffle pattern, which assists it in providing wearers with the grip that they need during use. In addition to this, on both the forefoot and heel Adidas decided to place a piece of blown rubber with the Adidas logo on it; this allows the shoe to have both more stopping power and durability than if the rubber pieces weren’t present.

This shoe doesn’t have the highest level of cushioning. Rather than place their Boost material into its midsole, Adidas decided to fit it with a standard EVA midsole. EVA is a material that allows the shoe to provide what one would need in terms of cushioning due to the level of compression that they go through. The pattern of the midsole is pretty much the same as it is on the outsole; it has the waffle texture, which adds a certain level of style to the shoe’s design. A cool aspect of this shoe’s design is the fact that it has a foam insert riddled with a Chinese medicine map.

The upper of the Adidas HU is made from the standard mesh fabric. It does have a relatively minimal design, which makes sense due to the shoe being a lifestyle sneaker. There are no overlays along the entire upper nor are there really any type of logos. The only visible type of logo in the shoe’s design would be on the heel section where it says Adidas with the name of the creator, Pharrell Williams, printed directly beneath it. Adidas got rid of the standard lacing in this shoe’s design as well, instead opting for a shoe without eyelets. To enhance the functionality achieved by the lack of eyelets, the HU also features a drawstring that winds around the lacing.

Here’s something that you don’t find very often in a sneaker of any kind. The entire shoe weighs roughly 6.5 oz(obviously depending on the size that you purchase). For a shoe to be this light is simply, unprecedented. The lightweight design that this shoe has can be attributed to the utter minimal design as well as the various lightweight material that are featured throughout. Things like a sole mesh upper as well as the EVA midsole are what keeps this shoe feeling as if one is literally walking in a non-existent shoe (funny right). Adidas did a great job with keeping the weight on this shoe down.

The upper on the HU is thin, some actually say too thin. The mesh make of this shoe enables it to provide wearers with what they need regarding airflow due to its thin cut. A perk of the HU’s design that sometimes goes overlooked by other individuals is the fact that the shoe doesn’t have an Adidas logo along the sides; in the place where the logo would be, there are 3 perforated stripes that enable the shoe to provide the wearer with what they need in terms of breathability.

One of the most praised aspects of the Adidas HU is that it is one comfortable shoe. The design of this beast is one that is meant to cradle the foot and provide levels of comfort far beyond that which one would usually expect from a shoe; it makes sense since it is a lifestyle shoe model. A major contributing factor to the level of comfort that is provided to the wearer is the fact that the shoe is amazingly lightweight; it isn’t often that one receives a shoe that provides them with the feeling that it isn’t even present on foot. In addition to the shoe being lightweight, both the breathability and the stretchiness of the upper ensure that wearers have what they need regarding comfort from this area as well.

These are lifestyle shoes; while they may appear to be fashioned after running shoes, they shouldn’t be used in this manner. With the actual purpose of the shoe out of the way, it’s time to get to the basics of it’s design and what makes it the highly regarded stylish sneaker that it is today. Pharrell has an eye for fashion; this can be noticed by looking at both his own clothing lines as well as the various other brands that he’s collaborated with. This is why it makes sense for the HU to be a relatively stylish sneaker. The cut of the shoe blends with almost any type of outfit effortlessly and provides wearers with what they need in terms of style while in use. Oh, did I forget to mention that they also come in a variety of styles as colorways.

The natural materials that the outsole of the HU is made of aren’t the most durable; it was to simply have the solid rubber outsole, then it wouldn’t be able to provide wearers with what they need in terms of functionality or grip. To counteract the innate lack of longevity that the rubber outsole has, Adidas fit the shoe with blown rubber padding in the high-pressure areas; this works incredibly well to give wearers what they need in terms of functionality and ease of use when the HU is worn. The upper on the other hand doesn’t really give wearers the highest level of longevity. That’s not to say that it will simply break down when used, rather, it wouldn’t be able to keep up with high levels of activity for very long.

These are lifestyle shoes, you can’t really expect these shoes to provide one with what they need in terms of protection during use. They have a thin upper that doesn’t really have the thickness that one would need in order to have an adequate level of protection. With that being said, they aren’t really designed for situations that will require protection in the first place; these shoes are meant to look cool and be comfortable, nothing more and nothing less.

EVA foam is a relatively responsive material. Due to the shoe’s midsole being designed from this material, the HU is a shoe that one can expect to be relatively responsive during use. Adidas made sure to place an extra level of padding in the heel of the shoe in order to give wearers an extra level of shock-absorption for their underfoot; this feature would work wonderfully well for giving wearers what they need in terms of responsiveness if the HU were designed to be a running shoe.

The funny thing about the HU’s design is that it has no supportive features whatsoever. With that being said, it isn’t supposed to. The plush and extremely thin upper that these shoes have is meant to be almost nonexistent and provide wearers with what they need in terms of comfort, not stability. The lacing, if tightened all of the ways, does make the walls of the shoe feel a bit tighter than if they weren’t; this, in turn, does give wearers what they’d need in terms of support during use. The EVA midsole also cushions the underfoot and supports the wearer’s heel.

Well, these shoes can be used on almost any terrain , as long as they aren’t being used for activities that may open the shoe up to any kind of stress. The HU, being a lifestyle shoe isn’t really designed for any strenuous activities; using it for running or any other kind of high-stress activity would likely result in the shoe degrading very quickly. The blown rubber in the outsole of the shoe does lessen the chances that the shoe will degrade quickly but, it’s suggested that it isn’t used in the way that will result in one being unable to wear this fly sneaker.

Adidas wanted many of their patrons to be able to access this wonderful pair of sneakers; for this reason, the Adidas HU is relatively affordable. For the model that we are discussing in this particular review, one can find a pair for a price that is nothing short of miraculous. The surprisingly low rise that these shoes opens one up to possibly considering these shoes something that adds/has value. While it isn’t full of the technologies that other shoes are being released with nowadays, it does have the Pharrell branding and is relatively stylish; this is a shoe that one doesn’t want to miss out on.

Again, these aren’t shoes that one would want to use for an activity that would require any sort of grip; they just don’t have a design that promotes that. One would like to have a pair of shoes on their feet that doesn’t open them up to slipping around while they’re worn; Adidas knew this and added materials that would prevent this from occurring while the shoe is on foot. The blown rubber featured on this shoe’s outsole does greatly improve the grip of the shoe overall. Thanks to the addition of this material, wearers don’t have to worry about feeling as if they are going to slip around in the shoe while in use.

The mesh upper of this particular shoe does allow it to have an incredibly high range of motion. The mesh bends in such a way that allows it to move to the rhythm of the foot quite easily(with little resistance). For a lifestyle shoe this is something that one would generally look forward to in the design of their sneaker. It improves the level of comfort provided to the wearer and is something that doesn’t have to be feared due to the fact that the material is mesh; it won’t crease during use.

The only stability providing features in the design of this shoe is the lacing and the EVA midsole. Other than those things, this shoe can be said to be quite “shifty”. The lacing allows the shoe to provide wearers with what they ‘d need in terms of stability due to the fact that they have the drawstring design throughout. The drawstring and laces work together to pull tight at the mesh material, further securing the foot.

No drop has been stated for this particular shoe but, from looking at the design one can tell that it’s relatively insignificant. While Adidas did make it a point to add a level of cushioning to the heel of the shoe, they didn’t add it to the point that it would make the shoe’s drop to be noticeable.

These shoes are by far, the coolest looking shoes that Adidas has designed in a while. The slim look that they have as well as the minimal upper that they have allows them to be incredibly stylish. In addition to these shoes being incredibly stylish, they are inexpensive. Can it really get any better than that? This Pharrell and Adidas collab is one that is definitely well-sought after and for good reason.