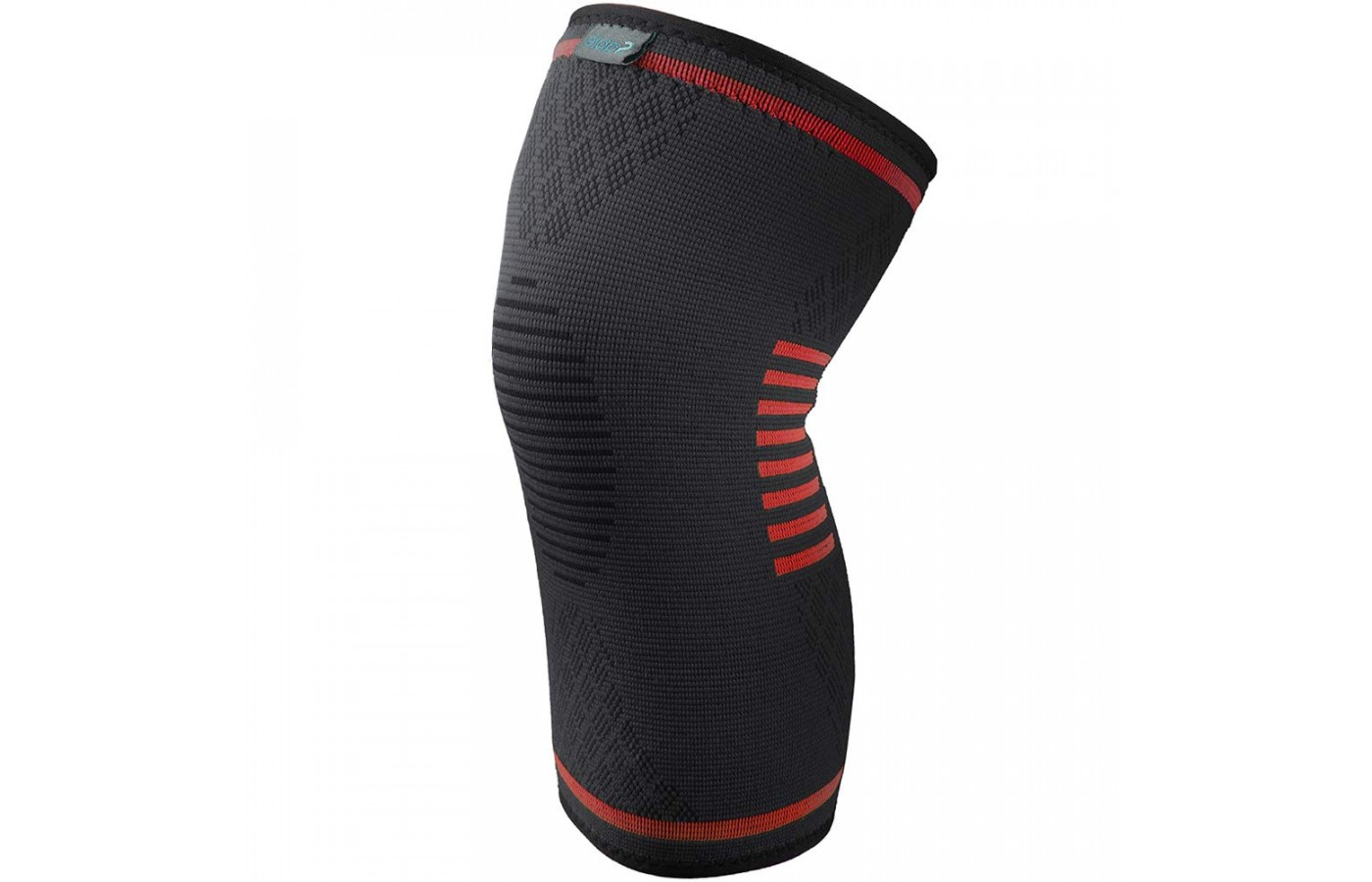 Coming in a pair, the Sable Knee Brace will blow you away if you regularly participate in high-impact activities. A spiral weave keeps this brace by Sable flexible and light. It wicks moisture and reduces odor, making it more pleasant to wear for longer periods of time. Your knees will feel brand new once the Sable Knee Brace reduces their swelling and improves your circulation.

Lightweight and ready for everything, these let you retain a full range of motion while still giving you full support. With a design that is not incredibly size-inclusive, some may dislike how this fits them. In addition to this, the silicone in the grip irritated some buyers. Those concerns are superficial, as it doesn’t affect the support the Sable Knee Brace provides. Runners and those with knee injuries won’t want to pass up a chance to have their pain eased by this product.

Most knee braces claim that they won’t sleep but when it comes time to show what they’re made of, they do less than what is expected. This isn’t only frustrating, but it gets in the way of your performance in several activities. Adjusting and readjusting a knee brace just doesn’t cut it when you’re trying to be your best.

Non-slip waves are extremely effective in knee braces, and this Sable Knee Brace comes equipped with them. The longer length can make people wary about its staying power but they don’t need to be. Reviewers loved that this stayed in place even during the toughest challenges.

Beware of imposters who sell knock-offs of the Sable Knee Brace, they do not have these anti-slip strips or even half of the durability. Authentic Sable Knee Braces can stay in place even during marathons, however. Those who bought them were shocked at the staying power they provided and you will be too.

Using spiral elastic weaving, the Sable Knee Brace feels secure without trapping in sweat and heat. When you’re working up a sweat at the gym or during your morning run, you won’t feel sweaty and overheated due to the brace. Though it does warm your muscle for injury prevention and muscle repair, it won’t feel hot to the wearer.

Since the fabric wicks moisture, any perspiration is brought away from the skin into the material to dry. Breathability is mostly a measure of absorbance. It is when moisture can easily pass through the material, also aiding in cooling and comfort. The Sable Knee Brace is an excellent example of how breathability should feel on your favorite brace.

Though most reviews had only positive things to say about the Sable Knee Brace, there are some concerns to mention in terms of comfort. The silicone strips that keep the brace from slippage ended up causing a rash for some wearers. It seems that either the silicone had an irritant in it or people were reacting to allergies they previously didn’t know they had.

This is a hard subject to breach because there is no clear answer. Silicone is generally not allergenic. It could be that something that is transferring to the brace from where it is manufactured is causing contact dermatitis. There is no real way to be sure but it is something to be wary over considering the cause isn't concrete.

This was only mentioned in the lowest reviews, which were in the minority, but it was brought up frequently enough to cause concern. Otherwise, people who loved the brace has absolutely no problems with comfort. Reviewers loved that these didn’t need to be frequently readjusted, which can cause skin irritation by itself.

The level of compression is balanced so that it doesn’t feel constrictive but it soothes sore knees. Runners are going to want to try on this Sable Knee Brace if they have frequently struggled with finding the right level of compression. This is a balanced take. The moisture-wicking fabric helps to reduce friction, as moisture increases friction between fabric and skin.

Compression is the star of the Sable Knee Brace. So many good things were said in reviews about its benefits to wearers. If you have a knee injury, the pain can not only inherently lower your quality of life, but it can also keep you from doing what you love. Runners dealing with knee injuries often have to choose between feeling good in their brace temporarily and their brace supporting them over time.

This is unacceptable and the Sable Knee Brace has addressed that. Their compression is snug but not painfully so. Compression products frequently can feel like they’re overly tight, which can hinder circulation instead of helping it. Since the improved circulation is one of the biggest components of muscle repair, this is crucial in a brace.

The Sable Knee Brace supports your movements and helps you have more muscle control while still proving great compression. For those athletes and consistent exercises with knee pain, the compression of the Sable Knee Brace can change their experience. No more aches from trying to do the body well or following your passion.

This Sable Knee Brace has a slightly longer design than other brands. That means it supports not only the patella itself but the whole knee. This gives you more stability in your movements. That isn’t the only benefit of a longer brace, however.

While many might worry that this could cause the brace to roll more, it gives it a sturdier grip on the leg. Since the grip on the inside of the Sable Knee Brace is further from the bending joint, there is less resistance causing it to roll down. The result is much easier to wear and comfortable compression item.

In addition to these design elements that change how the Sable Knee Brace is worn, it also looks more ergonomic. You can see how the spiral weave compression fabrics hold and support you just by looking at it. How it supports you is obvious just from the look of it.

That being said, the shape of this brace didn't work for all body types. Some felt that it failed to support them if they had more substantial thighs. Bodies should have a solution for their ailments no matter what shape they are, so this is slightly disappointing for many potential buyers.

It is light enough to be worn under scrubs without discomfort or chafing. If you work as a nurse or doctor and spend a lot of time on your feet, the thin but durable material of the Sable Knee Brace will work seamlessly. It is undetectable underneath your work clothing and you won’t have to stop an important task to adjust it due to discomfort.

Some found the material slightly scratchy, but that wasn’t consistent with the majority of opinions. The Sable Knee Brace felt soft, light, and comfortable for most wearers. The materials in the silicone strip did cause irritation, which might have led some people to think it was the material itself but it wasn’t a universal problem for everyone.

Braces get smelly since they’re worn so frequently. Knee injuries require frequent support. One of the most unpleasant experiences in wearing braces is the smell they can take on with wear. The Sable Knee Brace is resistant to odor to keep you feeling fresh even on marathon runs.

This can be washed in cold water and left to dry pretty easily but it doesn’t require daily washing since the moisture-wicking prevents bacteria. The leading cause of unpleasant smells is bacterial growth. If your braces quickly get smelly, they may not be moisture-wicking properly. The Sable Knee Brace won’t come off feeling damp or wet like some other braces may, which is proof of its ability to move moisture away from the body.

If you like a low maintenance brace the Sable Knee Brace is it. There are great for those who go to the gym after or before work and specifically need support for high-impact workouts. They won’t stink up a gym bag after a couple wears. That isn’t to say that your gym bag essentials wouldn’t benefit from the addition of odor spray, but it certainly makes things easier.

Reviewers loved the control and power they felt wearing the Sable Knee Brace. It balances its flexibility with a ton of support. Even yogis can wear this Sable Knee Brace without a hitch. Its weave pattern greatly contributes to its flexibility. It has a more anatomical design so it has no problem bending and moving with you.

Braces other than the Sable Knee Brace might bunch behind the knee getting in the way of certain movements. In the Sable Knee Brace, there is no worry about bunching keeping you from fully bending or extending your knee. The waves help it to hold onto your leg when you’re in motion, no matter what that motion is.

Knee braces are so rarely two to a package. This Sable Knee Brace has two for essentially the price of one. This value cannot be compared to other brands on the market. You’re essentially paying nearly half price for double the merchandise.

If you worry about wearing out the Sable Knee Brace from excessive wear, this second brace can be your extra, or you can alternate to extend the life. For those with injuries or pain in both knees, you have two ready to go. This is especially useful for runners or anyone who takes part in activities that are hard on the knees. Combine this Sable Knee Brace with the right running shoes for knee pain and you can go running without any worries of a knee injury.

Of the negative reviews, this was one of the common complaints but wasn’t a common complaint overall. It seems that the material when strained can tend to roll a bit on the leg.

If you have thicker thighs, the fact the brace is longer and the flexibility of the material may make these roll or bunch. Those with this body type may want to opt for a shorter brace that doesn’t come as far up on the thigh. In terms of versatility of usage, however, the Sable Knee Brace is fantastic.

If you’re looking for a dependable knee brace that just won’t quit, this option by Sable is ideal. It won’t slip down in the middle of a shift or workout. You can see just by looking at it that the fabric is durable, even for daily wearers. People with knee pain who are looking for relief will love the targeted compression of the Sable Knee Brace. If you have sensitive skin, be wary of the non-slip silicone, as it can cause reactions in some wearers.

Otherwise, this breathable, flexible option works as hard as your knees do. Knee injuries will get instant relief when you slip one of these on. This FDA-approved brace will keep up with you no matter what your passion is. 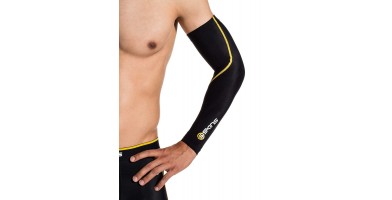 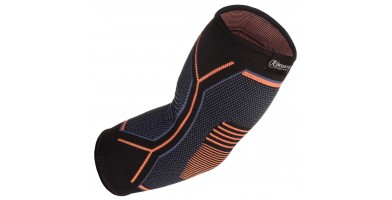 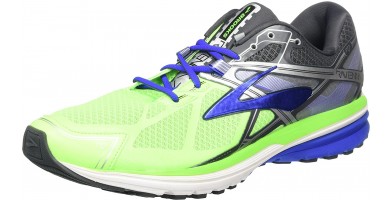