HomeLightweightNike Air Zoom All Out Flyknit Reviewed and Tested

Nike Air Zoom All Out Flyknit Reviewed and Tested 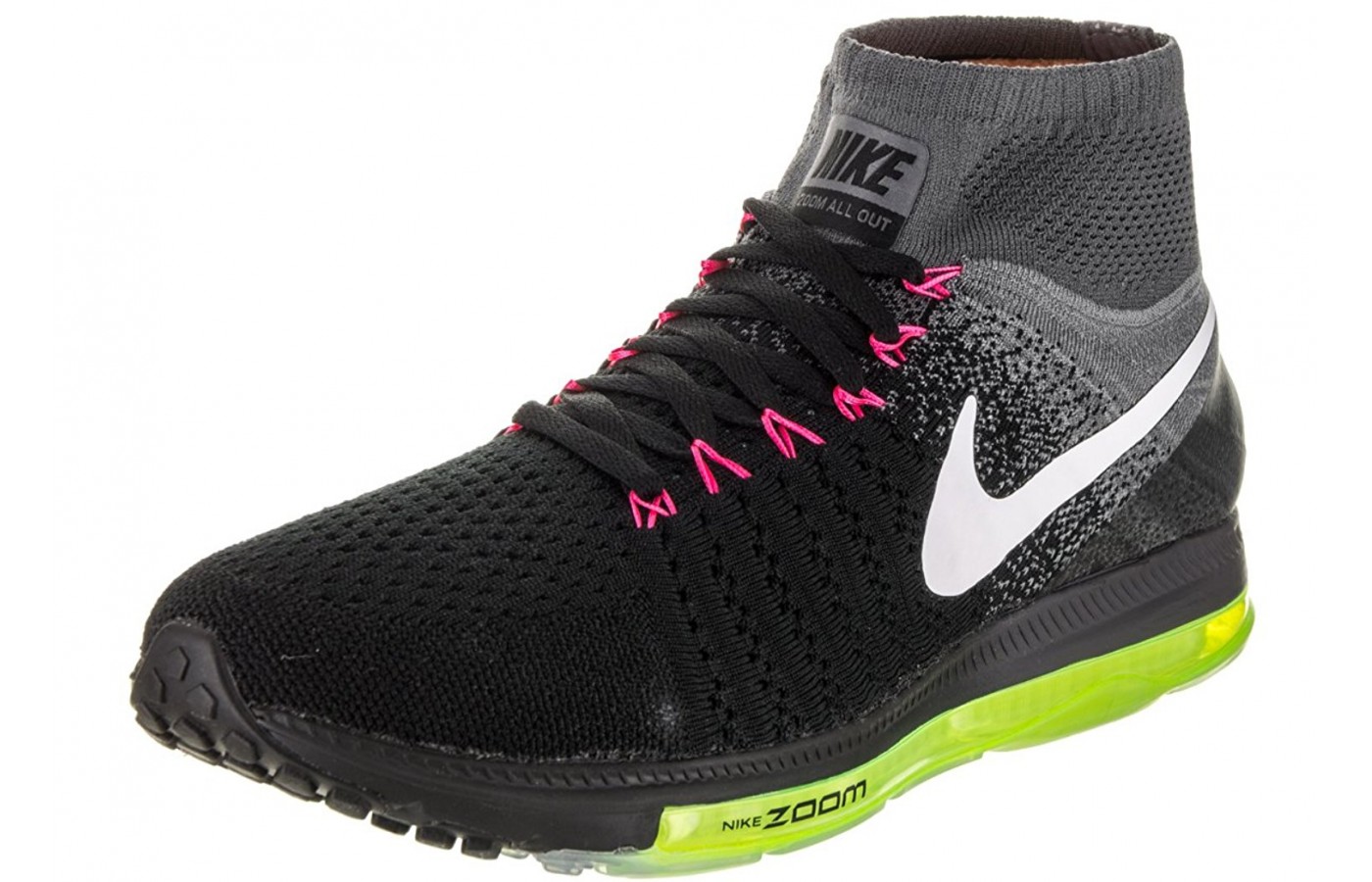 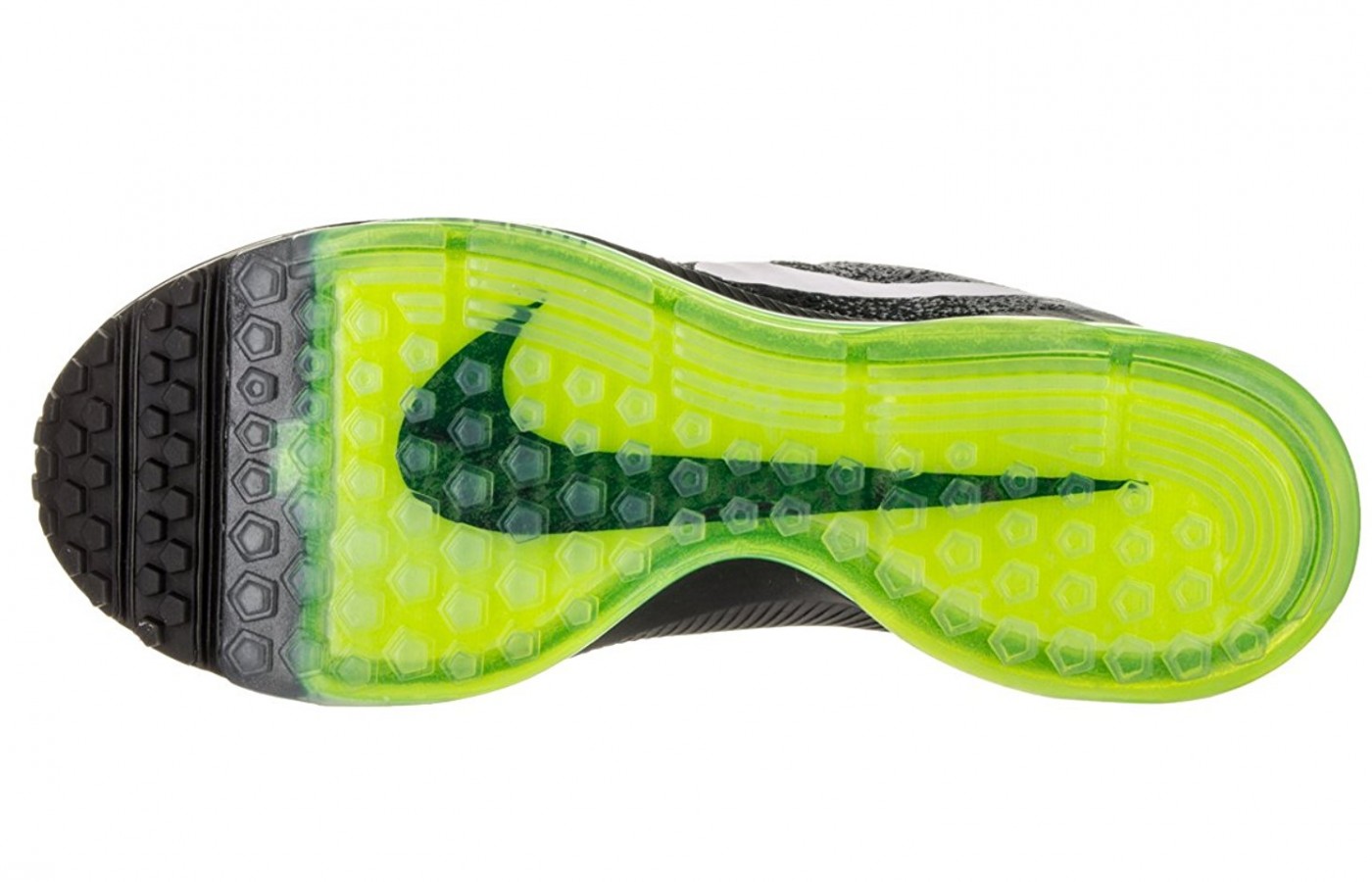 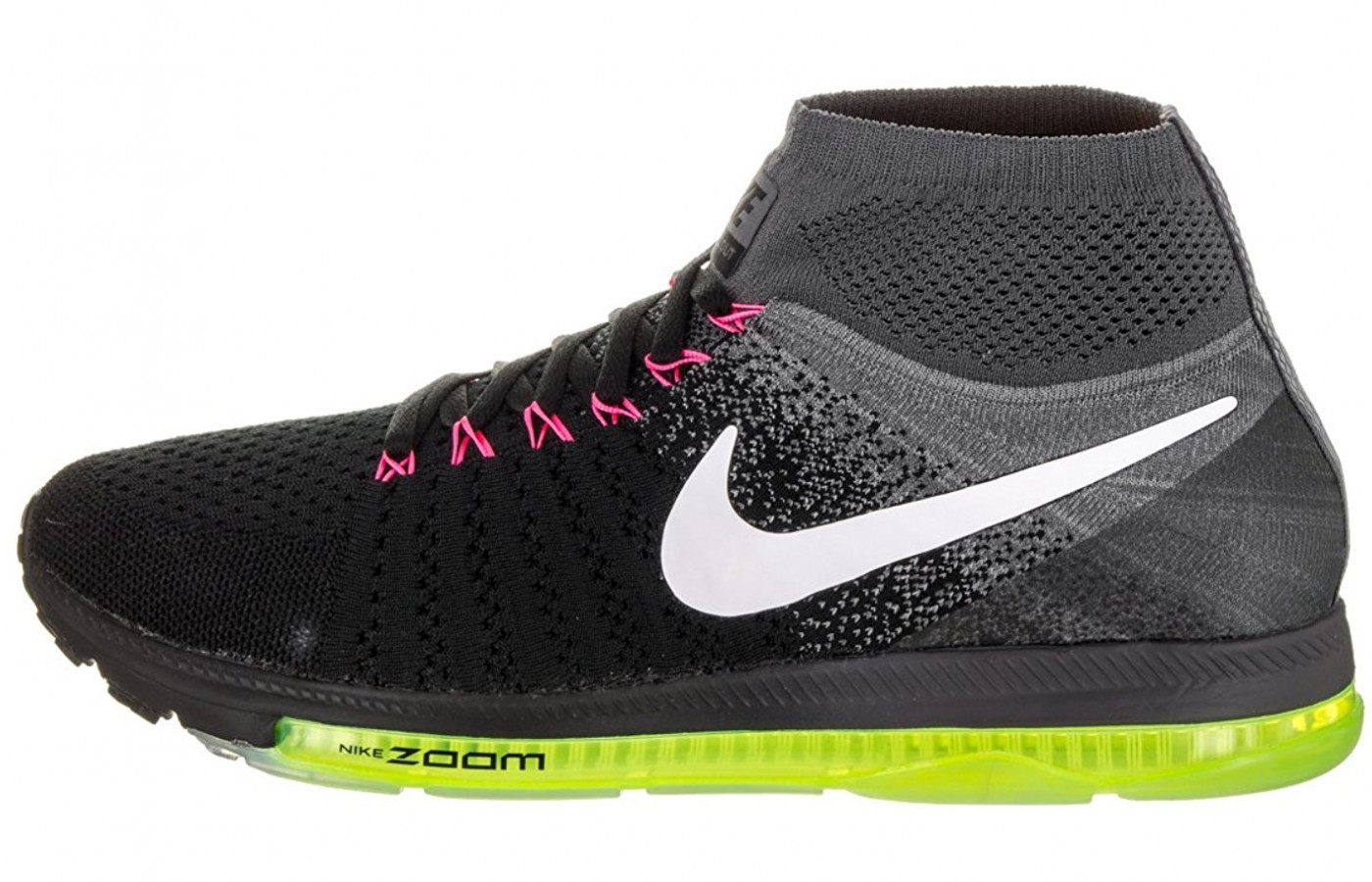 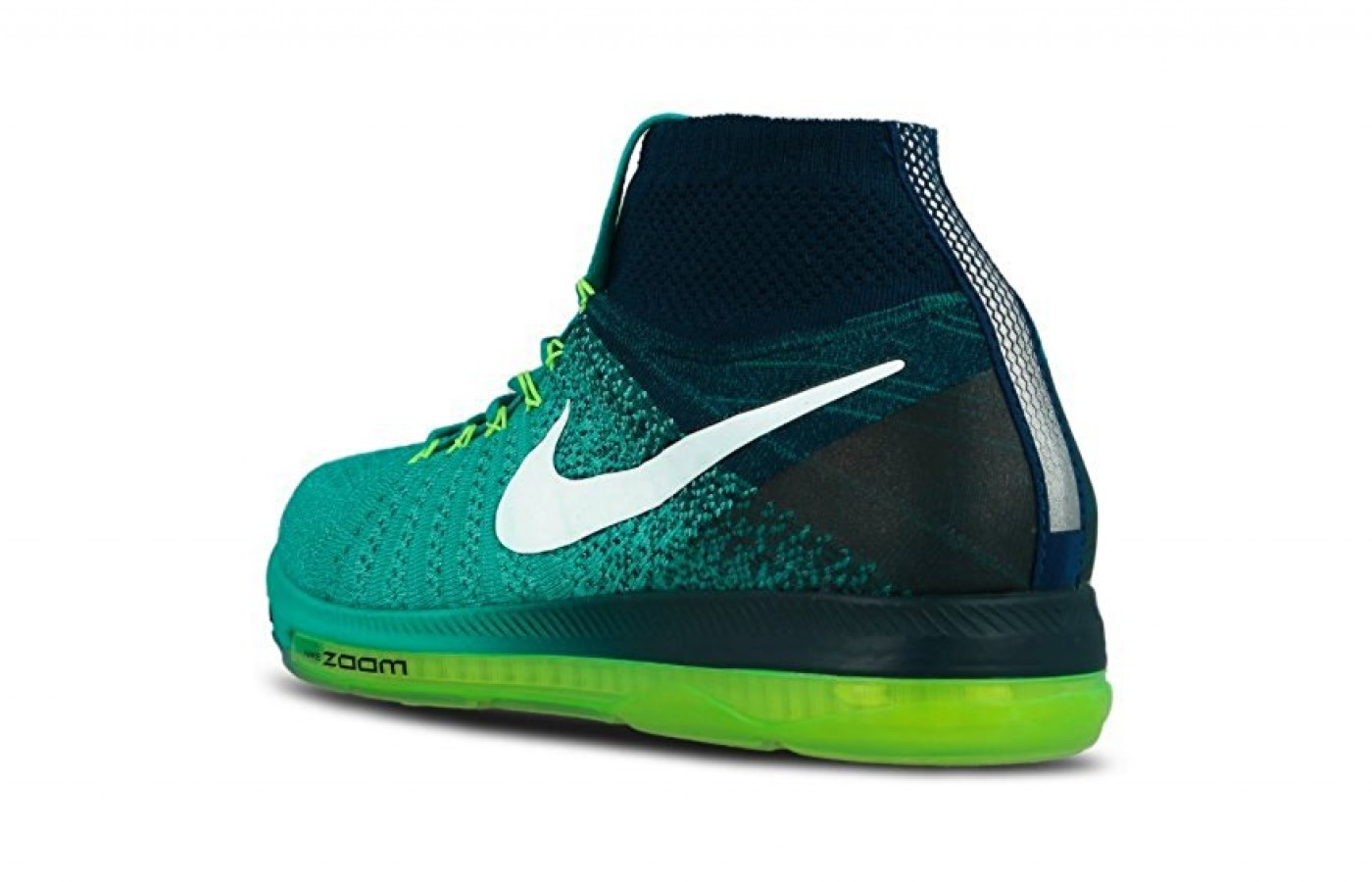 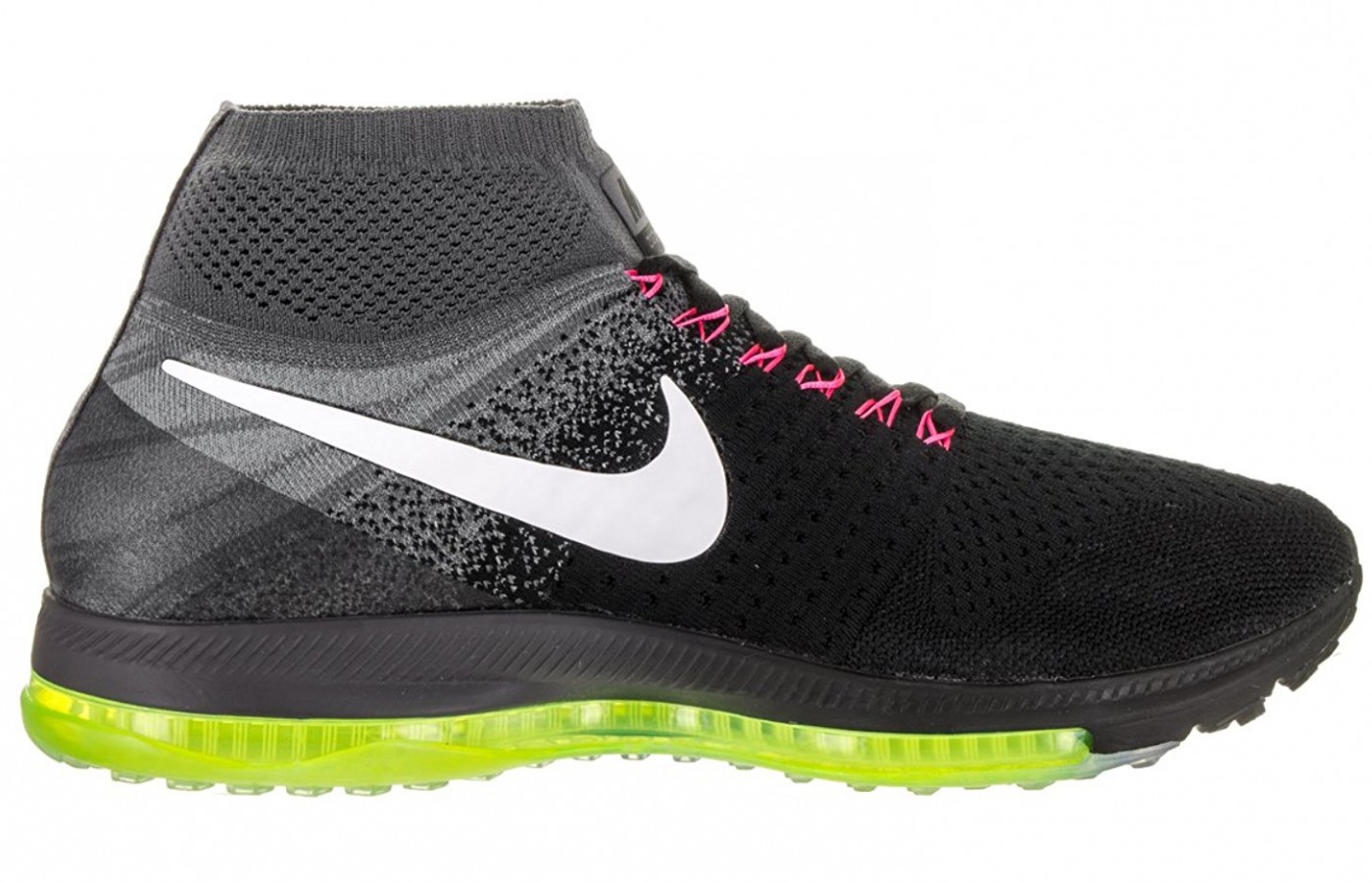 8.4
8.4 score
(WalkJogRun) score (8.4)/10
Our WalkJogRun score is based on 3 different factors: Editor's rating after in-depth testing. User ratings submitted on this page Overall score from the "reviewmeter" based on reviews across the web the weight of each factor is: 40% editor rating 15% user ratings 45% reviewmeter.
0
Editor rating: 8.6 / 10

By simply looking at the Nike Air Zoom all-out Fly knit, one can tell that Nike was aiming to provide the users with a comfortable semi-supportive shoe, with the exception of its lightweight flyknit upper. The Nike Air Zoom All-Out Fly knit was given its name because of the minor weight and the flexibility that the she provides. These things are primarily due to the added technologies that can be found inside of both the sole and the upper of the shoe, such as the fly wire lacing and the extended upper that has become a part of various Nike models.

Positive
Read more
Negative
Read more
Reviewmeter
The Reviewmeter shows you an overall score that you can easily refer to. The highest rating is 10 (100% positive feedback)
Of the 355 reviews we found in total, 24% were negative, and 76% were positive.
7.6
1
5
10

The outsole on the Nike Air zoom was made in such a way as to promote durability and traction. On the Nike Air Zoom All Out, Nike has decided to fit the sole of the shoe with a quality rubber that they’ve nicknamed BRS 1000. This rubber allows the sole of the shoe to attain a higher level of grip while remaining flexible enough to not be uncomfortable. Another thing to note about this sole was that Nike decided to make the back of it translucent, which in a way adds to the shoes aesthetic qualities. Under the forefoot of the shoe are multiple lugs which is another part of the shoe that allows the user to attain a grip.

The midsole of Nike Air Zoom All Out is fashioned in such a way as to blend in with the upper of the shoe. This in a way takes away from the fact that the shoe holds, within the sole, multiple air pockets that help the shoe deliver the amazing ride that it does. The air pods, as they’re often called, respond to the pressure that is placed on them and flexes it back outward, giving the user an extra bounce in their step while the shoe is in use. Other than this, the midsole is also fashioned out of a foam material that benefits the shoe because of the minimal weight that it holds.

The Nike Air Zoom All Out’s upper is definitely something to take note of. The first thing to be mentioned is the elongated upper on the shoe that acts as a support device and stabilizes the otherwise “loose” shoe. The upper is designed from Nike’s Flyknit material, which coincidentally is known for amazing breathability. The Flyknit gives the shoe the ability to conform to the user’s foot, also aiding in the overall comfort level that is achieved. The Fly wire gives the shoe added support and aids the shoe in providing a nice fit for the wearer. Overall, the upper on this shoe was well-designed and features various technologies that improve the overall experience.

Despite the lightweight material that was used in the creation of the Nike Air Zoom All Out, it is a bit on the heavier side. Nike decided to add a bit more cushioning on the inside of the shoe, which added a few oz’s to the overall weight. On top of this, the air pods and other technology that can be found inside of the shoe’s sole contain a decent amount of weight that wouldn’t be there otherwise. Despite popular belief, the added weight doesn’t do much to hinder the ride of the shoe. This is because the weight comes in the form of technologies that benefit the users’ foot during wear time.

The Nike Air Zoom All Out features a mesh upper which is a bit perforated to enhance the shoe’s overall breathability. Before the shoe is placed on the foot, one can see that the forefoot of the shoe is stitched in such a way as to promote the shoe’s inherently decent air circulation. This means that while the shoe is in use the wearer doesn’t feel discomfort that is caused by excess amounts of sweat accumulating in the tighter area of the shoe; a big plus because of the activities that the shoe is designed to be used for. Although the mesh material is thoroughly cushioned, it is surprisingly lightweight which also benefits the shoe in the area of air-flow.

Nike made sure that they gave this shoe all of the components of a comfort-giving shoe. The Nike Air Zoom All Out features several technologies that enhance the shoe’s fit, ride, and allow the shoe to give a decent level of support in use. The shoe features things such as the fly-wire lacing, and the mesh upper, which both allow the shoe to conform to the shape of the users’ foot; this also means that the shoe is able to provide a snug fit that the majority of shoes nowadays simply can’t. On top of this, Nike has fitted this shoe with a decent amount of technology in the sole of the shoe that gives it the amazing ride that the shoe is known for. The air pods that are fitted within the sole of the shoe flex with the users’ foot while also sending that energy back out.

The Nike Air Zoom All Out is unsurprisingly a stylish shoe. Nike has designed this shoe to be on the slimmer side, which blends in with the style of other shoes nowadays and gives the shoe a versatile appearance; it can be worn with a variety of clothing apart from just running gear. The look of the shoe is aesthetically pleasing, which is to say that Nike has done a great job in piecing together different materials that complement one another; even considering the flashy translucent material that is on the back side of the heel and how it compliments the darker colors that make up the rest of the shoe.

Nike has made sure to make the shoe out of materials that guarantee more than just a couple hundred miles of use. The sole on the Nike Air Zoom All Out is relatively thick and textured in such a way as to be able to withstand extended periods of use. This, coupled with the thick, layered midsole, allow the sole to be usable for much more than a majority of shoes of it’s caliber. The upper is the one weak area on the shoe, seeing as it is relatively thin, despite all of the cushioning; it does begin to wear down after a rather short period of time.

The Nike Air Zoom All Out doesn’t have as many protective features as it’s competition. The upper on the shoe is rather firm, but the material that was used simply lacks the stability to be of any real use. The sole is rather thick, which does help the wearer in that area; meaning that materials that would harm he users foot, simply can’t make it through that area. A major portion of the sole that offers protection is the back section which is the Zoom air unit; it is made from a denser material which does it’s best to block the material that could otherwise penetrate it.

Nike has fitted the Nike Air Zoom All Out with both the Zoom air unit and the Air pods that are within the midsole of the shoe. The Zoom air unit, like the air pods, take the pressure that is taken in from contact and absorbs it relieving the users foot from the pressure felt by the ground. The shoe’s air pods act in a similar way by flexing to meet the needs of the users’ foot while also absorbing some of the shock from the ground.

The Nike Air Zoom All Out can handle a plethora of terrains. This is due primarily to the type of material that was used to make the sole of the shoe. The sole is designed from a hardened rubber material that is able to withstand the more strenuous surfaces; this is the nature of hardened rubber on the majority of shoes. The patterning of the material also adds to this effect, because it aids the shoe in being able to withstand and function on the multitude of surfaces. The Nike Air Zoom unit also aids the shoe in being able to maneuver on the various surfaces that it can be used on, primarily because of it's toughness and patterning as well.

One thing that can definitely be said about this shoe is that it is fairly expensive. The Nike Air Zoom All Out is priced in such a way as to help Nike explain all the benefits that the wearer will be able to partake in. The shoe contains various technologies such as the flywire lacing and the Nike Air Zoom unit that help justify the price of the shoe. On top of these features the shoe has a decent amount of grip and the provides enough stability and support which make up for the cost of the shoe.

The mesh make of the shoe allows the Nike Air Zoom All Out to be flexible. The shoe’s upper is made from a perforated mesh material that is able to conform to the will of the user’s foot in all aspects. The material that makes up the base of the shoe is also rather flexible, mainly because of the air pods and the cushlon foam that it is made of. The cushlon foam, much like the other cushioning materials is made so that it is able to bounce back from the pressure that is placed on it during everyday use; this also implies that it is able to move with the movements of the upper in an outstanding fashion.

Overall, Nike did a decent job in the creation of this shoe. The sole is relatively thick, which in turn implies that it’s somewhat durable. The mesh upper aids the shoe in its efforts to be durable; the addition of the flywire lacing and elongated neck on the shoe allow the shoe to provide a bit more in the way of stability to wearers without taking away from the shoes functionality. The sole features a Nike Air Zoom unit that benefits the shoe’s overall ride and, coupled with the cushlon foam and the hardened rubber material that makes up the sole does its job very well. 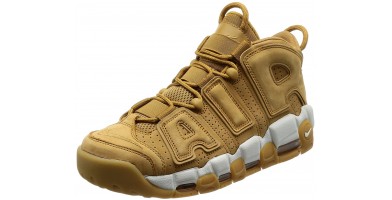 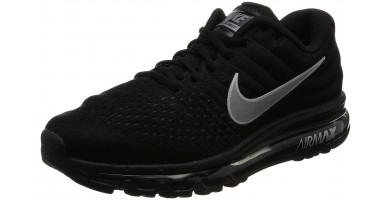 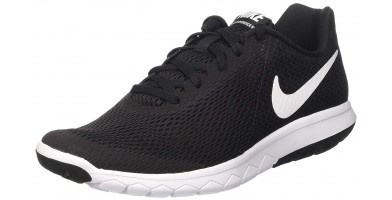