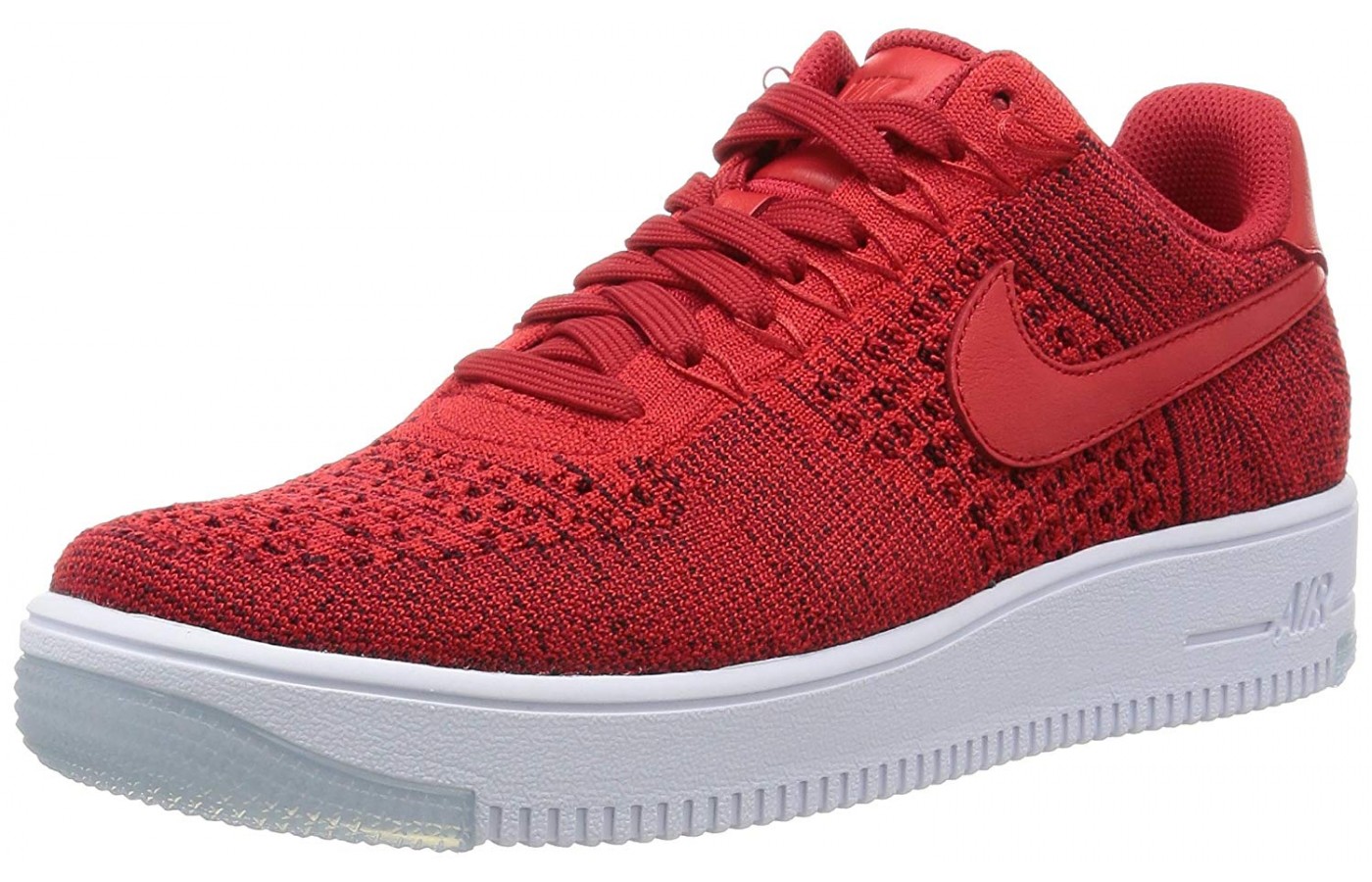 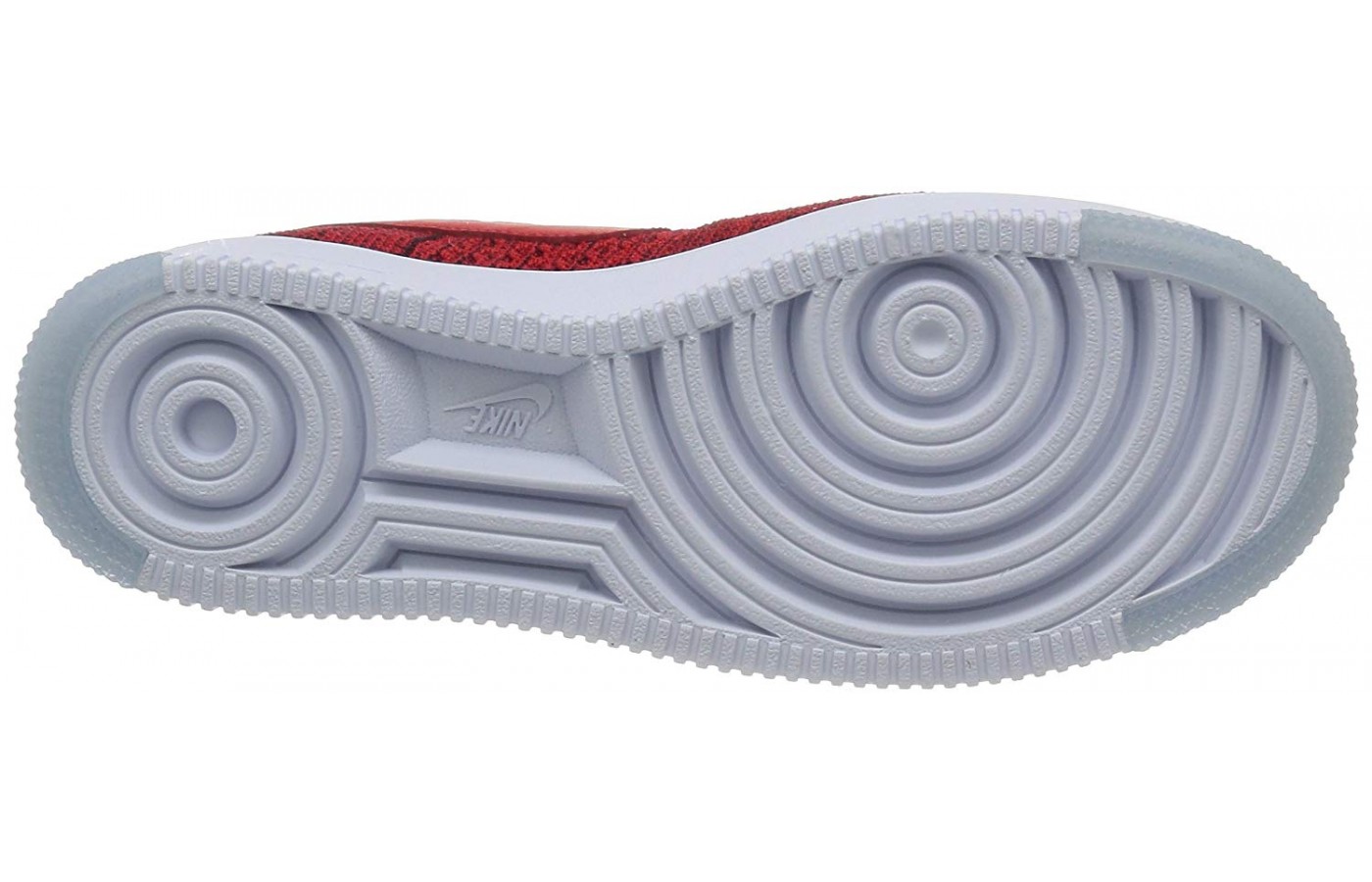 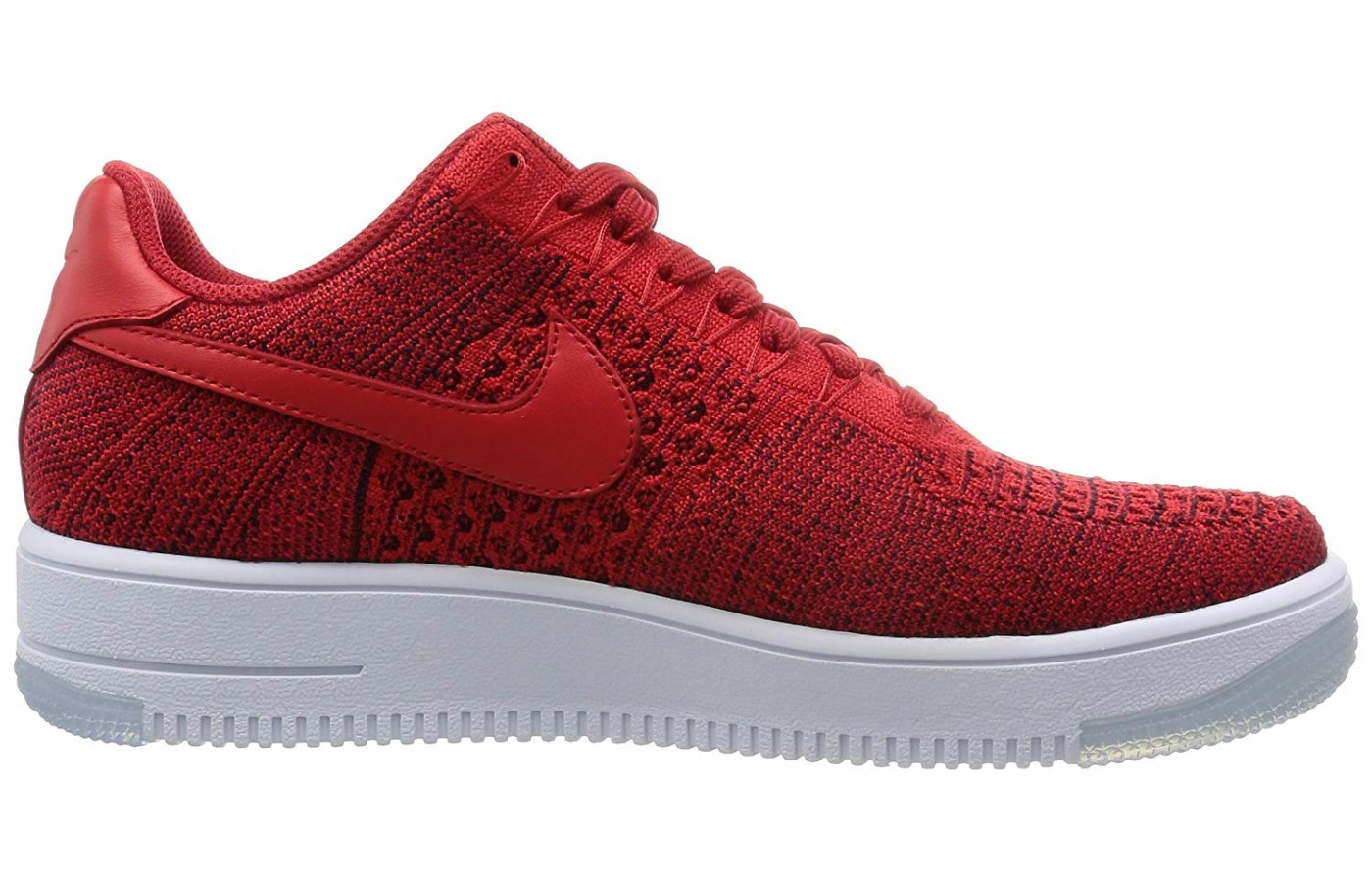 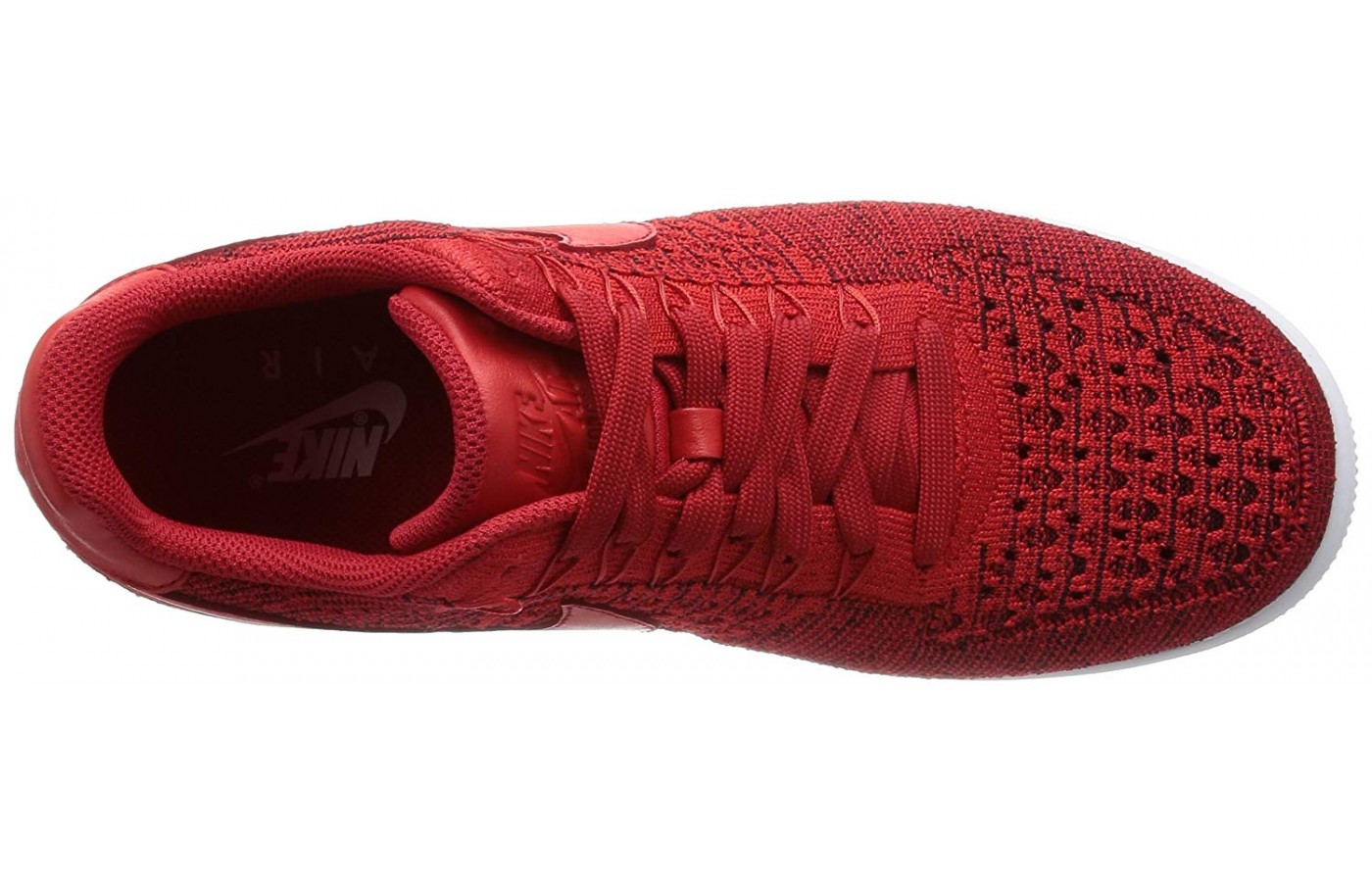 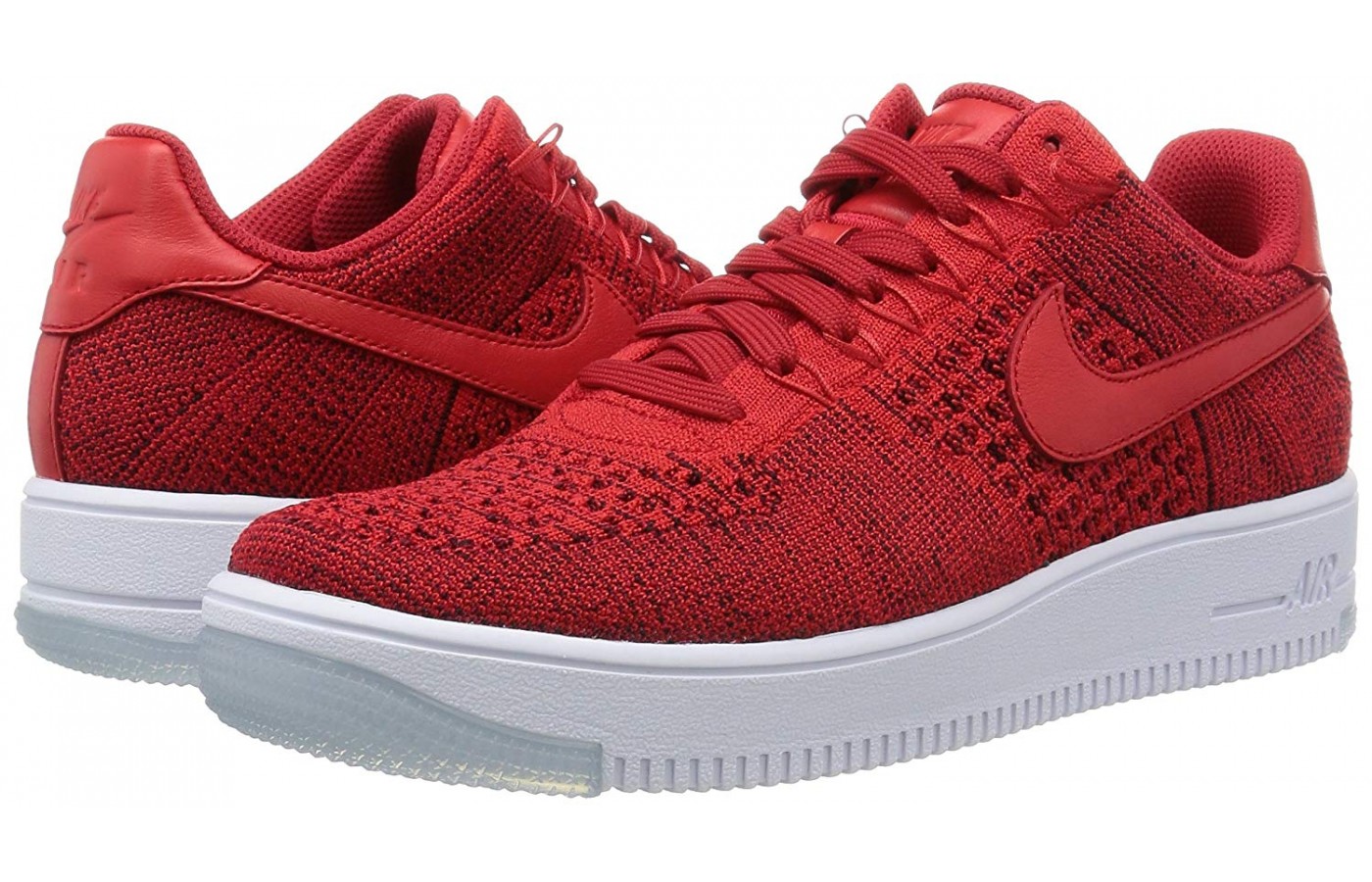 If you were a fan of the original Airforce 1 shoe, then you’ll likely become entranced with this new and improved version.

Something that Nike has been doing a lot of lately is recreating their designs using their popular Fly knit fabric; that’s exactly what’s going on with the design of the Air Force 1. The shoe features a full-on Fly knit upper and provides wearers with much more than they would receive from the original full-leather upper of the shoe. Released in 2016, Nike took the shoe market by storm with this fly pair of Air Force 1’s.

The outsole of the Nike Air Force Flyknit is made from the standard layer of rubber. It features a pretty basic circular pattern; the same pattern that’s featured on the standard Air Force sole unit. To spruce the outsole up a bit and add a bit of durability, The AF1 Flyknit features pivot points on the heel and toe box area to help with transitioning.

The midsole of the AF1 Flyknit is actually where most of the Nike ingenuity comes in. The shoe has a standard Injected Phylon foam midsole but, also features a Nike Air Pod in the heel of it's heel. The Injected Phylon material in the midsole allows the AF1 to have quite a bit of give and provides wearers with an insane level of cushioning. Compared to the standard EVA midsole of the Original Air force, the cushioning in the midsole of this shoe is a bit plusher. The Air pod provides an added level of support to the wearer’s heel as well, ensuring that the feel of the ground doesn’t overly fatigue the foot. The different make of this AF1's midsole takes away most of the functionality it once had as a basketball shoe though.

The upper, as the name of this review suggests, is made from a Flyknit material. Compared to the standard leather upper the initial design had, the Flyknit included in the design of the AF1 flyknit is a great overall improvement. The structure that the Flyknit provides to this shoe is wholly the same, basically meaning that the shoe still resembles the standard Air Force One. The lacing on the hand is made from another of Nike’s creations, Flywire. The use of Flywire lacing allows the AF1 flyknit to provide a comfortable and snug fit to the foot of the wearer.

One of the greatest improvements that this AF1 variant has over the initial release is that its design isn’t one that holds a lot of weight. That in mind, one of the things that Nike proudly boasted about in regards to the shoe’s weight was that it’s been cut in half compared to that of the Original AF1. With these things being said, the design of this shoe weighs in total, roughly 8.8 oz; for a shoe based off of the standard leather and EVA design of the original that isn’t half bad.

Flyknit is just one of those materials that are guaranteed to provide an above average level of airflow to the wearer’s foot. The material moves alongside the movements of the wearer’s foot and, in addition to that, is relatively porous. The fact that the material is knit also means that the AF1 Flyknit will also provide wearers with what they need in regards to moisture wicking ability when in use. The sweat that the foot secretes has no chance to get trapped in the upper of this shoe and thus, is forced to escape leaving the shoe and the wearer’s foot dry.

Another thing that wearers of the shoe have proclaimed about this shoe is that it’s extremely comfortable, much more so than the traditional Air Force. The shoe provides wearers with cushioning for both the heel and forefoot areas and thus flexes relatively easily in both of those areas. The Phylon cushioning and the Air Pod in the midsole of the shoe also makes the shoe much more comfortable than the average design. The upper, while being snug fitting, also provides wearers with comfort due to it being made of Flyknit and the qualities that Flyknit holds. The shoe also features an ortholite insole that provides wearers with support for the high-pressure areas of the shoe.

The original AF1 was stylish, now that it’s been re-done it’s only even more so. The AF1 Flyknit has a look that stands out regardless of the area that it’s worn in; this is due to it’s being made of Flyknit and the fact that it’s an Air Force 1 shoe. While the shoe resembles a basketball shoe, it has the look of a shoe that can be worn in various different areas with relative ease. Regardless of the cut of the shoe (hightop/low-top), it can be worn with various different outfit styles and to various different types of events. Keep in mind that the Flyknit re-make of this AF1 does take away from it's ability to be worn as an actual basketball shoe.

While Flyknit itself is a relatively durable material, it’s nowhere as durable as the original shoe’s leather upper. Depending on where the shoe is worn and what activity it’s worn for, the AF1 original may not be the best choice due to it’s having an upper that can have a hole ripped into it without a moments notice. Keep in mind though, that I have various shoes that have this material incorporated into their upper and none of them have even remotely worn down. Then again, I haven’t worn them for any activity as rigorous as basketball. With those things being said, the durability of the upper on this shoe is simply questionable; the outsole is a totally different story. The outsole of this shoe is made from a rubber material but (and this will be discussed more in depth as we go through this review) it doesn’t last very long on certain surfaces. It’s very likely that the material degrades relatively easily if used for any hardcore activity on a ">rough surface. This is why it isn't suggested for the shoe to be used in this way.

As materials get softer, the level of protection the user experiences degrades. The upper of this remake of the AF1 is made from Flyknit and thus provides wearers with very little protection for their forefoot. One of the good things about the design of this AF1 is that it does provide wearers with what they need in regards to ankle support (the high top version of this shoe has an ankle strap that allows it to provide support for the wearer’s ankles). The padding on the forefoot and heel of the shoe are meant to protect its design from excessive wear as well.

The midsole of this shoe is full of surprises as well. As mentioned in earlier sections, the midsole of the AF1 variant is designed from injected Phylon foam; this material is incredibly responsive and basically absorbs the energy taken in while on is making use of the shoe. In addition to the responsive nature of the Phylon material in the midsole of the shoe, there is also an Air pod present in the heel. The Air pod, among the many things that it provides to it’s wearers, gives one that extra bounce on the heel and provides an added level of comfort to that area as well.

If you purchase a hightop AF1 Flyknit, you'll definitely receive the support you need. The midsole of the AF1 provides wearers with a fairly adequate level of support due to the use of both Phylon and the Air pod that’s featured in the heel section of the shoe. The midsole provides support because of the materials that are present and their ability to cushion and conform to the shape of the wearer’s underfoot. The upper also fits relatively snug-ly (Flyknit doesn’t stretch as easily as one would think) and supports the sides and heel of the foot; this is also in part because of the Flywire lacing that the shoe has.

When it comes to terrain, this shoe can be worn on all of them but not for rigorous activity. The design of this shoe has a softer outsole and wouldn’t necessarily keep up with the needs of a terrain such as an outdoor court. With that being said, it’s important to keep in mind that these shoes are meant for wear during casual events; while they are modeled after a basketball shoe, the use of Flyknit kind of rids the shoe of all functionality in that regard.

This is something to always keep in mind, a shoe designed from Flyknit will always be more expensive than the original model. This shoe has gone up significantly in price compared to the initial AF1 design. This is because of Nike's use of Flyknit for the upper as well as the new and improved midsole cushioning unit featured in the design. One thing about the higher price that this AF1 has is that they will definitely provide a level of comfort that somewhat justifies it. While they are incredibly expensive, one can definitely expect to receive their money’s worth from the AF1 flyknit.

Traction is another area that this shoe is somewhat lacking in. While the outsole of this shoe is designed from a rubber material, it won’t be able to stick well, if at all, to a surface of any type; this means that basically all functionality in regards to playing sports in the AF1 Flyknit is gone. One thing to keep in mind though is that these shoes aren’t really meant for playing sports; they are meant for casual wear.

Another great thing about the switch over from mesh in the design of the AF1 is that it provides wearers with a range of motion that far exceeds that provided by leather uppers. The Phylon midsole also bends relatively easily and has a noticeable level of give in both the heel and toe area; this is the cushioning material doing it’s job.

A shoe with an upper that provides as snug of a fit as this one is bound to provide wearers with a high level of stability. The AF1 Fly knit makes use of Fly wire lacing which allows the shoe to have a relatively secure feel when in use. One thing to note when purchasing this shoe though is that it runs a bit long so to get the best feel from the shoe itself it’s suggested that one orders it a half-size down.

No drop has been specified for this shoe but, AF1 has a habit of having a relatively low stack height. The design of this AF1 is one that provides wearers with what they need in terms of a low drop.

In all, the remake of the classic AF1 is a force to be reckoned with. The comfortable yet extremely stylish design allows it to be worn with various different clothing articles and for a relatively long period of time. Needless to say, if you’re looking for a casual shoe to wear it makes complete sense to check this one out.