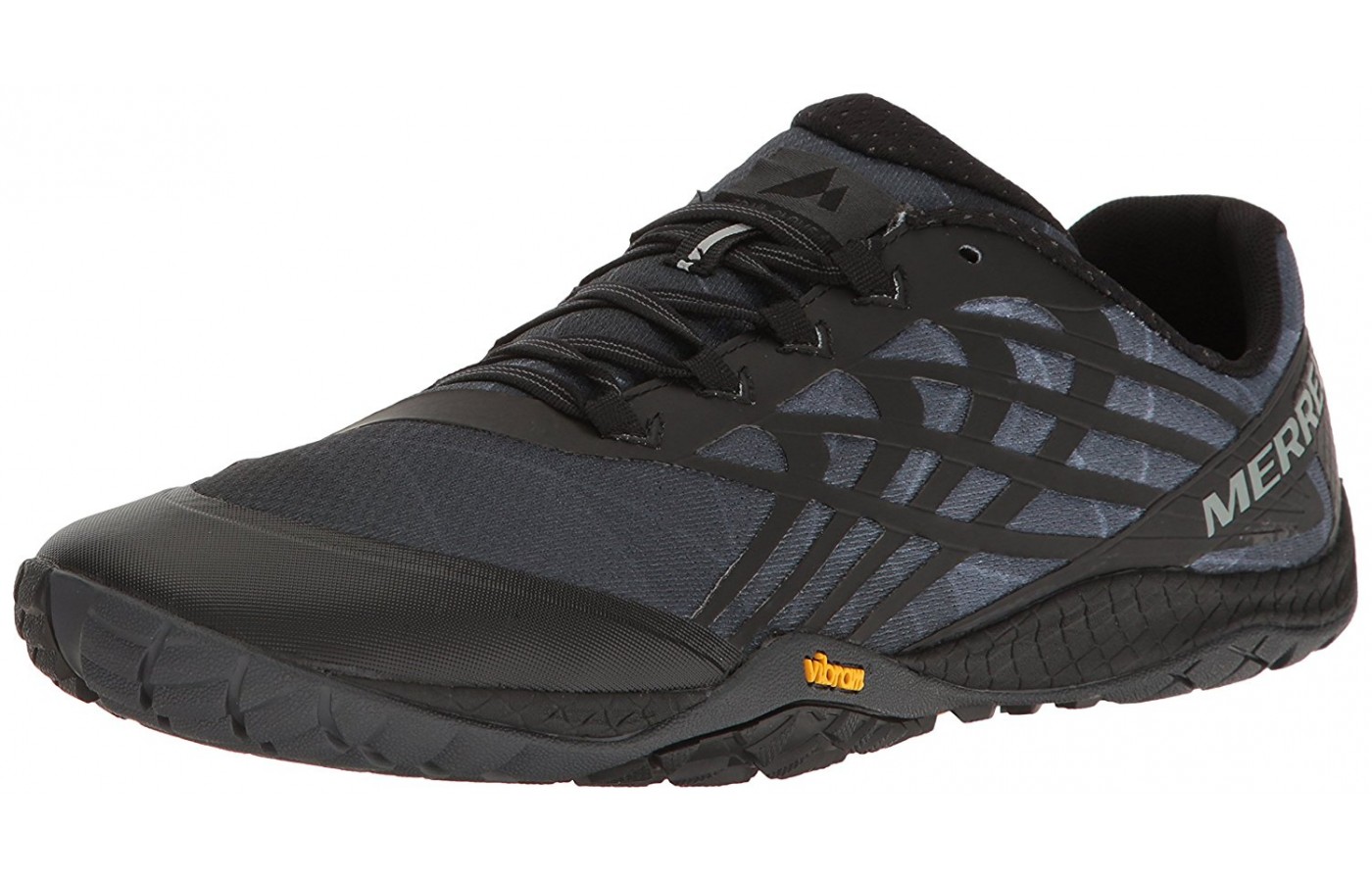 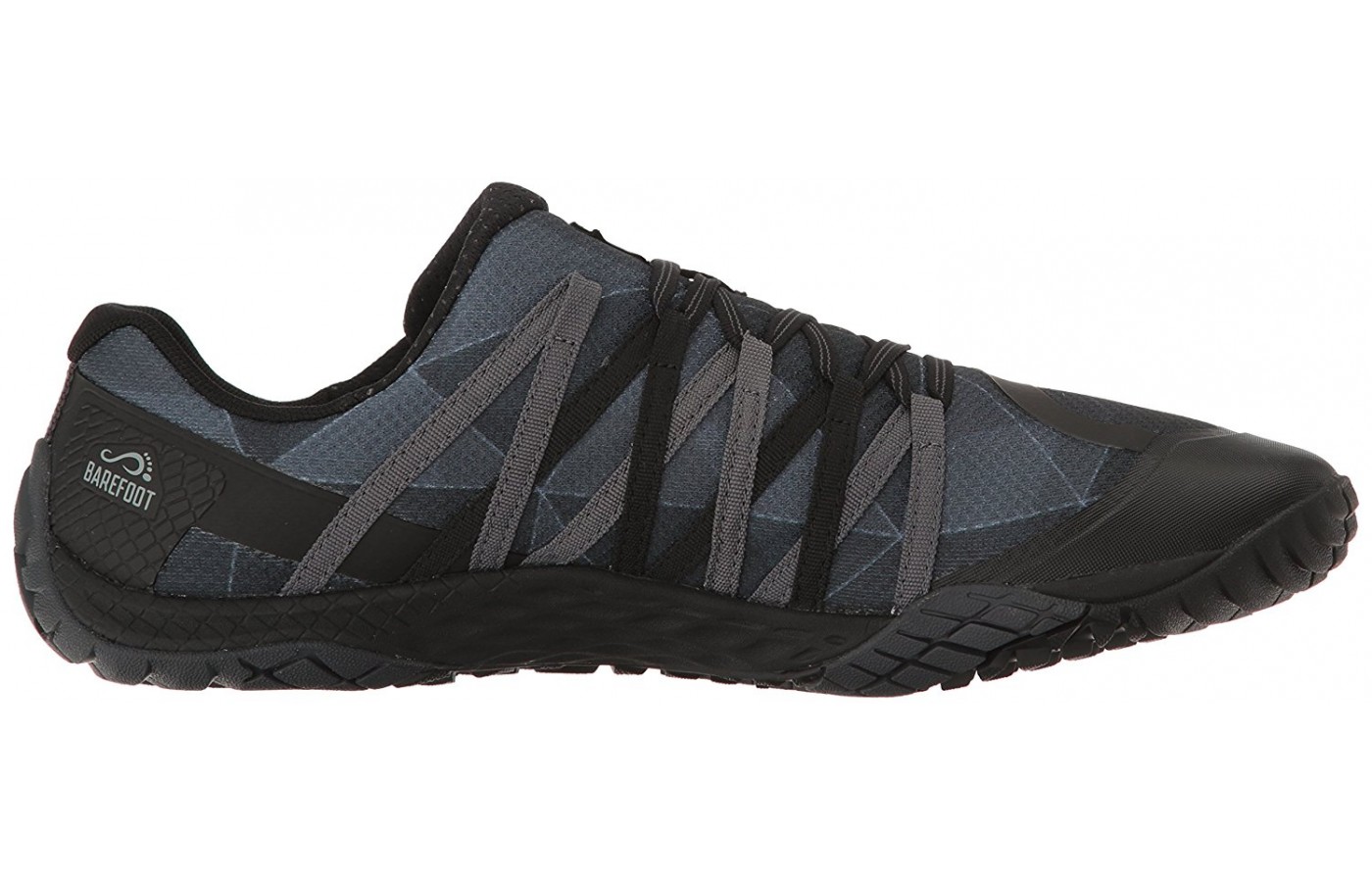 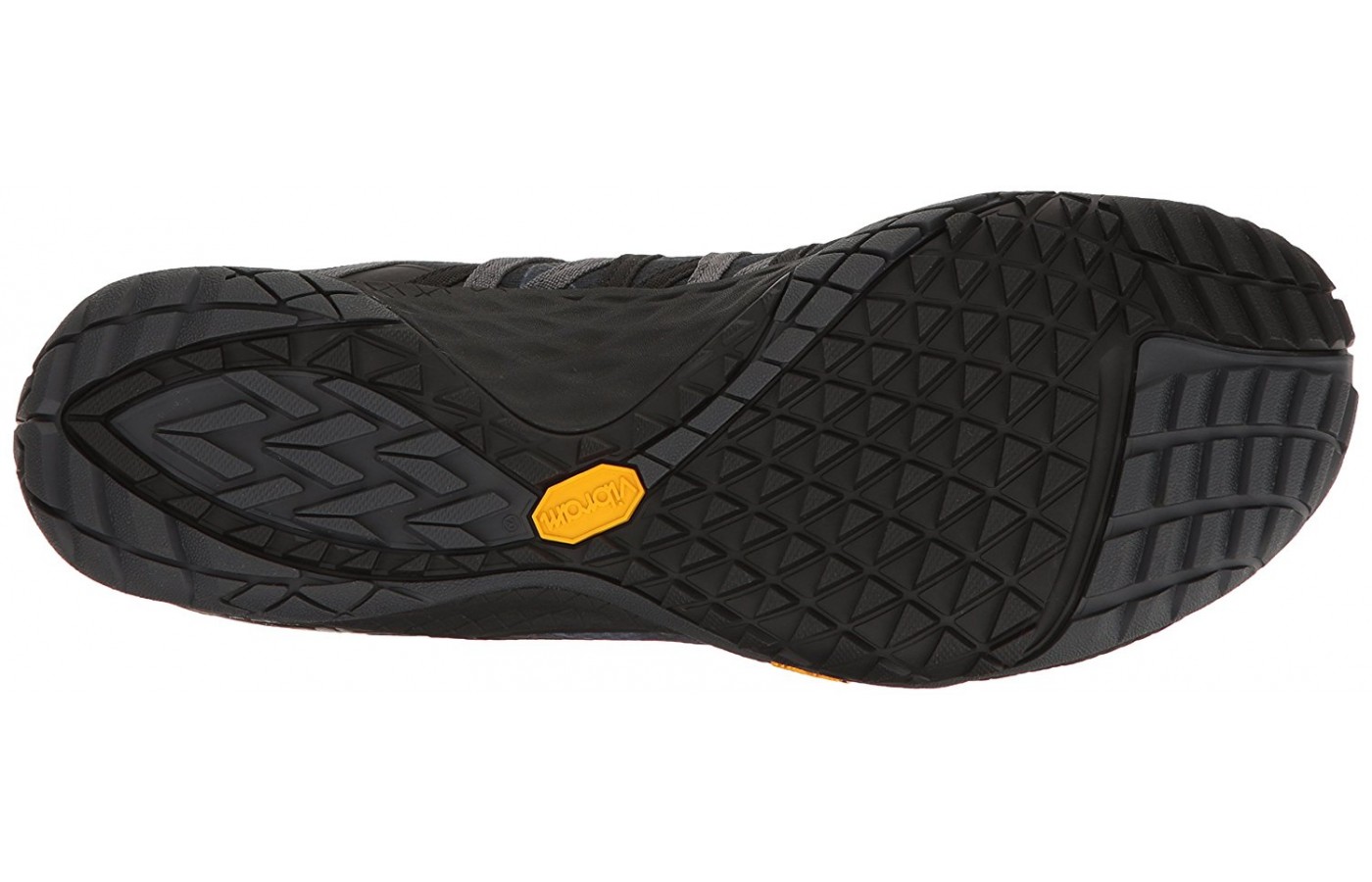 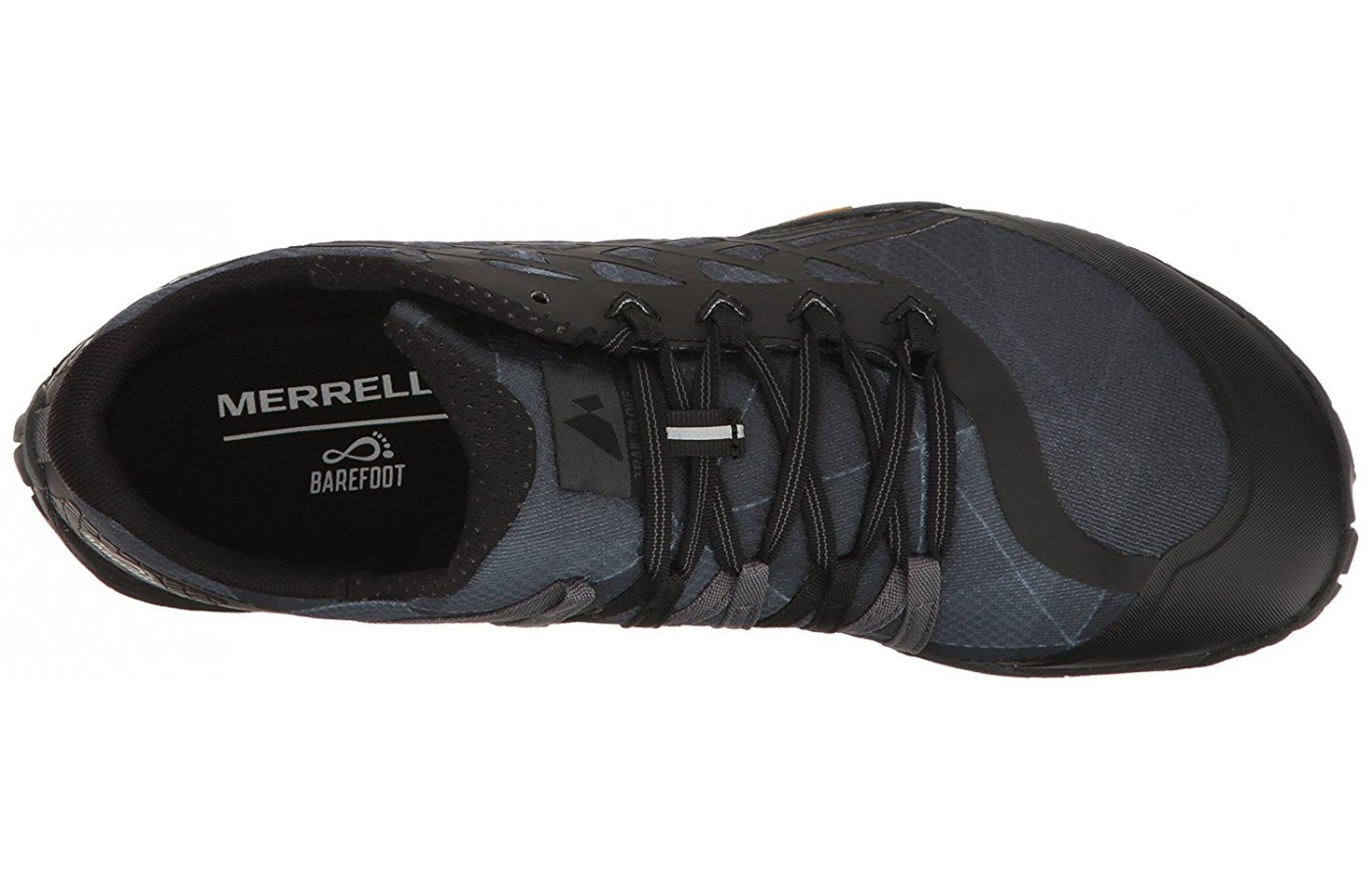 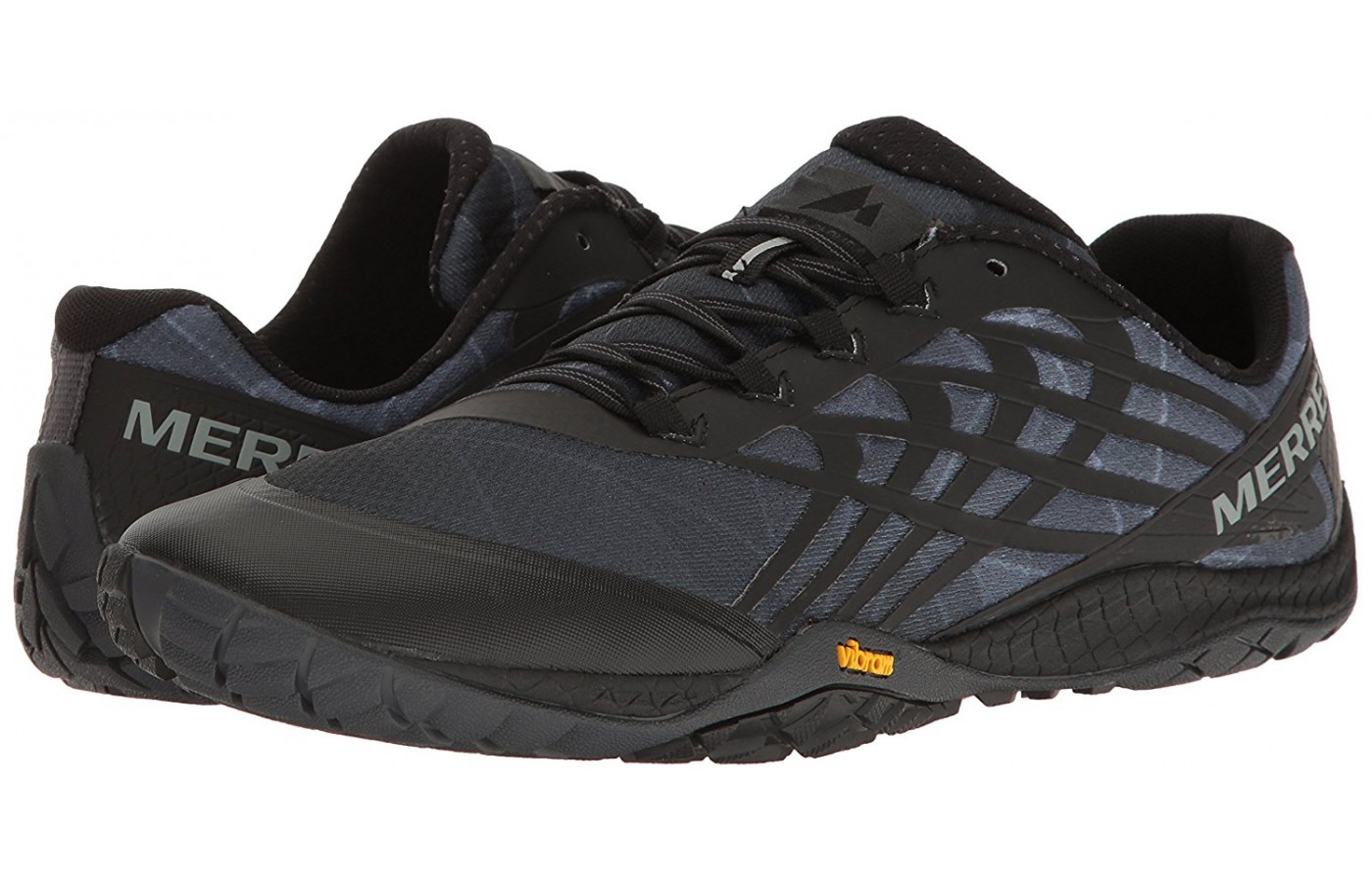 Okay, well if you’re looking for a running shoe that has both a sleek design and longevity, look no further than the Merrell trail glove’s 4th iteration. The shoe works extremely well on a variety of terrains and due to the lightweight design and the materials used throughout. The design of the shoe is one that simply screams “Wear me Barefoot!”; the shoe features a sock liner and flexible upper that makes this extremely comfortable for the wearer of the shoe.

The outsole of the Trail Glove is one of the biggest reasons why the shoe works so well on terrains such as trails. The shoe features a hardened rubber outsole that is fashioned into a distinct pattern that enhances the shoes innate flexing ability. The pattern on the outsole is somewhat raised to allow the shoe to achieve a higher level of grip on the rigorous terrains. It also allows the shoe to protect the bottom of the wearer’s feet from the effects of the ground that they are used to run on. Aside from this, the sole of the shoe is somewhat fashioned to model the bottom of the wearer’s foot. This is shown by the separation of the toes on the forefoot of the shoe.

The midsole of the shoe is constructed from primarily EVA foam. This design allows the shoe to provide the wearer with both a high level of responsiveness and comfort during use. The thin midsole of the shoe enables it to be extremely lightweight, resulting in quicker movements when the shoe is being used. The thin design of the midsole also takes away from any of the support provided by the shoe, making it relatively uncomfortable to use during the long runs.

The upper of Trail Glove much like the rest of the shoe is extremely minimal in design. The shoe features an upper designed primarily from an engineered mesh but with a few coverings placed here and there. The simple design of the upper of the shoe allows for a snug fit while being worn and promotes comfort for the wearer of the shoe. The shoe features an elastic lacing system that also benefits the snug fit that the shoe provides to the wearer. The interesting thing about this shoe is the tongue that is on it; the tongue wraps around the wearer’s foot while worn and aids in preventing the shoe from feeling loose during wear.

The material used throughout the Trail Glove’s design allows it to remain relatively lightweight when compared to other trail shoes. The shoe has an upper made primarily from a mesh material; the material is known for its porousness, a quality that also improves the shoe’s weight. The minimal sole unit ensures that the shoe remains lightweight as well. The shoe features an almost non-existent midsole. The lack of material in the midsole of the hoe and the rubber material on the outsole allows the shoe to remain extremely lightweight as well. Overall, the Trail Glove weighs approximately 9 oz, making it an extremely lightweight shoe.

The mesh make of the upper of the shoe allows it to provide the wearer with an extremely high level of air circulation during use. The shoe lacks any of the various overlays that are customary on trail shoes. The lack of overlays that are present on the Trail Glove 4 allows it to take in even more air-flow during use than the average trail shoe; this is done without any of the ventilation holes that are customary with running shoes. The sock liner on the upper also prevents the wearer of the shoe from dealing with any of the sweat that is usually taken in during runs.

The Trail Glove is a very comfortable shoe and that’s something being said about a trail shoe. The shoe’s mesh upper conforms to the shape of the wearer’s foot resulting in an extremely comfortable and sock-like fit for the wearer. The elastic lacing on the upper of the shoe allows it to provide the wearer with a snug fit, even more so than that provided by other models of shoe. The sole unit of the shoe is very minimal and provides the wearer with an extremely high level of comfort and responsiveness. The midsole and it’s EVA make while being relatively thin is very lightweight and provides a decent amount of cushioning for those short runs. Porous nature of the upper also provides the wearer with a great deal of comfort, primarily because of the lack of sweat build-up that results from it.

The Trail Glove 4 is one stylish shoe. The shoe has a very sleek design that allows it to blend in with the aesthetic desires of people nowadays; the design is very minimalistic, making it visually appealing. Merrell designed the shoe in various colorways, giving the wearer of the shoe a variety of choices to choose from. The sole unit of the shoe is thin as well, while this may not help the shoe in functionality, it does add to the aesthetic appeal of the shoe. The elastic lacing gives the shoe a bit of flair that otherwise wouldn’t have been present in the shoe design.

The surprising thing about the design of these shoes is that the materials are extremely durable. Despite being thin and minimalistic by nature, the Trail Glove can withstand a very high level of abuse on various terrains. The sole unit of the shoe, primarily the outsole, I designed from a hardened rubber material that holds up very well on several surfaces. The wearer of the shoe should be able to get several hundred miles out of these shoes before having to worry about finding a replacement. The Midsole is relatively non-existent, which shouldn’t serve as an issue for the wearer of the shoe simply because the shoe wasn’t designed to be worn for extensive use, it’s a trainer. The shoes upper doesn’t last as long as the sole unit of the shoe simply because it’s designed primarily from a mesh material. Another thing to note about the shoe is that it, if worn on terrains such as roads, will wear away much faster than if it is used on the terrains that it is designed for use on.

The Trail Glove has very little in the way of protective features in certain areas. The upper on the shoe is designed from mostly mesh and doesn’t provide the wearer with much in the way of protection because of this. The lack of coverings on the mesh material results in a shoe that doesn’t do much to protect the upper portion of the wearer’s foot. The sole unit of the shoe is actually where a decent amount of the protection provided by the shoe comes from. The sole unit is fitted with a Trail Protect pad that works to limit the possibility of material from entering the inside of the bottom of the wearer’s shoe. This, in effect, is where the majority of the protection comes from mainly because of the lightweight design of the shoe as a whole.

The shoe provides very little support to the wearer. As mentioned earlier, to enhance the natural feeling of the Trail Glove, Merrell limited the majority of the cushioning added. The shoe has an extremely thin layer of padding that acts as the midsole of the shoe; this severely limits the shoe’s ability to provide support for the curves of the wearer’s foot during use. The upper is also cut very thin and stops far below the ankle. This results in no ankle support being provided and very little possibility of support for the upper of the wearer’s foot during use. Keep in mind that the shoe is meant for shorter runs, so the level of support provided to the wearer wouldn’t necessarily be as important.

The Trail Glove 4 is designed for use on the more natural feeling terrains such as trails and the like. The shoe has lugs that act as the main source of grip to the shoe; the lugs do best when used on areas of varying intensity, terrains such as roads and the other more constant, developed terrains will cause the lugs to wear down rather quickly.

For the functionality provided, the Trail Glove 4 provides a fair level of value. The shoe is priced midrange, making it very affordable. When the price of the shoe is considered alongside the fact that the shoe functions very well as a barefoot shoe and is versatile in it’s make, it actually seems rather low. Overall, if what is sought is a lightweight shoe the provides a fair level of responsiveness, then it makes sense to seek out this shoe.

Merrell did something unique with the positioning of the lugs on the outsole unit of the shoe. The lugs on the shoe are designed in such a way a to allow the shoe a high level of functionality and grip during use; they are multidirectional, resulting in a higher level of coverage and less slippage when the shoes are being used for the more strenuous activities. The shoe doesn’t handle too well on the surfaces with less friction because of the small area that is covered by this barefoot shoe.

To provide a sense of security to the wearer of the shoe, Merrell featured several technologies on both the upper and the sole unit that work to improve the overall feel of the shoe. The upper has elastic lacing that works to provide the wearer with a snug fit while worn; The mesh also functions in much of the same way. The upper also connects to the upper using TPU material, restricting much of the movement felt by the shoe while in use.

A great thing about barefoot shoes such as this is that it has no drop whatsoever. Barefoot shoes improve the natural feel of the shoe by having very low heel-to-toe ratios. The low drop, coupled with the responsive materials used in the design of the shoe works to make the shoe both comfortable and functional.

Overall, for a barefoot shoe the Trail Glove doe a great job of providing functionality. The minimalistic design of the shoe makes it both lightweight and flexible increasing the ease of use of the shoe. The upper of the shoe fits relatively well, providing the wearer of the shoe with a snug fit and resulting in snappy movements. The sole unit of the shoe also works very well to provide the wearer with a high level of functionality. To top all of this off, Merrell did a very good job of making the shoe extremely visually appealing. 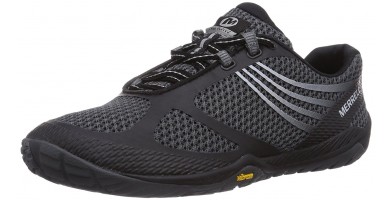 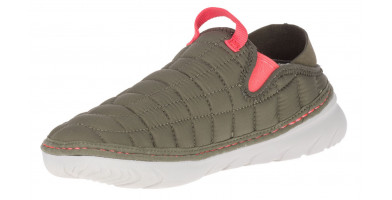 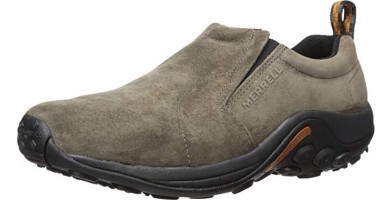