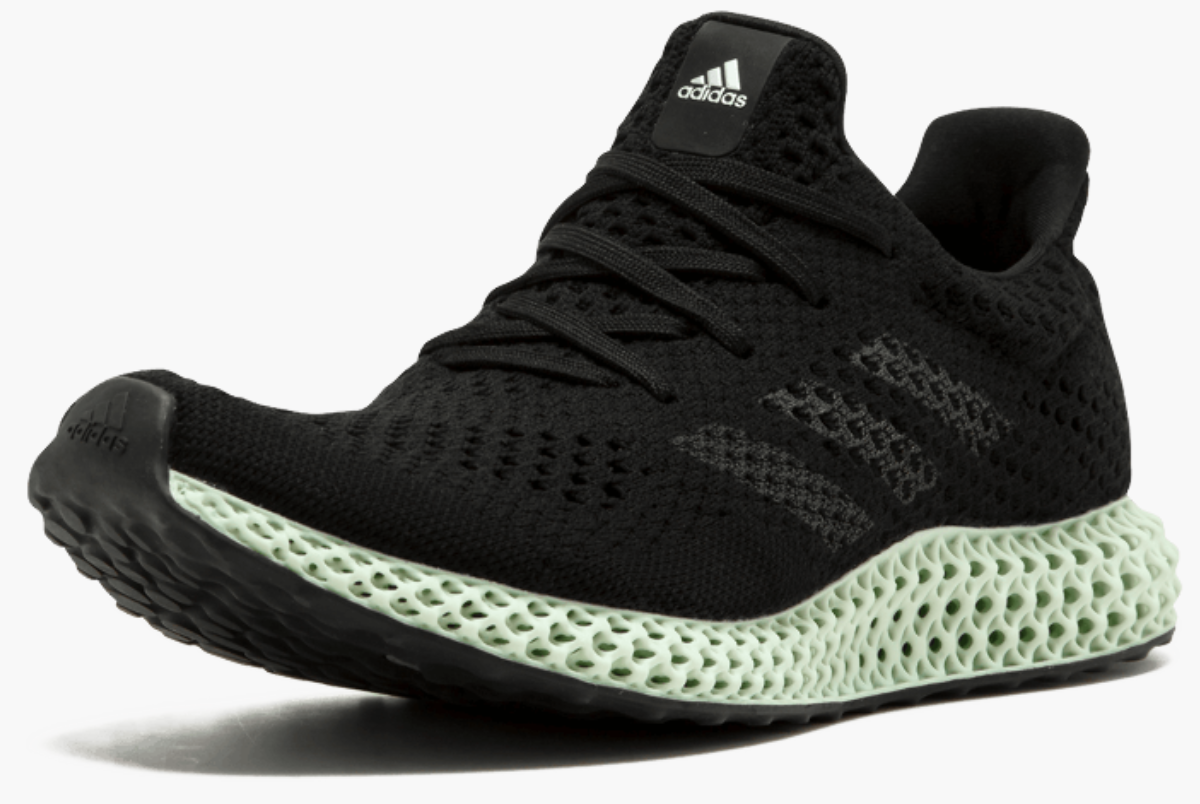 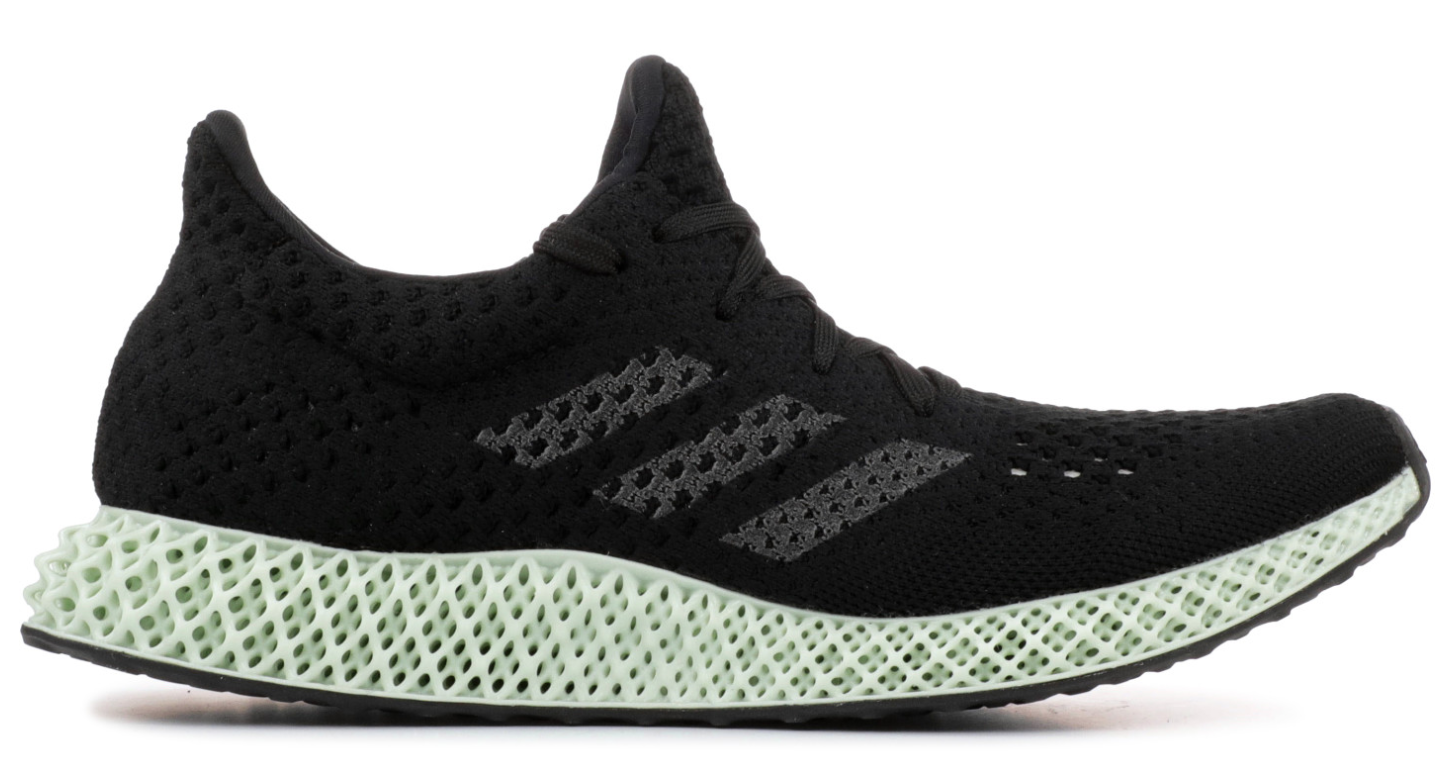 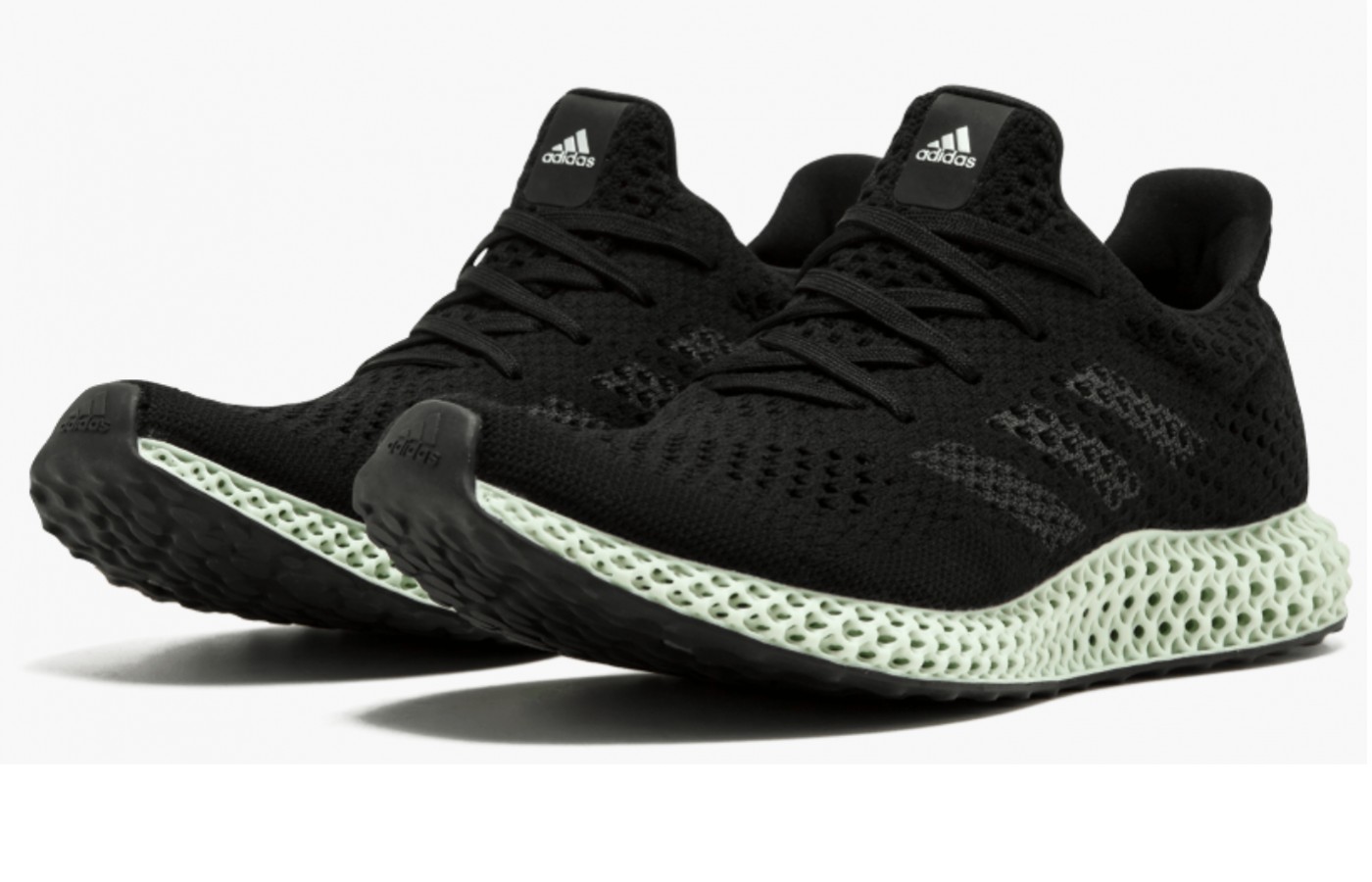 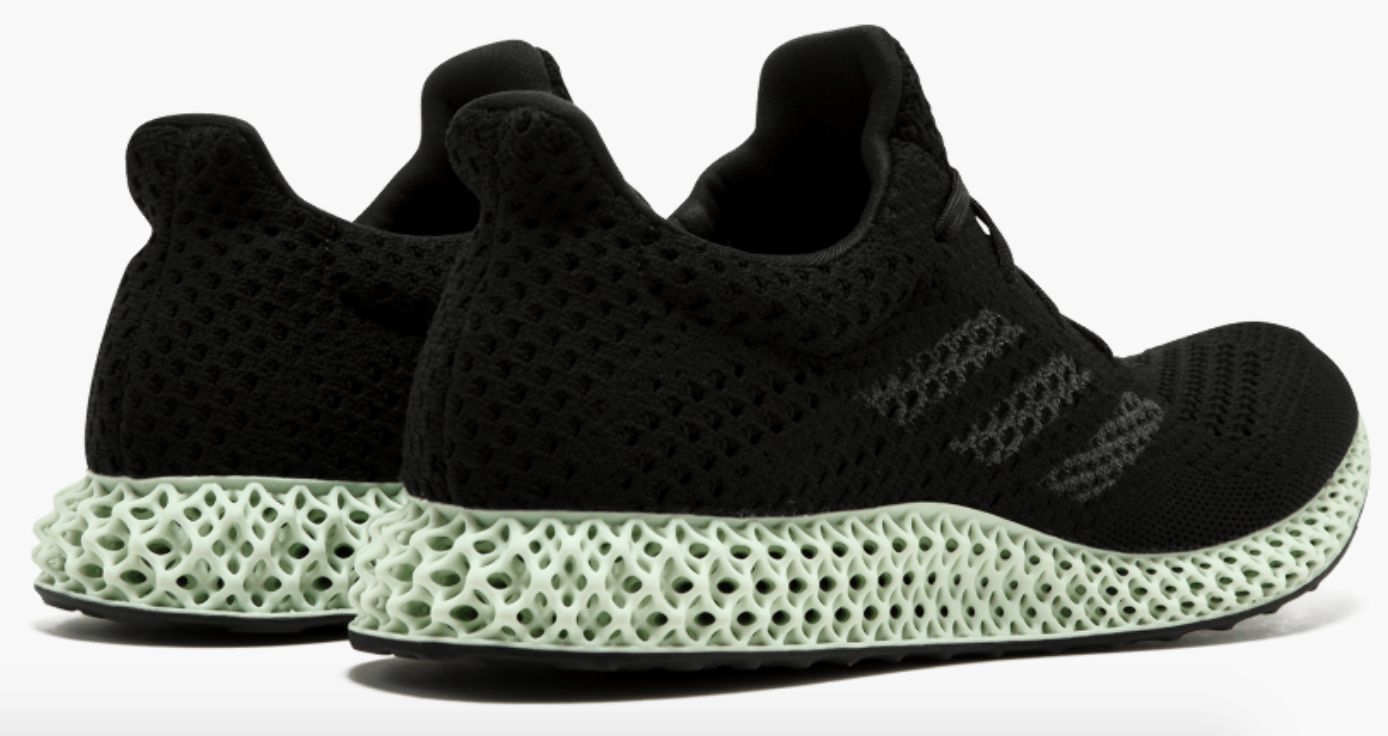 9.0
9.0 score
(WalkJogRun) score (9.0)/10
Our WalkJogRun score is based on 3 different factors: Editor's rating after in-depth testing. User ratings submitted on this page Overall score from the "reviewmeter" based on reviews across the web the weight of each factor is: 40% editor rating 15% user ratings 45% reviewmeter.
2
Editor rating: 8.3 / 10

I can assure you that you’ve never seen a shoe quite like the Adidas Future craft 4D. This shoe is Adidas' answer to those who have been seeking something that is unique, comfortable, and full of functionality. Incorporated into its design are various cushioning features as well as concepts that have never before been seen in a shoe before. The cause of the uniqueness that this shoe provides is the midsole; no shoe producer has ever before been able to design a shoe with a 3D printed midsole. This, along with various other unique features is what allows this shoe to provide wearers with the (for lack of a better word) extreme feel that it has. Read our detailed Adidas 4D review and decide for yourself.

We have spent 3.6 hours analyzing a total of 400 reviews.

Positive
Read more
Negative
Read more
Reviewmeter
The Reviewmeter shows you an overall score that you can easily refer to. The highest rating is 10 (100% positive feedback)
Of the 400 reviews we found in total, 6% were negative, and 94% were positive.
9.4
1
5
10

This shoe is definitely of the more durable variety. The design of the outsole on the Adidas FutureCraft 4D is made of Continental Rubber. This material is the brainchild of both Continental Tires and the designer, Adidas and resulted from Adidas recognizing that there was a need for a more durable rubber material to be placed in their outsoles. With that being said, the outsole is made of a rubber with the same consistency of rubbers that are placed in bike tires. The use of this rubber also gives this shoe a bit more grip than that experienced by the average running shoe.

The futuristic look isn't just for show and actually results in the shoe having a higher than average level of energy return. One look at the midsole of the shoe you see various porous features, which does help to explain the bounce that one feels as they run in it. The funny thing about the midsole of the Adidas 4D is that while the midsole does look to be 3D printed, it actually isn’t. The midsole of the shoe is designed from a resin of Adidas own design that they heat up then mold, slowly allowing it to cool over time.

The upper of the shoe is designed from a Primeknit material as many of the more expensive Adidas shoes are. The use of this material gives it the airflow that they need as well as the space that they may need in terms of expansion in case the toes swell up during a run. The cool thing about the upper of the Adidas Prime Knit 4D is that it actually doesn’t have any overlays in place in the design which is helpful for keeping the shoe's appearance minimal. As for lacing, the shoe makes use of lacing that goes directly into the fabric of the upper (there are no eyelets in place).

To keep the shoe’s design relatively lightweight, it makes use of minimalism in its design; the lack of overlays in the Futurecraft’s design means that it won’t weigh very much on the foot. The porous nature of the material in the Futurecraft’s sole unit is also a great contributor to the shoe’s lightweight nature; unlike most foams, this shoe has various holes in its sole unit. The fact that the resin used to print the midsole is relatively lightweight, allows this shoe to be what wearers would need in order to fully provide a lightweight overall experience.

The Primeknit upper of the Futurecraft was definitely made with the foot and the likelihood of a compilation of sweat occurring, in mind. The design of this shoe features various holes in the toe box and sides; these are in place in order to provide the wearer with what they need in terms of airflow and to ensure that sweat doesn’t simply stick to the inside of its design. Another cool thing about this futuristic shoe is that it makes use of holes along the heel of the shoe as well a lining in on the inner region; these ensure that wearers have what they need regarding comfort and security.

While the material in the midsole of the shoe is definitely incredibly comfortable, it doesn’t provide the highest level of comfort to the foot. That is simply to say that the shoe doesn’t have the cushioned feel that various other shoes of its kind provide. The upper of the Futurecraft however, is meant to provide an incredibly comfortable feel to the foot of the wearer. The sock-like feel, as well as the air holes in the side of the foot, enable this shoe to provide wearers with what they need in terms of comfort and security for an adequately long period of time without worry.

Another area that the Futurecraft simply excels in is that of style. The shoe closely resembles several of the various different lifestyle Boost sneakers that have been made by Adidas; they all have a slim design and the thicker than normal midsole area. The cool thing about the design of the Future craft is that it can be worn almost anywhere. It can be worn with both athletic gear, as well as with various different types of casual clothing. The best part about all of this is that regardless of what you wear with these sneakers, individuals who see them will automatically wonder what it is that you have on your feet.

The continental rubber that lines the outsole of this wonderful shoe will definitely do the trick in terms of keeping it looking lively. The main reason why this material was created in the first place was so that the longevity of the material would improve and it would be able to consistently provide wearers with a sense of grip; it does just that. The primeknit upper, on the other hand, is very thin and doesn’t last anywhere near long enough to provide wearers with a real sense of longevity. With that in mind, as long as the shoe is kept out of harm’s way and experiences areas that open it up to minimal use, it will last for a reasonable length of time.

Again, protection is relative to the activity that the shoe will be used for. These are minimalist running shoes, so you can’t really expect it to provide one with all that much protection. The upper is made of primeknit and has very few overlays; the utter lack of overlays is one of the main contributors to this shoe’s inability to provide wearers with what they need in terms of security and protection. On that same token, the entire shoe seems to be porous (full of holes, so to speak) meaning that it won’t provide any level of security in regards to liquids entering the shoe’s design either.

While the outsole on the shoe won’t provide the same level of comfort as that experienced by say, a Boost shoe, it definitely gives a higher than average level of responsiveness to the wearer during use. This can be said to be because of the firm nature of the material in the design of the midsole; the resin, when it hardens, gives snaps back as pressure is placed onto it. The resin’s ability to snap back when pressed on is noticed by the midsole of the shoe and its ability to give wearers what they need regarding responsiveness when in use.

This may actually be kind of hard to believe since it was just said that the material in the sole unit of the shoe is a bit firmer than that of foam midsoles but, the midsole of this shoe is actually very supportive. The midsole is ergonomically designed to be ergonomic and blend with the curvature of the wearer’s underfoot. The cool thing about what Adidas did with the midsole of this shoe is that they said that someday in the future, they plan on making it so that wearers would be able to get shoes made (in store) that blend directly with the support that they need for their foot.

The material in the outsole of these shoes is made to be able to function on a variety of terrains without experiencing wear issues. These shoes function best when used on road terrains though; the design that they have actually screams that they have a need to be used on a road. They have a slim-lined upper design and, due to them being lightweight, function very well to give wearers what they need in terms of security.

There is no doubt about it, these shoes are definitely expensive. You can’t really expect anything more from them, it makes complete sense for them to sell for the price that they do. In addition to this, the outsole of the shoe is made from their signature Continental Rubber material; seeing how this material stemmed from a collaboration with a major tire retailer, it makes sense for it to be as expensive as it is. The good thing about all of this is that all of the things that make up this shoe come together to be something great, the Futurecraft 4D. This shoe will definitely turn heads and give you a somewhat “different” experience while doing so.

You have an outsole made of Continental rubber, what do you expect for it to do. The design of the sole unit on the Adidas Futurecraft 4D provides wearers what they need in terms of grip due to the naturally “sticky” nature that the material has. On a road surface, wearers will definitely be able to feel the shoe’s need to stick to whatever surface it is that the shoe is being worn on. The funny thing about the outsole on this shoe is that it doesn’t have any patterns; other than the slight raises of the material, it does still grip incredibly well.

If purchased in the correct size, these shoes will definitely deliver a fit that provides them with what they need in terms of stability. The lacing on the upper of these shoes and the way that they directly into the shoe’s upper allows them to have what they need in terms of stability when in use. This stability stems from the fact that the lacing pulls directly at the fabric instead of being controlled by the eyelet featured in the shoe’s design The firm, 3D printed midsole in the shoe’s design does give it the security that it needs in order to feel secure when on foot. The great thing about the Primeknit upper is that it doesn’t feel shifty in the way that other mesh uppers do; it fully provides a stable feel when worn. 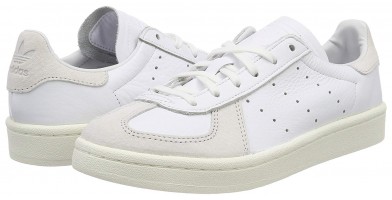 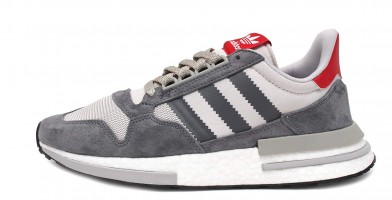 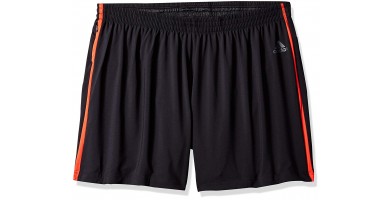