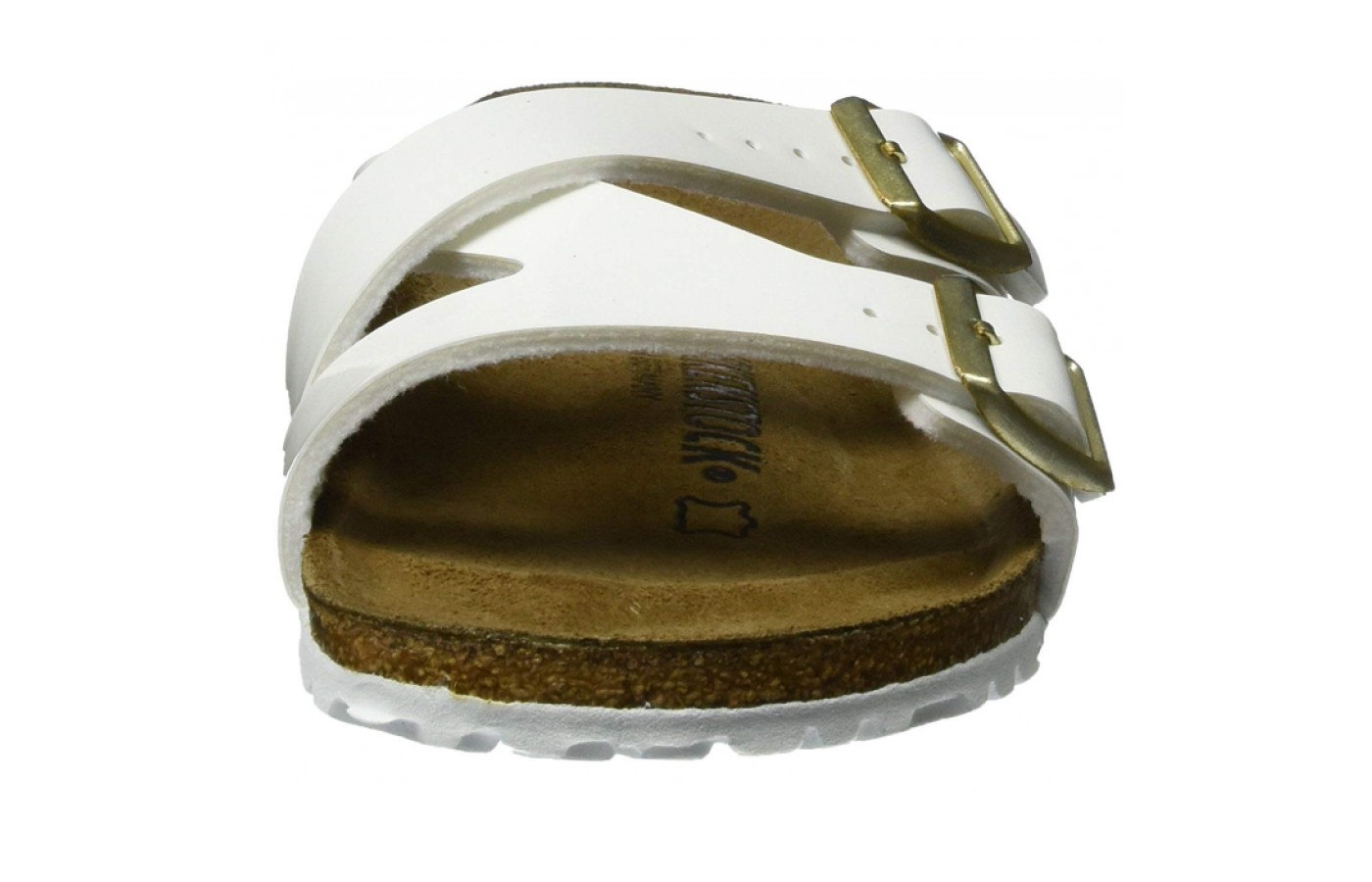 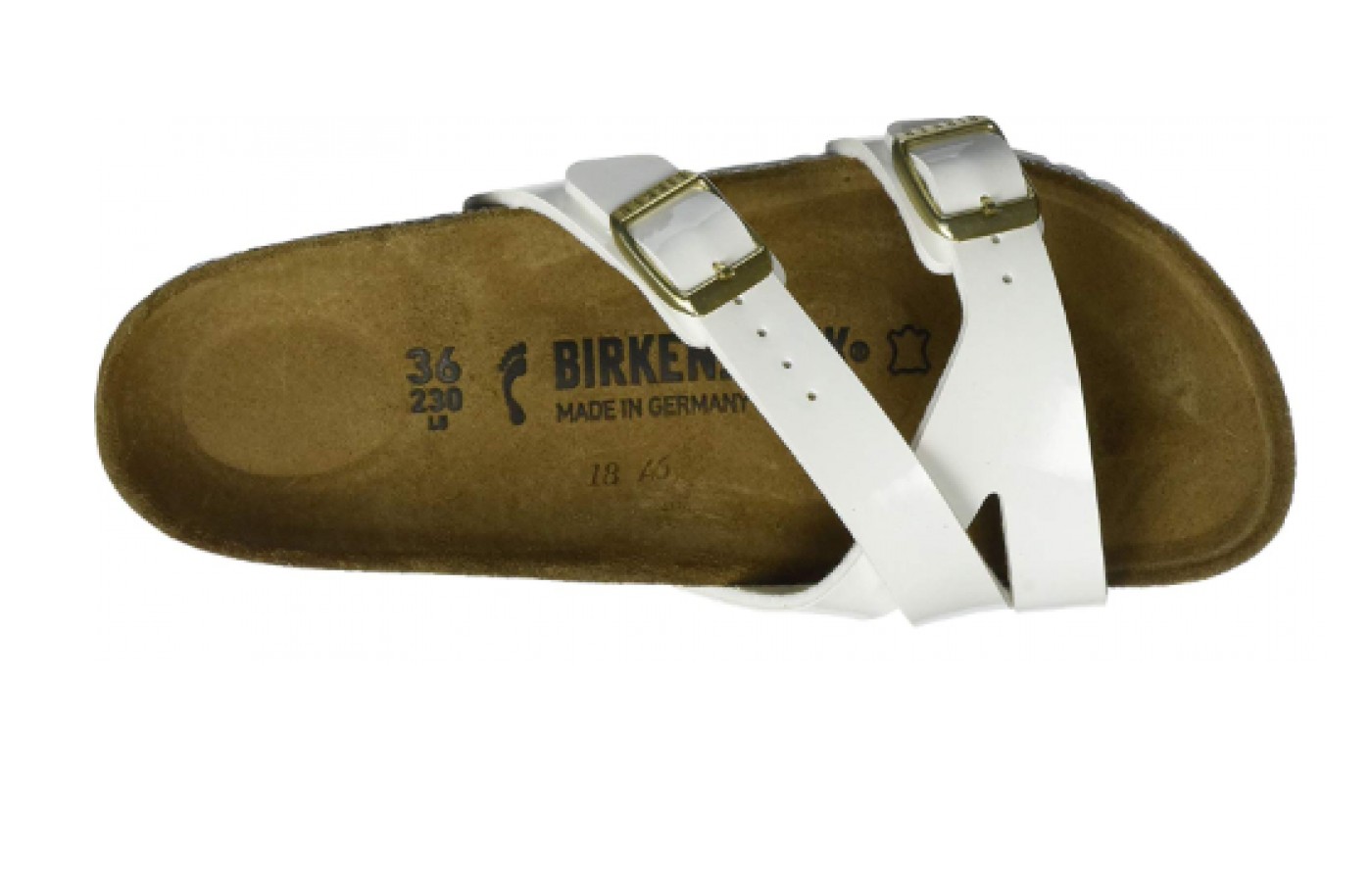 Birkenstock is one of the oldest companies in the world. Seriously. Its origins can be traced all the way back to 1774 when Adam Birkenstock, registered the brand in the local church archives.

Years, later his great-great-grandson, Konrad Birkenstock made an improvement when he developed the first contoured insole, and in that very same 1896, he opened two stores in Frankfurt, Germany. Back in the ’60s, the Birkenstock shoes were first introduced to the American market, they quickly became a cultural phenomenon.

Along with the Cultural Revolution, they quickly became popular with the youth of the era, and therefore the symbols for the American liberalism. In other words, the rebellious Hippe teenagers of the ’60s and ’70s loved them because through wearing the Birkenstock shoes they showed off their rebellion. That popularity has only grown in the ’90s and the start of the New Millennium and they enjoy a cult-like status now.

Say hello to the bone pattern outsole. It’s a characteristic pattern on the Birkenstock Company, and it’s been a staple for any slip on Birkenstock shoes. The Birkenstocks Yao soles are punched from EVA plates and attached to the bottom side of the footbed by hand. A very strong solvent-free adhesive that is activated by heating it is keeping them together, and the adhesive makes sures that they stay together for a very long time. The outsole have very good cushioning properties and are very flexible, but also support the natural rolling motion of the foot. The soles are also nice and light, and they don’t burden the feet, when you’re wearing the sandals. Also, they’re extremely scuff-resistant and durable, and you’ll be wearing them for a long long time after you buy them. As a result of their durability and the anatomical properties that they have, they don't wear down more on one side than the other of the sandal. This prevents posture problems, and ensures their longevity.

The soles serve a fashion purpose and a practical purpose. In some the Birkenstock Yao, here’s also an exciting contrast between the sole and the upper material by choosing different colors. This style is also known as color blocking, and you’ll love it in these sandals. It works so well. The outsoles are available in more than 30 different colors, in addition to classic white, brown and black, and you’ll be able to choose from a wide selection of colors. Oh and they're also available in camouflage pattern if you’re into that particular style.

Now if you thought that the outsole was impressive, you haven’t read anything about the midsole. If you take a good look at the company’s description of their famous footbed, the first thing that you’ll read is that nothing compares to it. Nothing. And Birkenstock in not joking about that. There are 8 different properties listed on the Birckenstock’s official page that only explain the midsole of the sandal. Yes, eight and be prepared, you’ll be amazed by every single one of them.

The midsole is anatomically crafted to ensure the maximum comfort to every inch of your foot. It gives you plenty of room to move your toes, and
to have the feeling of relaxation. That area also has a raised toe bar that encourages natural gripping motion of your toes, when you’re actually wearing the sandals.

Oh and the entire footbeed is contoured. Yes, the footbed is equipped with four separate arches that ensure equal weight distribution and thus proper posture of your entire body. The deep heel cup cradles the heel with the help of the natural cushioning right below the heel bone. You’ll be able to feel that cushioning with every step that you take, and combined with the rest of the anatomically crafted midsole they make a great supportive team for your feet.

The entire midsole has shock absorbing properties, and the entire sole is flexible, lightweight and so durable. You will be able to feel that midsole, and you won’t get back to any other sandal after trying on the Birkenstock Yao. The double jute fibers have double duty in these sandals. The one layer wicks away the moisture while the other and strength to the shoes. And let’s not forget. The footbed of the Birkinstock Yao is also equipped with cork and latex mix. The cork is firma and very resilient material that ensures maximum support, while the latex makes sure that there is a dose of flexibility in that footbed. And last but not least, the suede liner of the footbed ensures that your feet glide easily while wearing these shoes.

Oh the simplicity. Seriously. While some of the models have a more pronounced and thicker upper. The simplicity of the Yao is what gives their shine and classic feel. The upper is solely made out of three thick straps. Two of the straps in the Yao sandal are adjustable and they’re hold together by a third strap in an X style pattern that provides a bridge between the stripes and the rest of the shoe. Oh and the entire sandal is hold together by a buckles that you can adjust to your feet dimensions. It’s that simple. No special zippers, no Velcro no other stuff. Just simple yet practical adjustable buckles on a very simple thin strap.

Oh but the variety of colors in the outsole was mentioned, you should know that that variety also applies for the materials used in making of the upper. Smooth, oiled, waxy, nubuck, leather are some of the offerings in the Birkenstock Yao model, and it also come in synthetic upper materials like Birko-Flor and micro fiber and Polyurethane. They’re a more water-resistant version of the all-natural materials, and of course a lot cheaper.

The Birkenstock is known for making comfortable footwear, and it’s the first thing you’ll be able to feel while wearing them. Immense comfort that won’t leave you for hours and hours. The entire midsole is responsible for delivering that comfort, but for the most part it’s all because of that raised to bar and neutral heel profile. Combined together they give the most brilliant comfort any shoe could give.

What is to be said of the support of the Birkenstock Yao? The entire midsole is a support heaven for your feet, but the outsole is not looking 9and feeling) bad either. The EVA outsole fused with that highly durable and fantastically designed midsole do work their magic in providing the support during the entire period that these sandals are on your feet. One hugs your feet from within, and the other from the outside of the sandal. A perfect duo that provides the perfect comfort.

We’ve said before that a shoe is durable on the basis of the materials, the design, the technology that went into making the shoes, but this shoe is a bit different. It has a cork footbed that is removable and renewable. Think about it like this. If your car breaks down and doesn’t work properly. Would you throw it away entirely? Or you’ll be able to fix the problem by removing and replacing the bad part with a new one? It’s the same with the Birkenstock shoes. Every type of shoes, not just the Yao model. If buy any change your wear the sandals down, you can easily replace the damaged part and wear them again. Isn’t it amazing?

Oh and that same cork footbed mentioned earlier has a little bit of latex in the blend that provides a huge dose of flexibility. Youd be surprised from the amount of flexibility that the Yao model has, despite looking so sturdy and stabile.

Frankly there isn’t part of the Birkenstock Yao that doesn’t allow stability. The entire sandal is one stabile structure that just fills you with comfort and security. The multiple layers and materials used in the midsole, or the EVA based outsole. You’d be supposed from the amount of stability that this model has, and will have for a long time. Even the buckles on the straps offer some of the stability they secure and position the straps in order to get a better grip of your feet and to make it a little more stable while it’s in the sandal.

The Birkenstock Yao model is a slip on sandal that has three straps in the upper, so the bigger part of your feel will be aerated. But the two layers of the jute fibers, really wick away the moisture and keep your feet dry.

Because of the EVA outsole, the Yao model is suitable to be work on any type of terrain, and I any type of weather. This particular model is a summer type of sandal, so the sandals will be exposed to several types of weather conditions. The summer heat, the summer rain and everything in between.

The bone patterns of the outsole take care of the traction. They’re shaped in an interesting but very practical pattern that just gives a great look and keeps you safe from slipping. How cool is that?

The very simplicity in the style is very familiar with the German lifestyle. They value practicality above else, but the style is not to be dismissed. It’s so elegant, simple and it gives the show some classic quality that just works with almost every item in your wardrobe. The Yao model is versatile, and elegant. It can be styled in different ways, but the shoe itself won’t let you outshine the rest of you outfit. The three straps are positioned in an interesting, yet understated way, and the buckles on them are barely unoticable. They provide great support to the feet, but they also serve a great purpose of being almost like an embellishment. Because the straps in the upper don’t have any other detailing they’re both stylish additions to an already great design and a practical future that ensures your feet are gripped and secure.
You won’t find a simpler and elegant style of shoe, and the Yao model is really a source of pride for the Birkenstock Company. The German pragmatic way of living and their great engendering is transformed into a great looking and very comfortable shoe. A shoe that can be renewed and made more durable with just removing one part of it. How many other sandals can say the same?

The Birkenstock Yao model is one of the best. It combines the simplicity of the design, the quality materials and the comfort of a great anatomically shaped sandal. The upper comes in variety of materials, while the midsole can be replaced after prolonged wearing and tearing. The elegance that is exurbs, is only excelled by the comfort and the stability that it offers to the feet. The Yao model comes with a leather and vegan upper version, while the several futures of the midsole make it highly durable, flexible and comfortable.

The company however warns that because it contains cork, the sandals mustn’t be kept under direct source of heat, or even out on the sun for too long. The heat has a potential to damage the material and the entire shoe in a short amount of time. However if that does happen, that very same part of the midsole can be easily replaced with a new one, thus , making the Birkenstock Yao one of the most practical and beloved sandals in the entire company’s collection. You will be able to feel the comfort with every step.