The Sneakers the Dinosaurs Should Have Been Wearing 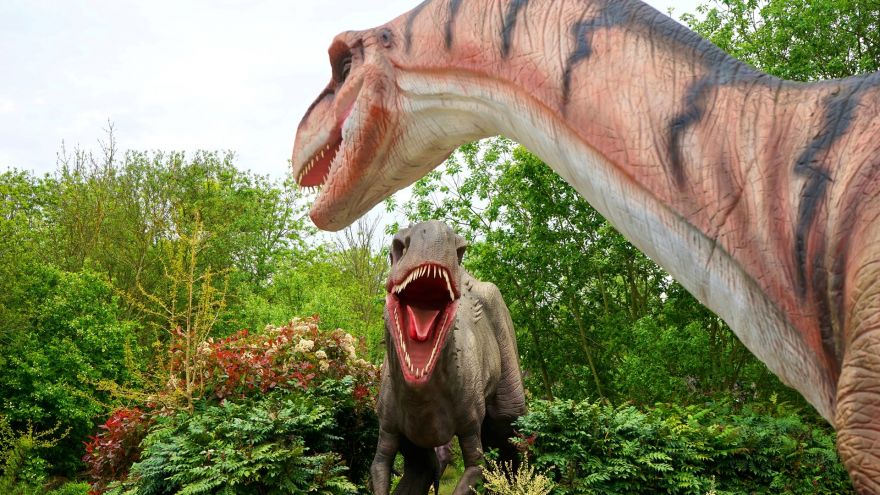 The Sneakers the Dinosaurs Should Have Been Wearing www.walkjogrun.net

Did the dinosaurs get wiped out by a meteor or did Jesus just get sick of them stomping around?  Until we invent time machines, we may never know for sure.  But what we do know is if the dinosaurs had better shoes, they might’ve toughed it out and kept us all hiding like in Jurassic Park.

Tyrannosaurus Rex:  The T-Rex had tiny hands, but gigantic feet.  This hungry predator needed a pair of Brooks Adrenaline GTS 19’s for overpronation to keep gobbling up the smaller dinos.

Stegosaurus: Had lots of cool plates and would’ve needed four shoes to stomp around.  A couple of pairs of Zhuanglin Aquas with Solyte midsoles, water grip and rubber outsole would’ve been helpful.  Then maybe the stomping wouldn’t have been so loud.

Triceratops:  This classic dino that looks like an elephant got mixed up with the DNA of several rhinos.  It would probably need a good running shoe for charging.  The Ghost 11’s have great arch support and are perfect for the giant, wide feet.  Just don’t stand in front of it or behind it or anywhere near it at all.

Mamenchisaurus:  The giraffe of the dinosaurs had a really long neck and not much else going for him.  Oh sure, he could reach the leaves in the tall trees, but what about running away from predators?  Whatever shoes it picked to wear, it couldn’t go wrong with SOLE Solftec Ultra-U insoles with thick cushion made from recycled materials.  Of course, back in dinosaur times, nothing had really been cycled yet, let along recycled.

Dilophosaurus:  This dino was probably already in a bad mood, as the other reptiles would make fun of those giant fins on its head.  To run away in shame as fast as possible, it needed a pair of Saucony Showdown 4’s for track.  With their secure lacing system and flexible overlays, the other dinosaurs would be too busy admiring his feet to care about that giant head thing.

Suchomimus: Is a dinosaur so ugly, they didn’t even bother to give it a proper name.  A dino like this really needs up to its game by wearing a pair of Super 550’s from Blunderstone.  With their slip resistant soles and durable lightweight design, this dinosaur can command respect even if it can’t get any mates.

Therizinosaurus:  This monstrosity looks like an ostrich got caught in a teleporter with Wolverine.  Not that you would ever say so to its face, since it would instantly tear you to bits and eat you.  With a pair of Irish Setter Ashby’s that are heat resistant and resistant to electrical hazards, this thing could be confidently struck by lightning and keep going.

Brontosaurus:  These guys are like the fat friend of the dinosaur kingdom.  Sure, he’ll come to the party, but eat all the snacks.  He definitely needs two pairs of Brooks Ghost 11’s for heavy runners.  The segmented flexible outsole and stretch mesh upper will go well with no doubt would be the dinosaur equivalent of a Hawaiian shirt.

Compsognathus: These little guys would be your pet, if you were constantly worried that your pet might eat your face off.  These guys probably would’ve been comfortable in Keen Newport H2’s for toddlers with one inch heels and EVA midsole.  They’d looks so cute before they tried to eat you!

Velociraptor:  And speaking of being eaten, there’s nothing meaner than these guys.  Plus, considering how they figure out how to open doors, do we really want to make them more dangerous by giving them a pair of Salomon Speedcross 4’s with aggressive lug patterns?  They’re probably aggressive enough!